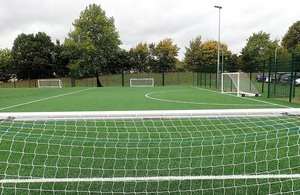 Following the Lionesses’ incredible success at UEFA Women’s EURO 2022, the Culture Secretary has announced that grassroots facilities will be named after the 23 players in and around each of their respective hometowns or places that shaped their footballing careers in honour of their achievements.

"Millions of women and girls have been inspired by the team’s success and honouring their achievements will mean they leave a lasting impression at grassroots facilities across England."
As part of the Government’s £230 million investment to build or improve 8,000 grassroots football and multi-sport facilities by 2025, alongside the stipulation that they must provide access for women’s and girl’s football, the move will cement the team’s legacy for generations to come. This will support the FA’s ambition for the tournament to create half a million extra opportunities for women and girls to play football.

£25 million has already been invested over the last year in grassroots facilities across England, Scotland, Wales and Northern Ireland with more than 170 facilities delivered by the Football Foundation, in partnership with the Premier League and the FA.


Culture Secretary Nadine Dorries said:
"The Lionesses have enjoyed amazing success in a record breaking tournament - selling out all of their matches, with over half a million fans at games throughout the competition.

"Millions of women and girls have been inspired by the team’s success and honouring their achievements will mean they leave a lasting impression at grassroots facilities across England."

The Government continues to support the growth of women’s and girl’s football and driving up participation in the sport.

Working alongside the FA, the Government is determined to achieve their ambition of equal access to football for girls in 90% of schools by 2024, and the £320 million PE and School Sports Premium School Sport and Activity Action Plan will help more girls to take part in sport and physical activity.

During the pandemic £2.9 million in grant funding was provided through the Sport Survival Package to the Women’s Super League and FA Women’s Championship to cover essential costs and allow the completion of their seasons. This was part of the unprecedented £1 billion package to ensure the survival of the grassroots, professional sport and leisure sectors during the pandemic. The staging of EURO 2022 has also been supported with £4.6 million.

In addition, the Government listed several high profile women’s tournaments, including the Women’s FIFA World Cup, and the UEFA Women’s EUROs as events of national significance. This means they will now have greater opportunity to be shown on free-to-air television, increasing awareness of the women’s game, providing greater commercial opportunities and inspiring more young girls to take up the sport.

It has also been announced that a review of the domestic women’s game will launch later this summer, to look at how to grow the game at elite and grassroots level. More details will be set out in the coming weeks.