Grandad And The Girls’ Pace-Egg 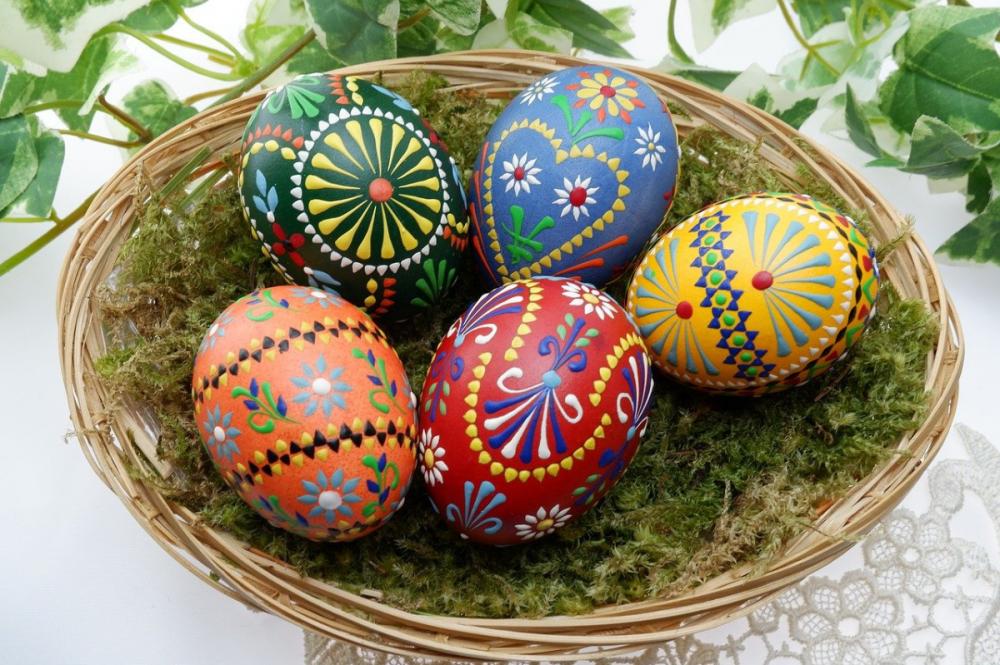 Decorated eggs for Easter. Image by Zauberei
When Grandad was a boy, in the 1870s and 80s, Pace-Egging was common in many northern communities; and where Grandad lived, at Leavengreave, there was a strong tradition of it.

You may be wondering what Pace-Egging is, so I’ll try to explain. ‘Pace’ is an archaic term for ‘Pascha’, i.e. Easter, so roughly translated Pace-Egging is Easter-Egging. Nowadays, all that is involved is hunting for hidden chocolate eggs in gardens, but in Grandad’s youth there was a different tradition.

The Pace-Egg was a play, its words handed down orally over a few hundred years, which was performed each Good Friday. It may even date back to the time of the Crusades. By the time Grandad was a boy, it had died out in many places, but certainly not in the Whitworth Valley, which is where Leavengreave is.

I was ten in 1953, when Grandad told me about it. I was fascinated by this tale of St. George, taking on and beating various champions sent by the King of Egypt to challenge him to single combat – the Prince of Paradine, ‘born of high renown,’ ; the ‘bold’ Sir Hector, who ‘made a good collector’; and the marvellous character Slasher, by his own account ‘a valiant soldier’. Then there was the Doctor, who could be recognised ‘by his tall hat and air of activity’, plus Dirty Bet, whose role was to sweep up and collect the money at the end. Grandad, with his phenomenal memory, could recite the play in its entirety, though he’d always played the same role in it every year, bold Sir Hector.

He told me that each Good Friday morning, the boys of the village would assemble – it was always just boys – and go up and down the valley, stopping to perform the play numerous times. People would come out of their houses to watch and listen, and when the play was finished throw coins for the boys to collect. The money was shared between the cast members at the very end.

My imagination was fired. I wanted to put on a Pace-Egg play. I’d never seen one, except in my imagination as Grandad described it. The tradition had long died out, sometime around the First World War. The only drawback was that I was a girl.

Then he said something that has stayed with me all my life. “You can do anything anybody else can do. Don’t let owt stop you doing summat because you’re a girl.”
There was a pause. He continued, “It’d be different, anyroad. Make folk sit up. Aye, why not? You’d have to learn it, mind, and there’s a lot of practising‘ll be needed. I’d have to teach you how to do the sword fights, too.”

A whole new world opened up. Girls never got to do anything exciting. In adventure stories they were always the hangers-on, usually wet, unless they were tomboys. In school we girls had sewing lessons, whilst the boys made models, and found out what electricity is, and such like. (Mind you, being able to sew has been extremely useful in life, so perhaps I shouldn’t knock it too much. It’s just the either/or, the categorisation of what one was supposed to be fit for in life, which was so restricting then. It was more about what one couldn’t do than what one could.)

The first thing was to learn the Pace Egg. I painstakingly wrote down all the words as Grandad, with endless patience, dictated them. Next I set about organising the material properly, as plays were printed. As an example, this is the start of the play as I wrote it :

Enter all the players, who stand in a straight line.

All, in unison: ‘Room, room, brave gallants, give us room to sport,

For in this room we wish to resort.

Resort and repeat our merry rhyme,
For remember, good sirs, it is Easter time’; and so on.

‘I am St. George, who from old England sprung.
My famous name throughout this world have rung,’ etc...

I was fortunate in having some background in drama. My dad, Jack Mc Gann, was on the stage when he was nine, and had continued to act, off and on. He had been in the same company of players as Gordon Jackson and Jameson Clarke when he was in Scotland, and was somehow related to the Music Hall singer, Nellie Wallace (though that was rarely mentioned by the family, as her act was ‘near the knuckle’.) We were regularly in the audience at the Theatre Royal in Rochdale, and it was there I saw my first Shakespeare, when I was eight. It was ‘The Merchant of Venice,’ and I loved it. Getting all the parts for the Pace Egg sorted was not a problem, but it was very boring to have to write down everyone’s part for them to take away and learn.

I spent most of my spare time at Grandad and Grandma’s anyway, and I had a good group of friends in the neighbourhood, so I was able to assemble a marvellous cast. I, big-headed as an only child can be, decided I’d play St. George. My cousin Lee Crowther was to be the King of Egypt, despite living two bus rides away, so it was a big commitment for her. The twins Glenda and Marcia Bamford played respectively the Prince of Paradine and Slasher; June Long was the doctor, and Audrey Diggle was Hector – and that was it. There was no-one left to play Dirty Bet. All the rest of us would be dressed as boys, but Dirty Bet wore a long skirt, so with great Inspiration Grandad suggested we have a solitary boy in the play, in the only female role. Michael Lamb, grandson of Grandad’s next-door neighbour, Mrs. Wilson, was prevailed upon to take the part, brave lad that he was.

We set to and practised, usually in Grandad’s back-yard. He taught us where to stand, how to declaim rather than speak. And then he taught us how to fight. He and Grandma helped us make ‘swords’ out of old walking sticks, and he showed us how to stand to do the fencing, and what moves to make so as not to hurt each other. Our Slasher, Marcia, was outstanding, coming across as a real swashbuckler. Our bemused parents helped us with our costumes, which was more difficult than it sounds, as we needed to dress as males.


Also by Kaye McGann...
The OrganistMischiefGrandad’s MotherGrandad Gets Banned (Again)Threesome
Now, in 1953 girls wore skirts or dresses. There were no jeans; they hadn’t yet arrived from across the Atlantic. There were no trousers for girls, nor did our mothers wear trousers. They’d gone out with the demise of land-girls after the War. Audrey had an older brother, so was able to commandeer some old ones of his, but the rest of us were stuck. Boys our own age didn’t wear long trousers, they wore shorts all year round. (What with boys’ shorts, and girls’ skirts, winter classrooms were full of children with purple chapped knees.) What were we to do?

My mother dug out some old war-time ‘slacks’, as they were known. I held them up with a large leather belt, and tucked the long legs into wellingtons. I wore a white jumper, and Grandma made a large red cross from crepe paper, which I had pinned across my chest. The twins’ mother manufactured similar outfits for them. Lee, aged nine, as the King of Egypt, wore a long frock, covered by a cloak, and had a cardboard crown on her head. On Good Friday, she very bravely – or foolishly, depending on your viewpoint - travelled from Belfield into Rochdale on the bus, crossed town on foot, then caught the Spotland bus, dressed in her costume. June, only seven years old, wore an oversize black jacket which reached the ground, and a black cardboard top hat, and Michael, another nine-year old, was in a long skirt, a lady’s hat, and carried a broom. We all thought we looked wonderful…….

We began on Arthur Street, near Grandad and Grandma’s house. Only our parents had known what to expect, but we all spoke out as Grandad had taught us, and soon a crowd had gathered round, and their obvious enjoyment gave us increasing confidence. Grandad watched proudly as we strutted our stuff. He was ready to be our prompt, but we didn’t need one. Our amazing gang all knew their parts by heart, and we delivered our lines with a will.

When we’d finished with a song that went, ‘Here come I, Beelzebub, over my shoulder I carry a club. In my hand a dripping pan, I think myself a jolly old man,’ we all chanted, ‘Sweep away, sweep away, play your fiddle we’re all so gay,’ whilst Dirty Bet swept the broom at the crowds’ feet, so they stepped back, and then threw coins.

There were cheers, and a lot of clapping. We moved on to the next place we were going to perform, and some of our audience came too, to see it all over again. Altogether, we did five performances that morning, and then, tired, decided to stop. We trudged back to Grandad’s and counted out the money we’d collected, and shared it out between us, in equal amounts. We were elated! Grandad said he was proud of us all, it was the best Pace-Egg he’d ever seen. We’d thrown ourselves into it, with none of the self-consciousness boys sometimes had when acting. We vowed we’d do it again the following year.

That never happened. Next year was the year of the dreaded eleven-plus for four of our merry band of players, and I, for one, was expected to spend my spare time swotting. In any case, I’d just had my appendix removed in an emergency operation, and capering around sword-fighting would not have been a good idea. That was it. As happened a lot in those days, we all went our separate ways once we started at our new schools, and our old friendships melted away.

My little cousin Lee died some ten years ago now, and I don’t know about any of the others. I hope that if they’re still around somewhere they’ll have the same fond memories I have of that Easter, and also of Grandad, who believed in us.

Our Pace-Egg play remains in my mind as one of the highlights in my life, and it could only have happened because of my marvellous, wonderful, unique Grandad.