First Episode
Latest Episode
This series began as one short story about Grandad’s decision to get married again, but somehow has grown, seemingly of its own accord, into a whole series about the life of my Grandad, his friends and family, and the times in which they lived. One of my friends, who has been reading the stories as they’ve been written, said to me it’s an unusual family, as it crosses class boundaries; and I suppose that is true, though I hadn’t before thought of it in those terms. 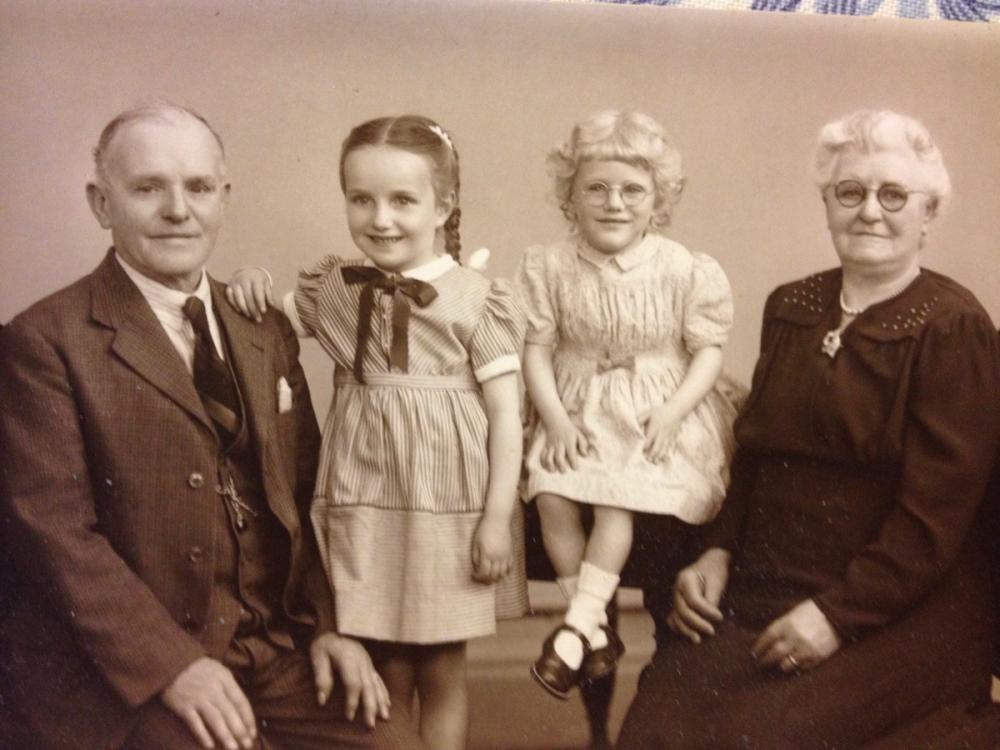 Grandad aged 76, Kaye aged 4, Lee aged 3 and Grandma aged 73.
I have written almost entirely about my mother’s side of the family – the mill-working Lords and the land-owning Watsons - and my father’s family has only been mentioned in passing. Like many families, I think the mother’s side is actually the predominant one for children, as girls tend to cling on to their own mothers, and when they have children of their own, it is to their own family they turn. In my experience, both as a daughter and as a mother of two sons, the father’s parents are somehow ‘subsidiary’ grandparents.

This does not mean they love their grandchildren less, nor does it mean their grandchildren love them less. Certainly I loved all four of my grandparents equally, as I know they loved me. I was lucky to have them all, though some not for as long as others. I was especially lucky also to have my dad’s unmarried sister, Aunt Madge, who was a shining light in my life, a sort of ‘bonus’ parent. Unfortunately, Dad’s family didn’t talk to me about their forebears, nor of their own youthful experiences. (They were a lot quieter generally!) And like most young people, I didn’t ask; and now it’s too late.

This is what I do know, however. Grandpa William Mc Gann and his brother Stephen sailed to America in 1900, intending to settle there. For some reason, Grandpa returned to England, leaving his brother in the States. There are some quite well-known Mc Ganns there, but I don’t know how closely we’re related. The Mc Gann family came over to England from Roscommon in Ireland at the time of the famine, and we’re all related somehow. Anyway, I’m glad Grandpa came back from America, or I wouldn’t have existed!

Granny Emma Mc Gann was born a Tennant. She was quite a character, who didn’t suffer fools gladly. I remember her chain-smoking Park Drive, a glass of neat gin by her side as she played Patience. She was the champion Whist player of Rochdale for many years, and taught me to play cards when I was scarcely old enough to hold a hand of them; and I’ve been playing ever since, nowadays mainly Bridge. Granny could be quite sharp and sarcastic. When she was ninety-two, and the District Nurse said to her, “How are we today?”, Granny retorted,” I am quite well. I cannot speak for you.”

Granny’s younger brothers, Harry and Fred, died at Gallipoli. An older brother had died in the Boer War, and a fourth became an orange-grower in the Transvaal. Her sister Gertrude (Aunt Gertie) married Fred Clough, Captain of the S.S. Manchester Regiment, which went down with all hands in the North Atlantic Convoy.


Also by Kaye McGann...
The Morning AfterMy Friend RosemaryNo Fool Like A Young FoolFriday Night Is Amami NightBlackjack
Another sister, Helen (Aunt Nellie), married someone I knew only as Uncle Piers. I had a shock when I first saw Herr Flick of the Gestapo on the comedy series “ ‘allo, ‘allo”, as he was exactly – and I really do mean exactly – like Uncle Piers in appearance, though thankfully not in character!

Then there was Aunt Dorothy. I had two aunts called Dorothy, and this was Granny’s sister. She was a Matron of a hospital. The first time I saw her was at Grandpa’s funeral, when I was seven, almost eight. I told my mother afterwards that Aunt Dorothy was really a man. That is how she dressed and behaved, and her hair was cropped and straight. I was intrigued, as she was so different from anyone I’d ever met.

Dad was the middle of three children. His older sister Margaret was always known as Madge. Dad, whose name was John, was known as Jack, and his younger sister, another Dorothy, was known as Dolly, though she decided to use her ‘proper’ name once she was old enough to resent her nickname. She married Walter Williamson, and thus I had two first cousins, Stephen and David. As an ‘only’ child myself, I looked on them more as brothers. Aunt Madge would have been a wonderful mother, had she had any children of her own. Instead, she was a wonderful aunt to the three of us. We were so lucky to have her in our lives.

Grandma Betsy Lord was a large person, plump and cuddly, and she certainly gave a lot of cuddles to me and to my cousin Lee. She did crochet and tatting, cooked and baked, and every afternoon she lay on the chaise longue, read her magazine briefly, then fell asleep for at least an hour. No-one, not even Grandad, was allowed to make any noise until she woke again. She went to West Street Baptist Church twice on Sunday, and also to the mid-week Bright Hour for Ladies, walking the mile each way every time.

Grandad Lord –variously John, Johnnie, and Jack – well, I’ve written extensively about him. Looking back over it, one thing stands out for me: the number of times I’ve written, ‘Grandad decided….’ For instance, in the very first story, ‘Grandad Goes Courting,’ he says, “I’ve decided to get married again.” Later, he says, “I’ve decided who it’s going to be.” In another story, ‘He decided to join the Salvation Army’. In ‘Grandad and the Baptist Minister’, ‘He decided he would attend services there, so as to meet her’.

Then there’s ‘He decided to go back to work after retiring’. He ‘decided’ to walk to Earby in the worst winter on record. He ‘decided’ his cousin Millie would be housekeeper for Grandma’s Cousin James; he ‘decided’ he and Grandma would take up cycling, and that they’d make and sell ice cream, followed closely by him ‘deciding’ he preferred weaving, so the ice cream business was short-lived. In parlour games, he ‘decided’ which games would be played, and then there was the occasion he ‘decided’ to go to Paris, alone. In his latter years, he ‘ decided’ to try smoking, and to do a silly walk at my wedding reception.

Yes, Grandad certainly knew his own mind, and once he’d ‘decided’ on something, he did it.

This brings me to the last tale in this series. Its title is at the start of this piece of writing – ‘Grandad Decides to Die.’

It was December, 1965, when Aunt Bertha died. She was Grandad’s sister-in-law, the widow of Uncle Jim (see ‘Uncle Jim Pops His Clogs’, passim), and of Grandad’s generation. After the funeral, the family went to the Theatre Hotel for lunch, and Grandad made everyone cheer up, and even laugh, with his funny stories and jokes. Afterwards, though, he was uncharacteristically quiet and subdued, possibly even depressed.

My husband and I were living in Newbury in Berkshire at the time. David’s father and stepmother had moved from Chislehurst to Walmer on the Kent coast. They had an apartment right by the sea, with a long balcony from which they faced the Goodwin Sands, and could watch ships plying up and down the English Channel. In the holidays, we alternated visiting them with going to Rochdale to see my family there. I saw Grandad only infrequently in 1966.

However, he was delighted at the news I was expecting my first baby, and at the prospect of being a great-grandfather. Then I miscarried. My parents said he was devastated, retiring to his room, and seeming to lose interest in anything. He even sold his smallholding, and all his poultry with it. The warning signs were there – but I wasn’t. I was devastated as well. I had been so happy at the thought of the baby I would no longer have, so it was with great joy I found I was pregnant again, not long after. This time my G.P. was taking no chances. Each week I had an injection of progesterone in my hip, to lessen the chances of miscarriage until the placenta had formed. He suggested not telling anyone about the baby until after the twelve week stage. How I wish I’d ignored him!

We stayed at home in Newbury that Christmas and New Year, as I’d been told not to travel, so I didn’t see Grandad.

The next thing I knew was when I got a letter from my mother. You may find it hard to believe, but like many, possibly most, people at that time, we didn’t have a phone. Her letter said Grandad had decided to die. I wanted to go to see him, or at least tell him about the new baby, but another letter followed by the next post to say he was dead.

It had happened like this. One day, he announced to Aunt Margaret that he’d decided to die. Then he told my parents the same. None of them took this seriously. After all, one cannot just ‘decide’ to die, unless one is going to kill oneself – and that was not Grandad’s way. He said that since Aunt Bertha had died, and I quote, “There’s no-one left who remembers what I remember.” He’d outlived his sister and brothers, and his beloved wife Betsy, as well as all his friends. He also said he’d have hung on to see his great-grandchild, but as I’d miscarried, that was it. There was no point waiting any longer.

There is an expression, ‘He turned his face to the wall.’ That is quite literally what Grandad did. He went to bed, turned to face the wall, and stayed there. He didn’t eat or drink. It took over a week for him to die. On his Death Certificate, for the cause of death the G.P. wrote, ‘extreme old age.’ Grandad was just short of ninety-five, not extreme by today’s standards, but rare then.

I couldn’t even travel to his funeral.

They say that no-one is really dead until no-one remembers them, so by that measure he walks with me every day. I hope he’s lived for you in these stories.

My regret is that he didn’t live to see his great-grandchildren, my two brave and strong-minded sons, who are also kind, caring, and thoughtful men. I think Grandad would have been very proud of them. He’d have said, “They’ll do.”

Bringer of fun, laughter, and happiness to so many.