Travel restrictions and current social distancing measures have made it much harder to find new and exciting places to visit. Large queues at studio tours and indoor attractions may not be at the top of any of your to-do lists right now. But did you know that Yorkshire is home to a large number of excellent British TV filming locations?

In this guide, we reveal Yorkshire’s best outdoor TV spots so you can relive your favourite TV moments whilst social distancing and enjoying the beauty and diversity our region has to offer.

Last of the Summer Wine - Holmfirth

The majority of the series was filmed in the picturesque town of Holmfirth. If you go for a wander around the town, it’ll be sure to jog your memory of some key scenes, such as those filmed on Eastergate Bridge in Marsden Moor Estate, which features in many of the episodes throughout the series. Nora Batty's famous cottage and the famous steps outside it are also a must for fans of the show!

Open All Hours - Doncaster
The filming location of the classic sitcom Open All Hours can be found on a gentle stroll up Lister Avenue in Doncaster, where you can find Arkwright's Shop (Number 15) and Gladys Emmanuel's House (32 & 34), all of which are free to view from the outside if you fancy seeing what they look like now!

Skelton-on-Ure for Peaky Blinders
Many scenes from Peaky Blinders were filmed in parts of Yorkshire. For example, Newby Hall in Skelton-on-Ure, North Yorkshire, was the host of many scenes from series one with the garden also featuring in various parts of the series. Newby Hall is a great place for a day out, and its magnificent array of gardens will be sure to make social distancing a breeze. An Adult Gardens pass costs £14.50, with a Child pass coming in at £10.

Happy Valley - Hebden Bridge
The beautiful market town of Hebden Bridge lies tucked away in the Upper Calder Valley and is a surprising backdrop for the rather harrowing crime drama series Happy Valley. When Tommy Lee Royce is on the run, he hides around the town and by the Rochdale Canal.

The Wills 'O' Nats pub, the police station, Overgate Hospice and the garage where Catherine found the body can also be seen on a walk around the town. The juxtaposing contrast between the setting and the topics in this series, will certainly spark emotion in many fans of the show with a saunter around the town.

League of Gentlemen - Marsden
Although the series was largely filmed in Hadfield, Derbyshire, some key scenes were in fact shot in Marsden. For instance, the show’s infamous "Local Shop" was in fact a purpose-built building on Marsden Moor. However the crew burnt it down at the end of series two. The location is still definitely worth a visit for fans of the show, even if you are unlikely to be able to pick up your pint of milk and loaf of bread! 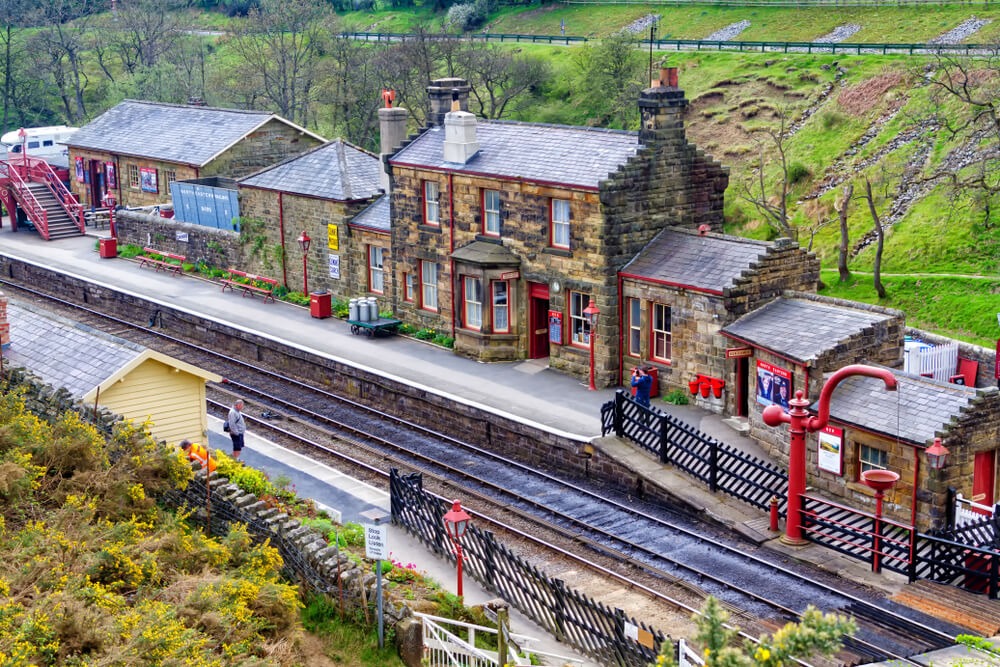 Heartbeat was one of the longest running police dramas to appear on our screens, having run for a period of 18 years. The show is set in the 60s and follows the police force in their efforts to keep the village safe.

The fictional village of Aidensfield was in fact created in Goathland (whose railway station also happened to make an appearance in the early Harry Potter films as Hogsmeade Station). Take a walk around the village of Goathland and you’ll definitely be taken back down memory lane, with the biggest highlight for Heartbeat fans being the Goathland Hotel which is the real-life The Aidensfield Arms.

Where the Heart Is - Slaithwaite
The heart-warming British drama Where the Heart Is really did pull on the heartstrings of many of us during its release from 1997 to 2006. The show followed two district nurses in their hometime of Skelthwaite, which is actually the real-life village of Slaithwaite in West Yorkshire.

The series was also shot in other nearby areas including Meltham and Marsden. Have a wander around Slaithwaite today and lots of things will appear familiar, including real-life Silent Woman Pub, which was the Skelthwaite Arms in the show.

Victoria - York
The hugely successful historical British drama Victoria was filmed at the opulent Castle Howard, just a half an hour drive from the centre of York, making it the perfect location for a day trip in the countryside. The £22 Adult and £12 Child ticket prices may initially seem rather steep, however these include full access to both the house, gardens and grounds and you can easily spend a full four or five hours exploring.