Green And Pleasant: A Celebration Of The Produce Of England

Believe it or not, I struggle to write about English produce. Perhaps my familiarity with my own country means that I’m aware of far more of the produce she offers. Perhaps the richness and variety of her geography and history conspire to make her prodigiously blessed in the production of fine foods. It’s a nice problem to have, though. 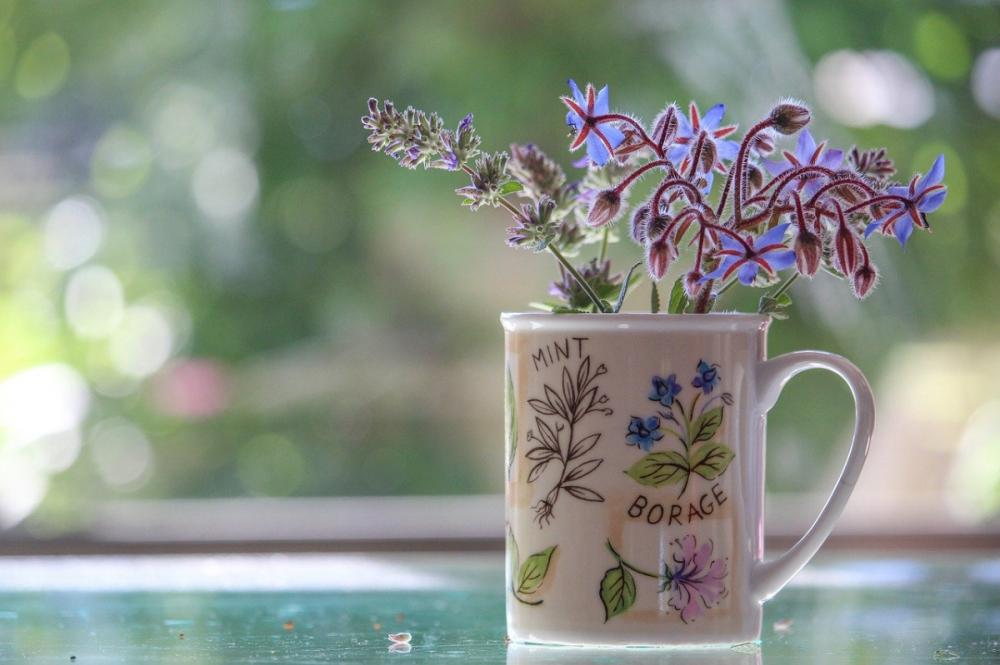 Borage and Mint. Image by dewdrop157 from Pixabay
Just before the first lockdown, I served a series of dinners celebrating great produce from around these islands. There was never any doubt that the England dinner would take place at midsummer. The English summer is a riot of short-lived, amazing foods: salad goods; herbs like borage, watercress, chervil and parsley; strawberries and other soft fruit; cucumbers, named by Escoffier as “the chief glory of the English summer,” and of course our local asparagus. All these owe their abundance to our wet spring, giving way in June to warmer, sunnier weather.

Whereas Ireland, Wales and Scotland have their wild places, most of England is somewhat protected. Indeed, some of that protection is provided by the countries named – geographically, at least. This protected environment gives the climate a gentler edge. Not here the horizontal rain of western Ireland or the storms of Caithness; the English climate is characterised by drizzle, warm summers and soft winds. Its soils are soft, fertile loams, sandy beds reclaimed from the North Sea and ancient mossland. They support root crops and grains and, in the south, open orchards of apple, pear and plum trees. It’s hardly a surprise that gardening is a national pastime: it’s so easy to make things grow here. The “Dig for Victory” campaign of the war years merely tapped into something that was already there, and has continued in local allotment societies ever since.

The fertile plains of Cheshire and Lincolnshire and the Vale of York not only produce fine vegetables, they’re also famed for their rich dairy pasture, producing sweet milk and veal. For beef cattle, we look to the low hills of Herefordshire, Devon and parts of the Yorkshire Dales. The higher hills make perfect grazing for sheep, so Yorkshire and Cumbria are famed for their deep-flavoured lamb. In the eighteenth century, landowners enclosed vast tracts of moorland for game shoots, and Northumbria, Derbyshire and north Yorkshire still produce grouse, pheasant and partridge in abundance.

English history has brought to our gardens potatoes, tomatoes, Mediterranean herbs like rosemary and bay, walnuts and tender mulberries, while our fields and hedgerows are blessed with wild garlic, sloes, elder and sweet cicely. Our national emblem, the rose, was an import from the middle east at the time of the Crusades, but it has colonised our gardens, our hedgerows, our public spaces and intimate moments. The mighty oak, an ancient native, gave us wood for the ships with which we made war, built an empire and transported goods in and out of the country. It has also provided the means to store beer and, in time of shortage, even offered an alternative to coffee.

If you’d like to celebrate England at your table this spring and summer, head for your local independent suppliers. Coming out of lockdown, they need all the support they can get, but they are also the places you’re most likely to find beautiful asparagus grown locally, interesting cheeses from small dairies and meat with the highest welfare standards. What better expression of patriotism can there be than helping one’s neighbours?

I hope you find the menu suggestion below inspiring in planning your own celebration.

Before dinner, it’s got to be English gin, hasn’t it? Seek out something interesting from your nearest distillery, or see if you can find Sing Gin from North Yorkshire, Murphy’s Liverpool Gin or Wolftown Gin from Ulverston. If you don’t enjoy gin, look to one of the craft breweries for something sharp and hoppy or treat yourself to a dry cider. Serve your aperitif with some of the excellent Yorkshire charcuterie from Lishman’s of Ilkley and a bowl of Fiddler’s Lancashire Crisps.

For starter, I can’t think of anything better than steamed, buttered asparagus. It’s so delicious in the early summer that it needs very little doing to it. If you want to fancy it up a bit, add a small poached egg and a drizzle of English summer truffle oil. One wine grape that grows well in England’s cool climate is Bacchus, and its herby aroma makes it a perfect match for asparagus. If you can, give the one from Dunesforde Vineyard a try.


Also by The Aperitif Guy...
Dinner Party Menu PlanningSimply SoupOliver Fozard: Quite a Bashful ChappieA Brief History Of GinLocal 4 Lent
We are surrounded on most sides by the sea, so there’s plenty of scope for a wonderful fish course. Dressed Whitby crab would follow the asparagus well, as would any of the luxury flatfish found in our shallow waters. I would be inclined to look to the rivers, though. Baked or grilled brown trout is a seasonal highlight, or for simplicity and innovation, I’d recommend smoked eel from the Port of Lancaster Smokehouse. It comes cooked, so it’s simply a matter of plating it up with a few salad leaves and maybe a touch of beetroot & horseradish relish. English sparkling wine seems best to recommend with fish, and it adds a sense of occasion to your meal. You could also seek out a dry perry, some of which can hold their own against Champagne.

If you’re a meat eater, you should be looking at locally reared spring lamb or beef. For ease of cooking, go for a cut that benefits from slow cooking: something to can put at the bottom of the oven or in a crockpot and leave for ages; something that won’t spoil if you get caught up in conversation and let it go over by 15-30 minutes. You could stew ox cheek or shin in a gorgeous dark ale from any number of our breweries, or you can roast a lamb shoulder over vegetables with plenty of garden rosemary and thyme.

If you’re a vegetarian, try to stick to simply cooked dishes in spring and summer. Leave the dried pulses and root vegetable curries for the colder months. Broad beans are delicious with fresh herbs and chopped, de-seeded tomatoes. Gem and cos lettuces cook well, either a few minutes on the barbecue or braised with a little white wine. Although not native, there are plenty English growers producing courgettes, aubergines and globe artichokes, too.

We’re a bit early in the season for English strawberries just now, but they won’t be long. If you can’t wait, don’t buy from abroad: they’ll have lost all their taste in transit. Maybe serve a cheeseboard instead, filled with all those wonderful cheeses and chutneys the small producers are making. Alternatively, make a deep, sticky chocolate cake with chocolate from your nearest artisan chocolate-maker and serve it with a small glass of milk stout. You’ll thank me for it.

More about Paul Fogarty, writing as The Aperitif Guy, can be found at blog.theaperitifguy.co.uk