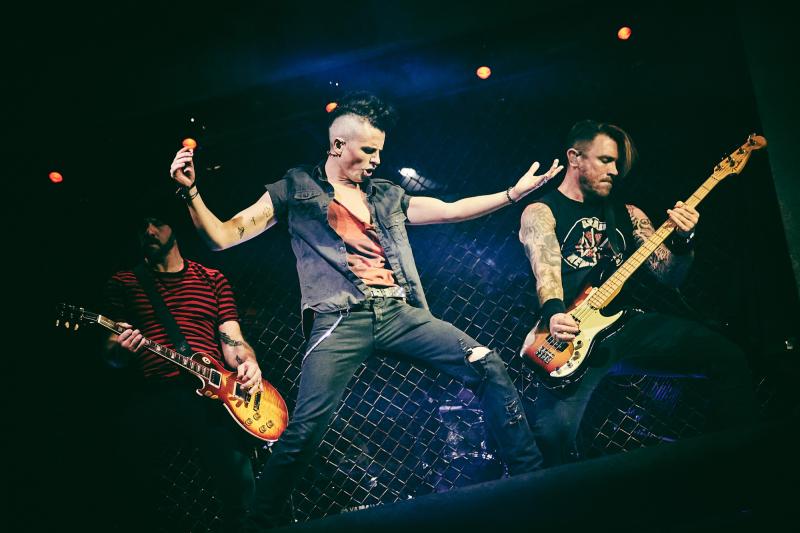 When Green Day’s American Idiot made its début on Broadway in 2010 it was described as “thrilling, raucous and gorgeously wrought.” And when the group’s singer songwriter, Billie Joe Armstrong, secretly prepared for, then took over the part of disenchanted rebel, St Jimmy, he was dubbed ‘a demonic Peter Pan’ by the LA Times.

Both of which go some way to visually describing this unorthodox punk-rock opera, which follows in the time worn footsteps of the likes of The Who’s Tommy, Bowie’s Ziggy Stardust and the Spiders From Mars and Pink Floyd’s The Wall.

Last night it was my turn to judge despite fighting off jetlag after a 28 hour journey. But this amazing tonic was better than any in-flight gin and hit me between the eyes with more efficiency than a custard pie in a fight; amazing, fantastic and as brutal as a glass sandwich.

This unrelenting piece of theatre – it would be sacrilege to call it a musical – never let up for a second as it told the story of Johnny, Tunny and Will growing up in the suffocation of suburban US life, whilst desperately wanting to rebel and explore the reasons for their pent up frustrations and anger.

The album upon which it is based – American Idiot sold 15 million copies – was written as war raged in Iraq and American troops were being slaughtered, once more, conspiracy theories abounded and political egos were being massaged. Somehow an entire generation had no say in how this ‘9/11’ conflict came about but they were paying the price yet again.

They were mad, very mad and Green Day’s Mike Dirnt, Billie Joe Armstrong and Tre Cool captured the moment in the lyrics and music of American Idiot so brilliantly, that their work went on to win a clutch of music awards and entered history’s hall of musical fame.

Bringing this defining album to life on stage was the challenge faced by theatre director Michael Mayer who had to be careful not to create a Broadway ‘musical’ doused in glitter, lest it damaged the band’s street-cred.
And boy did he pull it off.

Dark and brooding the production has minimal dialogue, depending for its success on the album’s original formula; lyrics and the sheer driving force of its ‘in your face’ music.

Boulevard of Broken Dreams, Wake Me Up When September Ends – a meditation on the loss of his father who died when Armstrong was only 10 – were just two of the musical giants that propelled forward, without mercy, one of the smallest but one of the most genuinely enthusiastic audiences I have ever seen at Bradford’s Alhambra.

Halifax boy Tom Milner as Johnny is the punk who finds drugs but loses love, Joshua Dowen as Tunny receives life-threatening injuries whilst engaged in military conflict whilst Samuel Pope as Will retains his sanity thanks to a pregnant girlfriend; he misses the ride but is kept alive in his suburban prison.

They were all looking for answer but discovered that life is never that simple; easy to run but often harder to find what you are looking for.

The three actors were all brilliant, powerful and convincing and Luke Friend as St Jimmy – the boy who has completely lost his way – was edgy, threatening and never took his foot off the gas for one moment. It was an exhausting show to watch…..and I loved every second of this Racky Plews directed/choreographed production.

Be prepared to be shocked; go looking for someone to fill Mary Whitehouse’s shoes immediately but if nothing else, buy a ticket to see this show because it will help people of a certain age to re-connect with youth and, maybe, understand that there was more to punk than a Mohican haircut and Dr Martens; it was a generation’s cry for help and Green Day got that from the start.