H.G. Wells by George Charles Beresford - 1920
Eclipses can be beautiful, however, by definition they often obscure something equally marvellous from view. Within the glittering canon of H.G. Wells (1866-1946), certain works burn brightly, whilst others are left in the literary shadows of their more prominent compatriots. By dint of popularity, specific novels become the cynosure through which an author is best known and most fully understood. Ironically, the cardinal themes integral to Wells and his thinking are never more visible or provocatively potent than when presented to his readers in the perhaps over-looked The Invisible Man (1897).

In addition to proving that good things come in small packages, this slim novella expertly employs the philosophical power of Plato and disseminates the minatory warnings of its author with exquisite clarity and force. For me, understanding its invisible, but perhaps unappreciated power, lies in exploring the issues it addressed and the means by which it did so. The paradoxical unwrapping of its metaphorical bandages reveals far more than the nothing vouchsafed by Griffin, the novel’s protagonist!

Following on from The Time Machine (1895) and The Island of Doctor Moreau (1896), Wells adopted a third-person narrative appproach and repeated the use of what some critics refer to as “Wells’s Law” – rendering a work convincing by instilling common place detail alongside a single extraordinary assumption. Joseph Conrad hailed Wells in 1898 as “O Realist of the Fantastic”. Wells would venture even further into the extraordinary with The War Of The Worlds (1898). However, granting Griffin the power of invisibility, gave Wells the perfect means by which to capture his readers’ attention and illustrate his central concerns perhaps more effectively than in any other of his futuristic novels. A bold claim and one I suspect you will want me to substantiate!

Children’s fiction had become hugely popular in the England of the 1890s. As John Sutherland concluded, Arthur Conan Doyle, Robert Louis Stevenson and Rudyard Kipling “essentially wrote boys’ books for grown-ups”. Invisibility appealed to the storyteller in Wells. He himself said that his novella was inspired by “The Perils of Invisibility”, one of the Bab Ballads of W.S Gilbert, which included the couplet, “Old Peter vanished like a shot / but then - his suit of clothes did not”.

The trope of invisibility in literature was of course not new. In Greek mythology Athena, Hermes, Hades and Perseus had all used the “Helm of Hades” to vanquish their enemies, as it conferred the power of invisibility upon its wearer. The Cyclops Elders presented those who had freed them from Tartarus with a few trinkets of gratitude. Zeus gained his lightning bolt, Poseidon his trident and Hades received the “Cap of invisibility”. This cap or “Helm”, acquired the proverbial meaning for concealing one’s true nature by dint of a cunning device.

Having found a serviceable plot driver, Wells revisited his adolescent acquaintance with Plato’s Republic (c.375BC). This seminal work of the classical philosophy canon, sees Socrates discussing the meaning and nature of justice with various characters. Invisibility is also utilised to help form a key argument. Wells had found the perfect means to illustrate and address the topics he considered to be of imperative importance to a society desperately in need of his sagacious, but always entertaining counsel. This leveraging of Plato’s ethical and sophistical power, combined with Wells’s gifts as science fiction author, give the novella its scintillating and to my mind, uneclipsed, force.

In the Second Book of Republic, Glaucon recounts the legend of “The Ring of Gyges”. This myth is used to posit that if a man were made invisible and could act with impunity, he would “go among men with the powers of a god”. By drawing upon Plato’s use of invisibility, Wells directly linked an exploration of personal morality, societal justice and the nature of accountability, with the perils of scientific advancement. Enabling Griffin to grant himself invisibility, allowed Wells to play out the dialogue between Glaucon and Socrates and show his reader that Socrates had been right all along!

Whilst his readers might not have read Socrates, they would still hear his pronouncements, albeit channelled through Wells. These ethical truths are both structurally and thematically integral to a story guaranteed to hold his reader’s interest. The venerable triumvirate of Plato, Socrates and Wells himself, speak through its plot and themes. 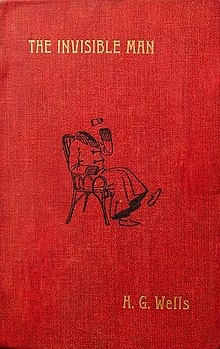 The Invisible Man - First Edition
Freedom and anonymity are for me, axiomatic motifs of The Invisible Man when approached with Plato in mind. Invisibility grants Griffin with apparently boundless freedom. He tells Dr. Kemp that when he perfected his scientific process for achieving such a state via his refractive index method, “My head was already teeming with all the wild and wonderful things I now had the impunity to do”. Without the need to face the consequences of his actions, he is liberated from moral constraints. Wells has him use this freedom to commit a series of increasingly heinous immoral acts including the burglary of a vicarage and the shooting of a policeman - shockingly outrageous violations designed to hammer his point home.

Wells implies that an individual not having to face the consequences of their actions would be inexorably tempted to commit crime. It’s a bleak view of human agency. Tellingly, Griffin’s lust for invisibility is initially a purely scientific impulse, not one of cupidity. Condemning an innocent cat to its post-experimental fate, incinerating his apartments to conceal evidence of his experiments, and then embarking on an ultimately murderous rampage, are the poisoned ramifications of a scientific discovery. Griffin descends ever further into Hades and yearns for a “Reign of Terror” over the general public. As we know, power corrupts. Griffin’s principles disintegrate and his very Being becomes diseased.

In Republic, Glaucon argues that since morality is a societal construct, having no consequences to one’s actions is not strictly immoral. A tenuous argument at best. Plato has Socrates disagree, pointing out that anyone who wore the Ring Of Gyges and simply did that which they wished without fear of the consequences, would become a slave to their own desires. Worse yet, this lack of control would be inimical to their wellbeing. Wells implies this is true for society at large and would logically lead to the breakdown of morality as a credo and ergo, lead to chaos.


Also by Paul Spalding-Mulcock...
The Phone Box At The Edge Of The World – Laura Imai Messina: A Finely Modulated Meditation Upon GriefTurgenev’s Fathers And Sons: Nihilism’s Ineluctable Catalytic Force For ChangeOn The Eve By Turgenev: An Allegorical Love Story And A Plea To A NationContext Or No Context...That Is The Question!The First Men In The Moon By H.G. Wells: An Audacious Literary Experiment
Significantly, Griffin, a symbol of moral turpitude, suffers for his sins and it is a mob of unscientific country folk that both judge and destroy him. Plato had warned that an unjust man would have an unhappy and diseased soul. At no point in the novella is Griffin anything other than bitter, miserable and irredeemably disconsolate. He has sabotaged his own happiness by eschewing his principles and surrendering to his most venal desires. Plato would understand his plight, but not pity it.

Published in 1897, the book was written on the brink of a new century. Enormous scientific advances such as the proliferation of electricity and Darwin’s Theory of Evolution had caused seismic societal changes. Wells places science in the urban landscape and casts it as the harbinger of the new world. Griffin flees to the countryside where lack of erudition and an agrarian economy represent the old world. Thomas Marvel, a country tramp, is overawed by Griffin’s invisibility and utterly unable to comprehend or resist it. In the Epilogue, Marvel’s attempts to make sense of Griffin’s notebooks are doomed to fail as a corollary of his low status and lack of education; the “old” world and its archaic beliefs insulating the “new” from dangerous Faustian scientific discoveries. A powerful theme exquisitely expressed.

Socrates’s conclusion informs Wells’s didactic imperative to urge society to show caution in the face of scientific advance. At a time when humankind’s abilities appeared to be limitless, Wells sought to introduce the notion that humans were playing with scientific fire. Whilst scientific advancement had eliminated many diseases and seen the beginnings of psychology and even birth control, Wells graphically demonstrates what happens when humans meddle with nature or think themselves more powerful than she. Griffin suffers the unintended consequences of his discovery being unable to eat, wear clothes or even remain hidden - a prophetic warning perhaps echoing our modern reservations about AI and genetic manipulation. The misuse of science is intended to shock the reader into recognising the potential for catastrophic consequences for mankind.

Though Doctor Moreau was indisputably and inexcusably cruel, his pursuit of “the plasticity of living forms” was not an attempt to get rich. Moreau retreats from society, unlike Griffin who invades it unseen - again, all the more potent in our modern times. Griffin is a far more powerful exemplar of a misguided and misanthropic scientist at the mercy of self-interest, ruthless rapacity and a disregard for the natural order. His Kafkaesque tribulations and pitiless demise offer a saturnine pronouncement from Wells, as well as urging his readers to foster an antipathetic response to ill-considered scientific advancement. For me, Griffin is far closer to Gyges and the Platonic tyrant than even the barbarous Doctor Moreau and consequently, an even more powerful vessel for Wells’s messages.

Whilst Plato and Socrates may not be ostensibly visible, they are present and they are both concealed within the pages of this superbly formed and entertaining novella. I suspect that Wells had anticipated Harry Potter’s invisibility cloak and presented his two allies with one each, so that they could unobtrusively help his story along. Let’s hope they got to wear some clothes!