Hamilton And Mercedes Cruise To A Comfortable Victory 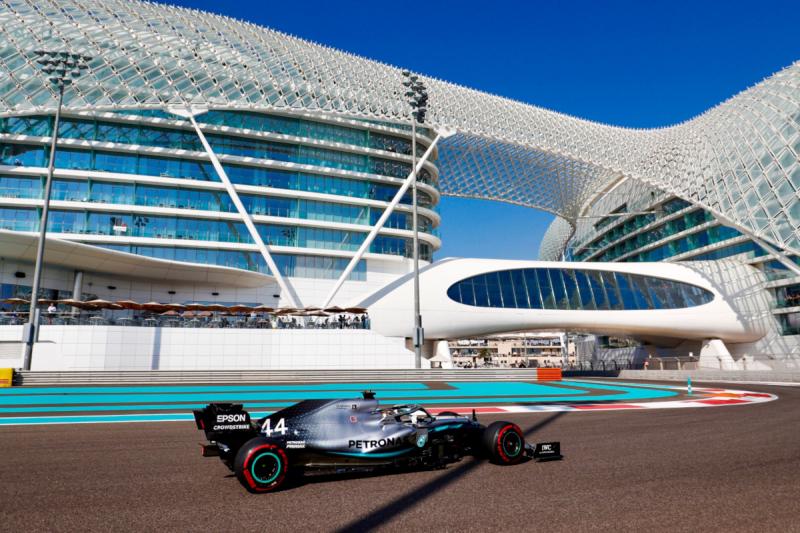 Lewis Hamilton and his mighty Mercedes were in a class of their own in Abu Dhabi
The F1 world arrived at this season’s final Grand Prix around the Yas Marina circuit in Abu Dhabi looking forward to the winter break and it was a dominant Lewis Hamilton who sealed the victory for his Mercedes team, reaching the chequered flag almost 17 seconds ahead of his nearest challenger Max Verstappen. However, there had still been much to race for in this day/night Middle Eastern affair which meant the teams and drivers didn’t just go through the motions whilst dreaming of a break on a sunny tropical island!

Red Bull’s Verstappen and Ferrari’s Charles Leclerc were still battling for third place in this year’s Drivers Championship behind the Mercedes duo of Hamilton and Valtteri Bottas, whilst Sebastian Vettel could still end the season ahead of his young team-mate Leclerc. Vettel had been allowed to arrive in Abu Dhabi a day later than normal following the birth of his third child. 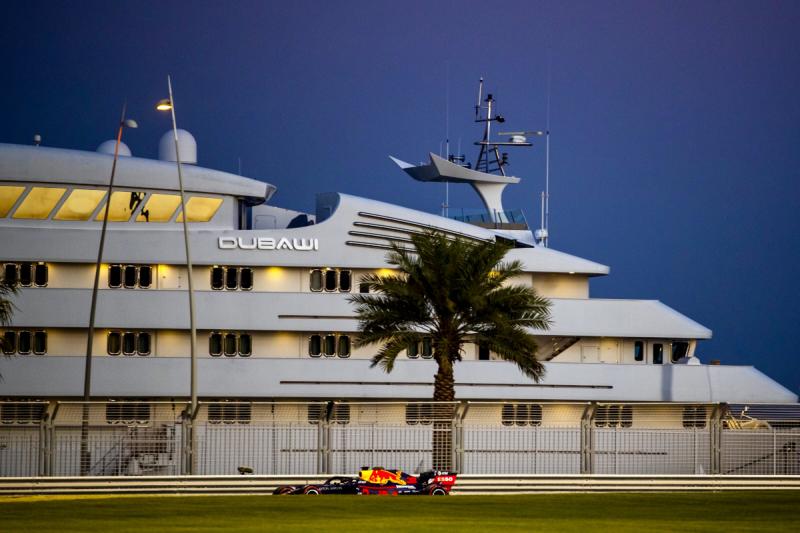 Max Verstappen couldn’t challenge Hamilton and had to settle for the runner’s-up spot
Also, on the Constructors Championship front a midfield group of four teams were also still having their own battle to finish fifth behind Mercedes, Ferrari, Red Bull and McLaren. This may sound relatively insignificant, but the difference in prize money between finishing fifth or eighth is still vast and well worth fighting for.

In any case the word break is very much a misnomer as every team has already long been hard at work preparing their 2020 challengers and most staff will only cease work over the Christmas and New Year period itself. The drivers still have to keep themselves fit whilst attending numerous sponsor events around the world and of course the more successful ones have awards ceremonies to attend and more trophies to collect.

Back in Abu Dhabi the final Grand Prix of the 2019 season marked the end of Robert Kubica’s one year return to Formula 1 as a race driver after recovering from life-threatening rally injuries sustained in early 2011. The Polish driver’s comeback was remarkable and a testament to his willpower and determination in the face of adversity, if ultimately unsuccessful and disappointing for both him and his Williams team. He is however hoping to reach agreement shortly on a test and simulator driver role for either the Racing Point or Haas F1 teams for next year as well as racing in the DTM German touring car championship. 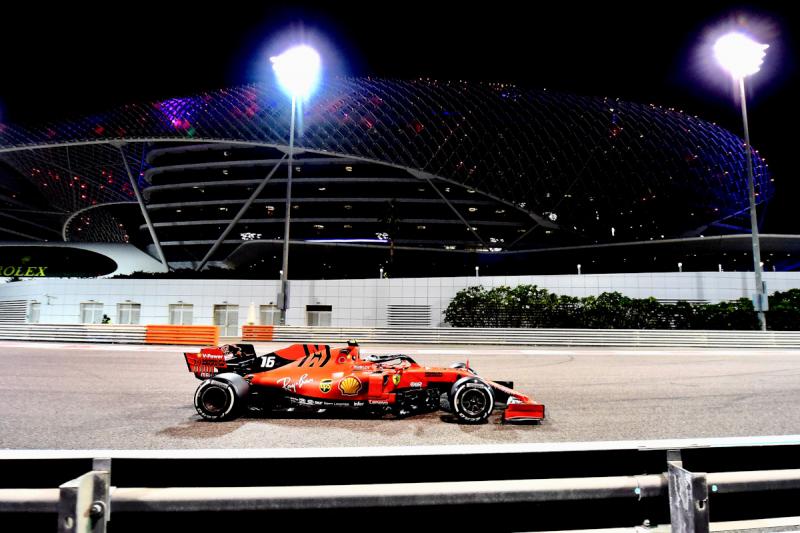 Ferrari’s Leclerc had to settle for third after escaping any fuel related penalty
On Thursday morning Williams made the long expected announcement that its current test and development driver, the 24-year-old Canadian Nicholas Latifi, will step up to partner George Russell next season. Latifi is currently a frontrunner in Formula 2 and his appointment completes the 2020 grid.

There was less good news for Bottas though following his retirement in Brazil at the previous race as his damaged power unit proved to be beyond repair after examination back at the Mercedes engine HQ in Brixworth. As a result the likeable Finn had a new power unit installed for Yas Marina, but this meant he would be starting from the back of the grid come Sunday. Worse was to follow though as an irreparable pneumatic leak in the new unit meant the team decided on Friday evening to install yet another new one. A good job that the Mercedes annual F1 budget is large!

Elsewhere Ferrari team principal Mattia Binotto declared he was happy with his current Vettel/Leclerc driver line-up for next year, but cryptically added that he was “happy” that Hamilton might be available for 2021. Time will tell if that leads to anything or not. 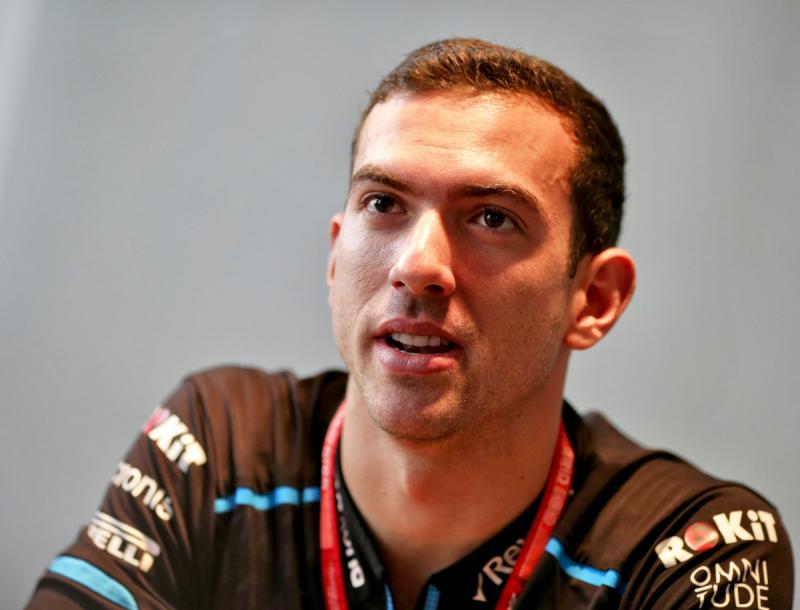 Williams made the long expected announcement that Canadian Nicholas Latifi will replace Robert Kubica next year
When the cars took to the circuit for Friday’s opening free practice session it was Bottas who outpaced Verstappen and Hamilton and in second practice he remained quickest again, ahead of his Mercedes team-mate and the Ferrari duo. On Saturday morning it was Verstappen’s turn to top the timesheets in final practice although both Mercedes cars were less than a tenth of a second behind him, boding well for a close qualifying battle to follow.

Qualifying began at 5pm local time and as the sun set it was Hamilton who set a new track record to claim pole position, his first since Germany back in July. Bottas was the best of the rest, but his power unit woes meant Verstappen inherited his second place on the grid, with the Ferraris right behind. Leclerc missed out on a final attempt to better his time when, embarrassingly for Ferrari, he failed to start his final lap before the end of the final part of qualifying after many of the cars ahead of him had slowed whilst getting ready for their own last attempts.

The Abu Dhabi Grand Prix is one of the most popular on the calendar for fans to attend as they can get a final live fix of F1 whilst enjoying some hot sunny weather as Europe starts to slip into far colder winter mode. This made for a lively atmosphere as the race start approached and a major news story developed after the FIA’s vastly experienced Technical Delegate Jo Bauer issued an official bulletin stating that they had discovered a “significant discrepancy” between the amount of fuel they found in Leclerc’s car compared to what his Ferrari team had declared. This issue had been referred to the stewards for adjudication after the race. 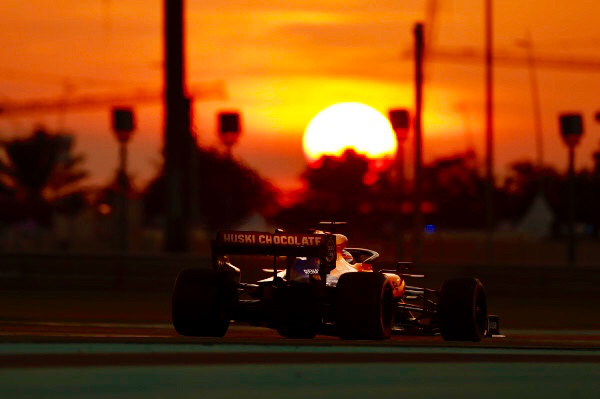 A McLaren flies past as the sun sets on another F1 season
When the clock ticked round to exactly ten past five the 20 cars headed off the grid for the formation lap and when the red lights went out it was Hamilton who led Verstappen and the two Ferraris through the opening part of the lap. The Ferraris were looking feisty though as Leclerc swept past Verstappen and Vettel was all over the back of the Dutch charger.

This year’s champion quickly started to pull clear of the rest of the field out front and on lap 13 Ferrari decided to pit Leclerc and Vettel back-to-back, the former switching from medium to hard specification tyres and the latter suffering a slower stop as he changed from softs to hards.

Meanwhile Hamilton and Verstappen stayed on track, leading the race, but with the British driver already 10 seconds clear. Come the 18th tour the DRS system for all cars was activated after a delay caused by a technical issue, although interestingly the temporary lack of the overtaking-inducing DRS hadn’t made the ontrack action any less watchable.

Come lap 26 Red Bull brought Verstappen in for hard tyres and Mercedes reacted by doing exactly the same for Hamilton just one tour later, with neither driver due to stop again. By the time Bottas, who had being feeling decidedly unwell during the week before the Grand Prix, had also stopped to switch to hards he rejoined the action in sixth position after starting dead last.

Verstappen was determined to pass second placed Leclerc and did so on lap 32, although the young Monegasque driver almost fought straight back. Seven tours later Ferrari again pitted both its drivers back-to-back before they slotted back in in third and sixth positions respectively. Whilst Hamilton was cruising along out front and being reminded by his team to perhaps speed up a little to keep the heat in his tyres Leclerc was almost half a minute behind second placed Verstappen.


Also by Graham Read...
Red Bull Secures The Services Of Verstappen For An Additional Three YearsA Wonderful Early Christmas Present For Ferrari's Charles LeclercBen Stokes Voted BBC Sports Personality Of The Year Ahead Of Lewis Hamilton And Dina Asher-SmithThe Porsche Experience Centre, SilverstoneVerstappen Victorious After An Absolute Thriller In Brazil
As the race approached its conclusion Bottas and Vettel were both flying as the Finn almost caught Leclerc for third position and the German multiple champion closed in on and passed Red Bull’s excellent British rookie Alex Albon for fifth.

So, as the final chequered flag of 2019 flew and the fireworks exploded in the night sky the podium trio were Hamilton, Verstappen and Leclerc, with one of the two other fine British rookies, Lando Norris, taking a fully deserved seventh place finish for McLaren as the best of the rest behind the top three teams in F1. Hamilton also claimed the extra point for the fastest race lap.

We also ended up with answers to all the pre-race questions, with Verstappen finishing third in the Drivers Championship and Renault fifth place on the Constructors front. The post race conversations throughout the paddock though were all about the stewards’ deliberations about Leclerc and his fuel issue and in due course it was declared that he would remain unpunished, if not his team who would have to pay a €50,000 fine. Ferrari’s young protégé was also happy that he at least ended his first season for the Scuderia one place above his far more experienced team-mate Vettel in the Drivers Championship.

And so another Formula 1 season drew to a close in terms of both ontrack and offtrack action, with dreams both fulfilled and shattered in equal measure and with so many highs and lows. The sport should now go relatively quiet in terms of its public profile until the new cars are launched early next year, with two pre-season tests in Barcelona to follow and then the opening 2020 Grand Prix in Melbourne, Australia come mid March.

I hope you have enjoyed our shared travels around the world this year following the F1 pursuit of glory and that you will join me again early next year. As it’s now December I’d just like to wish everyone an admittedly slightly premature Merry Christmas and a Healthy and Happy New Year.