History was made at Austria’s Red Bull Ring this weekend as for the first time ever Formula 1 held consecutive races at the same circuit and it was Mercedes’ Lewis Hamilton who emerged on top after cruising to an unchallenged victory. In total contrast, the race was a disaster for the struggling Ferrari team as Charles Leclerc caused the retirement of both its cars after hitting his team-mate Sebastion Vettel on the opening lap. 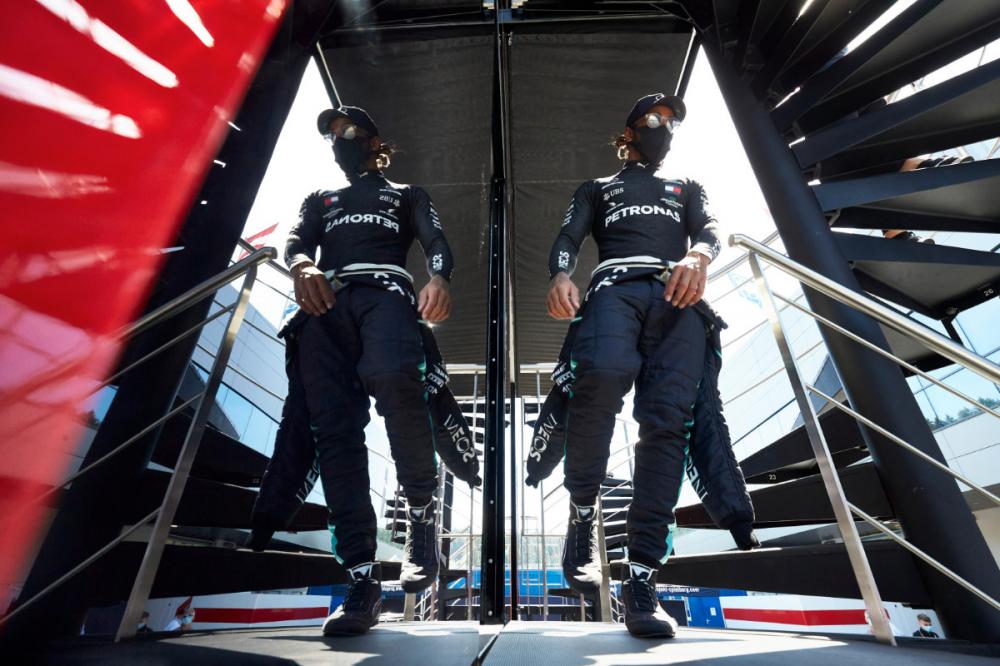 Lewis Hamilton was dominant in both qualifying and the Grand Prix
Just days earlier we had witnessed an incident filled Austrian Grand Prix at the same venue, even if the Mercedes cars had clearly been even more dominant than during the six preceding and highly successful years for the Brackley based German team. Now it was the turn of Austria Mk2, which was entitled the Styrian Grand Prix because of the beautiful Steiermark region in which the track is located. The Formula 2, Formula 3 and Porsche Supercup championships would again be playing their supporting roles.

On the Friday before the race F1’s owners, Liberty Media, made an official announcement, confirming that a Grand Prix of Tuscany will be added to this year’s heavily revised calendar. It will be held at the scenic Ferrari owned Mugello circuit on 13 September and fittingly it will mark the 1000th Formula 1 Grand Prix for the iconic Scuderia team based in nearby Maranello. The season’s first fly-away event, with cars and equipment travelling by plane, was also confirmed, with the Russian Grand Prix in Sochi retaining its original 27 September allocation. 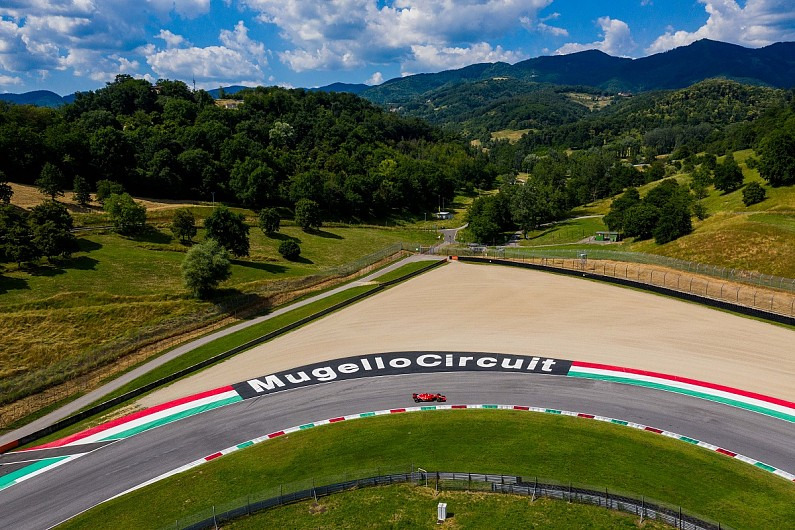 Mugello is a great driving challenge in a very scenic Tuscan location
Work progresses on the October schedule, which may include races at Portimão in Portugal, China’s Shanghai and at Vietnam’s new facility in Hanoi. If China proves impossible, an additional event may be held at the Portuguese circuit instead. November still remains very much to be determined, with the Americas seemingly unlikely destinations and with Imola in Italy and Germany’s Hockenheim on standby if needed. The plan is then to conclude the campaign with a brace of events in Bahrain on 29 November and 6 December, followed by the Abu Dhabi finale on 13 December.

Back at the Red Bull Ring everyone was aware that first time round the two Black Arrows had blitzed every practice session and qualifying and had the pace for what should have been an easy 1-2 finish in the opening Grand Prix before other events fortunately intervened to give us all something far more watchable and entertaining. Also, those brutal kerbs, which all drivers had chosen to repeatedly punish their cars over in search of the fastest racing line and which were driving the sensors on the gearboxes of both Mercedes cars crazy with warnings of imminent doom, were still in place looking to find further victims amongst those we dared to stray their way again.

Looking back, Ferrari’s form had been woeful until Leclerc salvaged something from the weekend on race day, even if Vettel had looked like a man who might not even survive until his forthcoming departure from the team at the end of the season. At least they had some of the updates due at next weekend’s Hungarian event fast tracked to Austria, including an updated front wing and floor.

A week ago Red Bull had sought to provide the most serious opposition to Mercedes until they endured a double retirement. Max Verstappen was understandably very disappointed to have ended his opening race of the year so prematurely and his team-mate Alex Albon was hoping not to have his performance compromised by contact from Hamilton for a third time in four Grands Prix.

So, as the opening free practice session of this weekend’s race approached, it was imperative that Red Bull and Ferrari could challenge Mercedes more effectively before this season risks becoming just a two car intra-team fight. Ditto re 2021 too with the current cars set to be retained until the end of next season before the new regulations arrive with effect from 2022. 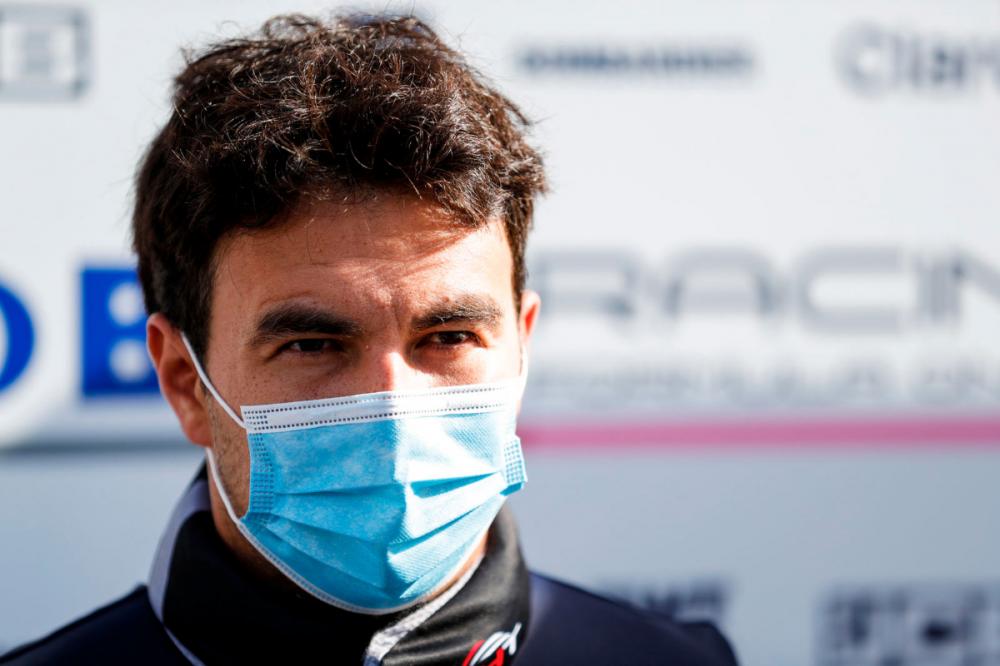 Sergio Perez was thrilled to go fastest in the opening practice session
Racing Point was delighted when its Mexican driver Sergio Perez topped the first practice timesheets in his “pink Mercedes”, with Verstappen the best of the rest ahead of Valtteri Bottas and Hamilton and with both Ferrari’s well off the pace. There was no good news for Vettel about next year either, with Renault having now signed Fernando Alonso again and the Red Bull team principal Christian Horner making it clear that there would be no return there for the German. With Racing Point closing the door too, it seems likely that, unless Mercedes makes an offer, retirement or at least a sabbatical may well beckon.

With a risk of heavy rain and thunderstorms potentially impacting the running of Saturday’s qualifying session It was agreed that, if this happened, qualifying would take place on Sunday morning. If the weather stopped this too, Friday afternoon’s practice times would be used to determine the grid for the Grand Prix and so the session took on additional importance.

Not long after second practice had begun a hefty shunt for Daniel Ricciardo at the penultimate corner left his Renault with damage and the highly likeable Australian with a limp despite being declared fit at the circuit medical centre. Verstappen subsequently went fastest ahead of Bottas and the Racing Point duo of Perez and Lance Stroll, with Hamilton struggling and over 0.6s slower than his team-mate. 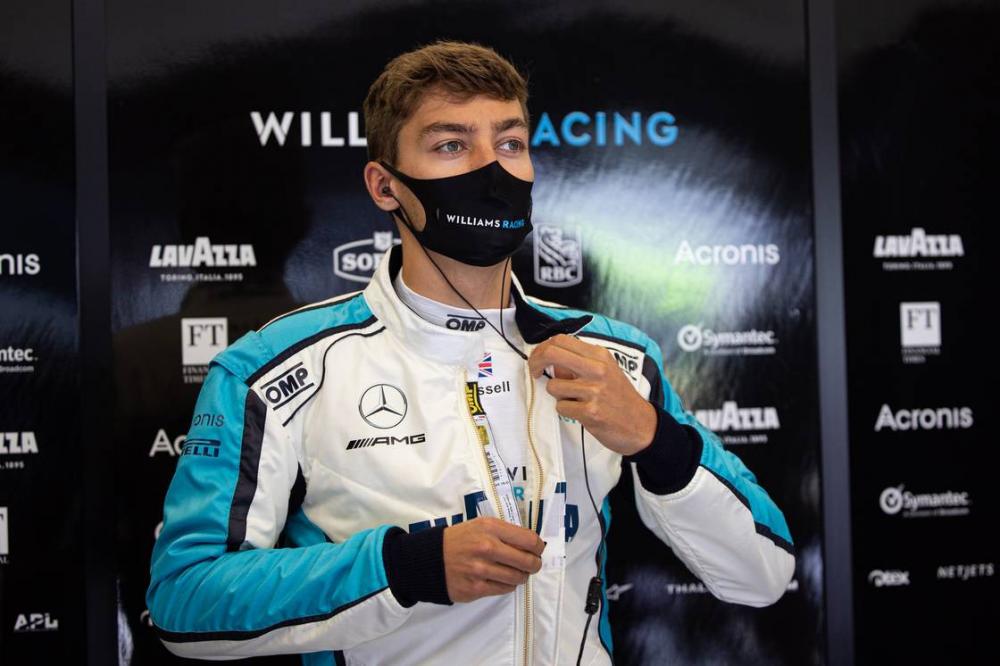 George Russell drove superbly to reach the second part of qualifying for the first time
Come Saturday morning torrential rain and thunderstorms forced the opening Formula 3 race of the weekend to be redflagged and the subsequent final F1 practice period was cancelled. Ongoing heavy rain delayed the start of the qualifying hour by 46 minutes, but, when the action began, Williams’ 22 year old British driver George Russell drove superbly to progress to the second part of the three stage process for the first time in his fledgling Formula 1 career on his way to a sixth row start for the following day’s Grand Prix. With Russell being on the books of Mercedes, this performance must surely have been noted by its head of motorsport and team principal Toto Wolff.

Meanwhile Ferrari struggled again as Leclerc was only 11th fastest and missed the final part of qualifying where Vettel was merely 10th. Challenging times indeed for the Scuderia and its tifosi fans worldwide. Later Leclerc also received a three place penalty for impending AlphaTauri’s Daniil Kvyat. At the sharp end of the grid Hamilton overcame the treacherous conditions, in which a boat would have been more appropriate than a high powered rear wheel drive F1 car, to take a dominant pole position ahead of Verstappen, McLaren’s Carlos Sainz and Bottas who was suffering with a front right brake problem. 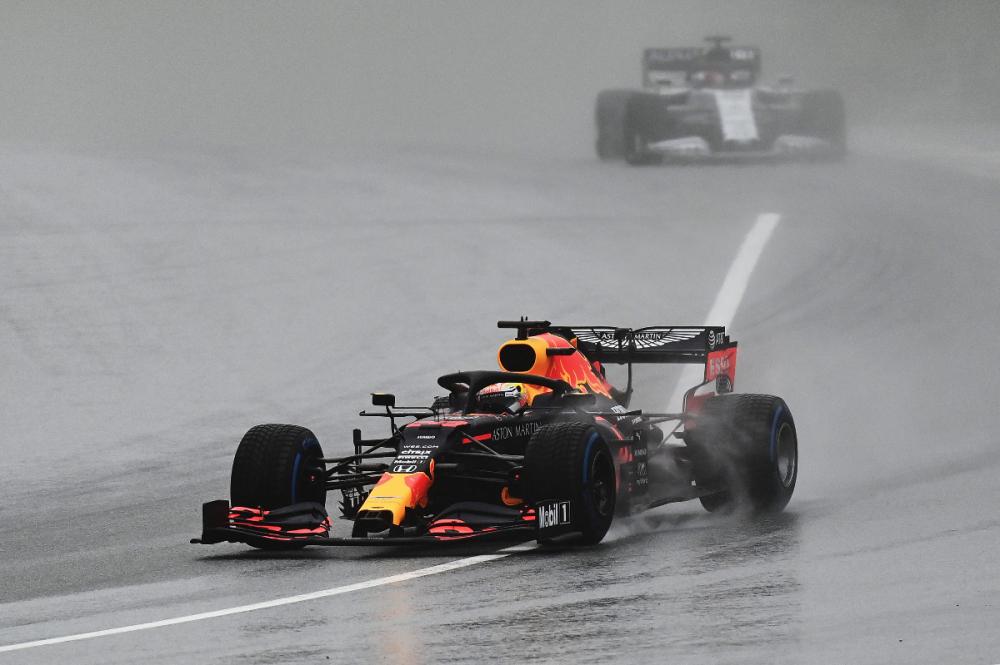 Max Verstappen defied the atrocious conditions to qualify second on the grid
As forecast, the weather was dry and sunny come race day and Hamilton again led a “take a knee” Black Lives Matter protest just before the start of the Grand Prix although, as a week ago, not all drivers chose to join in.


Also by Graham Read...
Racing Point Loses 15 Points And Fined 400,000 EurosHamilton Limps To A Dramatic Silverstone Victory﻿The Flying DoctorThree More Races Added To The 2020 F1 CalendarAnother Dominant Win For Hamilton In Hungary
When the red lights went out and the pack charged off the grid the top four maintained station, but Ferrari’s difficult weekend was about to get even worse as at only the third corner on the very first lap Leclerc charged up the inside and hit Vettel’s car, causing race ending damage for both and bringing the safety car out. Both drivers limped back to the pits and Leclerc was sent back out with a new front wing and a switch to hard specification tyres, but the young Monégasque driver was forced to retire on the fifth tour due to other damage already sustained. Vettel’s car, with his rear wing hanging off, was retired immediately and Leclerc subsequently apologised both privately and publicly to Vettel and the team for his clumsy mistake which caused a self-inflicted double retirement.

By as early as lap six Hamilton, Verstappen and Bottas were running out front and already in a class of their own, with Albon soon the best of the rest. Verstappen was the first of the leading trio to pit and change to medium rubber on the 25th tour and just two laps later Mercedes brought Hamilton in to cover off any threat from the Dutch charger. This left Bottas in the lead, but his own stop soon after dropped him back to third behind Hamilton and Verstappen.

By this stage we were just before half distance and for most of the rest of the Grand Prix the front trio circulated in the same order before Bottas started to close the gap to the Red Bull ahead of him. On lap 66 the Finn, assisted by DRS, swept past Verstappen on the run to Turn 4, but Max fought back, making Valtteri undertake the same manoeuvre on the following tour and this time it stuck.

As the chequered flag neared several drivers running in the top ten sought the additional point on offer for the fastest lap of the race and the honour was earned by Sainz. For a second week running his team-mate Norris finished on a high too, climbing from seventh to fifth on the final lap and finishing behind fourth placed Albon and ahead of Perez who had performed far better than in qualifying. 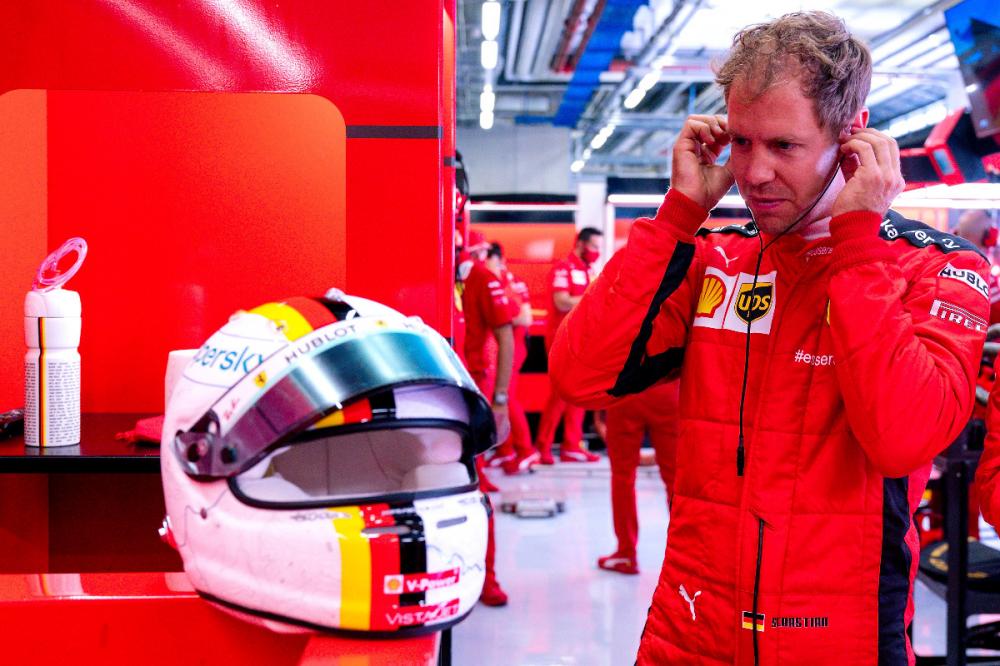 Tough times for Sebastian Vettel, unsure about his future and taken out on the opening lap by his team-mate
So Mercedes notched up its first 1-2 finish of the season and the rest of the teams again have a mountain (Austrian or otherwise) to climb to catch them. The hills were indeed alive with the sound of Mercedes music!

Unlike last Sunday afternoon, this time round everyone was soon focussed on packing up, ready for the relatively easy drive east across Europe to the Hungaroring, a great little circuit just outside Budapest. It’s the home of next weekend’s Hungarian Grand Prix and another of my favourite venues to report from. After the long time off due to the pandemic there’s now little rest for the teams as the races come thick and fast.