Hamilton Edges Closer To A Sixth Title In Mexico 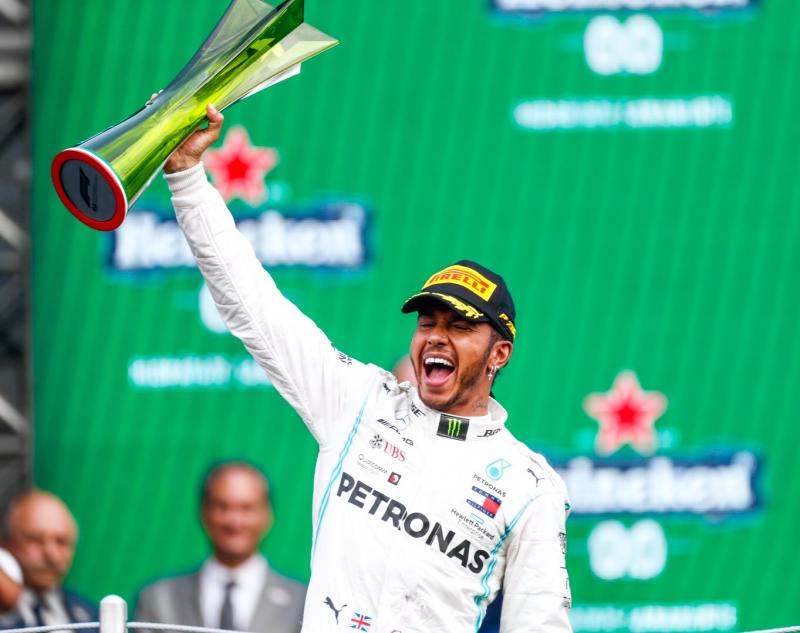 The victorious Lewis Hamilton celebrates in Mexico City
Less than a fortnight after the typhoon impacted Japanese Grand Prix weekend when the long dominant Mercedes team sealed yet another Constructors title the F1 world reassembled on another continent many thousands of miles away for the Mexican Grand Prix, a race which resulted in Lewis Hamilton edging ever closer to claiming a fifth Drivers title for Mercedes in the last six years and his sixth overall after a previous success for McLaren back in 2008. 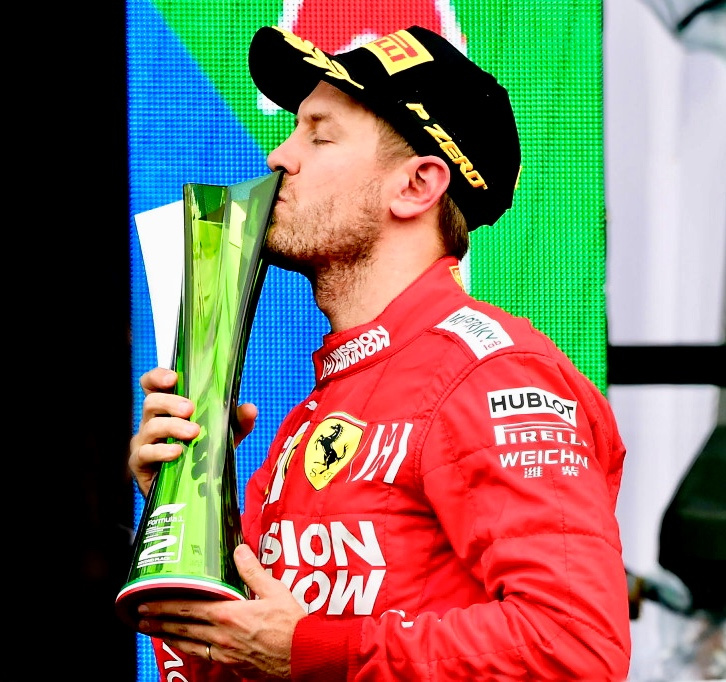 Ferrari’s Sebastian Vettel had to settle for the runner’s-up trophy
There had been controversy during the build-up to the Mexican event as, following an earlier protest by the Racing Point team about Renault’s brake-bias adjustment system on its cars at the Japanese Grand Prix, the French outfit had both its drivers disqualified from the results of that race, costing them nine points. The team was highly critical of the decision, but decided not to appeal, preferring to focus instead on the future rather than revisiting current issues.

When all the cars took to the track for the first time in Mexico for Friday’s opening free practice session at the high altitude Autodromo Hermanos Rodriguez circuit the conditions were slightly damp as Hamilton topped the timesheets just ahead of Ferrari’s Charles Leclerc and Red Bull’s Dutch star Max Verstappen. Later in the day in the second practice period Sebastian Vettel went fastest for Ferrari, followed by Verstappen and Leclerc, whilst Alex Albon crashed his Red Bull car and brought out red flags. 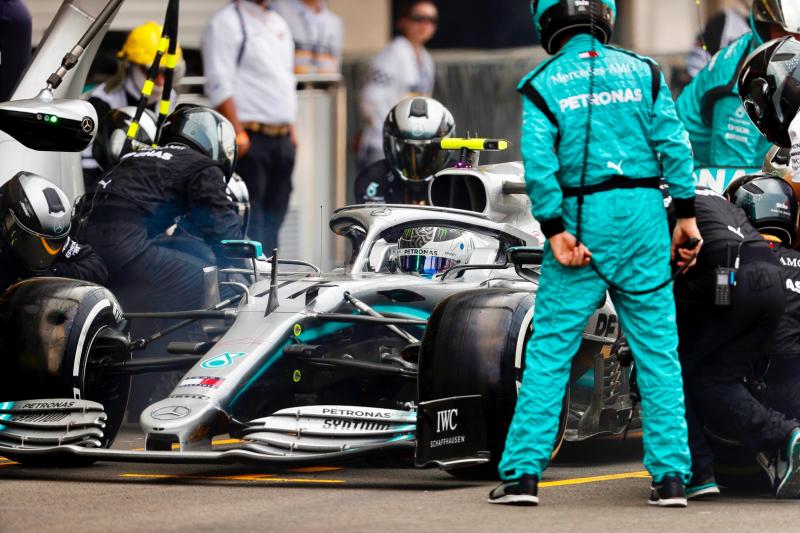 Valtteri Bottas finished third, but his title hopes are still remote
The following day Ferrari dominated the third and final practice session with Leclerc and Vettel on top, clear of the Mercedes pedalled by Valtteri Bottas. However, come the all-important subsequent qualifying hour Verstappen set the fastest time in his Red Bull flying machine to claim pole position for the next day’s race ahead of Leclerc and Vettel, with Hamilton fourth quickest. However, Verstappen later received a three place grid penalty for failing to slow when yellow flags flew after Bottas had crashed heavily at the last corner during the final part of qualifying. This meant the Dutch charger would have to start fourth behind Leclerc, Vettel and Hamilton.

As the start of the Grand Prix in front of a packed 135,000 crowd neared, Hamilton knew that his only remaining challenger for this year’s Drivers title, with four races still to be contested, was his team-mate Bottas, who was going to start three places behind him in sixth position on the grid after Mercedes had made extensive repairs to his badly damaged car and with the Finnish driver suffering from a knee injury. 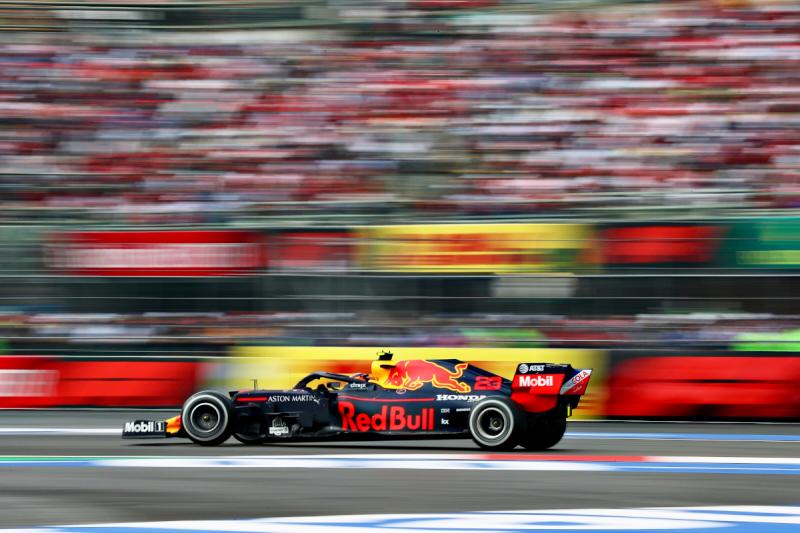 A strong drive to a fifth place finish can only have helped Alex Albon’s chances of keeping his Red Bull seat for 2020
The reigning champion was also aware that, if he outscored Bottas by at least 14 points in Mexico, he would take the title that day. Another welcome, if unexpected bonus for Hamilton was that Verstappen’s qualifying penalty meant he would now be starting ahead of his rival from the Netherlands rather than three places behind, so the omens were good for the British driver on various fronts.

We had an all-red front row on the grid for the start of the Grand Prix and when the lights went out we had a typically frenetic opening lap with Leclerc sprinting into an early lead, Vettel battling with Hamilton and then the latter having a wheel-to-wheel scrap with Verstappen who was still feeling angry about his penalty. Ontrack debris forced a brief early Virtual Safety Car period.

Four tours later Verstappen clashed with Bottas and picked up a puncture, forcing him to make a premature pitstop which was to end any hope for him of a third victory in a row in Mexico. The leading Leclerc then pitted himself on lap 16, but a slow stop meant he rejoined in fourth position. 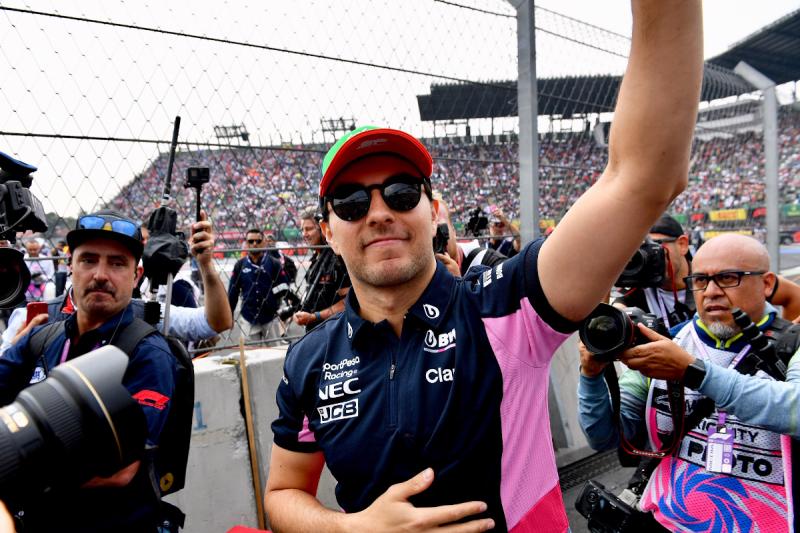 Local hero Sergio Perez thrilled the Mexican fans after finishing as ‘best of the rest’ just behind the top three teams
The key moment of the entire race was on lap 23 when Mercedes brought Hamilton in and asked him to make his second set of tyres last 48 laps to the end of the Grand Prix. The potential champion elect wasn’t convinced, feeling he had been pitted early, but his team convinced him a victory was still possible and with their encouragement went into attack mode whilst also trying to manage the gradual degradation of his tyres.

Come lap 43 Leclerc was leading from Hamilton, but a necessary second pitstop for the young Monegasque driver promoted his main rival to the front of the field. As the race progressed Vettel posed the biggest threat to Hamilton, lapping a couple of seconds behind the frontman and ready to pounce if any opportunity presented itself, but the Mercedes ace kept the Ferrari at bay to the chequered flag.


Also by Graham Read...
Bottas On Top In Austrian ThrillerInspirational Zanardi Severely Injured In Italian Cycle RaceChampion Russell Dominates Again In Canadian FinaleRacy Russell Makes It A Hat TrickFormula 1 Confirms This Season’s Opening Eight Races
An inspired gamble by Mercedes to run Hamilton on a one-stop strategy paid rich dividends at a circuit where the German team was not expecting to do well and questions were again asked of Ferrari’s own strategy as they converted a 1-2 start into a 2-4 finish, with Leclerc just off the podium behind Hamilton, Vettel and Bottas. The now 22 year old rising star did at least pick up the extra point for the fastest race lap. Albon, doing his utmost to retain his Red Bull drive for next year, again drove very well and ultimately ended up an impressive fifth, just ahead of his recovering team-mate Verstappen.

So Hamilton’s pursuit of this year’s Drivers title continues in just a few days time at the USA Grand Prix weekend when he is highly likely to conclude matters. It will again be held at the superb Circuit of the Americas facility just outside Austin, Texas, a venue where Hamilton clinched his third title back in 2015 and one which I can personally vouch for as one of the best to visit on the current F1 calendar.