Formula 1 has made a welcome return to the iconic Nürburgring venue in mid-Germany, which last held a Grand Prix back in 2013, and it was Mercedes’ Lewis Hamilton who emerged with the victory spoils from what was entitled the Eifel Grand Prix. This was the British driver’s 91st victory in Formula 1, equalling Michael Schumacher’s long-standing record. 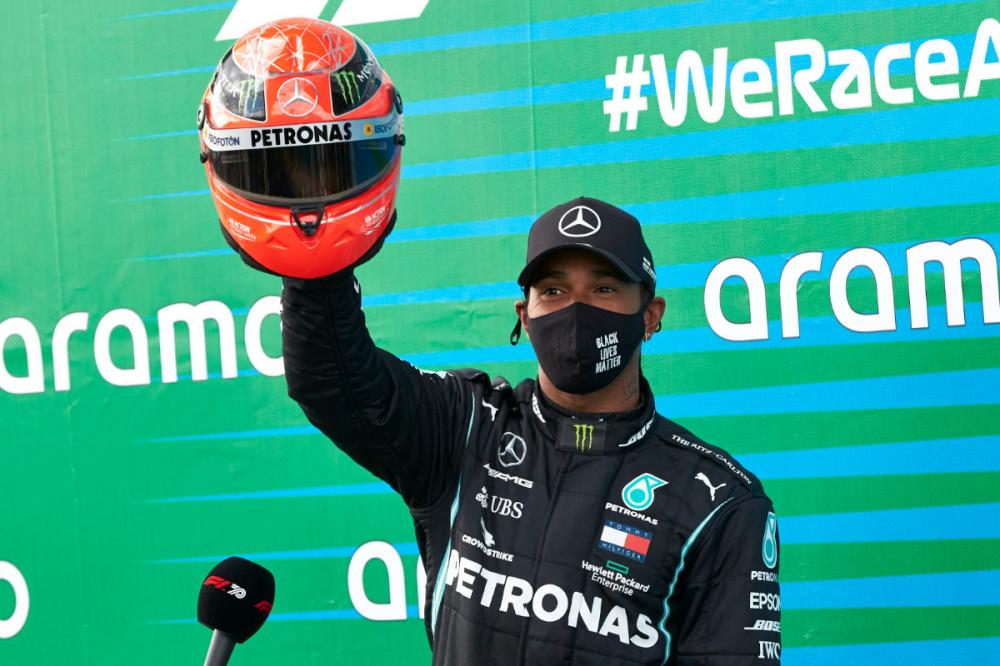 Lewis Hamilton received one of Michael Schumacher’s helmets after equalling his record of 91 wins
To win so many Grands Prix is a significant achievement, although prior to the race Sir Jackie Stewart had explained with some justification his belief that Hamilton could still not be considered one of the sport’s all-time greats like Juan Manuel Fangio and Jim Clark for two reasons. Firstly, what he described as Hamilton’s “almost unfair” car advantage throughout his last seven seasons with Mercedes and secondly, the fact that so many Grands Prix are held every year these days compared to the handful of annual races in the early days, making it so much easier to rack up plenty of victories compared to back then.


Also by Graham Read...
Formula 1 News﻿Lewis Hamilton KnightedHamilton Wins BBC Sports Personality Of The Year AwardF1 News From ﻿Mercedes, Red Bull And AlphaTauriLeeds United’s Marcelo Bielsa
Turning to the venue for this weekend’s Grand Prix, the Nürburgring is of course most famous for its adjacent Nordschleife track which used to regularly hold Formula 1 events. At almost 13 miles in length, with 73 corners and limited run-off in many areas it was both a real driving challenge and extremely dangerous. Sir Jackie nicknamed it as “Die grüne Hölle” (the Green Hell) and it will go down in history as the location of Niki Lauda’s fiery accident back in 1976, the last time it was to host motorsport’s top echelon.

Instead a new, far more modern and safety conscious circuit was completed in 1984 just south of the old one and, together with Hockenheim, became the home of the German Grand Prix or its equivalent on many occasions. The new facility has a spectator capacity of 150,000 and in the past I have seen it packed to the rafters and particularly during the Michael Schumacher era. Sadly the ongoing pandemic precluded any repetition this time round, but upto 20,000 well spaced fans were still allowed access. The title of Eifel Grand Prix for today’s race relates to the region in which the circuit is located, with legal reasons not allowing it to be called the German Grand Prix. 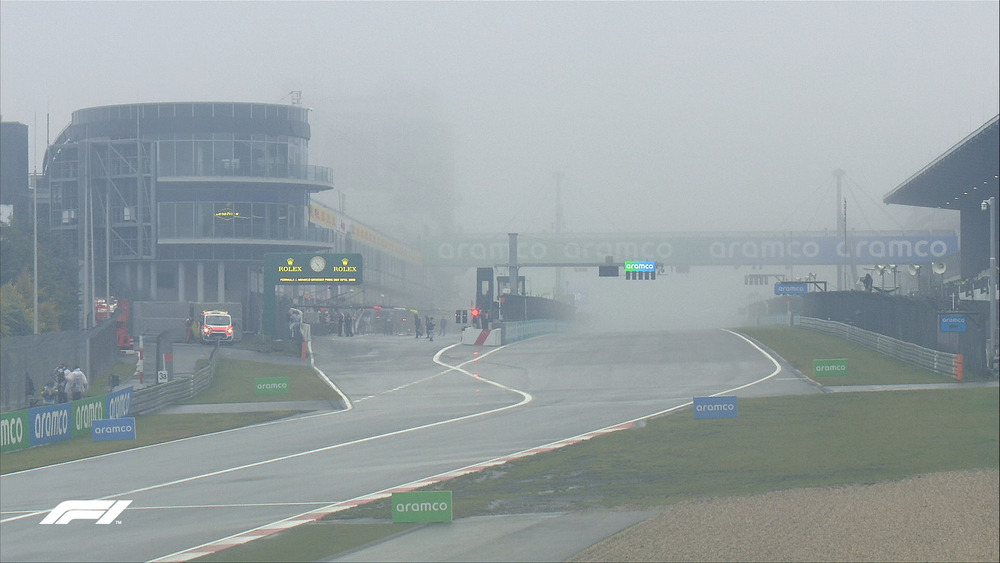 Rain and fog caused the cancellation of Friday’s practice sessions due to medical helicopter flying issues
On the Thursday before the race Mercedes announced that a member of its team had tested positive for coronavirus and was having to self-isolate and this was followed on the Friday by a further member also testing positive and four others having to go into isolation. This didn’t involve either driver, but Hamilton commented that changes would need to be made to avoid any disturbance to their race weekend, with replacement staff being flown in.

Elsewhere around the paddock Sebastian Vettel revealed that he had acquired a shareholding in Aston Martin as he looks forward to racing for them in F1 with effect from next year, mirroring a similar personal shareholding by Mercedes team principal Toto Wolff. Meanwhile Red Bull and sister team Scuderia AlphaTauri were still coming to terms with the surprise announcement from Honda that it would be leaving F1 at end of next year, with both outfits faced with finding a replacement power unit supplier and Mercedes already ruling themselves out, if not Renault. Red Bull’s star driver Max Verstappen admitted though that he “could feel it coming” re the Honda withdrawal to focus budgets on its road car developments.

F1 veteran Kimi Räikkönen, who will turn 41 in a few days time, was also set to break Rubens Barrichello’s all-time F1 record of 322 race starts, although in his usual laid back style the Finn confirmed he had no idea what the number was and wasn’t that interested anyway. A winner of 21 Grands Prix and Ferrari’s latest champion, if back in 2007, he remains in discussions with Alfa Romeo about next season.

Due to the support Ferrari provides to Alfa Romeo the Scuderia has the right to place one of its Academy drivers in one of their cars, the current incumbent being Antonio Giovinazzi. It remains to be seen whether the Italian will be retained for next season or whether Mick Schumacher (son of F1 legend Michael) might be given his first opportunity to race in Formula 1 and perhaps as understudy to the vastly experienced Räikkönen. If Giovinazzi survives, the Ferrari linked Haas team may still be a possible home for the young Schumacher in 2021.

The German driver and Brit Callum Ilott, both 21 and currently first and second in this year’s Formula 2 championship, were thrilled by the promise of testing a current F1 car in Friday morning’s opening free practice session, well, until the weather sadly conspired against them. Schumacher had been allocated Antonio Giovinazzi’s Alfa Romeo and Ilott Romain Grosjean’s Haas, both looking to impress whilst very much warned not to crash the cars. 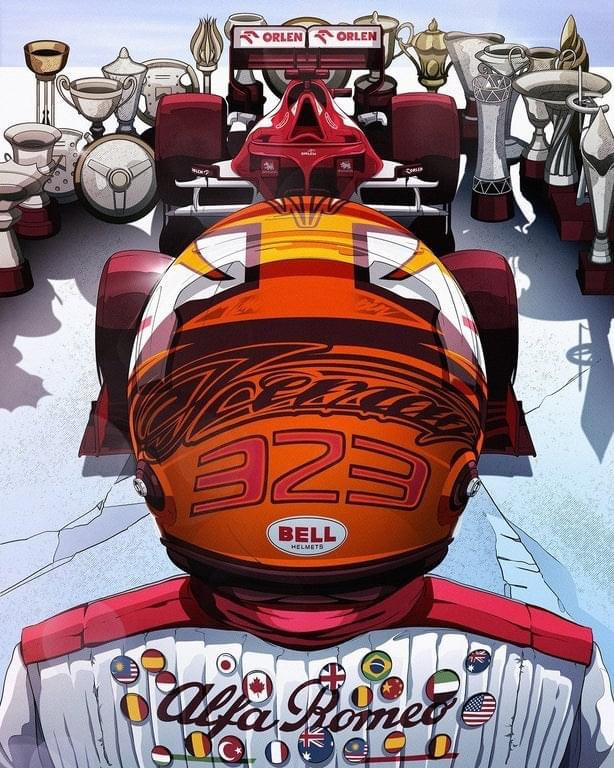 Kimi Räikkönen’s Alfa Romeo team produced this image to mark his record 323 race starts
All of us who know the Nürburgring well were not at all surprised though that it was very much anorak and beanie hat weather as the opening free practice period was due to begin, but the cars were not allowed to take to the wet track as the fog near the circuit did not permit the medical helicopters to fly to the designated “receiving” hospitals in Koblenz, Bonn or Köln if needed. A shame for young Schumacher and Ilott who were itching to get going and worse followed when the session was subsequently abandoned, but safety has to come first. Any medical emergency transfers by road would have taken longer than the permitted 20 minute maximum time set by FIA rules. The usual yellow camera helicopter was able to fly, but it didn’t need to head beyond the perimeter of the facility. Both drivers were understandably disappointed, but Schumacher felt the time spent integrating with the Alfa Romeo team had been very valuable.

Unfortunately the conditions had not improved come the scheduled start of the second free practice period at three pm local time as the rain continued to fall and there was insufficient wind to blow the fog away. As a result this session was ultimately cancelled too and you had to feel for those hardy and loyal F1 fans sat in the grandstands who had endured all the awful weather to not see a single car ontrack.

To avoid further potential disruption the FIA quickly introduced a revised emergency medical evacuation procedure for Saturday and Sunday in case the bad weather persisted. Any badly injured driver would be transferred by ambulance to a lower altitude helicopter pad three kilometres from the circuit, from where an onward transfer by air should be possible. Obviously everyone hoped such contingencies would not be needed, but it was vital to be prepared just in case.

Come midday local time on Saturday it was dry and sunny for the first and only practice session of the weekend and it was Valtteri Bottas who topped the timesheets for Mercedes ahead of his team-mate Hamilton, Ferrari’s Charles Leclerc and Red Bull’s Verstappen. Racing Point’s Lance Stroll failed to take part though due to feeling unwell with a stomach upset, so the team called up super sub Nico Hülkenberg, who had stood in for Sergio Perez twice at Silverstone earlier this season. The German had been having a late morning coffee with a friend an hour away in Köln when the unexpected call arrived, so he jumped in his Porsche and sped to the circuit in time for qualifying. He had been due to undertake some television work for German television station RTL on race day, but actually taking part was a far more attractive proposition! 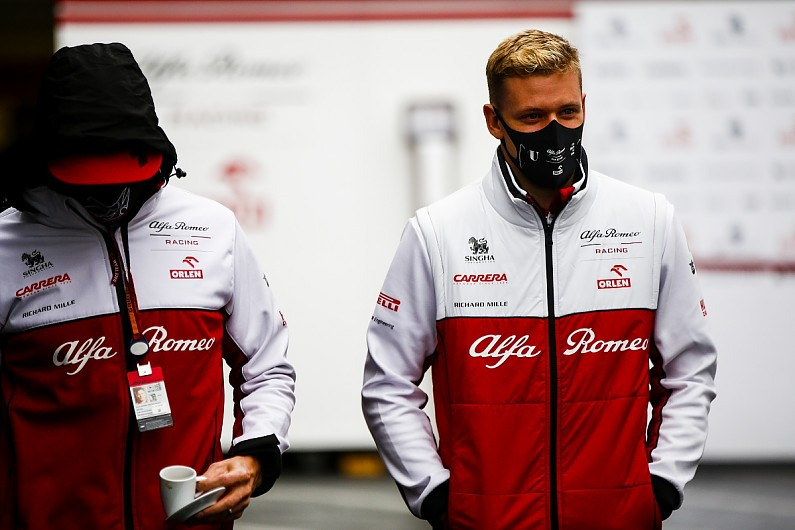 Mick Schumacher (right) was disappointed Friday’s bad weather ruled out his F1 practice session debut
The conditions remained dry, if cold for qualifying and Mercedes continued its 100% record of taking pole at every race this year as Bottas again led the way, followed by Hamilton, Verstappen and Leclerc and leaving the championship leader in one of his grumpier moods when things don’t go his way.

There had been a fear of more rain and fog for Sunday’s Grand Prix, but the weather gods blessed the circuit with another decidedly chilly but mainly dry day. It’s only a short sprint down to the opening righthand first corner, but it has a downhill braking zone which makes it so easy to run wide. When the red lights went out Hamilton made an excellent start to immediately overtake polesitter Bottas, but as they swept through Turn 1 he understeered wide, pushing Bottas even further off the track before the Finn fought back to regain the lead.

As Bottas, Hamilton and Verstappen pulled clear at the front of the field Renault’s Daniel Ricciardo battled with Leclerc before taking fourth place from the struggling Ferrari round the outside at Turn 2 on lap 9. Four tours later the Grand Prix swung in Hamilton’s favour when Bottas had a big lock-up at the first corner and the multiple champion swept past into a lead he was never to relinquish. Following a brief virtual safety car period to facilitate the recovery of George Russell’s retired Williams car after contact from Räikkönen, Bottas’ day ended in retirement too on lap 18 with a power unit issue, leaving Hamilton and Verstappen as the only probable contenders for the victory.

At half race distance Hamilton had a comfortable six second lead over Verstappen and third placed Ricciardo was already a further 53 seconds adrift, such was the relentless pace of the front pair. The race came alive again though with 16 laps remaining when the retirement of Lando Norris’ McLaren required the appearance of the safety car. This bunched all the cars up and, following a flurry of pitstops, there was a clean restart and Hamilton continued to lead Verstappen, Ricciardo and Perez to the chequered flag. 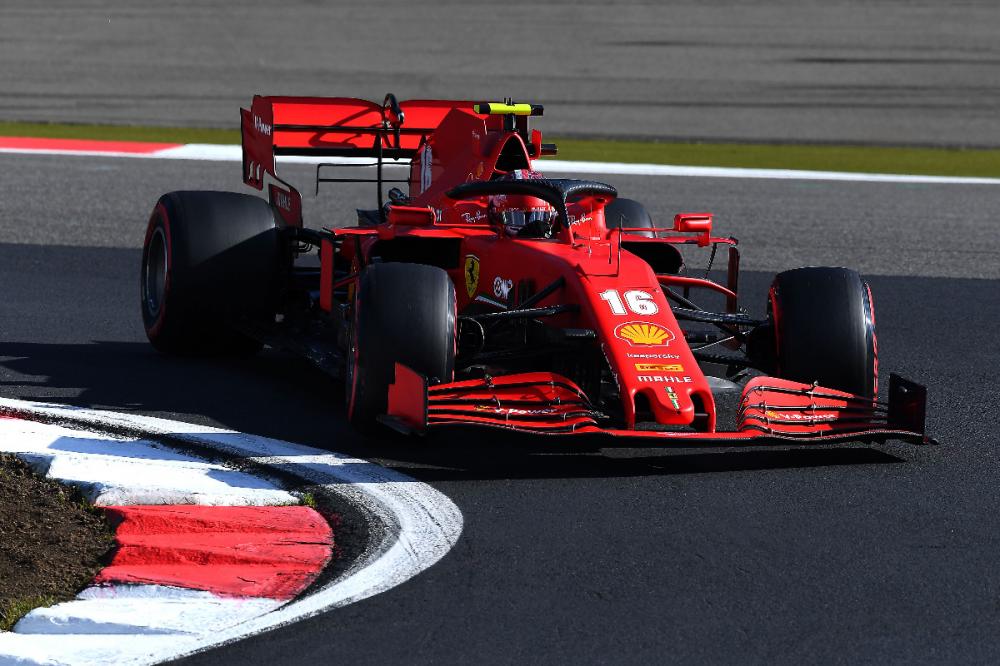 After qualifying fourth Charles Leclerc could only achieve a seventh place finish in the Grand Prix
Verstappen claimed the extra point for the fastest lap on the very last tour, setting a new lap record, and the Renault team was absolutely delighted to achieve its first podium finish since Malaysia in 2011. Their team principal Cyril Abiteboul is now due to receive a tattoo of Ricciardo’s choosing after an ongoing wager between the pair! After qualifying last, Hülkenberg put in a superb drive to finish an impressive eighth for Racing Point.

So Hamilton equalled Schumacher’s win record, extending his championship lead to 69 points with just six races remaining, and it was fitting that Michael’s son Mick presented him with one of his father’s helmets. One of the few bonuses of Formula 1’s need to significantly amend its intended 2020 calendar is that first visits to new F1 venues like Mugello and the return to former ones like Imola and Turkey have been incorporated into the revised schedule and it’s actually felt like a breath of fresh air. Next up in two weeks time comes another track new to F1 in the form of the excellent Autódromo Internacional do Algarve at Portimão in Portugal, so let’s hope the racing there proves to be as impressive as the facility itself.