﻿Hamilton Holds Off Verstappen In A Bahraini Thriller

After a single three-day test in Bahrain for all ten Formula 1 teams the new 23-race season sprang into life today at the same venue with the opening Grand Prix of 2021 and after a thrilling encounter it was Mercedes’ Sir Lewis Hamilton who held off Red Bull’s Max Verstappen to claim the victory spoils. 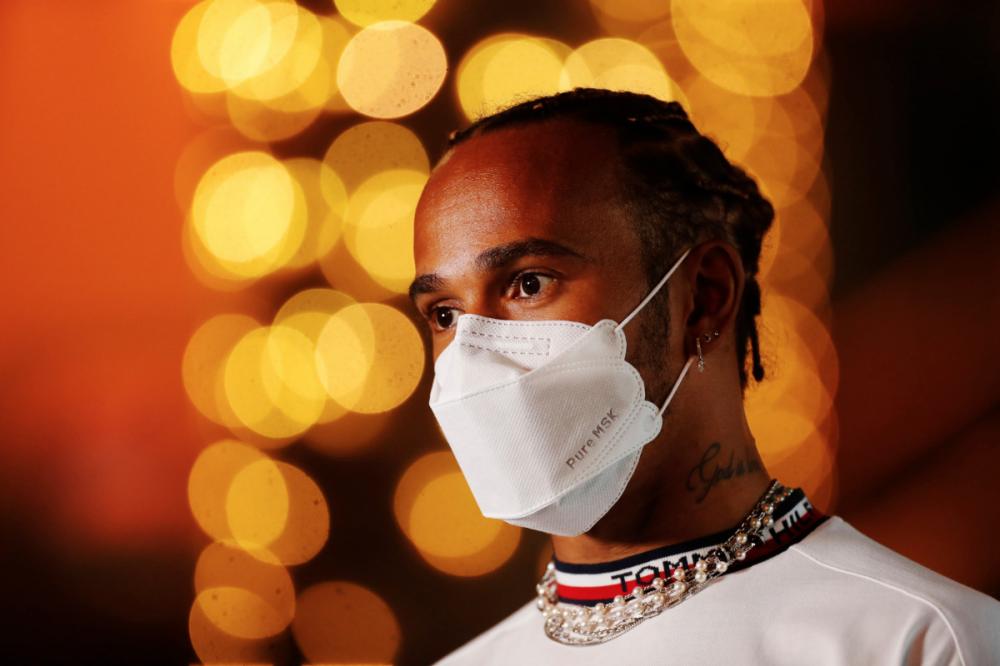 Sir Lewis Hamilton drove superbly to hold off a charging Max Verstappen
The Bahraini race was contested over 56 laps of its main 5.412km Grand Prix circuit configuration, with 15 turns and a mighty 140,000 square metres of run-off areas. That may well sound a lot, but much of it is often sandy and slippery and thus best avoided if at all possible. Being in the Middle East, the track is also surrounded by 1,120 suitably positioned palm trees.

In the days preceding the race weekend the respect in which George Russell (about to start his third season in F1 for Williams and a hot prospect for a potential berth at Mercedes next year) is held was reflected by his appointment as a new director of the Grand Prix Drivers’ Association. The 23 year old from King’s Lynn replaced the IndyCar bound Romain Grosjean, although the latter will continue temporarily with his safety related inputs following his fiery accident last year. Russell will join existing fellow director Sebastian Vettel and the chairman Alex Wurz as well as the GPDA’s first non-driver director Anastasia Fowle, its longtime legal advisor.

The radical idea of trialling Saturday sprint races this season was very much on the discussion agenda in Bahrain, with teams happy with the idea from a sporting perspective, but with some seeking further financial compensation beyond that already offered to cover additional parts usage and the risk of more accident damage, including the likes of front wings. The driving force behind the initiative is to make Grand Prix weekends more entertaining for fans by reducing the amount of free practice and adding a second, shorter race. If agreement can be reached, the intention is to trial the changes at this seasons British, Italian and Brazilian Grands Prix. There would be just one Friday morning practice session, followed in the afternoon by a qualifying hour to set the grid for the new Saturday afternoon event, which would be just 100km long and the result of which would be used to then create the grid for Sunday’s Grand Prix. Saturday’s winner would also earn an extra three points, with two for the runner-up and one for the third place finisher. 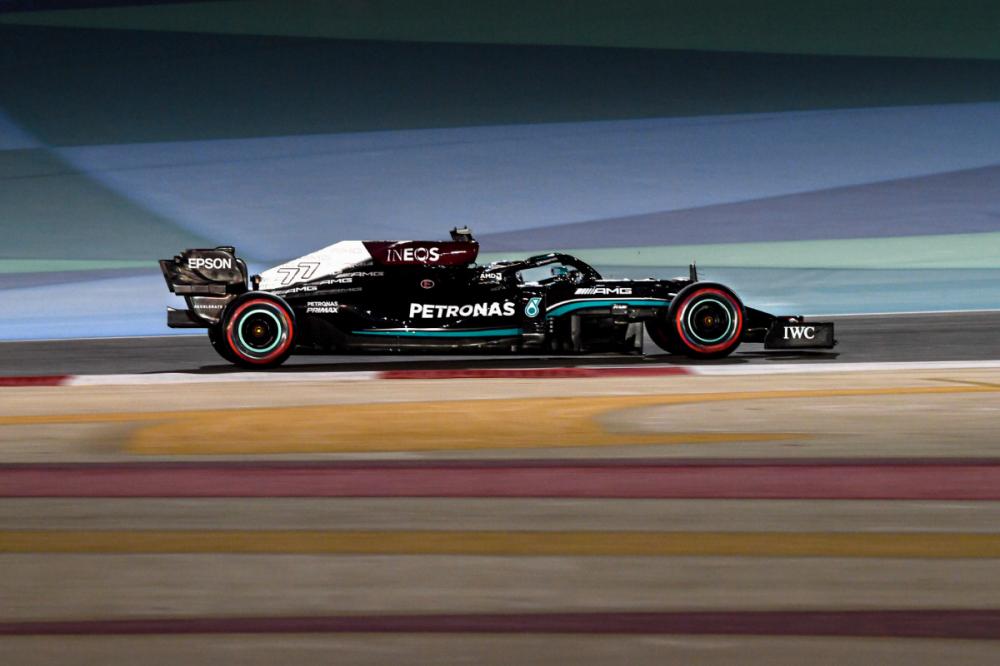 Mercedes’ Valtteri Bottas completed the podium trio and set the fastest lap
After Hamilton had led a pro BLM anti-racism campaign within F1 last year which generated a mixed response from the other drivers in terms of whether or not to take a knee on the grid just before the start of each Grand Prix, this season the F1 authorities are keen to avoid such public displays of a lack of unity being broadcast around the world. As a result the End Racism message has been replaced with a wider #WeRaceAsOne initiative on sustainability, diversity/inclusion and community, with drivers expected to get fully behind it and being allowed to express their support as they individually see fit. This left a sense of intrigue as to just what might or might not happen pre-race come Sunday afternoon.

On the eve of the start of the season there was a coronavirus related scare after two Aston Martin team members tested positive before reaching the circuit and appropriate precautions were taken. As such, the race weekend was able to proceed as scheduled and there was the usual first day back at school feeling, with so many new questions begging to be answered.

Would Mercedes simply dominate again for an eighth consecutive year or would Red Bull at least be better able to take the fight to them after a promising test? Would Hamilton again comfortably outpace his team-mate Valtteri Bottas? Would Red Bull’s new arrival Sergio Pérez fare better against Verstappen than Alex Albon had? Would Ferrari show some sort of improved form and how would new boy Carlos Sainz compare to Charles Leclerc? Just how strong would McLaren be with a Mercedes power unit now onboard again and Daniel Ricciardo lining up alongside Lando Norris after arriving from Renault?

How quick would the returning 39 year old Fernando Alonso be at Alpine compared to his much younger team-mate Esteban Ocon? How soon would Vettel settle into the new Aston Martin after a difficult pre-season test, knowing he quickly needs to show he can outpace Lance Stroll? How will things work out at the uncompetitive Haas team with its two rookie drivers from F2, Mick Schumacher (son of the legendary Michael who made his own F1 debut 30 years earlier) and the Russian Nikita Mazepin? Will 20 year old fellow F2 graduate Yuki Tsunoda from Japan excite us all with his pace and bravery following his arrival at AlphaTauri? Will 41 year old F1 veteran Kimi Räikkönen still be closely matched to the pace of Antonio Giovinazzi at Alfa Romeo and will Russell continue to dominate Nicholas Latifi at Williams? Yes, there are so many fascinating intra as well as inter team battles to be fought out between now and Abu Dhabi in December. 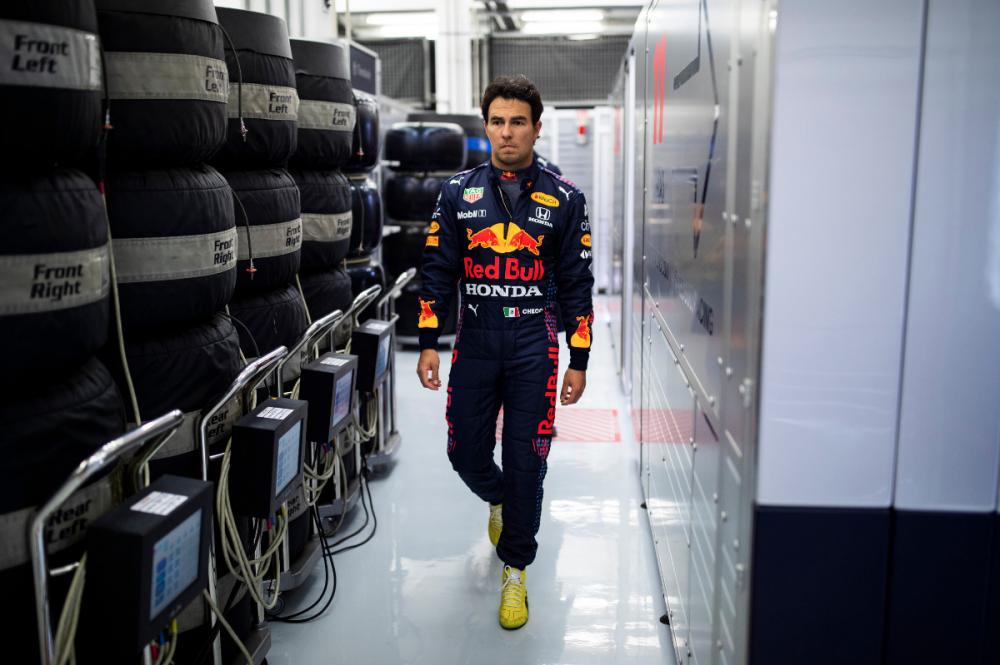 Sergio Pérez finished fifth on his Red Bull debut after starting from the pit lane
With such thoughts uppermost in the minds of most Formula 1 correspondents and fans as well as the drivers themselves when the cars took to the circuit for the opening free practice session on a track which would evolve over the course of the weekend, it was Verstappen who topped the timesheets ahead of Bottas and Norris. Come the afternoon second practice period it was a welcome sight to see a quartet of different constructors occupy the top four places, with Verstappen’s Red Bull ahead of Norris’ McLaren, Hamilton’s Mercedes and the Ferrari pedalled by Sainz. Räikkönnen added to the drama after losing control of the rear of his Alfa exiting Turn 2 and greeting the barrier on the outside of 3 with both ends of his car before limping back to the pits.

The air temperature was a searing 38C (just a tad warmer than back in the UK!) as Saturday’s final practice session began and it was that man Verstappen who again led the way in his RB16B, his quickest time being a mighty 0.739s better than best of the rest Hamilton. Practice is just practice though, but the Belgian-Dutch charger later translated his strong form into pole position for the following day’s race despite carrying some car damage, lapping just under four tenths of a second faster than Hamilton. Bottas and Leclerc claimed a Mercedes/Ferrari second row on the grid. Stroll made it into Q3 as Aston Martin completed its first qualifying hour, but Vettel failed to make it beyond Q1 after coming across yellow warning flags for separate incidents involving Mazepin and Sainz. The German’s woes were later compounded when he was forced to start from the back of the grid after being penalised for not respecting the double waved yellows re Mazepin.

Just before the race-preceding Bahraini national anthem the 20 drivers lined up at the front of the grid in support of the new #WeRaceAsOne initiative and were equally split between those choosing to take a knee and those preferring not to, so no significant change to last season. The start of the Grand Prix was at 6pm local time as the sun set and the conditions were windier and distinctly cooler. There was drama even on the formation lap when Pérez’s Red Bull ground to a halt without power, necessitating the start to be aborted and a further formation lap undertaken. Fortunately the Mexican’s car sprang back into life and he lined up in the pit lane for the start. 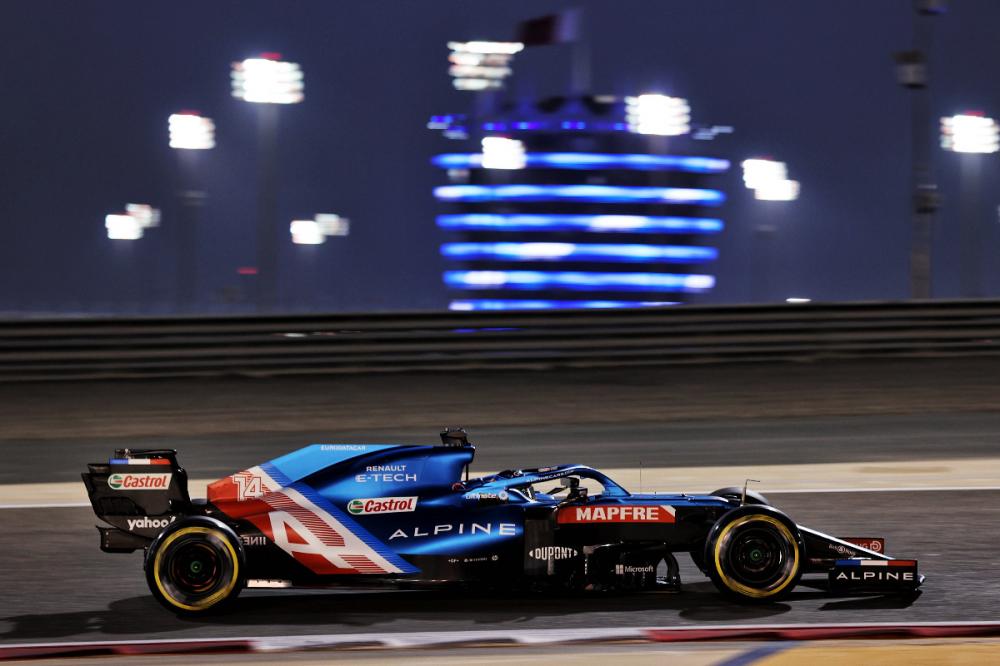 Fernando Alonso’s return to F1 ended in retirement with brake problems
When those famous red lights went out we had a clean start for the leading contenders as Verstappen led from Hamilton, Bottas and Leclerc, but Mazepin’s race lasted just three corners as he lost control of his Haas and headed straight to the barrier on the outside of Turn 3, forcing the new Aston Martin Safety Car to intervene. The latter returned down the pit lane at the end of the third lap and we had a further clean start at the front of the field, although Gasly lost his front wing after hitting Ricciardo’s McLaren and Schumacher had a spin.

After a brief Virtual Safety Car period the Grand Prix returned to full pace as Verstappen still led from Hamilton and Bottas regained the third place he had lost to Leclerc. To their rear Norris was looking particularly racy in his papaya coloured McLaren. Mercedes went for an undercut strategy as they pitted Hamilton for his first stop on lap 14, with Bottas heading down the pit lane three tours later. Verstappen stopped on lap 18, but rejoined in second position behind Hamilton. As the race progressed it soon became just a three horse encounter out front as the leading trio edged well clear of fourth placed Norris.

On lap 28 Hamilton pitted for a further set of hard specification tyres and returned to the circuit in third place behind Verstappen and Bottas. Three tours later Mercedes messed up Bottas’ own second stop as they struggled to remove his front right wheel and he resumed down in fifth position. 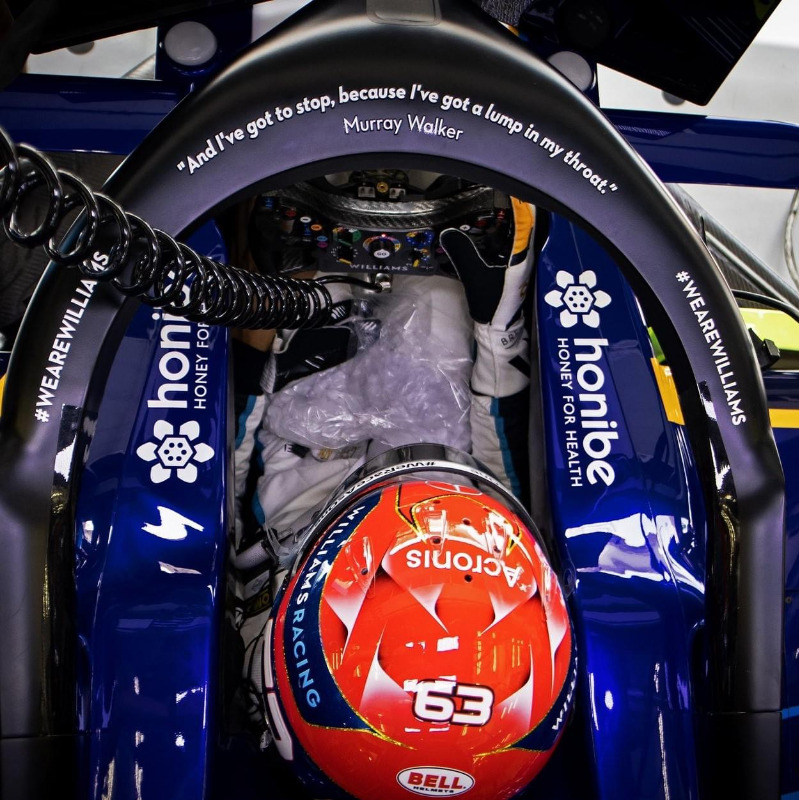 The Williams cars bore a fitting tribute to the recently deceased Murray Walker
The leading Verstappen made his own second stop with 16 laps remaining, switching from medium to hard rubber, and rejoined the action eight seconds behind the new frontman, Hamilton. The Red Bull driver immediately set about reducing this gap and by lap 50 it was down to just a second, setting up a gripping finale to the Grand Prix. With three tours remaining Verstappen edged past Hamilton, but he did so off the track at Turn 4 and so was instructed by his team to hand the position back. Verstappen continued his dogged pursuit of Hamilton, but in the end had to settle for second place ahead of Bottas who claimed the extra point for the fastest lap of the race. Norris retained fourth position to the chequered flag ahead of Pérez and Leclerc. Tsunoda deserves a special mention for his ninth place and therefore points earning finish on his F1 debut and Stroll claimed Aston Martin’s first point in tenth.

As the post race fireworks lit up the sky the F1 paddock began to pack up for the return to Europe, with the next destination on the calendar being in three weeks’ time at the Imola circuit in northern Italy, pandemic permitting. For Hamilton and Verstappen the race no doubt can’t come quickly enough as they look to continue what could become an epic battle for this year’s drivers’ title.