Lewis Hamilton and Valtteri Bottas looked to be cruising gently towards an easy 1-2 finish for Mercedes in the British Grand Prix until a late front left tyre delamination dropped Bottas to 11th and a similar problem for Hamilton left him limping to the line as the chasing Max Verstappen wasn’t quite able to catch him. 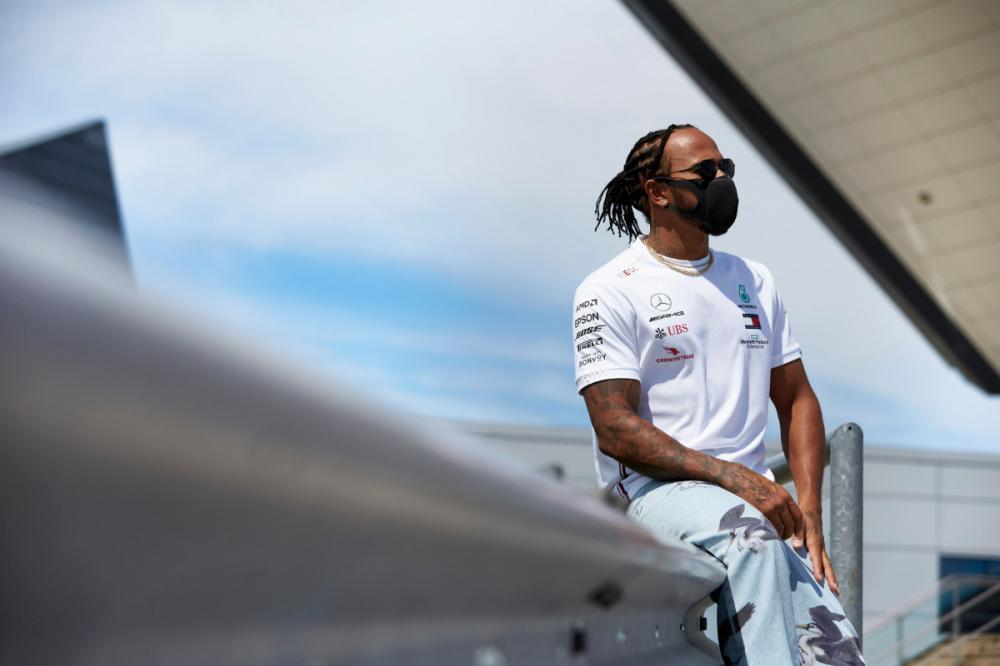 Lewis Hamilton relaxing at Silverstone before his dramatic victory
The whole three day race meeting had to be held behind closed doors, just as at the opening three races of this pandemic delayed season, with no fans allowed to attend and literally only a handful of F1 reporters given permission to be there and even then without any paddock or team personnel access.

On the Thursday before the event there was a major development as Racing Point’s lead driver Sergio Perez had received an inconclusive COVID-19 test result and was desperately awaiting the outcome of a retest, which was sadly to prove positive. This followed a visit to his unwell mother in Mexico since the Hungarian Grand Prix. The second test result meant that, although feeling healthy and in good spirits, Perez was forced to self-isolate and his team announced that due to UK government quarantine instructions he would have to miss this weekend and probably the following week’s 70th Anniversary Grand Prix at the same venue too.

With Racing Point’s “pink Mercedes” being one of the fastest machines on the grid this year, this was a major development and the team advised that it would still be running two cars. The lucky beneficiary was the highly talented German former Formula 1 driver Nico Hülkenberg, who had raced for the Force India previous incarnation of Racing Point outfit for several years and only left F1 at the end of last season after driving for Renault. He had been due to test a Lamborghini GT car at the Nürburgring this weekend, but after what he described as “a crazy and wild 24 hours” he was thrilled to unexpectedly be back behind the wheel of a Formula 1 car and a highly competitive one too. 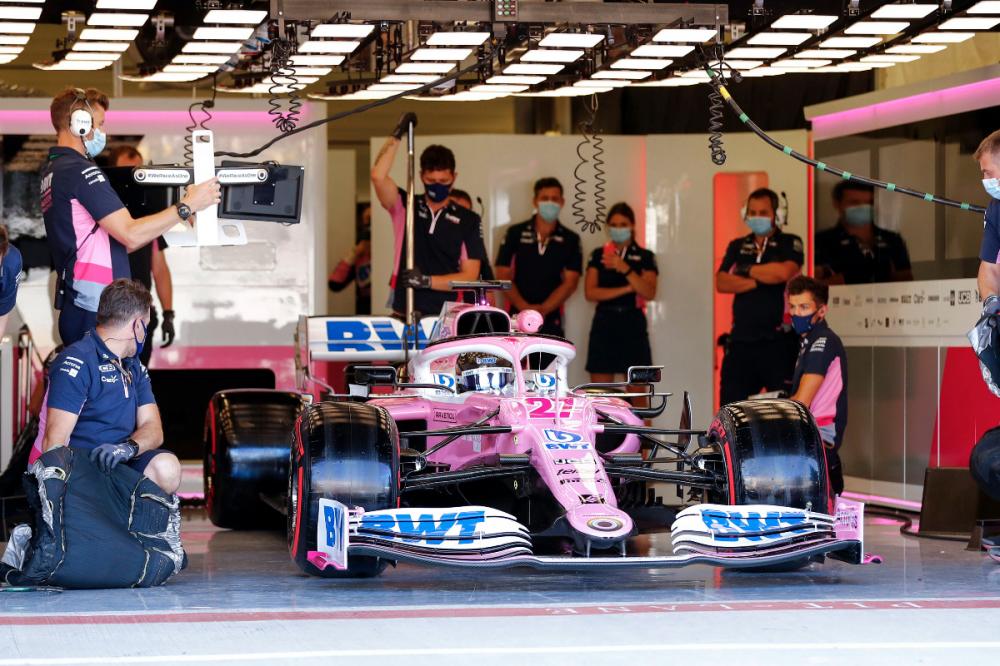 Nico Hülkenberg begins his surprise F1 return for Racing Point
Coronavirus issues apart, Ferrari was not looking forward to the high speed sweeps of Silverstone due to its power deficit. These concerns even prompted Ferrari chairman John Elkann to say that he didn’t expect his iconic team to be challenging for wins again until 2022, with this year’s cars being retained for next year before the new regulations arrive for the following season. The Italian American requested patience from the team’s “suffering” fans, whilst adding the damning comment “the reality is that our car is not competitive.”

Ferrari’s power woes compared to Mercedes and its customer teams meant that not only the Scuderia, but also Alfa Romeo and Haas were downhearted about their chances at the Northamptonshire circuit where sheer engine grunt is so vital to success.

Come the start of ontrack action on Friday morning the unusually hot conditions were expected to help Red Bull close the gap to Mercedes and so it proved to be, as Verstappen led the way in the opening free practice session ahead of Hamilton, Lance Stroll in the other Racing Point and the second Red Bull piloted by Alex Albon.

With the mercury rising to 36C for the afternoon second practice period, it was Stroll who went fastest, with Albon setting the second quickest time before crashing heavily at Stowe corner half way through the session. Behind them Bottas and Hamilton were third and fifth quickest, with Ferrari’s Charles Leclerc surprisingly sandwiched between them. The Monégasque was happy with his car’s qualifying speed, but bemoaned the fact that their simulated race pace was poor in the ill-handling SF1000. His team-mate Sebastian Vettel fared worse though, with his running limited by intercooler and then brake pedal issues. 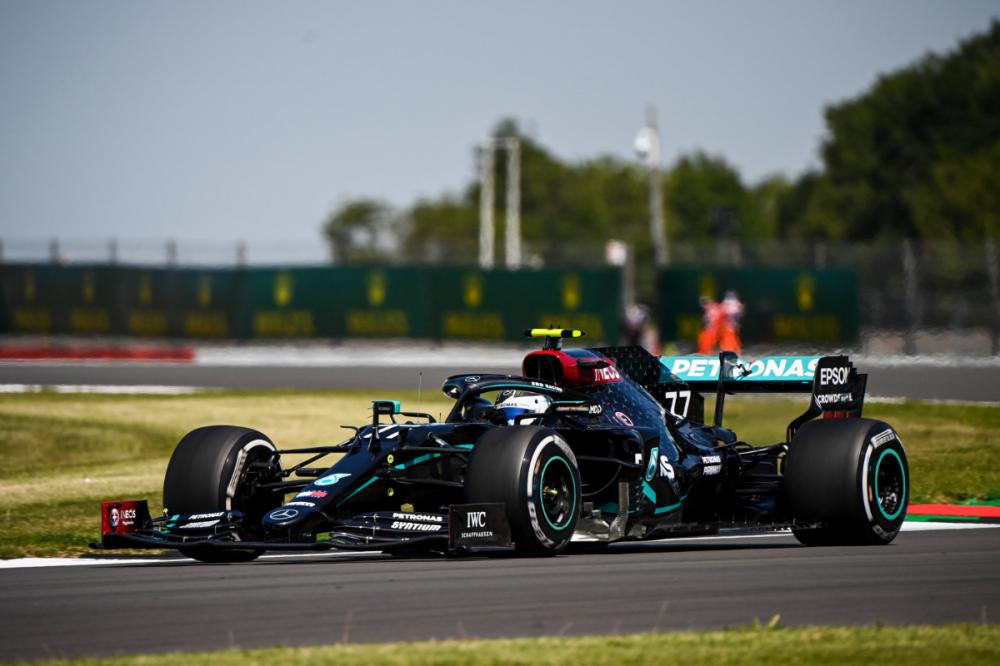 Valtteri Bottas couldn’t quite match his team-mate’s pace
The weather had cooled to more normal levels by Saturday morning and, as anticipated, the usual Mercedes dominance returned in final practice as Bottas and Hamilton showed the rest the way. However, in the subsequent qualifying hour this order was reversed as Hamilton took pole position from his team-mate with a new track record, if spinning off the track at the exit of Luffield during Q2 and forcing the red flags to fly.

Verstappen and Leclerc claimed the second row on the grid for the following day’s Grand Prix, but ominously both were over a second off the pace, with the rest of the field upto more than three seconds adrift, such is the performance differential between the best and slowest in current F1. After qualifying Toto Wolff, the overall boss of Mercedes motorsport and team principal of its Formula 1 team, admitted that their total and ever I ncreasing dominance of F1 since 2014 has “won them no friends” and left them “under attack on every front.” It’s certainly taken away the unpredictability about which team would win at most races over the last six and a half years, which is turning away many casual followers of the sport.

At least 20 year old Brit Lando Norris was delighted to qualify fifth for McLaren, whereas Vettel was disappointed to be down in tenth position, fearing his British Grand Prix weekend couldn’t get much worse, and last minute stand-in Hülkenberg was 13th fastest, if suffering with a sore neck due to the high G forces. The likeable and truly gifted George Russell reached Q2 for a third time in a row in his Williams, but the stewards subsequently deemed the talented young British driver had failed to slow sufficiently when passing double yellow flags and handed him a five place grid penalty, demoting him to the back of the grid.

Having personally been at Silverstone for the British Grand Prix virtually every year since 1992 when our very own Nigel Mansell won in front of a massive crowd on his way to his one F1 world title, it was strange to see the grandstands empty and silent as the 20 cars made their way to the grid for the start of the 2020 version. 28 years later - how that time has flown by! 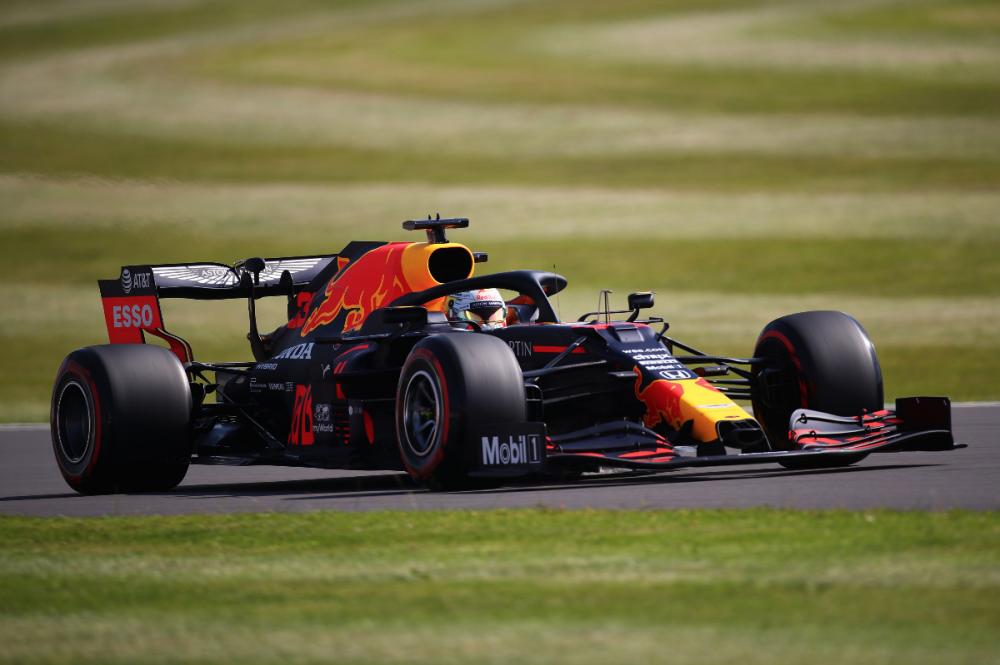 Max Verstappen flies round a pristine, but fanless circuit
It was warm and dry, but with a noticeable wind gusting around the 800 acres of Silverstone as the start approached. The drivers joined together at the front of the grid before the national anthem to repeat the End Racism message, with thirteen of the twenty opting to take a knee, and you had to feel for poor Hülkenberg, who didn’t even make the grid as his car refused to start up in the pit garage.

There was still that usual pre-start excitement though despite the lack of fans present and despite everyone expecting it would probably be just a two horse race for the victory spoils, with the Mercedes duo simply disappearing into the distance out front barring any safety car interventions compressing the field. As the clock ticked round to ten past two the formation lap began and when the red lights went out the Mercedes duo led as Leclerc snapped at the heels of Verstappen.

Well to their rear, Albon made contact with the Haas of Kevin Magnussen at the end of the opening lap, sending the Dane flying out of the race and earning the perpetrator a slightly harsh five second penalty for his behaviour. The safety car had to be scrambled for four tours until the stricken car was removed and following the restart Hamilton and Bottas set about building a lead out front.

The experienced safety car driver Bernd Mayländer was called into action again when on lap 13 AlphaTauri’s Daniil Kvyat had a big shunt at Maggots due to a suspected right rear tyre failure. It took six circulations for the badly damaged car and debris from it to be cleared, during which time we witnessed multiple pit stops as the opportunity was taken to switch to hard specification tyres.

When racing resumed the Mercedes pair re-established a comfortable lead, doing just enough to keep ahead of the threat posed by the pursuing Verstappen and the already more distant Leclerc, and so it remained until with five tours remaining Bottas reported vibration and related visibility issues. 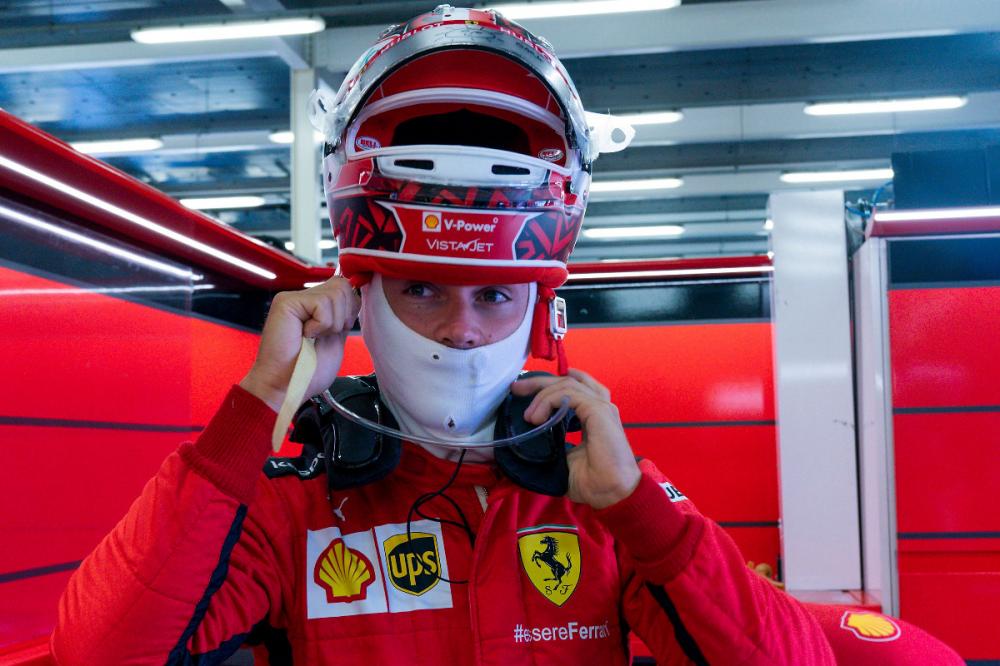 A fortunate podium finish for Leclerc, but he knows his Ferrari must improve
There had been some action in the midfield along the way, but the Grand Prix had been proving to be something of a slowburner. However, on lap 50 of 52 Bottas suffered his tyre failure and Verstappen swept by into second place, as the Finn had to slowly make his way back to the pits for fresh rubber. With Leclerc so far behind, Red Bull reacted by bringing Verstappen in for soft tyres, on which he was then able to set the fastest lap of the race and take the extra point on offer for doing so.


Also by Graham Read...
High Drama As Verstappen Wins In FranceHigh Drama In Azerbaijan As Pérez Wins ThrillerR.I.P. Max Mosley 1940-2021Verstappen Wins And Takes Championship Lead In MonacoThe Pandemic Forces Further F1 Calendar Changes
More drama followed though on the very last tour when Carlos Sainz suffered a similar tyre failure and then the leading Hamilton did too, but the latter had just enough of an advantage over second placed Verstappen to still reach the chequered flag first. Leclerc completed the podium trio.

So we now await the British Grand Prix version two in just a week’s time, entitled the 70th Anniversary Grand Prix to reflect the fact that back on 13 May 1950 the first ever Formula 1 championship race was held at Silverstone. After the tyre failures the subject of whether teams will mandated to stop each driver at least twice will no doubt be discussed for safety reasons and let’s just hope that the likes of Red Bull, Ferrari and Racing Point can improve enough to at least present more of a challenge to the mighty and long all-conquering Mercedes team.