Hamilton Makes It Six In Texas 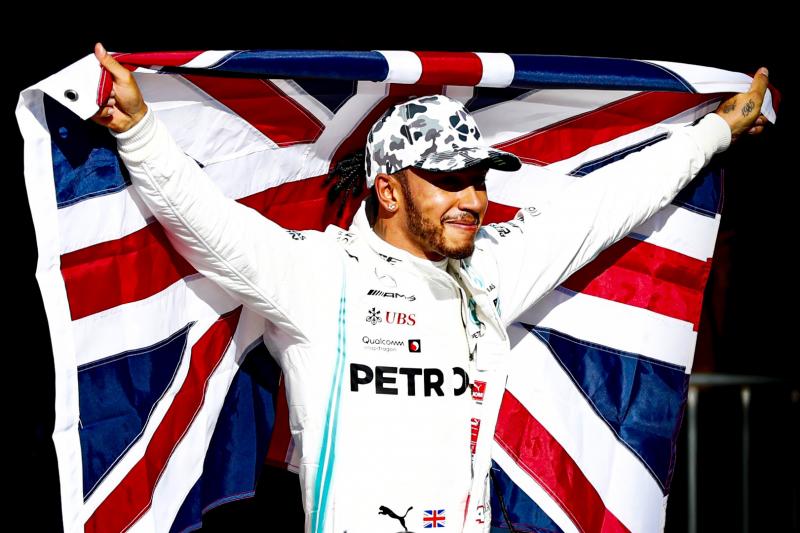 Mercedes’ Lewis Hamilton celebrates claiming his sixth F1 Drivers title
Lewis Hamilton has claimed a sixth Formula 1 Drivers Championship title following this weekend’s United States Grand Prix at the Circuit of the Americas near Austin, Texas. The Mercedes driver only needed to finish in the top eight to seal the achievement with two races remaining, but reached the chequered flag as the runner-up behind his team-mate Valtteri Bottas.

The longtime Monaco based British driver has won five of the last six Drivers titles for his dominant German team following a previous one for McLaren back in 2008 and now sits just one title behind the most successful F1 driver to date, Michael Schumacher. 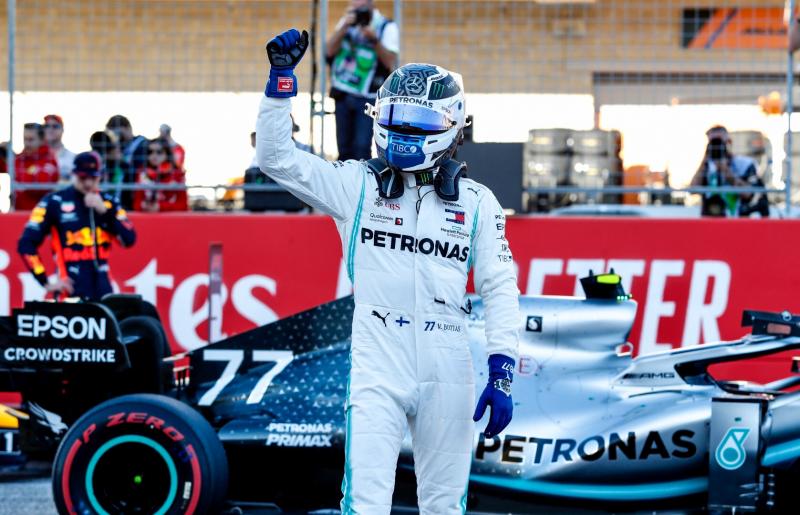 Valtteri Bottas claimed pole position and the race win, if not the Drivers title
On the Thursday before the US Grand Prix weekend the FIA’s World Motorsport Council had unanimously approved the new F1 technical, sporting and financial regulations to be implemented with effect from the start of the 2021 season. This followed months of arguments and delays about their content.

One of the main aims has been to create cars which can be more easily followed by others and thus create more overtaking opportunities, whilst also looking more futuristic. The new sporting regulations will also clarify changes to the current Grand Prix weekend format, such as delaying driver and team principal media conference commitments from Thursday to Friday and thereby making each event a three rather than four day affair. 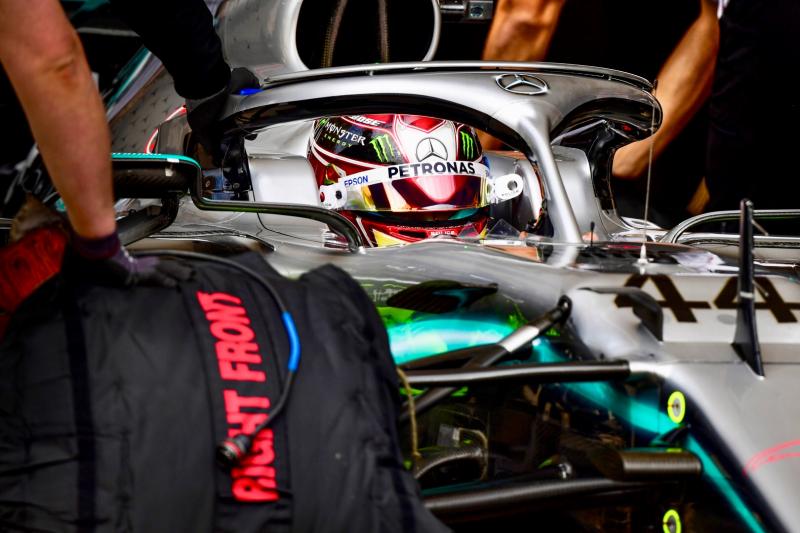 Hamilton prepares to go to work
A Formula 1 first will be the introduction of a cost cap on annual team spending, to be set at US$175m, but crucially excluding major expenditure areas such as driver costs and the salaries of the three other highest paid members of each team.

Ferrari has held a longstanding and controversial right to veto any rule changes it is not in favour of, but the Italian team has confirmed that it will seek to find a suitable way ahead through consensus rather than conflict. It is clear that all parties agree that the new regulations are an important waypoint on the route to the new look 2021 F1, if not yet the end game.

Turning back to the 2019 ontrack action, when the cars headed out for Friday’s opening free practice session it was Red Bull’s Max Verstappen who went fastest, followed closely by the red Ferrari pedalled by Sebastian Vettel. Hamilton was only eighth on the timesheets after failing to set a representative time.

Several drivers, including the champion elect, expressed understandable concerns about the bumpy nature of parts of the track surface and the resultant risk of back injuries from spinal compression when the cars bottom out. Hamilton said “I had a massive headache after first practice and had to lie down for a while”, whilst Racing Point’s Sergio Perez feared an increased risk of high speed accidents come Sunday’s race. 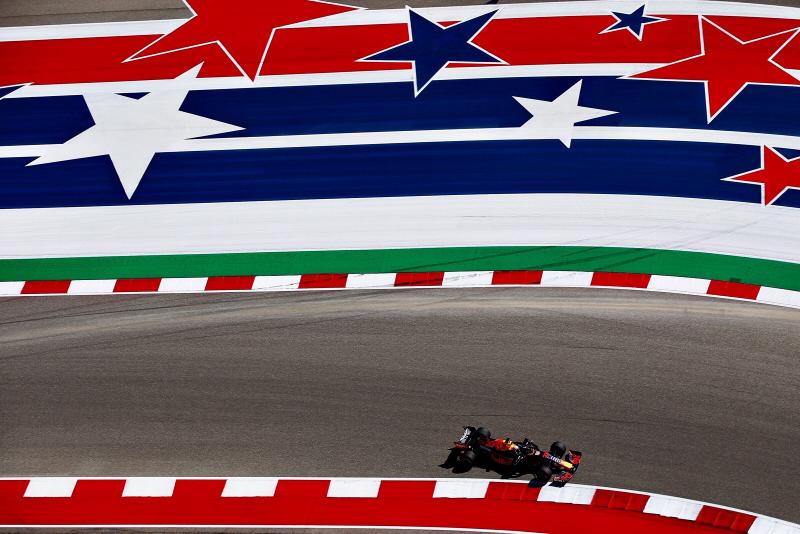 Red Bull’s Max Verstappen in action in the land of Stars and Stripes
Romain Grosjean, driving for his American Haas team, crashed into the barriers at the downhill Turn 5 during the second practice period, bringing out red flags. Subsequently Hamilton went quickest, outpacing Ferrari’s Charles Leclerc by 0.301s, but that advantage was mainly down to a tow he received on his best lap. Perez failed to stop for a requested weighbridge check at the end of the session and didn’t return his car to the officials unchanged following a miscommunication between the driver and his crew - as a result the experienced Mexican was penalised with a pit lane start for Sunday’s race. 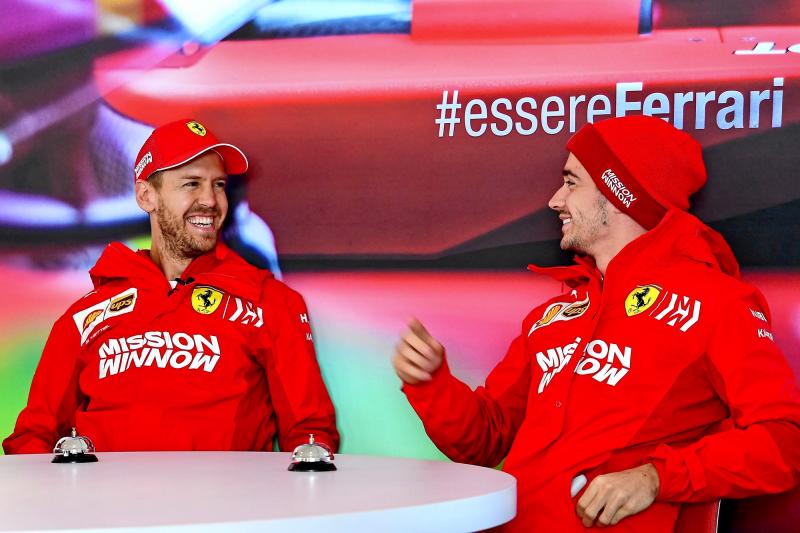 A relaxed Vettel and Leclerc share a joke in Texas before race day proved to be a major disappointment for the Ferrari duo
On Saturday afternoon there was drama too for Leclerc in the final practice session when his Ferrari ground to a halt with an oil leak before he had set a time, but his engineers did an amazing job as they installed a replacement previously used power unit in time for the start of qualifying, which meant he avoided any penalty. Verstappen set the fastest time of final practice ahead of Vettel, with Hamilton only fifth quickest.

A week earlier Hamilton and Verstappen had clashed on the opening lap of the Mexican Grand Prix, with the Mercedes ace publicly criticising his rival’s driving ability, and come qualifying in Texas the simmering feud between the pair was reignited when Hamilton forced the young Dutch racer off the track, triggering an angry expletive laden response over the radio from the Red Bull driver about Hamilton.

In the end it was Bottas who claimed pole position after setting a new track record, just ahead of Vettel and Verstappen, making it a trio of teams in the top three. Leclerc completed the second row on the grid, with Hamilton only fifth quickest, his worst ever US qualifying performance. 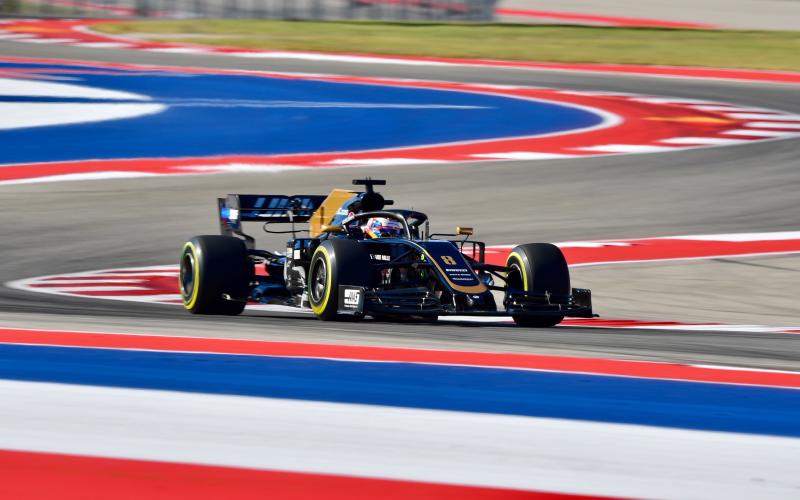 Romain Grosjean navigates his way around the brightly coloured track at his Haas team’s home event
Sunday’s Grand Prix was scheduled to start at ten past one local time so that a massed European TV audience, where F1 is far more popular than in the USA, could watch it live as prime time evening viewing, particularly with the prospect of a champion being crowned.

When the red lights went out at ten past seven UK time Bottas sprinted into an immediate lead and a fast starting Verstappen swept into second place ahead of Vettel. The German had a nightmare opening lap as he was also usurped by Hamilton, Leclerc and McLaren’s Lando Norris, his Ferrari suffering from dreadful understeer.

Vettel’s day was soon to get much worse though as, after being passed by the Renault of Daniel Ricciardo, he suffered a dramatic failure of his right rear suspension exiting Turn 9 on the eighth tour and was instantly out of the race.

What F1 cars could well look like from 2021 onwards under the new regulations
As the Grand Prix settled into a pattern Bottas led from Verstappen, Hamilton and Leclerc and the leading drivers’ differing strategies were about to become apparent. In short, all of the leading quartet bar Hamilton were looking to undertake two pitstops whereas the reigning champion was intending to stop only once. Soon Verstappen, Bottas and then Leclerc had headed down the pitlane to switch to hard compound tyres, which are more durable but slower. On lap 24 Bottas swept past his team-mate to regain the lead and Hamilton instantly pitted for hard tyres himself, rejoining the circuit in third position.

Bottas made his second stop on lap 35, bolting on a set of medium tyres, a move which promoted Hamilton to the lead. From this point to the chequered flag it was going to be a three way fight for the victory spoils between Hamilton, Bottas and Verstappen as Bottas closed the gap to the leader and Verstappen crept up on both Mercedes drivers. Ultimately Bottas thrilled the Finnish fans present as he regained the lead after sweeping past Hamilton at the end of the back straight with four laps remaining, although Verstappen had to settle for the final podium position after being unable to find a way past himself.


Also by Graham Read...
Mercedes On Top After The Opening Three Day TestAlfa Romeo’s C39 Completes The F1 Class Of 2020The Williams And Racing Point Formula 1 Car LaunchesAlphaTauri Makes A Striking Arrival﻿Mercedes’ 2020 Silver Arrow Breaks Cover
So, Bottas claimed a well deserved victory and second place was more than good enough to give Hamilton a sixth Drivers title. Leclerc ended a miserable race day for Ferrari in a distant fourth position (although the young Monegasque did at least get the extra point for setting the fastest lap) and fifth placed Alex Albon put in another fine drive as he stakes his claim to be retained by Red Bull for next season. Ricciardo also caught the eye after completing the top sextet for Renault.

After the title celebrations had died down and the champagne had stopped flowing the Mercedes crew, along with those for all the other nine teams, set about packing everything up with thoughts turning towards the Brazilian Grand Prix at Interlagos near São Paulo in two weeks’ time. Mercedes may have won both the Drivers and Constructors championships for the last six years in a row, but there is still honour to be fought over in the two remaining races of the 2019 season.