Dukes London
If it wasn’t for the fact that Dukes London in Mayfair is probably one of the most luxurious hotels of its type in the capital, with a pedigree dating back to 1532, you might be forgiven for thinking that a slightly tipsy tradesman had been over indulging on the Martinis before fitting the property’s bedroom door handles!

This beautiful boutique hotel is located in a quiet courtyard at 35 St James's Place in the heart of Mayfair, just a hop and a jump from both the tube station, the majesty of Green Park and nearby Buckingham Palace……which is perhaps a clue!

It was raining as we arrived on foot from the Green Park underground station but, despite looking like something the cat had just dragged in – I was wearing bulky trail shoes and a heavy Arctic jacket acquired during a visit to Norway - General Manager Paul Skinner and his reception team couldn’t have been more welcoming.

Beads of water rolled down my bald head and, if the immaculate concierge could have towelled me down there and then to relieve my damp distress, I feel sure he would have done so. In the event, discretion was the better part of valour, and he refrained!

“Let’s get you to your room Mr Hopkins,” said the GM, gesturing in the direction of the lift, something of an Instagram hit thanks to a small two-seater sofa complete with cushions and a beautifully upholstered back rest.

“We have upgraded you,” he added knowingly and, with a twinkle in his eye, pressed the button to the fifth floor in the full knowledge that he already had the General Manager’s ace card firmly up his sleeve! “You will be in the Penthouse Suite.” Did they know it was my birthday?


The Little Touches!
I resolved not to be too impressed as we entered the Duke of Clarence Suite but failed miserably, despite subtle attempts to suppress my breath. I quickly began to sound like an asthmatic in need of an inhaler!

There was a toilet and vanity sink in the small room to my left and, in front of me, a corridor leading to a stunning bedroom with en-suite, a large lounge, dining room, office area and balcony: oh, how I prayed for a break in the downpour so that I could parade up and down outside like a Hollywood has-been but, sadly, it was not to be. The rain seemingly got heavier!

There was a bottle of champagne, and a slice of exquisite chocolate cake topped with strawberries on the dining table.

The words ‘Happy Birthday’ were painted in chocolate on the plate, reaffirmation that they certainly did know it was my birthday! This quintessentially luxury British hotel certainly has a nice line in noting the detail and, since the beginning of this year, has been offering complimentary Sunday Brunch or a three-course lunch or dinner – complete with a welcome drink – to every birthday boy or girl booking directly for four or more guests. If you do decide to sample Dukes London’s exquisite hospitality remember to quote the code #GBRBirthday!

Shortly afterwards we were introduced to the hotel’s Sales Manager Alberto Cambus who took over from Mr Skinner as our official guide, giving us a whistle-stop tour of the hotel’s GBR restaurant, where we would be dining later, Dukes Bar – a past haunt of James Bond author Ian Fleming – the Cognac and Cigar garden ……


The Cognac & Cigar Garden
….and Drawing Room, where afternoon tea is a firm favourite of those Royals seeking respite from the rigours of public life.


Afternoon Tea in the Drawing Room?
“We have 87 rooms – including 15 suites – and have been operating as a hotel since 1908,” said a proud Alberto, “but as far back as the early sixteenth century this was a Royal residence and part of the St James’ Palace complex. There are more Royal Warrant holders – suppliers to the Queen if you like – in this area than probably anywhere else in London.

“You will also notice that some of the handles on certain doors within Dukes London are slightly lower than others,” he said. “They were an indicator to servants that there was probably a Royal within and that they should prepare to bow as they entered!”

By then I had acquired the sophistication of a drying prune following the afternoon’s downpour, and even if the door handle on my suite was of the ‘lower’ variety, I was hardly in any condition to expect more than passing respect from any of the courteous staff visiting my room that day!

We would soon be enjoying more of the hotel’s facilities but, right then, the clock was ticking and there was much to see so, braving the rain once more, this time with a courtesy umbrella, we opted for the 15-minute, if slightly damp, walk to the Churchill War Rooms on King Charles Street.

It was in this labyrinth of concrete reinforced damp rooms that Britain’s controversial leader and his coalition Cabinet made history in the underground nerve centre of the Second World War, plotting the Allied response to Hitler between 1939 and 1945. 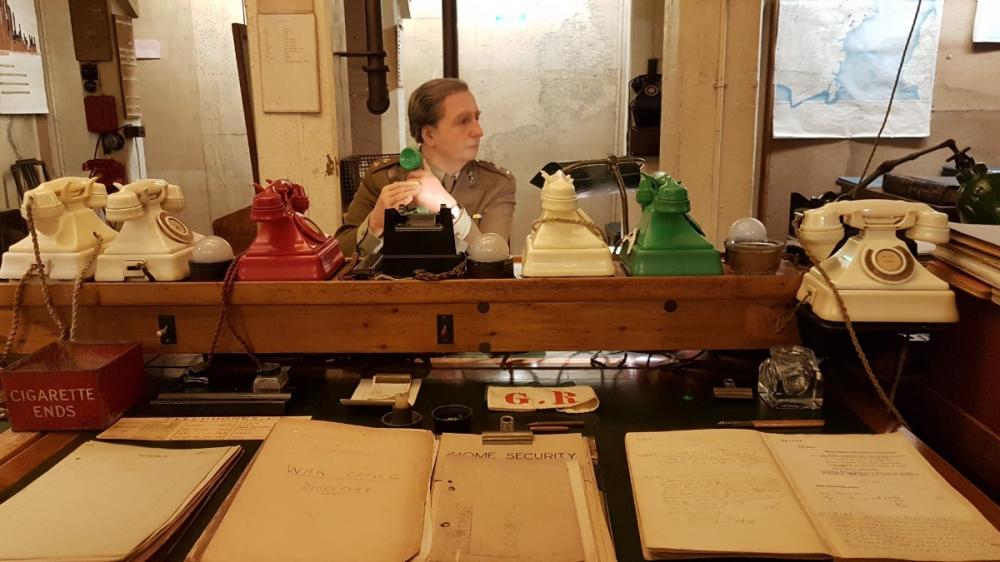 It is a fascinating and emotional experience, revealing Winston’s personal and political journey via the interactive Churchill Museum, which uncovers the influences and pressures that shaped his life, leadership and legacy.

Four hours later we emerged into the light, high tailing it to Bloomsbury for a visit to the Charles Dickens Museum, just a short walk from the Piccadilly Line’s Russell Square station at 48 Doughty Street.

This is where the author wrote Oliver Twist, The Pickwick Papers, Nicholas Nickleby and went on to achieve international fame as one of the world’s greatest storytellers.

Dickens and his wife Catherine moved there a few months before Queen Victoria began her reign in 1837, hosting many of the period’s leading figures with dinners and parties, and it is the perfect opportunity to discover more about Dickens’ private world.


The lounge where Dickens entertained
Perusing the Victorian delicacies of the great man’s dining room, albeit copycat versions most probably made from plastic or plaster of paris, my appetite returned and, inspired by the prospect of dinner at the Great British Restaurant, we headed back to Dukes London as the evening began to draw in.

Feeling almost human again after a luxurious hot shower, we took the lift, once more, down to the hotel restaurant a few floors below. It was a time to relax and enjoy the glory of Norfolk-born Executive Head Chef Nigel Mendham’s traditional British menu.


The Great British Restaurant (GBR)
It was a relaxed, stylish evening and both the service and food....

...could not have been better, however, the prospect of spending time with Martini Maestro, Alessandro Palazzi in Dukes bar later that evening was an intriguing one.


Alessandro Palazzi at work
He has been at the helm in London’s most famous up-market Martini hostelry since 2007. This is the place where Ian Fleming is said to have taken his inspiration for the Vesper Cocktail, as mentioned in his 1953 novel Casino Royale. These days it is called the Dukes Vesper, a subtle nod to the world’s greatest spy!

Over breakfast the following morning I found myself in conversation with an American couple from Portland in Oregon.

They had been visiting the hotel twice a year for 20 years. “We just love their attention to detail,” she espoused before tucking into her continental breakfast.

We followed suit, partaking of an exquisitely prepared breakfast before heading off for a quick look at the Handel & Hendrix in London experience at numbers 23 and 25 Brook Street. 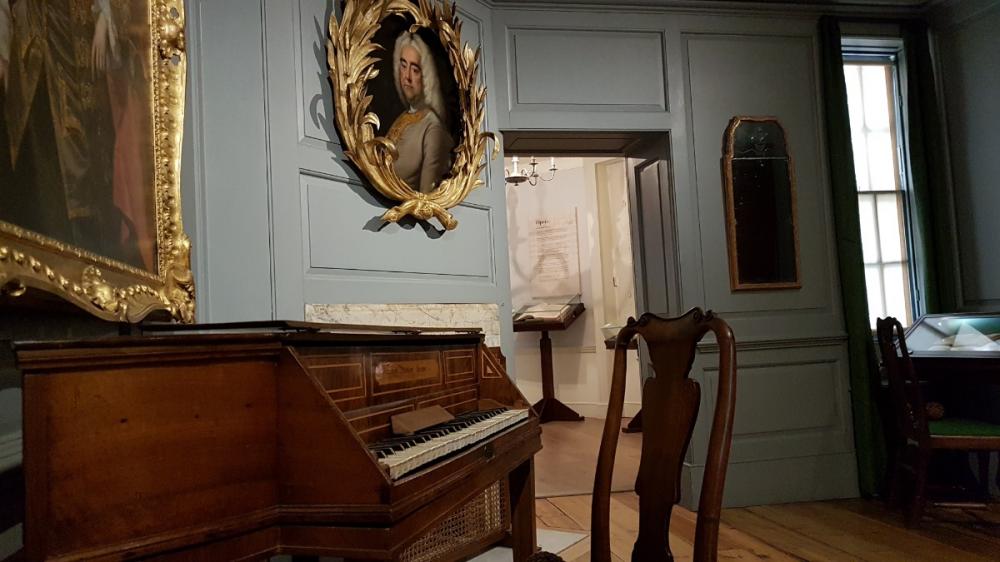 Handel's Home at 25 Brook Street
Separated by a wall and 200 years are the homes of two musicians who chose London and changed music.

Handel moved into his house in Brook Street (now No. 25) during the summer of 1723, encouraged no doubt by his court appointment to the Chapel Royal earlier that year.

After his British naturalisation in 1727 he decided to remain there and spent a total of 36 years in the property which was a snip at £50 rent a year!

The flat on the upper floors of 23 Brook Street was found by Jimi Hendrix’s girlfriend Kathy Etchingham from an advert in one of the London evening newspapers in June 1968 while he was in New York. 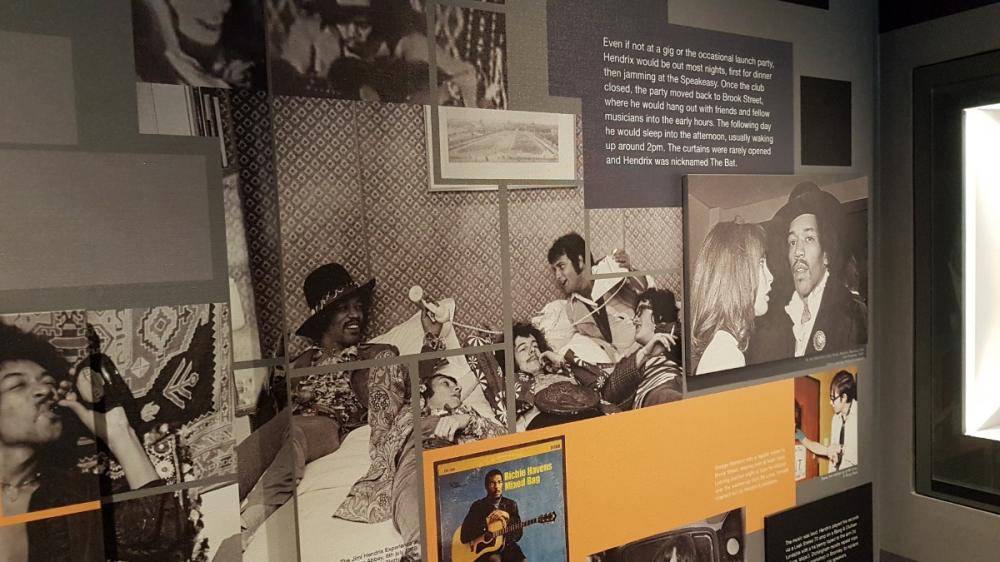 Hendrix as a neighbour!
He moved in briefly in July before returning to the United States for an extensive tour and spent some time decorating the flat to his own taste, including purchasing curtains and cushions from the nearby John Lewis department store, as well as ornaments and knickknacks from Portobello Road market and elsewhere. He told Kathy that this was ‘my first real home of my own’.

It is a fascinating insight into the lives of two musical giants, two centuries apart but each game changers in their own right.

It was time to head back to the frozen wildernesses of the North!

We returned to collect our bags from Dukes London where we had arranged a late 1pm checkout.

As we prepared to bid a fond farewell to two days of unadulterated luxury, it was unsurprising to read that after just three months into the year, the hotel has already received a number of high-profile recognitions including a 4 Star rating from Forbes Travel Guide, an accolade as one of the ‘Best Hotels in England’ from prestigious American publication U.S. News & World Report, and an AA 5 Red Star rating.

We stepped into the mid-morning drizzle. I was once again wearing my trail shoes and heavy waterproof Arctic jacket. Reality was rapidly returning!


Also by Phil Hopkins...
Tips For Practising Good Hygiene Whilst TravellingBeddgelert, Brooklyn & Beating Covid-19!California Here I Come – After Covid-19 !Five Things You Didn’t Know You Could Do In Croatia!Underwater Photography Courses St Lucia