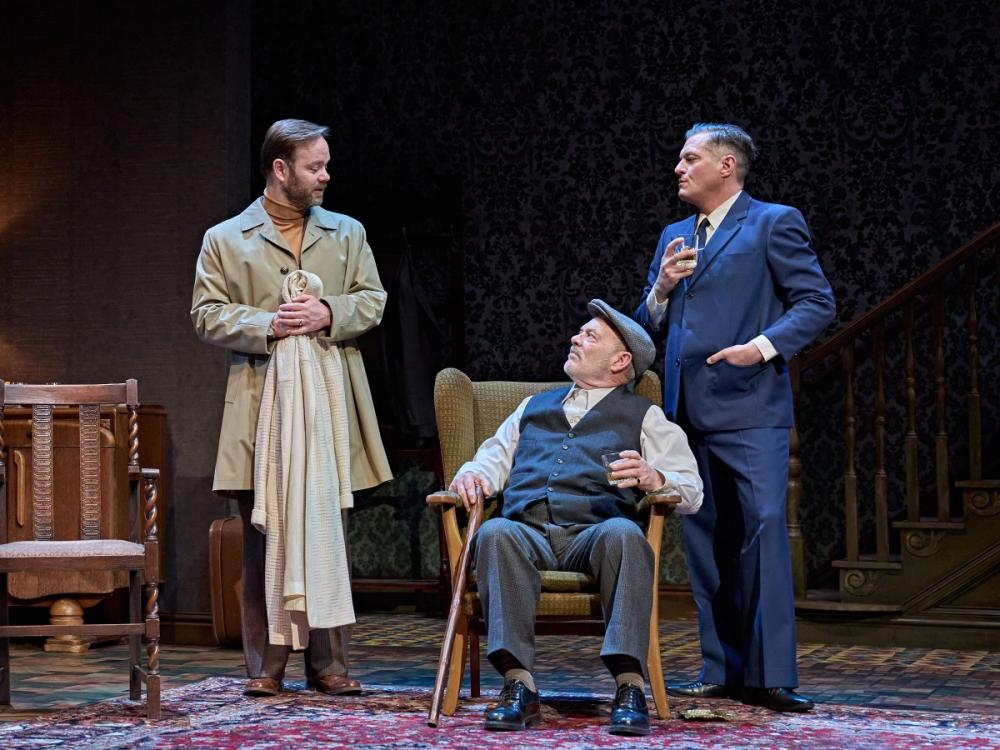 The Cast of The Homecoming (L-R) Sam Alexander, Keith Allen and Matthew Horne Production shots by Manuel Harlan
As we relaxed into our seats, surrounded by the pleasant chatter of an expectant theatre audience, an ominous rumbling sound seemed to emerge from beneath our feet, increased in volume, culminated at the opening of the curtain . . . and abruptly stopped – confronting us with an uncomfortable, uneasy silence. 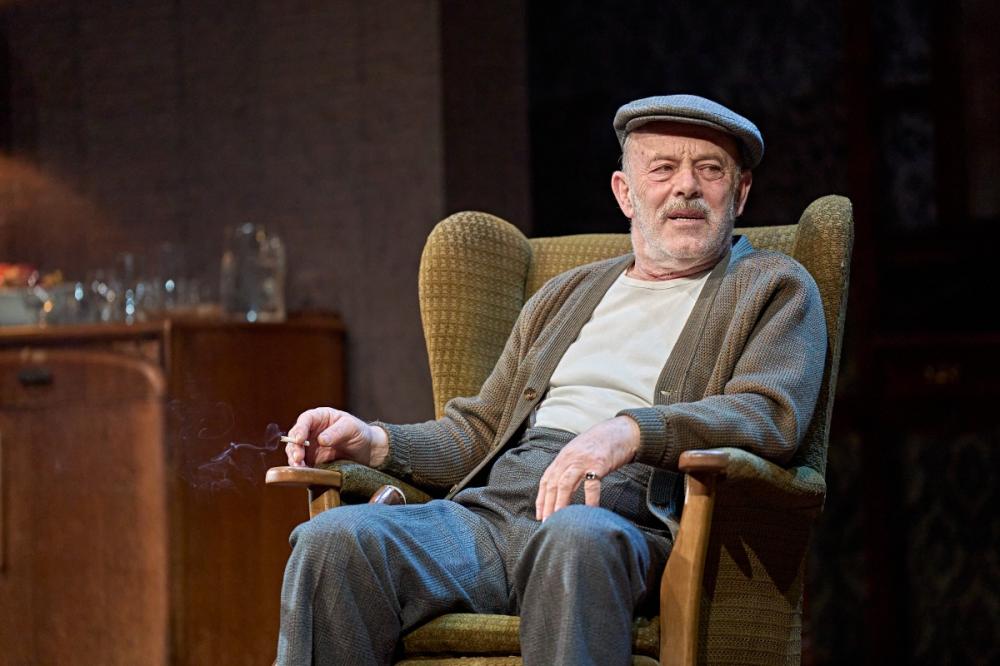 Keith Allen
The set was stark, scaled down to a minimum. Centre-stage sat Max (Keith Allen) the old man, the patriarch, a former butcher, hunched in a throne-like chair, and yet belligerently leaning on his stick; at a bare table to the left his chauffeur brother Sam (Ian Bartholomew); and on the other side his two sons Lenny and Joey (Mathew Horne and Geoffrey Lumb) – a pimp and a part-time boxer.

Behind this family gathering rose - against a darkly grey-green wall – a staircase diagonally from bottom left to top right; from the visible space of the stage below reaching into invisible obscurity above. Whenever someone ascended or descended, the person was menacingly followed by a projection of their own, enlarged shadow. 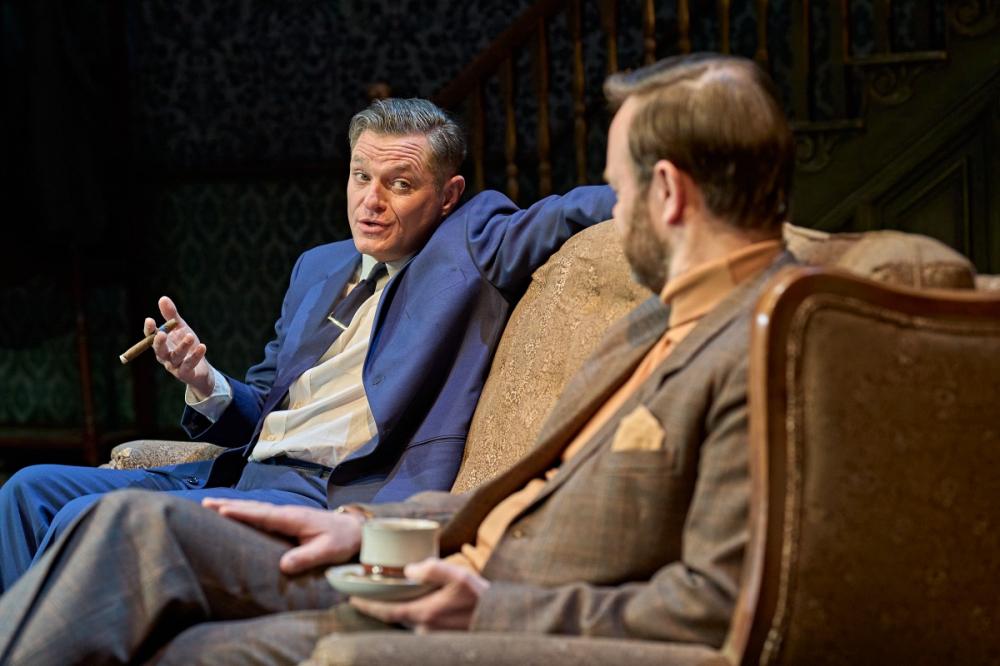 Before even a single word of dialogue was spoken, the body-language of the actors brilliantly conveyed the ensuing struggle for positioning within this all-male household. Lenny read the paper, the racing section, and Max asked for scissors and a cigarette. ‘Pauses’ are not plays for time; they are calculated delays with insulting intent; they are refusals to acknowledge the questioner, refusals to engage; they are designed to mock. Max loses his temper and threatens his son Lenny with his walking stick. Brutality and savagery lie very close to the surface. Lenny laughs it off with a pretend reversal to being a small boy – denying his father the victory. 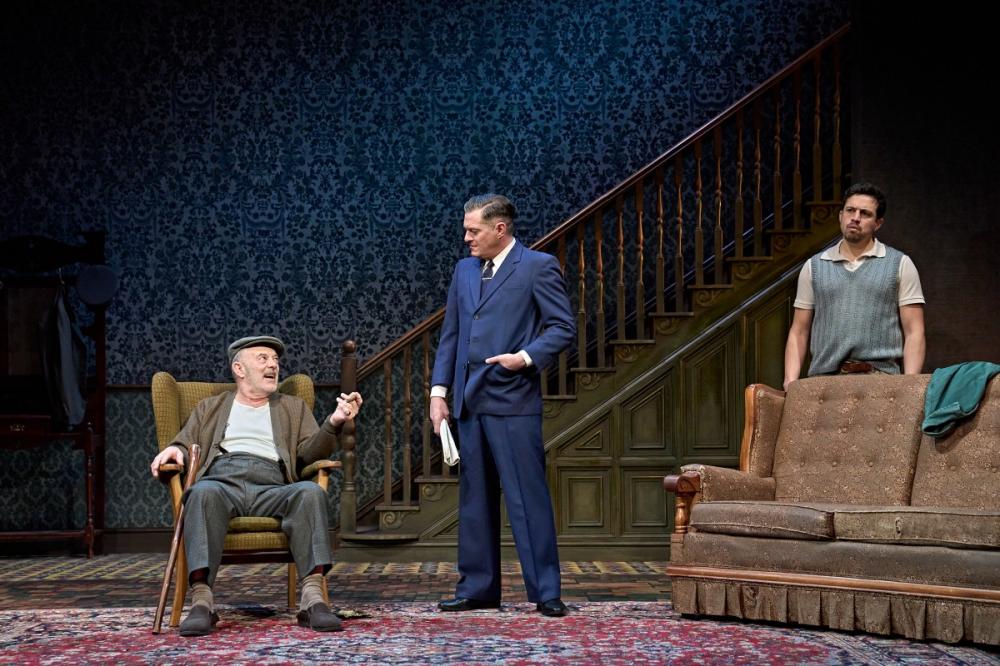 (Right) Geoffrey Lumb
The ‘scene-change’ that followed (a format that was used throughout the play) was an interesting idea of dimming the lights on the final moment of a scene, creating a tableau of almost cut-out shapes (or re-arranging ensembles), unleashing a crashing sound, and with lights up ‘re-animating’ whoever was on stage. The audience was given no chance to step outside the action and reflect; the drama would unfold relentlessly. 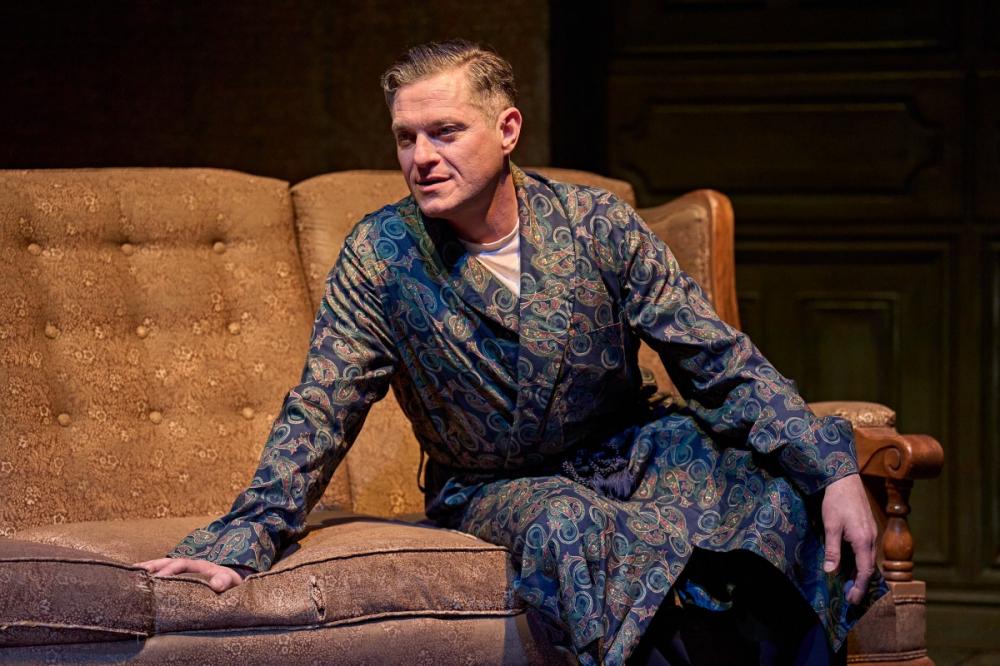 Matthew Horne
And the conflict would now be truly ignited with ‘The Homecoming’ of Teddy (Sam Alexander), the eldest son, who teaches philosophy in America, and his wife Ruth (Shanaya Rafaat), who also came from this area. In this production she arrived all dressed in white, slim and untouchable. Her husband fussed around her, and tried to reassure her that she’ll like his father – “Honestly . . . very warm people . . . they’re not ogres . . . They’re my family.” And he is one of them. So, why did he wait six years to introduce her? No wedding invitation, no mention to his father of three grandchildren. 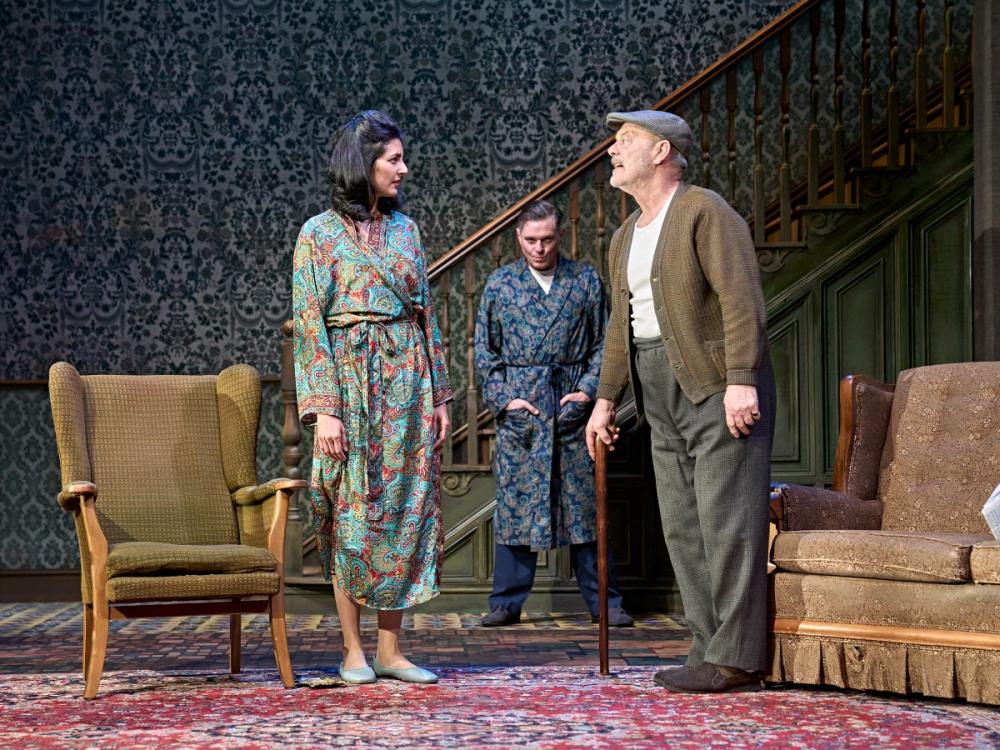 Shanaya Rafaat
Harold Pinter once stated ‘that if ever there was a villain in the play, Teddy was it’. It seems almost as if Teddy purposely chose his moment, watching the ‘shifting perspectives’ from the side-lines. Masks begin to slip; the past – like that menacing sound at the beginning of the performance – rears its head. Truths emerge that were considered to have been pushed safely underground. Sam blurts out the family secret that Jessie had cuckolded her husband Max, and collapses on the floor, while Ruth is step by step taking her bearings, observing and evaluating her own personal change, and the change of her position within this maze of family relationships: considering ‘serving’ the all-male household – on her terms. There are eerie echoes from the past: deserting one’s husband, turning prostitute, leaving three sons motherless behind. In the final image she sits in command, ‘enthroned’: Max on his knees, and Joey’s head in her lap. But Lenny remains standing; both she and he have kept silence since Teddy’s departure. There remains an ambiguity – it is a ‘work-in-progress’ - details still to be negotiated. 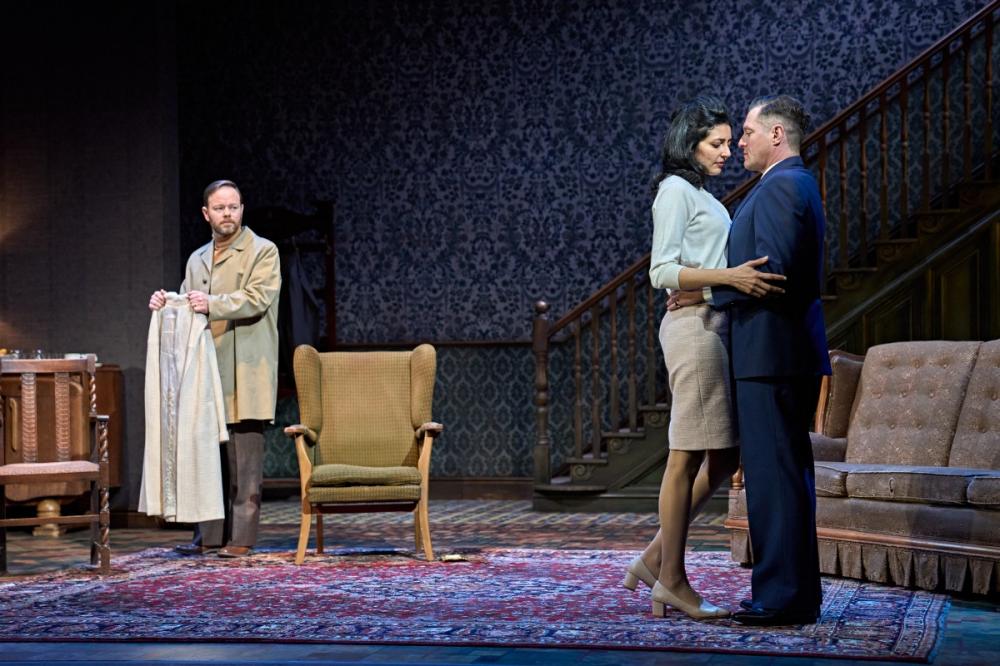 A superb cast, direction and production team. Harold Pinter once wrote: “Meaning which is resolved, parcelled, labelled and ready for export is dead . . . meaningless.” This performance left ample space for the pleasure to approach it from wonderfully varied viewpoints.