Have Your Say On Humber Stretches Of England Coast Path 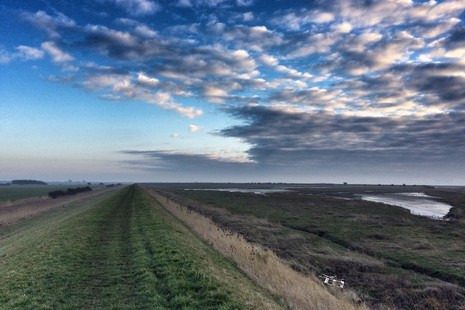 A section of the Humber coast path at Paull Holme Strays
The proposals recommend significant improvements to coastal footpaths enabling a continuous walking route around the estuary from Maplethorpe to the Humber Bridge on the south side, and Humber Bridge to Easington on the north bank.

"From the south the trail follows major coastal dune systems, saltmarshes and sea defences. It passes Donna Nook – one of the largest seal breeding colonies in the UK - before entering the seaside resort of Cleethorpes, quickly followed by Grimsby with its historical fishing heritage.

"The south bank of the estuary moves between intensive industry with chemical works refineries and the ports, to remote flood banks with extensive views over the estuary and its internationally important coastal habitats"

"Starting at the iconic Humber Bridge the route takes in the port areas in and around Hull and the city’s vibrant waterfront area, as well as the more remote estuarine landscape towards the sea.

"Huge skies and open views over the estuary constantly change with tides revealing the internationally important coastal mudflats and saltmarsh. At the mouth of the estuary the trail passes the astonishing landscape of Spurn Point."

There is now a period of eight weeks for members of the public to give their views that the Secretary of State must take into account when considering whether to approve the proposals.

If approved, this route will become part of the England Coastal Path – the 2,700 mile long distance walking route and England’s newest National Trail currently being developed around the entire English coast by Natural England.

The England Coastal Path will secure legal rights of public access for the first time to typical coastal land including foreshore, beaches, dunes and cliffs.

"When we developed the proposals, our aim was to give people a superb new way to appreciate and enjoy the rich environment of the Humber estuary and its adjacent coastline without damaging local wildlife and habitats.

"Over the next eight weeks, we are inviting local residents, farmers, business owners, visitors and organisations to have their say. It’s important that all responses are taken into account and we look forward to hearing people’s views."

"The proposals have been shaped by the valuable input of key landowners and organisations, and aim is to enhance parts of the existing public right of way between Wellington Street West and the city boundary to make the route more attractive.

"The Natural England consultation ensures that all affected organisations, local residents, visitors and businesses can have their say."

"This will provide opportunities for long distance walkers to travel the length of our coastline, but also provide local communities with more choices, and more access to the natural environment.

"Access to natural green spaces can help as part of our exercise and health and wellbeing, and provided that the new Countryside Code is followed, the biodiversity and tranquillity of this special landscape will remain protected."


As well as recommending new sections to the route, the proposals outline improvements to existing access to the coastline, with proposals:
to identify a clear and continuous way-marked walking route along this part of the coast, bringing some sections of the existing coastal footpath closer to the sea and linking some places together for the first time
to allow the route to ‘roll back’ if the coastline erodes or slips, solving the long-standing difficulties of maintaining a continuous route along the coast

Owners and occupiers of affected land may make objections about the proposals on specified grounds, which will be considered by a Planning Inspector before the Secretary of State makes a final decision.


The deadline for representations and objections to Natural England is 7 July.

View the proposals and give your views on the Humber stretches of the England Coast Path here: https://www.gov.uk/government/collections/england-coast-path-improving-public-access-to-the-coast