Heritage Bitter From The Horse Town

My beer of the week is Malton Brewery’s excellent Heritage Bitter. 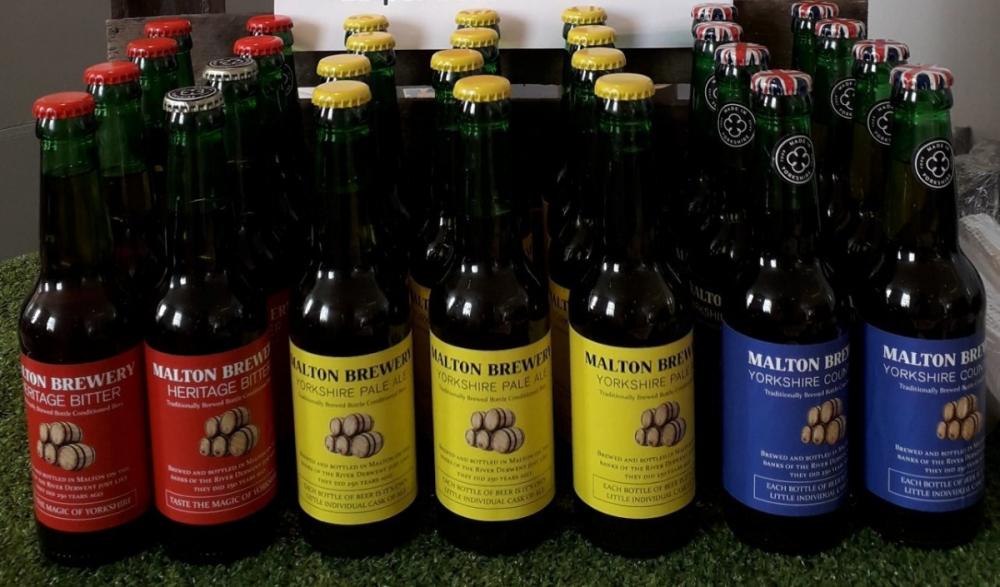 It is, as its name suggests, a traditional best bitter, a sweet, fruity, malty beer, beautiful on the palate, with a smooth understated bitterness. With a 4 per cent ABV, it is refreshing and undemanding, the sort of beer that makes you want to linger and reminisce, make friends with strangers for the afternoon, dream about old England.

Full-bodied and reddish-amber in colour, it gives off the aroma of caramelised hops. Like many bottle-conditioned ales, it has a nutty maturity. Its head is off-whitish and, with mild carbonation, disappears quickly leaving some lacing. The aftertaste is mildly malty, hinting at dried fruits. It is one good drink with a fairly universal appeal.

The original Malton Brewery closed in 1998 after trading for many years behind the Suddaby’s Crown Hotel, in Wheelgate. The name has been brought back to life by Howard Kinder, whom I was a keen to talk to about his micro-brewery venture, which last year got huge exposure on the BBC series, One Day That Changed My Life.

I caught him, a one-man band, at a fortunate time. The boss, brewer, bottler had a rare moment to spare. He was at the mash stage of the brewing process, making another ale, Sup Up, having soaked the malt mixture and left it standing in water at 65 degrees celsius. He could leave it a while but not too long lest ‘bad sugars’ should come in.

I promise to keep an eye on the time while, over the phone, we discuss all things brewing, when to add the hops, the temperamental nature of yeast, his aversion to finings and preference for water purification.

It’s obvious that Howard is totally immersed in his craft – and, yet, difficult to believe, he’s still quite new to it and confesses to still being keen to add to his knowledge. A native of Derbyshire, he was a Senior Manager for Tesco’s until a couple of years ago when he visited Malton to see his son, a local jockey. This was the day that changed his life. It was love at first sight, especially when he found available, ideal for his purposes, the Grade 2 listed building down on the old wharf on the River Derwent, dating back to when the town was a port. ‘I knew that Malton was marketing itself not just as the horse town but as the food capital of Yorkshire,’ he enthuses, ‘and clearly there was room for a craft brewery.’

He wanted to do the job properly and had lessons from people at the Great Yorkshire Brewery (formerly Cropton Brewery) before taking the plunge. He only began brewing in January of last year, everything done on site, and didn’t reach capacity until the following April, about 400 litres a week, approximately 700 pints. Soon he was supplying food festivals in Malton, Filey and Scarborough, building up other outlets. So successful was he that the BBC featured him as a model of what could be achieved in quick time.


Also by Andrew Liddle...
Doors Opening For The Georgian Theatre RoyalAnd Then There Were TwoMeet Magic Rock's Christa SandquistSunak Is A Bit Of A DragRadio Gaga
Covid was obviously a tremendous setback to his burgeoning business. At a stroke he lost the food festival trade, but he is bravely soldiering on, personally delivering his craft beers within the Malton area and selling on Amazon and E-Bay. Bearing in mind that 65 per cent of craft beer brewers have already halted production and most of the rest have vastly decreased their output, it is indeed surprising to find him still brewing as normal. Optimistic that post-Covid people will return with even greater appetite for his beer, he continues at capacity to build up his stocks. Bottle-conditioned ale, of course, needs to stand for anything up to two months before it’s ready to drink, so it is necessary to plan ahead.

It was time for him to return to the mash and for me to taste the fruits of his labour, spoilt for choice by his splendid Yorkshire Pale Ale, Yorkshire Country Ale, Brexit Ale, Yorkshire Pudding Beer and, of course, my beer of the week, Heritage Bitter.