Hope And Social: The Band Anyone Can Join 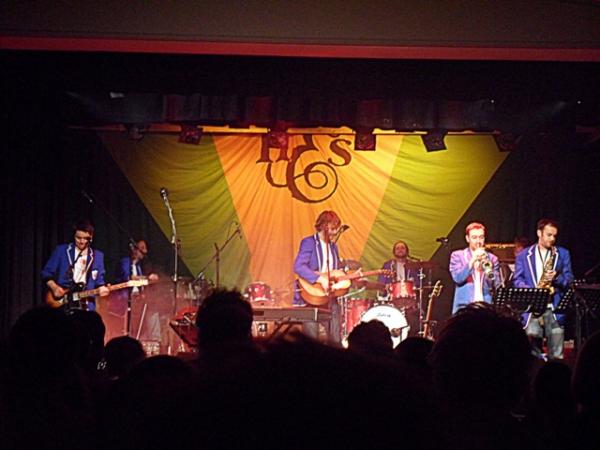 I'll be honest: Despite having interviewed some of the boys of Hope and Social and heard their competent vocal abilities, I was still unsure what to expect from the group whose remit was to get as many people joining them on stage as possible. How good would the music be, both as a stand-alone band and once the general public had ascended onto the stage?

Thankfully, in both cases, the answer was a resounding: 'awesome'. The concert provided variety, energy, and the all-important audience interaction, which meant the entire crowd was engaged and focused on the performance throughout the nigh-on two hour set.

As I entered the Town Hall in Grassington, I was somewhat surprised to see there had been no seats put out in front of the stage, and various people were seated somewhat uncomfortably on the floor, waiting for the gig to begin. However, my fears were allayed almost instantaneously once the band had taken to the stage, as their music inspired everyone to get on their feet and start dancing.

I use dancing as a very loose term.

The gig was split into three vague parts - the group kicked off by singing around 7 or 8 numbers by themselves on stage. Had this been the only part to the concert, it still would have been a phenomenal night, because the boys clearly have great musical talent and put it to good use on their songs.

Their music is best described with one word: anthemic. Combining guitar, trumpet, sax, drums and piano, the group write music with catchy, sing-along hooks that uplift, while scattering various other lesser used instruments across the set, including a cowbell, xylophone and banjo.

Particularly worthy of note is their use of drums, which are used sparingly but allow for great swell within the music. Also impressive is the ability of a couple of the group members to play multiple instruments, a talent which always makes me go green-eyed with envy.

However, the fun didn't stop there. A short second section of the gig involved the band leaving the amplified security of the stage and taking to the floor, singing a couple of gorgeous acoustic numbers within the crowd, encouraging to audience to join in on the again catchy choruses.

Then, gradually, certain members of the audience revealed their own instruments, mainly kazoos, in true flash-mob-esque style, and proceeded to march through the audience and onto the stage behind the band, kicking off the final and most entertaining part of the show. 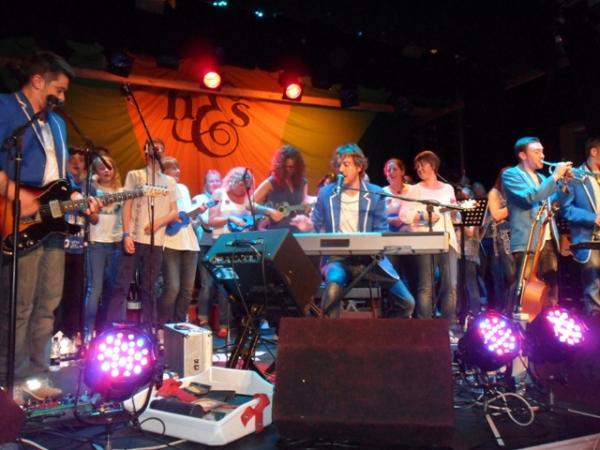 The band, joined on stage by musicians who had attended their workshops earlier in the week.
The band left their most memorable numbers for this section, including a few covers and samples of more well-known songs. Joining the already impressive arrays of instruments were ukuleles, clarinets, violas, violins and more saxophones, which combined sounded far better than an untrained, workshopped orchestra and choir should have sounded - and credit to those who took part.

If people weren't dancing at first, they were by the end, and as the group wound up their incredible show, everyone was left buzzing with excitement and grinning from ear to ear with sheer joy at such an uplifting show of community spirit.