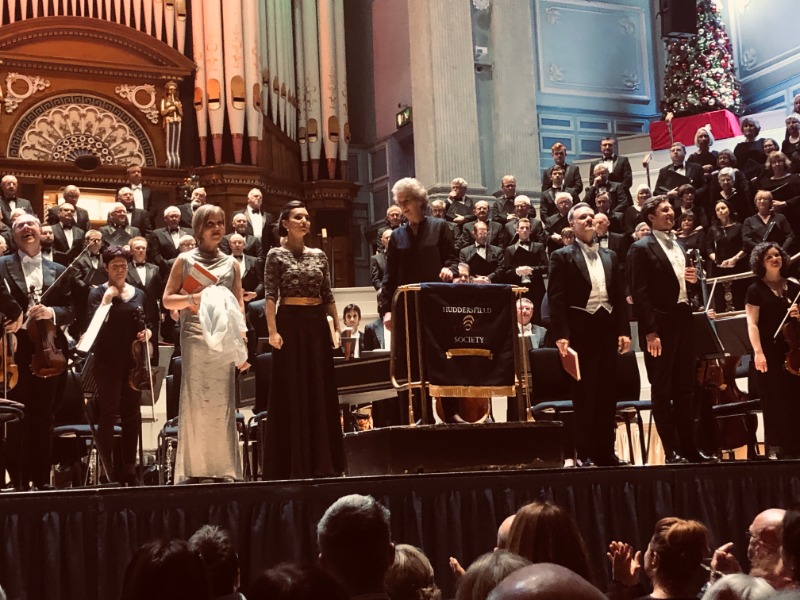 Image by Stephen Rattigan
A friend, and devotee of the Huddersfield Choral Society of many years standing, once described Handelian Oratorio as ‘Up and at ‘em music’, and there was an unambiguous truth to his words on Tuesday night at Huddersfield Town Hall. Dedicated to, but embodying something beyond, the religiose, Messiah is the Church militant, the Church triumphal. Whatever your devotional affiliation – and you could speculate that large sections of the choir, orchestra and audience of 2019 have none – Messiah speaks to the inherence of a dynamic spirit within all of us.

And you couldn’t fail to have that spirit lifted in a phenomenally well-organised performance of sustained power, especially in the defining closing stages. The choir have performed Handel’s masterwork over many generations, and Huddersfield has become the unofficial adopted home of Messiah almost on the strength of continuity alone. Perhaps it has something to do with an intuitive understanding of how you think the oratorio should best be expressed, and if interpretations vary hugely, it is the Choral Society’s earned privilege to invest the work with military numbers, and raw energy. If Handel’s initial conception was for the work to be rendered by orchestras and choirs of modest proportions, you never doubt that he would have been delighted with the roof-lifting spectacle of hundreds of raised voices. 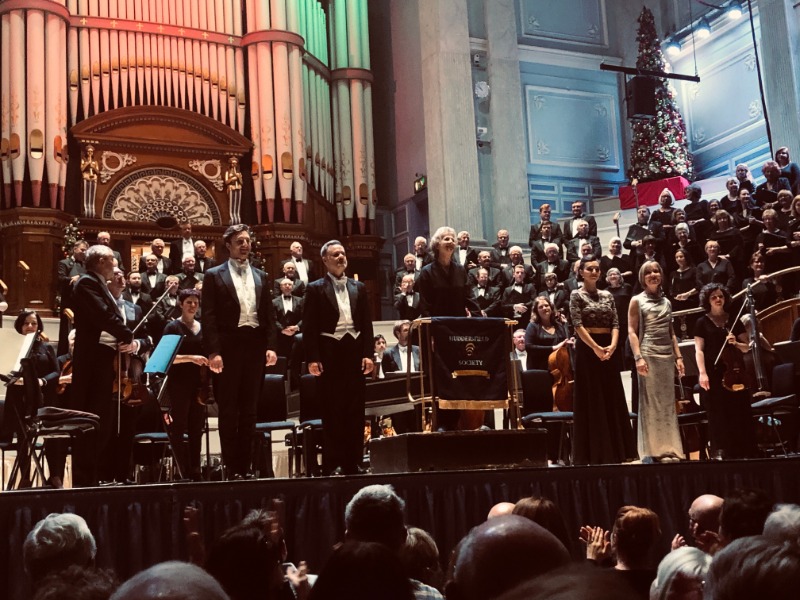 Image by Stephen Rattigan
The received impression on Tuesday was thrilling, thanks in no small measure to the welcome return of renowned conductor, Jane Glover, whose insight is manifested in a kind of pre-emptive lyricism of movement which excels in anticipation, and is a joy to witness. Her direction of Orchestra of Opera North was subtly controlled but expertly deferential, giving vent to individuality where necessary – I think particularly of the brilliant novelty of solo violins at the very end of a performance of astonishing vigour.

So too with Gregory Batsleer’s directing of the choir: a breathtaking feast of collective harmonic integrity, rendered with a verve and force which seems to crescendo year on year, and yields the illusion that the way to the sublime bears its own accelerant vocal momentum. Words, as you may gather, are inadequate to the task of describing the achieved emotional effect.

Nor were we disappointed by the solo voices whose stringent, and at times strident, handling of the recitatives bolstered Messiah’s unfolding narrative with great individual authority. That Bass Baritone, Dingle Yandell, was a last-minute replacement did not undermine his fine performance – instead, the declamatory power of his voice yielded assurance in its deep undertow. The subtlety of Andrew Tortise’s exposition at Tenor counterpointed neatly with the peripatetic delicacy of Hungarian, Eszter Balogh’s, Mezzo, whilst the renowned Scots Soprano and Baroque expert, Mhairi Lawson, gave a bravura, wide-ranging reading of engaged emotional complexity.

Another night to remember at Huddersfield Town Hall.

Messiah was performed in Huddersfield on Tuesday, 17th December.