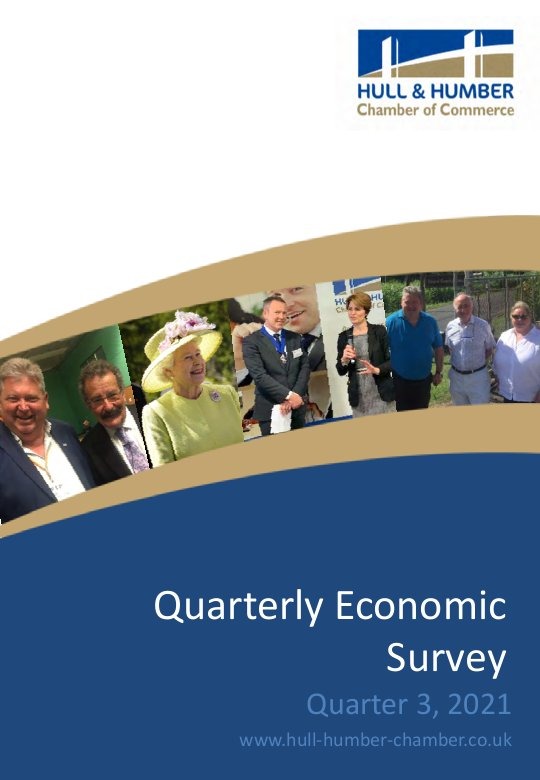 emphatic bounce back that we saw in the Quarter 2 Economic Survey results 3 months ago have largely been reversed or stalled in the latest set of results.

Research by the Hull & Humber Chamber of Commerce has shown that the initial enthusiasm shown as the country came out of lockdown, has now been replaced by a more cautious reality, as increases in national insurance, energy prices, transport and food costs point to rising inflation and ultimately increases in interest rates.

It is against this rather bleak economic outlook that we have seen Home Sales and Home Orders both fall back into negative territory, with orders taking the biggest hit with a balance figure of –15 points. Home Sales fared slightly better, dropping only five points.

The Chamber’s External Affairs Director, David Hooper, said: “It is clear that businesses in the Humber are facing a difficult period and there is considerable trepidation about what the future may hold, in the face of rising costs, supply issues and rising inflation.

“We hope the end of the furlough scheme will see some easing in the jobs market, with more vacancies being filled as previously furloughed workers return to work.

“However, there seems little doubt that it is going to be a tough winter for many as the public draw back on their spending as living costs rise, and a potential increase in interest rates looms on the horizon”.

The Quarter 3 Survey also revealed that Export Orders and Sales both fell back seven points as freight and logistics costs continue to be affected by Covid, not only in this country, but also in China where so many of our imports are sourced.

Employment in the last quarter also dropped back markedly, falling 31% compared to the previous quarter, and 23% fewer firms said they planned to increase their staff numbers in the next three months.

Recruitment also fell eight points compared to the previous quarter, but on a more positive note, there were more full time positions available and a small number of these vacancies were for permanent roles, however, 94% of businesses said they had found it difficult to recruit the staff they needed.

The squeeze on businesses was also evident in their cashflow in the last three months, with more firms reporting issues and the balance figure dropping by 35 points to –3.

Investment plans for plant and machinery also dropped slightly, down to four points, a drop of three points on the previous quarter.

The number of companies planning to invest in staff training remained similar to the last quarter, dropping only one point to –3.

Only 36% of firms said they were working at full capacity this quarter, down two per cent on the previous results.

With a shortage of labour, pay settlements was the biggest pressure on prices, followed by overheads and finance, but raw material costs seemed to be stable.

The biggest external concern this quarter was inflation, up 23 points on the last quarter, along with fears of rising interest rates and business rates. Competition, down eight points, was less of a worry, as was tax.