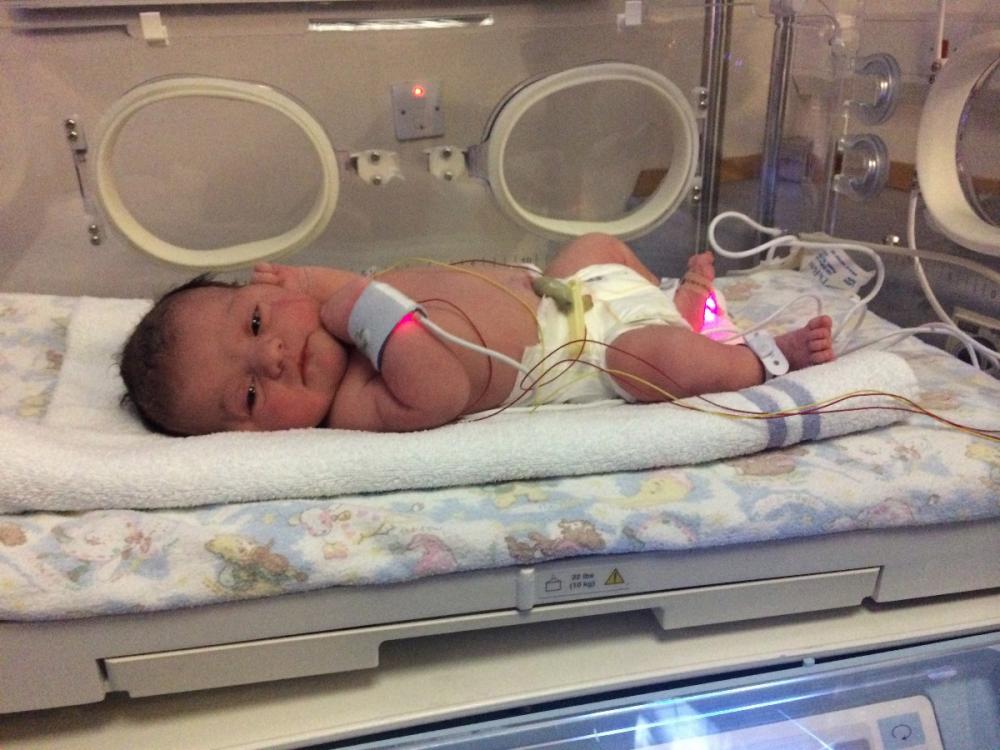 Now five years on – and in the midst of lockdown – dad Mat has raised £4,600 for the Sheffield children’s hospice that cares for his daughter, by cycling 190 virtual miles from his home in Retford.

“Amazing” Ella was diagnosed with a hole in her heart at the 20-week scan, so her family knew she’d have to go through open heart surgery after she was born. However, a few weeks later her parents noticed she was making “small, jerky, movements” and she was soon diagnosed with West Syndrome, which doctors described as a “storm in her brain”.

Despite the challenges they’ve faced, Mat and his wife, Katie (36), have tried to remain positive and remind themselves about what Ella can do.

Mat, 36, said, “When I think back, the kind of character Ella has now really is amazing. She does things we never thought she’d do. Other parents sometimes take things for granted – we’d love to be able to complain about normal mum and dad things – like Ella drawing on the walls – but this is our normal.”

The family have been supported by Bluebell Wood Children’s Hospice since 2018, with the hospice care team providing time for Katie and Mat to spend quality time together while Ella receives respite.


Katie, Ella and Mat
Determined to say thank you Mat and his brother, Craig (40) decided to pedal for 12 hours straight from their homes on Saturday 16th May to fundraise for the charity.

“Lockdown has been difficult at times; but the care team at Bluebell Wood have continued to reach out. We’ve been having weekly video calls with one of the counsellors, and Ella’s had music therapy sessions remotely.

“So many charities like Bluebell Wood are losing income because of the pandemic; I’ve wanted to raise money for the hospice for a while so this felt like the perfect time.”

Despite being keen cyclists, the event wasn’t without its challenges.

“Anyone who uses a turbo trainer – a stationary bike – knows that one or two hours is about the max you’d want to ride on one,” Mat explained.

“We both had some problems with our knees at around the four hour mark. On a turbo trainer you can’t freewheel going downhill and get that rest. My knees were really sore, but I managed to keep changing positions and stand up for a bit. It did ease up for a bit, but I knew even if I was in agony there was no way I wasn’t carrying on!”


Craig and Mat
Throughout their gruelling 12 hour ride, Mat and Craig were cheered on by friends and family, with familiar faces even dropping into Zwift – the online cycling program – to ride alongside them.

“Our brother Chris joined us for the last couple of hours, and Ella and Katie kept coming in and cheering me on every half hour. There was never a moment I felt on my own, which was really nice.”

Following their epic cycling stint, the pair have been amazed by the response they’ve received in donations. To date, the brothers have raised £4,660.88 including a donation of £1,000 from Mat’s employer, EDF Energy.

Craig said, “The generosity of people has blown us away; it really makes the few aches and pains we suffered worth the effort. The staff at Bluebell Wood do an incredible job; I know how much the charity means to Ella, Mat and Katie – not to mention all the other children and families they help. 12 hours on a bike really does pale into insignificance compared to what Bluebell Wood does.”

Sally Baker, Community Fundraising Manager at Bluebell Wood, added, “Mat and Craig are an inspiration – we’re incredibly proud of them for completing their gruelling #LetsPledge challenge, at a really uncertain time for everyone. It really is an amazing gesture.

“It costs £4.8 million to carry out our vital work each year, and every penny that Mat and Craig have raised will make a huge difference.”

You can still support Mat and Craig by making a donation at https://uk.virginmoneygiving.com/MathewBarrowcliffe1.

To find out more about Bluebell Wood’s #LetsPledge campaign – which asks supporters to pledge the hospice at a time that’s right for them – visit www.bluebellwood.org/letspledge.