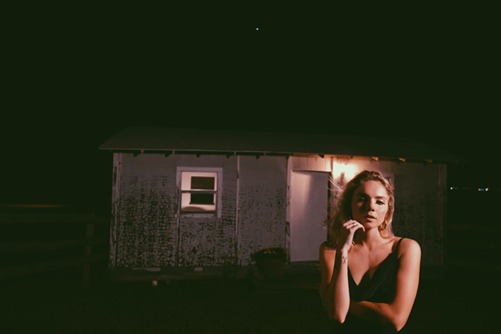 Texas born-and-raised singer/songwriter Danielle Bradbery has unveiled her socially-distant filmed music video for her empowering new single “Never Have I Ever”. Captured on a ranch in her home state with mom Gloria filling in as her glam team, the stripped-down video showcases her flirty and vulnerable sides as she gives one of her most raw performances to date. We caught up with her to find out more.

Tell us about the song you have just released…

When writing this song, we wanted to capture that feeling where you’re in a new relationship and you’re terrified of the intense feelings you have, but you’re so excited at the same time; we really tried to put that whirlwind of emotions into words. It’s honest, raw, and vulnerable, and I’m so stoked it’s finally out!

How do you feel when releasing a song?

I feel very excited! I get a little anxious only because I just hope people absolutely love it!

What inspired the song?

Relationships and love-at-first sights! I’m currently in a relationship and how we met is the perfect description of this song: very unexpected, but he makes me feel like no one else has before.

I like writing about what I know and my personal experiences--usually it’s whatever is on my mind that day. So, when we’re in the writers room, I’m able to bring those stories to life through song.. I want my music to be honest and relatable--so it has to come from a vulnerable place--and the only way I know how to do that is to write about my real feelings and emotions.

Only animal that pops in my head is a cheetah.

That’s a tough question because a lot of songs catch my attention. But, if I could choose a group of them, it would have to be Carrie Underwood’s albums. She’s so powerful!

The first songs I bought were JoJo songs.

Was JoJo and Avril Lavigne.

To be honest it was a Twenty One Pilot concert!

Just to be myself and really live through my music on stage!!


Also by Jeremy Williams-Chalmers...
Jay Blanes - FireworksShaun Escoffery - Strong EnoughKatherine Jenkins - Cinema ParadisoInterview With JeyBInterview With Ruby Turner
What other artist are you most excited to hear from?

I’m always excited to hear what Maren Morris is going to put out. The same with Kacey Musgraves. There’s a lot on my list though.

I would hope to record an Anthemic song!!

Thinking off the top of my head, I wish I had written, The Bones by Maren Morris. Such a good song!

Amanda Seyfried. A lot of people say I look like her.