Interview With Dante From Gun 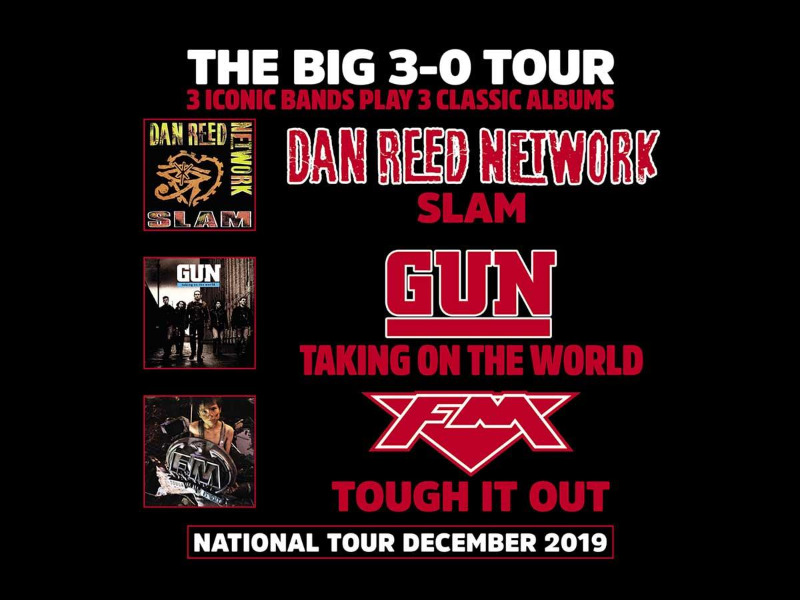 Scottish rock group Gun were one of the most successful acts of the early 90's. Now the band are going out on tour with The Dan Reed Network and FM. The tour reaches Leeds on Wednesday 18 December 2019.

The band are coming to Leeds, do you have any good memories?
I've played there many times with Gun and also my other band El Presidente, I remember the venue, The Cockpit - it was a crazy, fantastic venue but we are all looking forward to coming back to Leeds. On the tour the 3 bands alternate each night, we all do an hour each and we headline 4 of the shows, it's good for the fans. We are going to be playing our first album, Taking of the World, in its entirety which will give the fans something different.

What is the new album R3Loaded all about?
It is a collection of our songs, it is now 30 years since the release of Taking on the World. We did a cover of the Cameo track, Word Up and in 1990 we won a MTV European Award for it which was kind of special because we have been the only Scottish band to win an MTV European Award which I am quite proud of. The album is 2 CDs the first one is all our singles and the second one cover versions we have done.

The Glasgow Barrowlands is such an iconic venue have you ever played a gig there?
Definitely- it never fails to make the hairs on the back of my hand stand up. I live two minutes away from the venue. When we first played there our manager said to us to be careful out there because the fans will get over excited. I used to hang out at the nearby market when I was a kid, though it is not as popular as it used to be, people don't seem t go to markets any more.
The atmosphere though at the Barrowlands is fantastic, people let themselves go, the sound and acoustics are fantastic and with it being a ballroom the floor is spring loaded. We actually finish the tour there on 21st December and are headlining and will be playing a longer set.

Do you have any favourite venues in the UK?
The Shepherds Bush Empire in London is good, again it has a fantastic sound and is steeped in so much history. The Rock City in Nottingham is another one, but we haven't been there for years, I'm glad it is still there. It is a shame that the Cockpit in Leeds has closed down, I remember the dressing room was like a living room there.


Also by Graham Clark...
Feversham Arms Hotel, HelmsleyInterview With Diana DeMuthIt’s A Good Catch At The New Catch Restaurant In LeedsNew Exhibition In Blackpool - The LightsThe Potting Shed, Guiseley - Is All In The Garden Still Rosy?
Have you tried to do any cover versions that did not work?
All the time we do that, the new album is a lot of cover versions, I'm a massive Prince fan and I thought that we could do I Would Die For You but it didn't work, we got it to the stage where we were nearly there and nearly finished but it didn't work. It's like you can't take a Foo Fighters song or say an AC/DC song and make it sound different, whereas Word Up was a pop/rock song where we were able to make a rock version of the song.

Do you have any interests outside of the band?
I love making food and I am also a Celtic supporter but with being away on tour I don't get as many chances to see them as I would like. I do like to try new food though.

What is the most extravagant thing that you have bought?
Good question - probably a guitar, it was a Stingray Bass Guitar, it was around the time of the Taking On The World album, the guy who used to own it played in Bad Company and Mott the Hoople. I bought it from a shop in London down Denmark Street, I paid £1,200 for it which was quite expensive back then but it is one of the best things I've ever bought, I have recorded with it and played live with it - and I still have it.