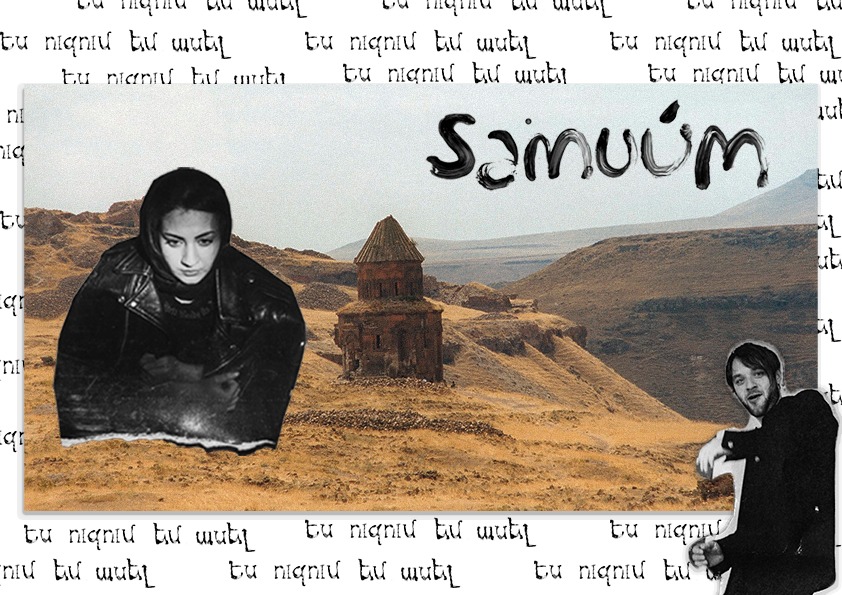 Based in LA, American-Armenian art-rap collective Sammum have just released their debut single ‘Maria’ and creative concept that challenges the norms of Middle Eastern Culture. Formed of former The Voice of Ukraine contestant Lusine Kocharian and Andranik Berberian, the duo take ethnic sounds and marry them to EDM and hip hop. It's truly inspired. Blown away by the release, we decided to learn a little more.

Lusine: Hello! Thank you, it’s been a slap-bang and lots of fun since the release.

Andranik: “Maria” is a special track. In it, we snicker at toxic traditions.

Lusine: The song is a story told by a girl: she lists out everything she has to take into account to be well regarded in the society she lives in, to seem “a nice girl”.

Andranik: The track feels like compressed energy. It inflates, grows and bursts out at the very end. It’s a sound metaphor of how suppressed and bound by traditions the Middle East women felt.

Lusine: I guess, the same goes for women around the world, as a whole. Women’s culture have been very much constrained literally until last decades. But it will all change!

How do you feel when releasing a record?
z
Lusine: It’s a relief. I’ve had a tough period, I haven’t sung since 2017, as I moved to the US. But now I’m ready to speak through a song again: to speak of pain I’ve been through, of my native culture, of
subjects I considered taboo. And the main thing is I  want to share the energy I’ve got now – there are tons of it. You may charge a phone off of me.

Lusine: In the nation I belong to girls are often forced to make a choice: love and family versus your work of love.  I’ve been through that as well. All of my feelings about that situation are here, on this record.

I don’t think it makes sense to speak of natural and full-fledged development of a person, as long as society drives the person into the boundaries with a choice like this.

Andranik: A meeting. I was taken from Armenia at the time of war in 1991. Since then, I haven’t seen my father for more than 20 years.  But in 2015 I flew back in. I just came into a gallery my father runs in Yerevan. That meeting energized me gazillion times. The emotions I’ve got from there made their way into tons of music and ideas for Samuum.  The bass line for “Maria” is from that period, too.

Lusine: So, this is what it looks like: I come to the studio to record the track Andranik and I agreed a day before. He writes a totally different beat and goes like: “Listen to this rad beat, could you sing along to this one? And we’ll finish that track later”. It drives me mad, but it works.

Andranik: “Bamboleo” by “Gipsy King’s”. I was 5, and I played it for my grandmother every evening, using a kitchen grater.

Andranik: It was just a week ago that I got myself Apple Music. I bought our song.

Lusine: A disc of the same K-Maro guy. I remember my mother worrying about me listening
to things like that.

Andranik: A bootleg version of a Backstreet Boys album. Bought it in a weird shop, something
like a grocery. In the 90s, in Ukraine where I grew up after Armenia this was a common practice: you buy tomatoes over here, you buy sweaters right next, and the very same place has a rack holding “Show Me The Meaning of Being Lonely”.

Andranik: Young Fathers in Kyiv in 2015. We went there together with Lusine. Five minutes into the show our t-shirts were soaking wet. Sweat, happiness, sub-bass. That is one grand band.

Lusine: Young Fathers have a completely phenomenal sense of partner on stage. They don’t need a dance crew, decorations or anything else whatsoever. They just have their playback and they’ve got one another.

The looks they give, their movements, the pauses they take, the way their bodies come close to each other - that’s maximum dedication to being in the moment.

Andranik: I thought that was something they strictly rehearsed, almost a theater play, but I’ve been to several of their shows and can say they interact differently every time, they do it anew.

Lusine: It is this ability to be completely within the moment of the song and to share that exclusive experience with the audience that makes you want to learn it for your own gigs.

Lusine: I think we could have gone to a monastery in the Armenian mountains, and recorded a choir there. Then, we would have cut the record into samples, written lyrics over that and released a conceptual album.

Gloomy, with temple reverb. By the way, we invite them to come. Accommodation – at our expense.

Andranik: Slowthai, M.I.A, Young Fathers. We have similar BPM in most tracks.

Lusine: Yep, a convenient set list. Like, start with Slowthai, followed by МIA, then us – so that the tempos only rose – and finish with Young Fathers. The audience will need a week time sleep after the set.

Andranik: System of a Down

Lusine: System of a Down

Lusine: “Toxicity” by System of a Down

Andranik: I do not speak Armenian. I liked the sound of Lusine speaking it and I thought it would be cool to make an album in this magical language. Hold it, I do know a couple of phrases: “I love you” and “out of money”.