Victoria Princewill
Engaging with a debut novel is one of my most highly treasured delights. Sans the osmotically invasive baggage of preconceived expectations, or the earnest entreaties of epistemophilia, I am able to allow these fresh voices to meet my sensibilities unmolested by the distorted prism of my preconceptions or canonical reverence. The pages themselves will debouch subjectively adduced authorial talent, or conversely cause me to consider its antithesis. It’s a profoundly scintillating leap into the unknown and more often than not, a delightful encounter with a new ally destined to join those already populating my perpetually groaning book shelves.

Victoria Princewill penned a debut of superlative quality, its prose equal to its thematic quest. Readers of this publication may have learnt my thoughts upon Princewill’s debut historical fiction, In the Palace of Flowers, as I recently reviewed her coruscating gem about slavery explored through the cynosure of a eunuch and a concubine set within the dying embers of the Persian court in Iran.

The novel’s humanistic truths are investigated with modulated sensitivity, emotional potency and all housed within dextrously employed architectonics, usually to be found scaffolding the works of critically acclaimed authors consummately deploying there maturely cultivated skills. In short, her debut is a triumph ably evincing an often overlooked truth…all talented authors began as debutants whose reputations burgeoned from the literary seedling of a first outing.

So, having found Princewill’s novel to be an unadulterated delight, I was keen to know a little more about its fledgling scribe. Princewill proved to be as complex and interesting as the characters suffusing her novel with their intelligence, integrity and contemplative sagacity. Like her characters, Princewill is an intellectual who responds to her heart and fearlessly confronts that which saddens it. She is also the product of a mind trained to philosophically interrogate life’s darkest truths and misdeeds in pursuit of empathetic understanding, melioristic truths and the bitter sweet dichotomies of the human condition and the cultural factors inimical to its wellbeing.

She described herself with a jaunty disregard for her academic pedigree and pre-authorial corporate career: ‘I’m a 30 year old, Brit of Kalabari (west African) descent. I studied English at Oxford, have a Masters in it and another in Philosophy from UCL and am currently studying an MSc in Neuroscience at King’s, which will move into a PhD at the intersection of philosophy of language, computational neuroscience and philosophy of mind. -- Basically I’m a huge nerd who uses every possible tool and angle to explore how the mind uses language to interrogate big questions. Be that science, storytelling, business whatever’.

‘Before that, I worked in the corporate sphere, in a slew of “brand” names: Accenture, Financial Times, WPP, Demos (a think tank) and a few tech startups. I Quickly realised I don’t enjoy working at offices or for other people so re-jigged my life to accommodate that. Now in addition to writing fiction, I post my opinion everywhere that people let me. So: Guardian, LRB, BBC World Service, BBC News, n+1, gal-dem, Independent and others’.

So, what does an investigative, restless mind choose as the muse for its authorial expression ? ‘I’ve always been obsessed with history -- and with the future and have been told I’m rubbish at living in the present, make of that what you will! But furthermore, whilst I love history, I’m not a stickler for the relentless precision of history. Historical fiction for me is the optimal place where I can bring my love of research and what I hope is a creative flare to the art of storytelling!’.

‘I’d say that historical fiction is less my genre than the other way around. The story comes first and that I was intrigued by these enslaved Abyssinians in Iran meant that to both tell the story and be a fiction writer and tease out whatever ideas or questions I wanted to, I’d sit the book in the sphere we call historical fiction’. 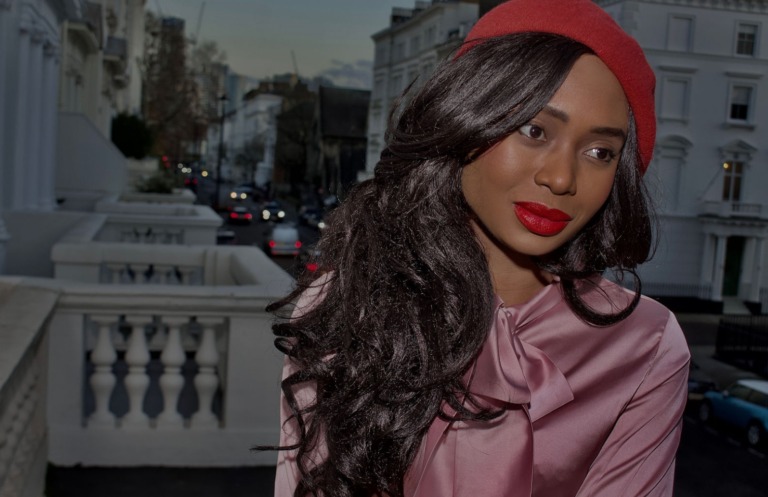 No author can escape the voices or influence of those who have entered their minds. Even a subliminal influence worms its way into their artistic psyche and this either produces a reductive mimetic voice or galvanises something far more precious…an authentic artistic response to life and its questions. Princewill, self-aware and savvy, knows which authors have won her admiration and most likely played a role in sculpting her own expression.

‘Middlemarch and that speech by Toni Morrison reveal a depth of human nature that I rarely see elsewhere. Middlemarch is profoundly candid yet subtle, Morrison’s speech is earnest but sly. Nafisi is famous for Reading Lolita in Tehran, but Things I’ve Been Silent About perfectly captures a brilliant woman who has become slightly curdled by the repressions of the time. This is at the heart of all I’m curious about -- how do we live? With outside constraints, that don’t just stop us doing xyz but mean that people will see us and not see all we wanted to do or be?’.

‘Purple Hibiscus has this very bold story you can see and this other one running beneath, Destiny Disrupted gives you centuries of history in a hilariously funny, rollicking story of cynicism and wonder and intrigue. It’s creative non-fiction (and to me that and historical fiction are two sides of the same coin). Snow Country and The Great Gatsby are books where the reader is almost writing the story more than the reverse. Both authors leave room for the reader to infer and project. They create vivid stories through inference. This is what I would long to be able to master, but for now I just enjoy it as an ardent reader’.

In her debut, Jamila inhabits the visceral and thematic heartland of her narrative, albeit counterpointed by her other chief protagonist Abimelech. Jamila is the fictional embellishment of a real life personage and I wanted to understand Princewill’s reasoning for basing her debut on a woman forgotten by history and left tragically voiceless.

‘I came across an article in the Guardian about images uncovered by Pedram Khosronejad. These were photos of Abyssinians in the Qajar court of Iran. The photos were taken by the Shah himself! This stayed with me and then sparked the Niffler in my head. Off I went to discover more and came across some academic texts, one by Anthony A. Lee which contained a letter written by Jamila. She had this letter that really only documented her ancestry and the men who enslaved her since. I felt the story needed more’.

‘I sought to marry the story of Jamila, an enslaved Abyssinian in Iran with the photographs uncovered, about unnamed enslaved people in the Qajar Iranian court, at pretty much the same time. So I placed her in the court and used it as a jumping off point to tell the story. I felt like I needed to do justice to the perseverance that meant her story had survived, even though it was so scant. She, to me, deserved a fuller story and thus In the Palace of Flowers became how I gave her that’.

Thematically, my review advertised my own interpretive conclusions. Whilst Intentional Fallacy is best ignored when responding authentically to a book, ascertaining what its author attempted to explore may be constructive. ‘I think the main themes I was interrogating were those around how our lives make sense to us. How do we find meaning in our lives, how do we make them meaningful? For people who are enslaved such questions are amplified. Why are we here if our lives lack meaning or value? Who are we to ourselves?’.

‘I wanted to simultaneously communicate how they saw themselves, how others saw them and what they strived towards and I guess imbue all of that with the reality of human frailty and human failing. How would all that it means to be human manifest in these characters, in their choices and their words’.

Beyond her deliciously elegant prose which never becomes an over-ornamented Rococo and therefore conspicuous attention seeking distraction upon the reader’s consciousness, Princewill has drawn upon one of literature’s most sacred truths: the reader’s mind fashions the cathedral of any book’s ultimate being.


Also by Paul Spalding-Mulcock...
“Love Is The Magician That Pulls Man Out Of His Own Hat”: A Marvellous Light By Freya MarskeExpecto Resurrectionem Mortuorum:The Gift - Book 1, Eleanor, by R. A. WilliamsLittle Liar Boy - A Hall Of Mirrors StoryThe Devil's In The Detail: Johannes Cabal The Necromancer by Jonathan L. HowardAn Audience With The Devil - A Hall Of Mirrors Story
‘It’s always a bad idea to overwrite and risk pushing your agenda at your audience. To write a novel, as opposed to a work of nonfiction, is to make room for the reader to bring their experiences of human nature to the book…the way in which they relate to the characters, to the storyline, will be based on their own lived experiences, it will be based on who they are. And so I write with that in mind. Once the book is published, it is no longer yours in the way it was as a manuscript. I always want to make sure I let the audience’s interpretation exist as a true one for them. I cannot say, “no” to what they took from the book. I think the story is elevated and enriched by the author and the reader’s combined contributions. And that to me amounts to a collaboration’.

Princewill is an author on a mission. ‘I do have another work of adult literature, in my head, a plan sketched out on a page. Historical fiction, of course, centring people unwritten, as always. But I cannot yet talk about it. For now it remains cradled to my chest. When I have time to deliver the whole novel, I will’.

Victoria Princewill has a magical, mellifluous voice…I look forward to seeing how she uses it to give one to those who have been silenced.
More in this series...
Review: The Stranding By Kate SawyerReview: You Let Me In by Camilla BruceThe Traumatic Legacy of Denial: The Sanatorium By Sarah PearseThe Imposter by Anna Wharton: A ReviewGirl In The Walls By A.J. Gnuse - A ReviewReview: Lightseekers By Femi KayodeAn Interview with Alice Ash - Author of Paradise Block‘ …Really Real Poor People, Surviving Alone Together’: Paradise Block By Alice AshInterview: Neema ShahKololo Hill By Neema Shah: A ReviewInterview With Catherine Menon - Author Of Fragile Monsters‘Ghosts Everywhere I Look. Ghosts Everywhere I Don’t’: Fragile Monsters By Catherine MenonInterview: Bethany CliftLast One At The Party By Bethany Clift: A Review'There Is No Such Thing As Fate, Because There Is Nobody In Control': My Name Is Monster By Katie HaleInterview With Frances Quinn - Author Of The Smallest Man'A Hero Of Our Time!': The Smallest Man By Frances QuinnInterview: Thomas McMullan, Author Of The Last Good ManReview: The Last Good Man By Thomas McMullanInterview With Nikki Smith - Author Of All In Her Head