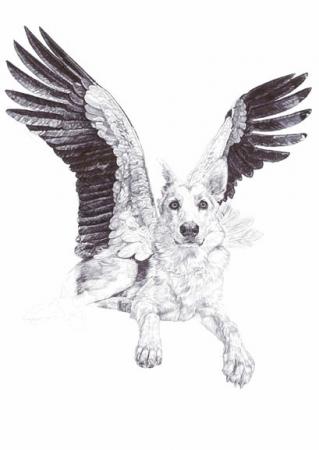 Winged-Dog by Jane Lee McCracken
Artist Jane Lee McCracken's intricate drawings in black and coloured Biro, which can often take months to create, explore her preoccupation with fairy tales, forests, war and wolves. Her new exhibition, The Woodcutter's Cottage opens at the Mercer Art Gallery, Harrogate on 6 July and runs until 8 September.

In the metaphorical dwelling of the woodcutter's cottage, the epitome of where all the best fairy tales are told, Jane Lee McCracken's installation brings together a collection of her Biro drawings and the objects inspired by them.

Jane says: "I think fairy tales were warnings to children about the brutality of life. They can be exceptionally brutal - like life is. But they can also be very beautiful. I hope to create images which are beautiful but which underneath reveal brutality. I like juxtaposing hope and beauty with darker forces."

Jane discovered a love for drawing in Biro, from creating small pieces of art on Post-It notes to larger-scale intricate multi-layered drawings using black or coloured Biros. Her subject matter comes from childhood memories, war, fairy tales, forests, animals, found objects, her pet dog and stills from iconic films. Her aim is to create beautiful drawings which are often symbolic of difficult issues such as the aftermath of war and natural disasters thus creating memorials of lives lived, both human and animal, and of ways of life lost. 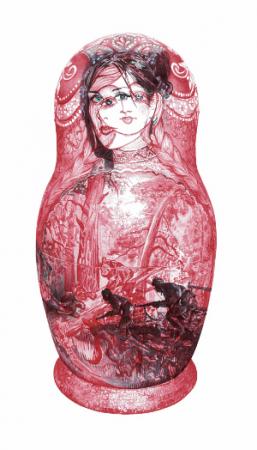 Russian Doll by Jane Lee McCracken
Jane Sellars, Harrogate Curator of Art comments, 'This year we are showcasing the work of three quite different women artists. Following on from a highly successful showing of new sculpture by Anne Thalheim, we now have the fascinating drawings and installation work of Jane Lee McCracken who is based in South Tyneside.'

Jane Lee McCracken was born in Scotland in 1968 and from an early age was fascinated with the idea of traveling the world, inspired by her father, who travelled the world during the 70s, 80s and 90s, from communist frontiers to the plains of the Serengeti thus kindling Jane's imagination for faraway places.

She developed a great love for animals that also became part of her art. After graduation in 1990 McCracken worked freelance as an illustrator. To support her developing practice she worked in various jobs in London, including as a park keeper and a tube train driver on the Northern Line of the London Underground.

The Woodcutter's Cottage has been organized in partnership with the Customs House Gallery, South Shields and South Tyneside Council