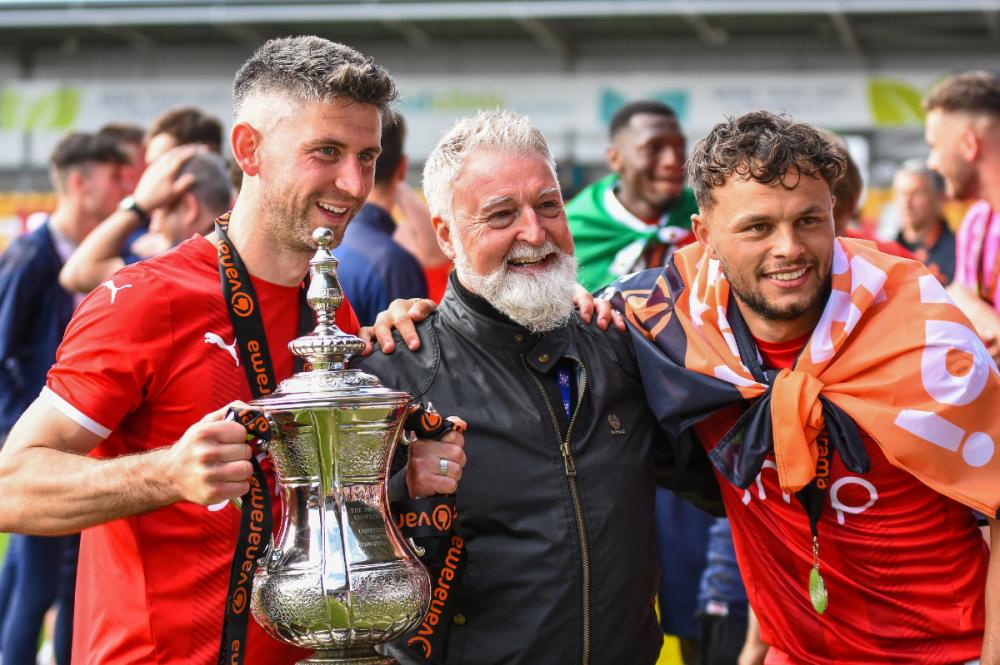 McGill initially joined his boyhood club as a director, subsequent to donating £50,000 when they were going through financial difficulties.

As Steve Beck, the chairman at the time, stepped down in September 2004, McGill took up the role of managing director at York City Football Club.

The 57-year-old was eventually made chairman by the start of the 2008/09 season, and continued in that position to this very day.

His latest great achievement is last season’s playoff final victory, a 2-0 win over Boston United which took City back to the National League after five years away.


McGill and JM Packaging’s shares of 75% have today been fully transferred to the York City Supporters’ Trust with the following statement being released from the trust:

“The Supporters’ Trust are pleased to confirm that today it has completed the purchase of 100% of JM Packaging’s shares in York City Football Club Ltd.

“In 2006, Trust members approved the transfer of 75% of the shares in the football club to JMP. Part of that takeover gave the Trust the right to purchase the shares back from JMP should they ever choose to sell them.

“In March 2022, the Trust reached further agreements with JMP and the football club to facilitate the transition to new ownership within a three month period. Today, those arrangements have concluded with the transfer of JMP’s shares to the Trust.

“The Trust would like to thank the enduring efforts of the York City board of directors, JMP and particularly Jason McGill. We recognise the huge time commitment and financial contributions they have made to help transition the club to the LNER stadium and provide a springboard to take the club forward for the next 100 years.

“Following meetings today with John Askey, Kingsley James and staff, the club will make further announcements about our exciting plans for the future.”

York City Football Club added to this with their own statement:

“Following the transfer of Shares held in York City Football Club by JM Packaging Limited the Board of Directors leave the Club having established their long-term objective of necessary stability which provides the Manager and Players with an enviable modern Stadium secured on a 99-year lease and with Net Assets of £4.2 million at 30 June 2021.

“The Directors also ensured advance rent for the Stadium of £1.65 million was paid to City of York Council thereby providing playing security for a 10-year period and during the first full-season within the new facility promotion to The National League was achieved.

“Our enhanced training facilities are the envy of many similar Football Clubs and Jason McGill would like to thank all staff at York City Football Club, York Stadium Management Company and the Foundation for their fantastic efforts and support over the years.

“In addition Jason McGill wishes to acknowledge with grateful thanks the very significant time and endeavour together with stoicism given by the Board of Directors who are, in no particular order, Steven Kilmartin, Ian McAndrew, Dave Penney and Richard Adams.”