Just Passing Through: The Valley Press Anthology Of Prose Poetry 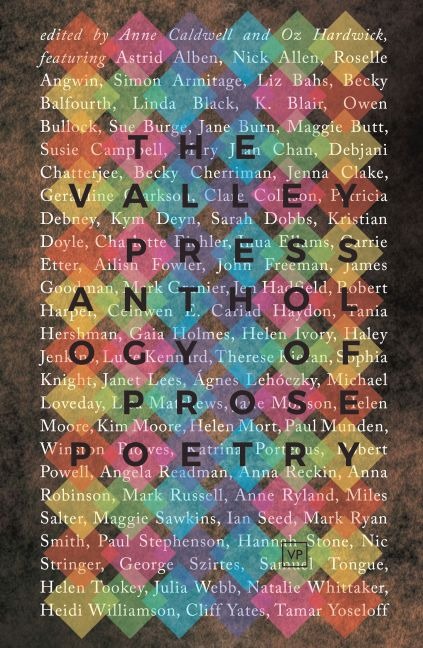 The beautifully written Introduction to Valley Press’ new anthology of Prose Poems is a mirror to that which it describes. This hybrid form of expression, with a ‘mercurial resistance to definition’, has many detractors amongst poetic purists, but perhaps its quality lies in its very refusal to be circumscribed. It is distinguished from poetry only in terms of lineation, yet it often fulfils the criteria of lyricism and distillation of meaning by which we measure its enduring counterpart.

And it is ironic that the trenchant ambiguity of editors Anne Caldwell and Oz Hardwick’s words echoes, to no small degree, the protean, uncertain dynamic of many of the anthology’s contributions. Their preface concludes:

‘Prose poetry: a form that both combines and resists; a developing photograph; a hall of mirrors with the lights switched off; a Promethean form for unstable times’.

So much of the collection is shadow-play; it seems that an inability to find resolve is symptomatic of the ‘unstable’ landscape we inhabit, and prose poems are the definition of an occluded border between one form and another. Perhaps we should not be surprised by the curatorial direction here: Oz Hardwick’s own enthusiasm for prose poetry is well established, as is his recognition of its unique positioning. And if that very sense of uncertainty is particularly current to our era, prose poems are best placed to describe, perhaps even embody, the complex problem of interpretation.

In a thorough, courageous and deeply affecting concatenation of voices, which includes poetic luminaries alongside those less frequently heard, the editors have found a way of devolving power from the established centre by roving unrestrained amongst themes visible and invisible, allowing the occupation of poetry’s imperfect tenure. 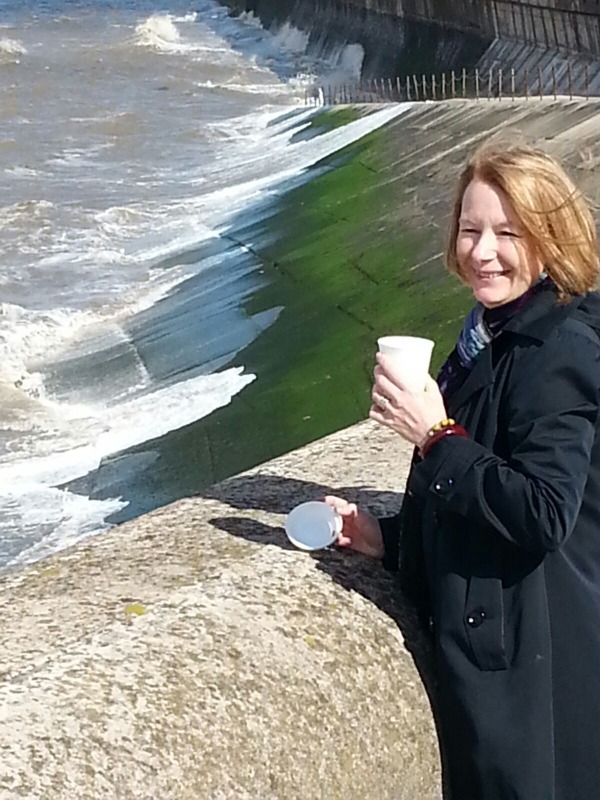 Anne Caldwell
If, as Caldwell and Hardwick suggest, the contributions here communicate invisibly, it is a testament to their curatorial skills, but more likely gives notice of an intuitive understanding that the capacious range of styles and forms on offer are conjoined in the light of the conditional. Nothing binds these prose poems so much as a reaction to changing times, and anxiety is rendered meaningful in strange taxonomies of ideas, halting syntax, and surreal juxtapositions of images whose tentative re-arrangement pulls the rug out from under pre-conception.

Geraldine Clarkson’s inventive observation ‘My Mother, the Monsoon’ identifies human idiosyncrasy through the furniture of domestic lives, by conflating the two in an intimate economy of meaning:

‘This family is a becalmed army, idiot with sealed
passion. Mother has climate change for a personality. I have become one of the draughts in a stately home, brocade-curtained and visited nostalgically’.

Clarkson’s assiduous condensing of ideas undermines poetry’s claim to an unassailable freehold. And the same may be said of many other examples here, whose compulsion to express something intangible is bound to threaten the territorial borders of conventional poetic form. And, on the whole, they succeed in reflective isolation. From Kristian Doyle’s wonderfully succinct paradox dividing the fragility of the human frame and the robustness of creative genius (‘Forget the Humans’), to the lexical delicacy of Susie Campbell’s description of the insinuation of coral-based bone implants into the human body, a melding of forms is given up to close scrutiny:

‘The second year, they X-ray me: screw deeper into the marrow. Seas pour in, circulate my head until the brain is sponge. A bone-locked ocean booms. Words dissolve: vowels snag on teeth, consonants wash from my tongue.’ (‘Reef’)

And words, incautious and beautiful, are extruded into being in the aftermath of surgical intervention, as bound up with the pain of assimilation as Sinéad Gleeson’s exegesis in her book-length prose-poem, Constellations. The artisan wordsmithing of Robert Harper in the ‘Carpenter’ is self-reflexive to the extent that his form – poetic dovetail, if you like – is a mirror to the process of creation. Here words and syntax are skilled manufactures, repositories of intricacy as painstakingly wrought as the ‘cross / lap, tongue and groove; mastered / by the hours of craft, of graft, / toil & sweat’.

But the keynote is provisional, a tentative nose through terrains half-recognised or shaped by anticipation: in fact, the sheer number of turns taken blindly, into the unknown and open-eyed to possibility, yields the sense of a generic guiding hand. Cliff Yates’ inhabitation of the ‘life’ of a novel is unsettlingly relevant in a time of fake news (‘All You Need to Know’), and Claire Collison’s surreal moment of displacement in ‘You Were Served Today By Janka’ is a corroboration of her own opening inference, that ‘In transit we are all suggestible’.


Also by Steve Whitaker...
Poem Of The Week: 'Snow' By Edward ThomasSong Of The Wind: White Ink Stains By Eleanor BrownReview: Life In Our Hands at Settle StoriesPoem Of The Week: 'Everything Is Going To Be All Right' By Derek MahonAnd So The Wind Blows: Poems From A Green & Blue Planet
That transit extends, elsewhere, to the power of memory for arching the past sharply into the present. Inua Ellams’ disturbing ‘Ghetto van Gogh’ obstinately refuses to conform to narrative expectation: deforming a moment of lachrymose forgiveness with an act of brutal violence, the seeming contrition of a figure awaiting execution for murder turns the blood-red of heredity, vengeance and Tragic necessity: ‘You / should have told me, mother’, cries the murderer, ‘what I did was wrong’. The brutality of the past, in Lisa Matthews’ fine evocation of threadbare Tyneside existences (‘Signal On’), finds a potent symbol for decrepitude in the overwhelming presence of cockroaches. A golden passport to the illusory promise of a council house - the rented garret is a rite of passage - the ‘roaches’ a corollary of endurance and survival amongst the lino and Bakelite of a different time.

The dead, in fact, stalk the margins of this anthology as co-existences. Anne Caldwell’s hypnotically-observed mental journey through the hinterland of the steep-sided Calder Valley is genuinely affecting - the presence of ghosts as palpable as the ancient paths through Crimsworth Dean whose depressions are history’s footfall. The sensing of ghosts, here, is premonitory, and as persuasive as to dissipate the hegemony of reason:

That the dead and living may fleetingly inhabit the same dimension is the mutable terrain of the poet as much as of the psycho-geographer. In Jane Burn’s forensically-observed ‘Picture of the Dead Woman as a Bride’, an image unfolds within an image: the impossibility of distinguishing the cause of the young bride’s much later suicide in the ingenuous appurtenances of her wedding day appearance. In the end, a deliberate elision and an invocation of release yield a haunting suggestion:

'I put my palm over half of the photograph, blank out the man so I see only her. She is untethered, floats from the portrait. A rising cloud.’ 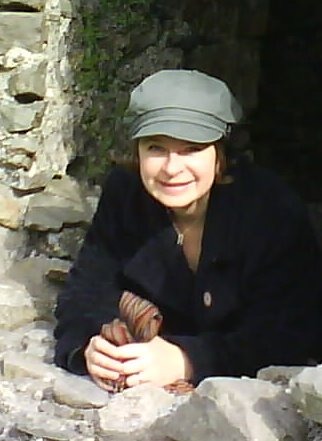 Helen Tookey
Here, and very frequently elsewhere, we are reminded of a transitory urge which seems to be encouraged by immersion in this most borderless of forms. Moments of sudden existential indecision, of displacement, characterise narratives whose boundaries are necessarily occluded. Helen Tookey’s poem of peripatetic anxiety, ‘Halb null’, concludes in resonant uncertainty – ‘But for us, time had slipped through our fingers, it / seemed that we might never get back.’ A vicarious flâneur, the child in Katrina Porteous’ ‘Tinkers’ Fires’ is seduced by a colourful inventory of the traveller’s accoutrements before catching his itinerant splendour in an epigram of both historical continuity and transience:

‘their fires became a mystery I longed to enter; out of which I summoned, like a cave-painter, in charcoal and ochre, the hot dung smell, the hoof-print, of whatever is ephemeral, fugitive, itinerant, just passing through.’

And it is to the notions of displacement and deracination, in both figurative and experiential senses, that Valley Press’ deeply rewarding volume returns, as though endless contemplation was a precondition of the prose-poem’s inherently open-ended form. Tamar Yoseloff’s sparse and focussed ‘Occupation Road’ might be a refugee camp caught between exodus and nowhere as ‘the train stammered over the / tracks at dusk’. But the precision of Paul Stephenson’s sardonic take on supranational crises of war and emigration takes a scalpel to European anxieties with a well-timed excoriation of a 2016 Danish law which allowed the seizing of refugee assets. Imagining police powers extended to the countries of refugee origin, Stephenson’s brilliant dissection of a self-serving nationalist myopia which is at once ridiculous and dangerous, bears ironic echoes of an earlier rage for territorial expansion:

‘Under new laws, they seized the corners of every foreign field, the brambly brims and crinkle-cut brinks where, year on year, young couples had been betrothed.’ (‘The Danish Vote’)

At their best prose-poems connect us with a bigger picture, act as conduits for empathy and compassion, and as filters for the surreal, the deformed, and the deranged.