Occasionally, it may be better not to read the synopsis of an opera before you go to see it. There is something to be said for just securing a seat and responding spontaneously.

Take Káťa Kabanová (Katya Kabanova), for example. A typical account of the plot might include: “… a provincial town ...unhappiness and harsh words … forebodings … married woman … lover ...disaster … throws herself into the river”.

It would seem that my axiom of thumb – if an opera has a woman’s name in the title, she will be dead by the end of Act 3 – is about to be re-enacted.

So you wait, apprehensively, in Row K, wondering what a Director is going to do with these dark themes. 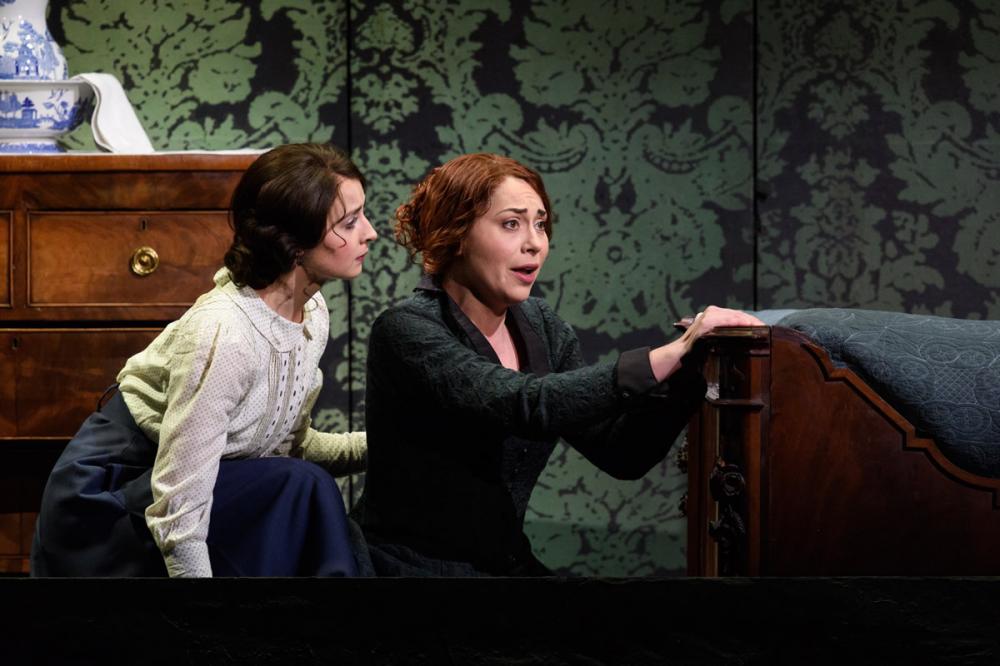 Opera North's 2019 production with Katie Bray as Varvara and Stephanie Corley as Katya. Photo by Jane Hobson
Typically, during the overture, the scene is set by a shadowy group of individuals occupying a dark anonymous space. Aqueous lighting turns the characters into specimens to be examined in the bottom of a tank.

The worst of these specimens, and the most in need of psychological repair work, is Kabanicha, Katya’s mother in law. It matters little whether she is on stage or not, her malign influence is pervasive, but when she is part of the action, she dominates all. The role calls for acting of the highest order.

Caught in the her own minefield of guilt and fear of social condemnation, Katya, slowly comes apart. Her problems are compounded by her choices in men. There is the mother-submissive husband Tichon, who compensates for his inadequacy with alcohol. Boris professes love for Katya, but quite readily leaves when the uncle he depends on for cash orders him away on business. 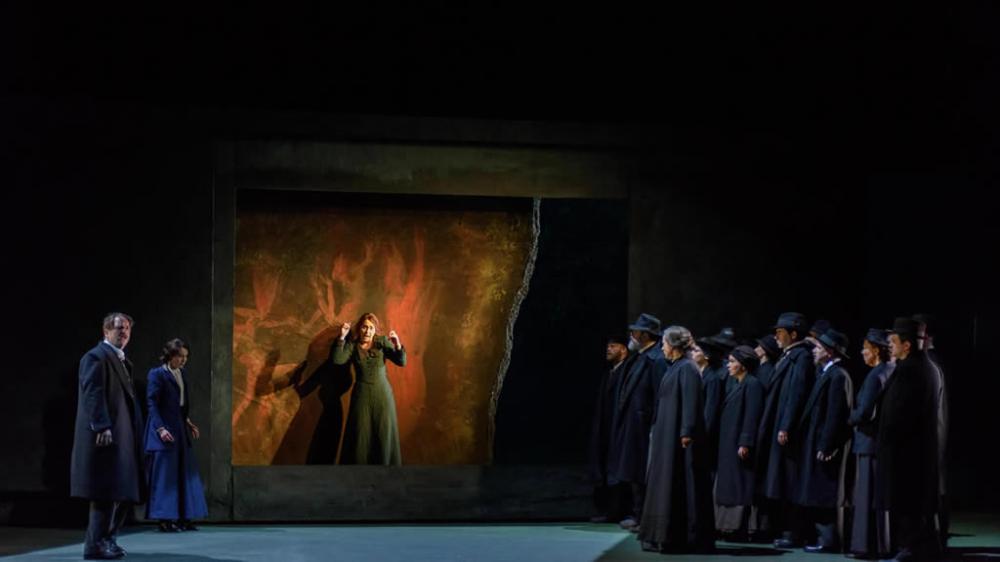 Andrew Kennedy as Tichon, Katie Bray as Varvara, Stephanie Corley as Katya, Nicholas Butterfield as Kuligin, Stephen Richardson as Dikoy and Heather Shipp as Kabanicha with members of the Chorus of Opera North. Photo by Jane Hobson
Racked by guilt, and without any real reason for doing so, Katya confesses to her tumble in the bushes with Boris and walks into the river, One by one, characters leave the stage, as they had done when the overture was playing.

Janacek was writing in a time when social condemnation of female infidelity was far more strident in Western culture than it is now. Remarkably, he penned this tale of passion when he was over 65, along with several other master-works. A model for all us late developers.

At one hour forty minutes, uninterrupted by intervals, Katya Kabanova is a powerful and intense work. Sombre it may be, but Janacek’s music is so powerful it seems like no time at all before the curtain comes down.

We are left wondering, just where do you put the stress in Kabanova?
More articles in this series...
Gloriana by Benjamin BrittenAkhnaten- Philip GlassTrouble In Tahiti - Leonard Bernstein