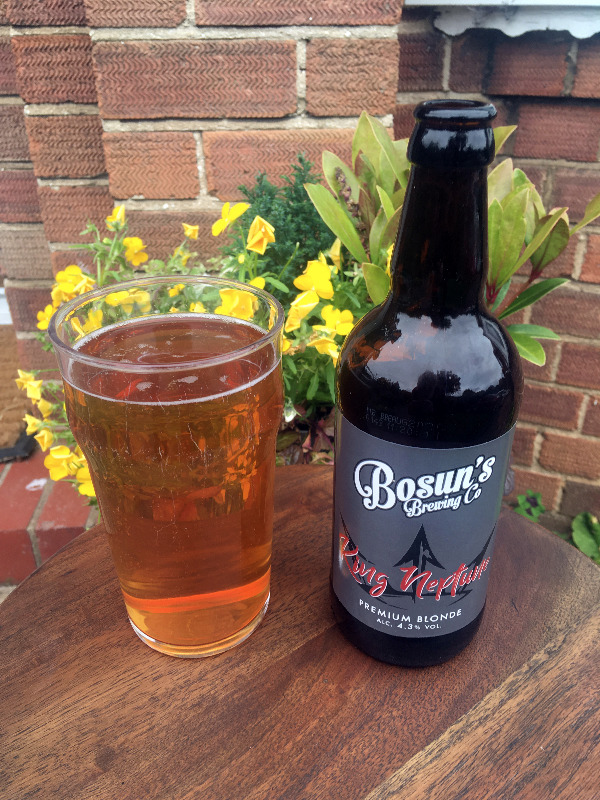 The Wednesday Wallop is King Neptune, a premium blonde, brewed in Huddersfield by Bosun’s Brewing Co.

When Richard Marsden and three partners acquired Bosun’s in February they had no idea of the ‘baptism of fire’, as he puts it, that lay ahead. Within weeks the whole industry was practically closing down due to the pandemic.

Fortunately, because of Richard’s background in IT, he was able to quickly set up an attractive and informative website ( www.bosunsbrewery.co.uk ) to promote their products. For the first time in the company’s eight-year history, they began to bottle their beer for sale commercially (using the excellent Morrow Brothers of Preston) and sell it by home delivery in West Yorkshire, shipping it across Great Britain as well.

The number of orders from the trade they have had in the last couple of weeks with pub-reopening in the offing has been very promising and suggests they have weathered the storm. This is an apt metaphor, perhaps, for the firm originally founded, in Wakefield, by Graham Andrews, whose naval background had led him to call it after the boss of the deck, the Bosun. Graham retired for health reasons but he remains only a telephone call away to offer advice if needed.

Their new ten-barrel kit, in Huddersfield’s Prospect Business Centre, is capable of producing some 8,500 litres per week and they have plans, post-Covid, to expand and take on a sales manager – in addition to the present staff of three, Richard, head brewer Garry Preece, and ‘dray lady’ Rowena Esp.

‘What we brew here is all about supply and demand,’ says Richard, showing me around, casting a wave over the state of the art equipment, the fermenters and conditioning tanks. ‘Blondes are very popular at the moment but we have seven core products and make seasonal adjustments, brewing more dark ales in winter months.’

In his late thirties and full of drive and enthusiasm, Richard has plans, aided by the business acumen of his partners, to eventually own a chain of brewpubs across the county. With beer as good as this, he must have a very good chance. He runs me off a pint.

‘Now we’re talking!’ I say, the first heady taste upon my tongue, starting sweetish and fruity, before the hops bring in a becomingly light bitterness.


Also by Andrew Liddle...
Theatre In The RowntreeAugust's Beer Of The Month - Rooster’s Craft Beer PerfectionMixed Reaction To Brewing Tax ReformsSwing That Music At Lawrence BatleyThe Fat Cat At Kelham Island. Where History Was Made
The King Neptune is billed as ‘a full bodied blonde, light golden in colour and brewed using American hops. It has a very fruity nose and finishes with a burst of citrus and grapefruit flavours.’

Clear, golden in colour, smooth-bodied with a quickly-disappearing head and the most delicate fruity, hoppy, malty aroma, it tastes exquisitely of herbal hops, citrus fruits, delicate malts. There’s a hint of raisins, perhaps, and, yes, I get the fresh clean taste of grapefruit at the back.