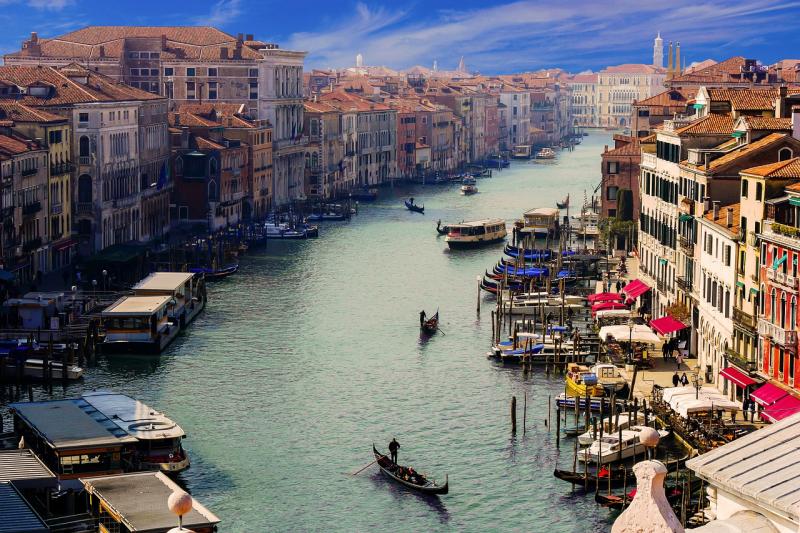 Venice. Photo by Gerhard Gellinger
As I write, the English winter seems to be finally giving way to warmer weather. Everywhere, people are sitting outside the coffee shops, grazing on sharing-plates of cured meats and preserved fish and sipping on Aperol Spritz. I wonder if they realise how much of our modern lifestyle has its origins in the history of a tiny city at the head of the Adriatic.

I love Venice. I love its art, its culture, its music. I love the cool of its churches, the shimmer of the light on the canals, the sounds of its busy squares and the silence of its streets at night. I even love the smell of the mud!

I wrote in my blog this week about discovering spritz as an aperitif drink when I first visited Venice about 15 years ago. 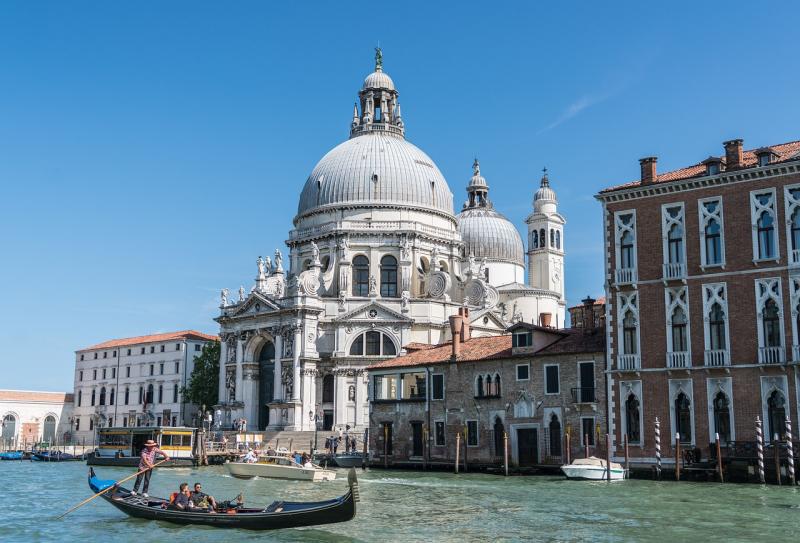 Photo by Michelle Maria
Nobody really knows where the Venetians came from. A quick look at any native will tell you they are most certainly not Italian: shorter, fairer and often with blue eyes. Whatever their origins, it is generally agreed that these first inhabitants settled in the dank, misty islands of the Venetian Lagoon around the time of the collapse of the Roman Empire. They are accepted to have been refugees, fleeing the invading Hun and Germanic tribes. Who else but refugees would settle in such an unpromising spot? Many of the 118 islands are submerged at high-tide even today. The shallows are muddy and difficult to navigate. The inhospitable nature of the lagoon, however, became its greatest attraction: it was safe. Not only was it safe, but food was plentiful. The Lagoon teems with fish and shellfish, and with various aquatic and wading birds.

One commodity the area had in plentiful supply was salt. Salt has been man’s principal means of food preservation for thousands of years. Refrigeration has only really been possible in any practical sense in the last 70 years. Salt, easily harvested in the shallow waters, provided the islanders with a trading commodity to secure their newly-established republic (the first elected council meeting in 568). In 866, Venetians embarked on an expedition that would characterise both their trading and military activities for the next seven or eight hundred years: they sailed south to attack and overpower their main commercial rival, Comachio. Comachio, at the time the region’s foremost trader in salt, and therefore a rich and powerful settlement, has never since recovered its importance in the region. With the economic advantage of an inland market for its salt, Venice was now able to trade for other commodities with which to fortify the city: wood for ships, metals, building material. Now fortified, the city could push its advantage, always seeking new markets for its products.

The Veneto plains are lush and rich, regularly irrigated and refreshed by the Po and Piave rivers. As the city expanded and needed to feed its growing population, it looked inland for opportunities. Its military power enabled it to annex these areas for food production – once it had stripped them of wood, which could be used for building up its maritime fleet and, of course, traded for other valuable commodities. At first, the area simply extended the agriculture of the drier islands (such as the famous artichokes of Sant’Erasmo), but they really came into their own when maritime trade brought the water-intensive staples of rice and corn. Very few pasta dishes are associated with Venice, but she’s blessed with hundreds of risotto and polenta dishes! 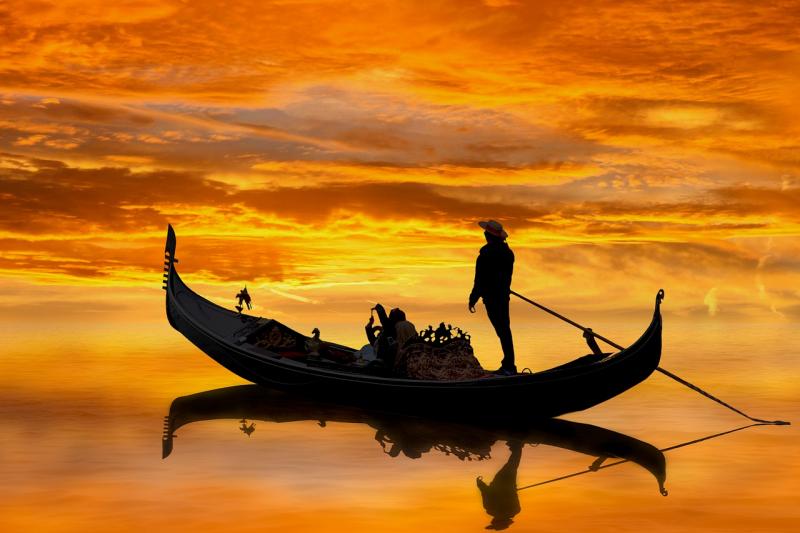 Photo by Gerhard Gellinger
In 1081, a Venetian fleet sailed to the assistance of the Byzantine Emperor against the Normans. Needless to say, this was no more a philanthropic expedition than the British expeditions to India seven and a half centuries later! In return for her help, Venice was granted important trade concessions, establishing her as Europe’s principle broker for trade with the Muslim east. Just over a century later, the Doge joined the Fourth Crusade, led the attack on the city of Constantinople and seized control. With Constantinople sitting on the edge of Asia and at the head of the Silk Road, Venice could enjoy sole control over all trade with the Middle and Far East. Although the great city was lost again to the Lascari in 1261, the mighty Venetian fleet continued to control the Adriatic and Eastern Mediterranean. Over the next four centuries, Venetian merchants held monopolies on the import into Europe of citrus plants, pepper, cinnamon, cumin, fenugreek, turmeric, mace & nutmeg, cloves, myrrh, frankincense, balsam, coffee, sugar, silk, lapis lazuli, rubies, sapphires and most emeralds. It’s no wonder the Spanish financed Columbus’s expedition to find an alternative route to India!

The warring cities and principalities of the Italian peninsula would grow to resent Venetian power and wealth. Constantly looking over her shoulder to assess the threat from inland, she needed to seize control over ever greater territories. By the fifteenth century, Venice ruled most of north-eastern Italy, the Adriatic coast and significant parts of Dalmatia. This vast domain encompassed the wine-growing regions of Soave, Abruzzo & Valpolicella, the game-rich Dolomites and parts of Romagna around Modena and Parma. Although it would never be possible to raise livestock on the islands of the now overcrowded city, these more distant possessions furnished the wealthy tables of Venice with pork, hams, beef, cheeses & butter, game birds and wild boar.


Also by The Aperitif Guy...
A Brief History Of GinLocal 4 LentA Taste Of Italy, All The Way From LeedsRemembering Robbie Burns Over A Glass Of WhiskyWinter Warmers
At the height of its great wealth, power and glory, the city suffered a major disaster. Epidemics of bubonic plague hit the city in both 1630 and 1631, having already hit twice in the previous century. The 1631 outbreak claimed a third of the city’s citizens, seriously weakening its ability to maintain and defend its position as the foremost state in Italy. By the time the British nobility started to visit as part of the Grand Tour, the city was already in decline, but it is from this time that the city’s Carnival’s reputation for sexual licence dates. Carnival was already a time of excess, a time to enjoy bodily pleasures of food, drink, gaming and courtship for one last time before embarking on the discipline of Lent. Masks, originally worn to hold astringent herbs around the mouth and nose, as a protection from plague, had the additional effect of disguising the wearer’s identity, and this disguisement allowed for a more liberal social mix than usually possible in Venice’s normally highly-stratified society. With the population so badly reduced, the nobility in particular was in grave danger of being weakened by interbreeding, so it was worth turning a blind eye to a few anonymous liaisons in the interest of the city’s gene pool!

By the end of the eighteenth century, after seven centuries commanding the waters of the eastern Mediterranean, the Venetian fleet was reduced to just one ship. Her mighty trading power diminished, she remained a small, slightly inward-looking manufacturing centre (mainly glass and munitions). Unable to maintain her own defences, Venice fell to Napoleon Bonaparte’s army on 12th May 1797, during the War of the First Coalition, and the Doge was forced to abdicate. Her territories were handed to the Austrians as part of the peace settlement between the two Empires, and they took possession of them in the following year.

But the mighty and glorious Venetian Republic is still worth remembering and celebrating: a city unequalled in its beauty; a city rich in history and culinary genius; the city that gave us coffee shops, salume, polenta and risotto; the city of Marco Polo, Vivaldi and Canaletto; the Queen of the Adriatic – the Most Serene Republic of Venice.

The Aperitif Guy has a regular blog at blog.theaperitifguy.co.uk or you can follow him on Twitter @AperitifGuy