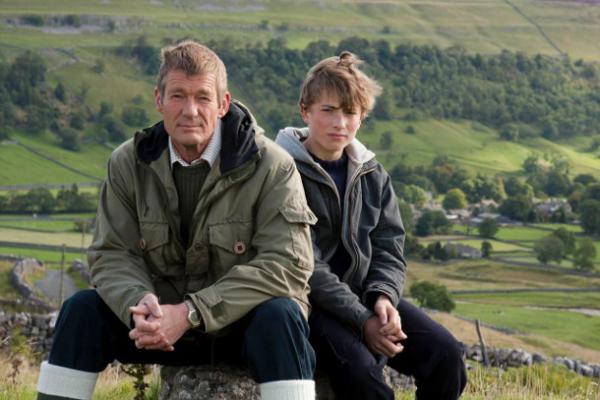 Tom and the ranger. Photo by Chris Hodgson
The eagerly anticipated local coming-of-age story of friendship arising from adversity Lad: A Yorkshire Story arrives in Yorkshire cinemas this week.

After a brief tour of the UK, Lad heads-out to the international film festival circuit: The Anchorage Film Festival, Houston, Texas WorldFest and the Hollywood Family Film Festival to name but a few.

The film is a story about Tom Proctor, a young lad thrown into turmoil at the loss of his father.

When Tom's dad dies, his world falls apart - his brother joins the army, his mum is threatened with eviction and Tom faces criminal prosecution after spreading manure over the local bank branch.

All this changes however when Tom meets park ranger, Al Thorpe in this inspiring story of two individuals overcoming adversity and finding true friendship

Dan Hartley, writer and director explains the origins of the film, "I grew up in the Dales. Every formative experience I had was shaped by the landscape that surrounded me. I can't begin to describe just how powerful that feeling still is to me today.

"In telling this story I'm coming home. I'm returning to the villages and communities that I grew up amongst and to my great delight I'm finding that the inhabitants are the same people that I grew up with. The boy from down the street is now married to the girl who lived in the farm. The builders merchant, the publican, the quarry man, they all still live here, drink there, celebrate this and disagree about that. The communities that I left behind when I was sixteen live on and I want this film to be celebration of that.

"The ranger in my life was a man called Al Boughen whom I would accompany during school holidays and weekends. He was a stalwart of the community and a steward of the countryside and for a time he was a father figure to me.

"In 2010 he passed and I'd like to dedicate this film to his endeavours."

Lad. A Yorkshire Story is previewing in cinemas across the region:

The Yorkshire Times film critic, Dave Rogers, will be reviewing the film on Friday 29th March.