Leclerc On Top In Bahraini Ferrari 1-2

What is set to be the longest ever Formula 1 season got underway at Bahrain’s Sakhir circuit this weekend and it was Ferrari’s Charles Leclerc who emerged with the victory spoils ahead of team-mate Carlos Sainz in today’s Grand Prix.


Charles Leclerc relaxing in Bahrain before leading his team-mate to victory
On the preceding Monday Sir Lewis Hamilton, whose current full name is Lewis Carl Davidson Hamilton, had revealed in Dubai that he is changing his name to include his mother’s surname Larbalestier. When he was just two years old his father Anthony Hamilton had separated from his mother Carmen and the future seven-time champion grew up with her for the next ten years before moving to live with his father, stepmother Linda and his half-brother Nicolas.

In other news, Hamilton’s arch rival last season, Red Bull’s Max Verstappen, arrived in Bahrain as the reigning champion, explaining that he has nothing to prove despite the contentious end to last season. The Dutch racer simply cited the facts that during the 2021 campaign he was the driver who had achieved most wins, most poles and most laps led and that the focus should not be solely on that now infamous final round in Abu Dhabi.

Staying with the driver theme, McLaren’s Daniel Ricciardo had been forced to miss the final pre-season test days due to Covid, but was happy to be back alongside his team-mate Lando Norris, ready for the on-track action to begin. Sadly Aston Martin’s Sebastian Vettel tested positive for the virus just before the event began and was forced to miss the whole weekend, with their experienced German “super sub” reserve driver Nico Hülkenberg delighted to take over his car from first practice onwards. Every cloud has a silver lining, as they say.

A revised version of the 2022 FIA F1 Sporting Regulations was published last Tuesday incorporating a small but significant amendment to the Safety Car rules, which it is hoped will help to avoid any future recurrence of the Abu Dhabi controversy. The wording of the relevant regulation now requires “all” lapped cars to pass the leader and the Safety Car before a restart. It was highly appropriate for this issue to be tidied up before today’s race as there had been the need for a Safety Car intervention at all of the previous five Bahrain Grands Prix. Also, the FIA yesterday revealed its report into last year’s final race, concluding that Race Director Michael Masi had acted “in good faith”, but that there had been an element of “human error” too. 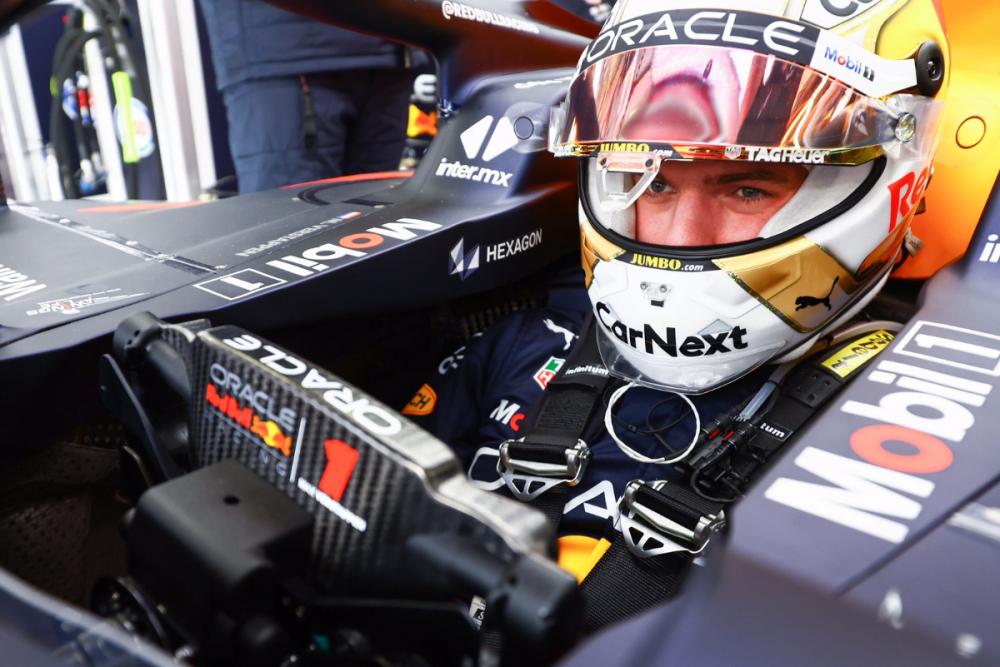 Max Verstappen had looked set for at least second place before being forced to retire
On the calendar front it seems likely that Qatar, which hosted its first ever Formula 1 Grand Prix last November and has a ten year contract to hold further races wef 2023, is likely to fill the gap created by the cancellation of this season’s Russian event on 25 September and a return to Las Vegas next year may well be on the cards (apologies for the pun!), with an announcement due shortly.

Back at the circuit in Bahrain the official Drivers’ Press Conference took place on Friday morning before opening practice, its timing having been changed from its usual Thursday slot of previous years in order to shorten the Grand Prix weekend schedule from now on. The German Niels Wittich, one of the pair of alternating new Race Directors following the departure of Masi, soon made his presence felt by issuing a no-nonsense edict to the drivers about track limits being defined at every venue from this weekend onwards as simply the white lines at the edges of the circuits and not the kerbs or anything beyond. The clear message was “ignore this (other than in avoidance of an accident) and expect the consequences.” A really positive, if long overdue move seemingly welcomed by all, including yours truly. However, it was regrettable that this change of policy then didn’t appear to be applied consistently during qualifying.

Friday’s first practice session had begun at 15.00 local time (noon back in the UK), but was soon interrupted by red flags to allow recovery of debris on the main straight deposited from the disintegrating righthand sidepod of Esteban Ocon’s Alpine. AlphaTauri’s Pierre Gasly subsequently topped the first timesheets of the weekend ahead of Leclerc and Sainz plus the Mercedes of George Russell. Verstappen posted the fifth fastest time, with Hamilton in the other Mercedes seventh.

The second practice period was always due to be more representative with regard to the track conditions as it began at 18.00 local time, the same as for the following day’s qualifying hour and today’s race. Verstappen emerged on top, albeit only 0.087s ahead of Leclerc, with Sainz and Russell again third and fourth quickest, and Hamilton only ninth as he continued to struggle with the handling of the new Mercedes car. 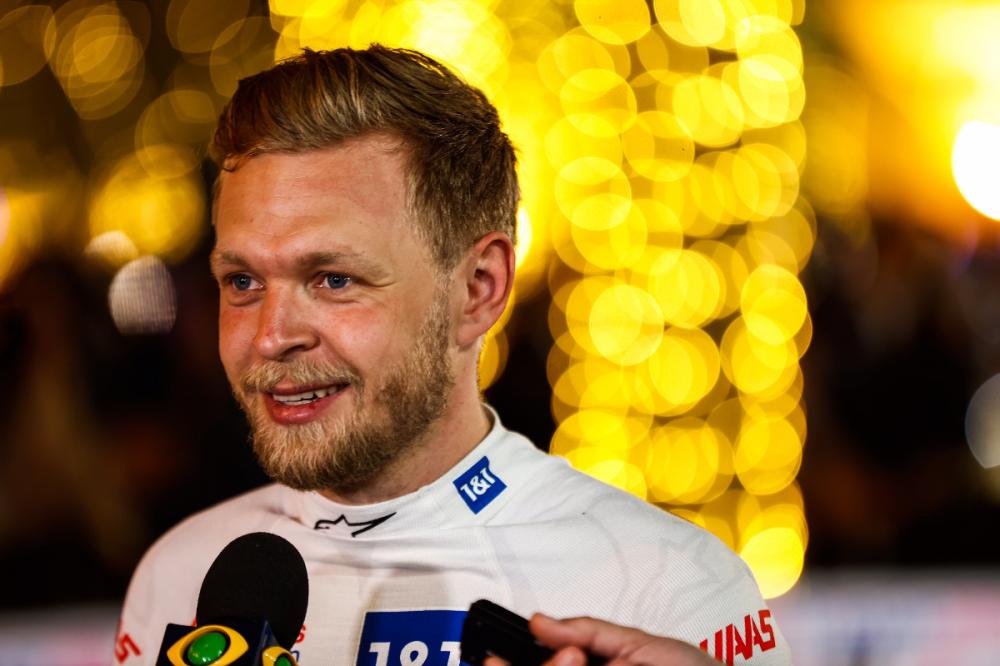 Haas’ Kevin Magnussen claimed a well deserved fifth place finish on his F1 return
Verstappen again headed Leclerc in yesterday’s final practice session, with Red Bull’s Sergio Pérez and Russell the best of the rest, before the all-important qualifying process followed. It was so refreshing to see the likes of Haas (yes, Haas, last year’s pointless bottom of the table team) have a driver achieve a thoroughly deserved top ten starting position in the form of seventh placed Kevin Magnussen, with his team-mate Mick Schumacher twelfth. Valtteri Bottas certainly enjoyed claiming sixth on the grid for his new team Alfa Romeo, starting alongside his former Mercedes colleague Hamilton and ahead of a disappointed Russell in ninth. The Ferrari power units were clearly working well, including for the works team from Maranello as Leclerc took pole position and Sainz third. Verstappen ended up joining his Monégasque opponent on the front row, just 0.123s slower, with Pérez just behind him in fourth. It proved to be a tough day at the office though for McLaren, with Ricciardo knocked out after the first part of qualifying and Norris failing to reach the top ten shootout.

A simplification of the regulations since last year means that all drivers are now allowed a free choice of starting tyre compound at every race and thus such tyre selections, based on intended strategies, will not be apparent until the cars are on the grid just before the start. There was a palpable mix of tension and excitement in the air as today’s start time under the floodlights neared, with everyone very much looking forward to the return to racing action after the winter break and pre-season testing and with so many unknowns due to the new regulations about to be severely tested. The Bahraini national anthem was still played, but the pre-Grand Prix “taking a knee ceremony”, which always very publicly highlighted a mixed response from the drivers, has now been dropped. Formula 1 still rightly embraces its “We Race As One” philosophy though.

The cacophony of noise in those last seconds before the famous red lights go out, with around 20,000 horsepower straining to be unleashed, still brings the hairs up on the back of my neck and, as the first race of the new season got underway with a 350 metre sprint to the first corner braking zone, it was Leclerc who led from Verstappen, Sainz and Hamilton. This order remained until lap 10 when Pérez replaced Hamilton in the leading quartet and two tours later the latter headed down the pit lane to switch his soft compound tyres for hard ones. Soon Verstappen, Sainz, Leclerc and Pérez had also pitted for the first time, with all putting on further softs apart from the Mexican who rejoined the circuit on a medium set. 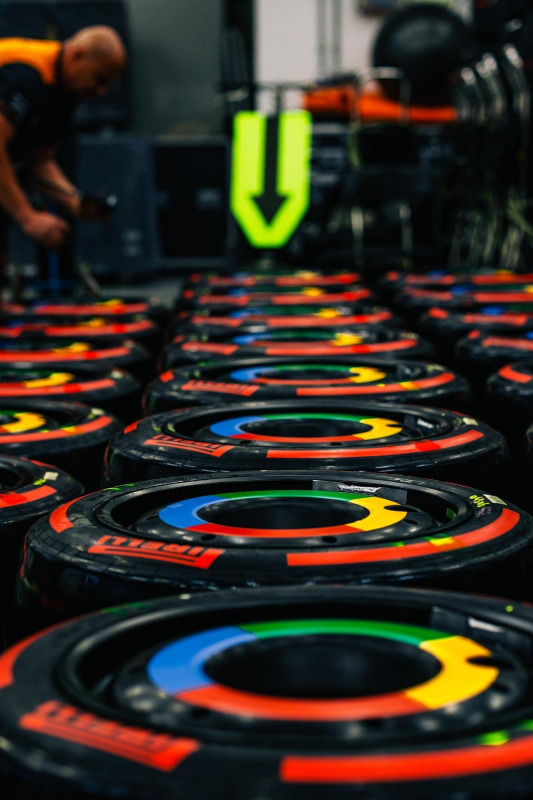 McLaren’s Google Chrome sponsorship made their wheels a colourful sight
This resulted in Verstappen really closing the gap to Leclerc and there followed a brilliant trio of laps as the Red Bull and Ferrari duo repeatedly shared the lead before Leclerc reasserted his authority. Come lap 28 Hamilton made a second stop to get rid of his hard tyres in favour of medium ones and soon after Verstappen, Leclerc and Sainz had also changed to mediums whilst Pérez moved onto softs.

By lap 40 out of 57 Leclerc still led from Verstappen, Sainz and Pérez, with Hamilton, Russell and Magnussen the best of the rest. Four tours later Red Bull opted to try a three stop strategy, bringing Verstappen and Pérez in for softs and Sainz and Hamilton quickly followed suit. However, a curved ball was thrown everyone’s way on lap 46 when Gasly’s AlphaTauri ground to a fiery halt trackside following power failure and a Virtual Safety Car period quickly became a full Safety Car intervention. Mercedes and Ferrari quickly reacted by bringing Russell and Leclerc in for their third stops and, as the Safety Car headed back down the pitlane at the end of lap 50, Leclerc still led from Verstappen, Sainz and Pérez.

However, Red Bull’s team leader was clearly struggling with technical issues and following the restart Sainz soon swept past into second place, with Verstappen forced to retire. Worse was to follow for the Milton Keynes based outfit when third placed Pérez reported a loss of power and at the start of the final lap his engine locked up, tipping him into a slow speed spin at the exit of Turn 1 and retirement too. This gifted the final podium position behind Leclerc and Sainz to Hamilton, with Russell fourth. Whilst Red Bull suffered, Haas and Magnussen celebrated a fifth place finish and there was joy in the Alfa Romeo camp too as Bottas finished sixth and its Chinese rookie Guanyu Zhou tenth. The additional point for the fastest lap of the race went to Leclerc to add a little icing to his well deserved victory. 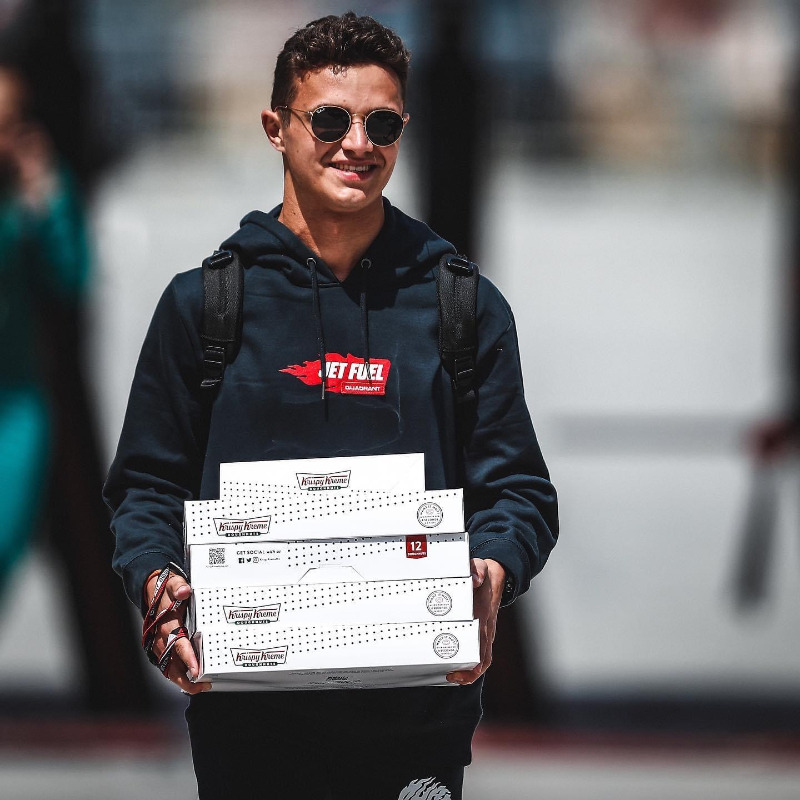 Lando Norris, multitasking as a racing driver and doughnut delivery man!
Soon after the podium ceremony had been concluded attention turned to the need for everyone and everything to be relocated to Saudi Arabia for the second Grand Prix of the new campaign, which takes place in just a week’s time. Will Ferrari consolidate its early lead or will its rivals fight back? We’ll know soon enough.