Leeds Festival Blossoms With An Oasis Of Acts 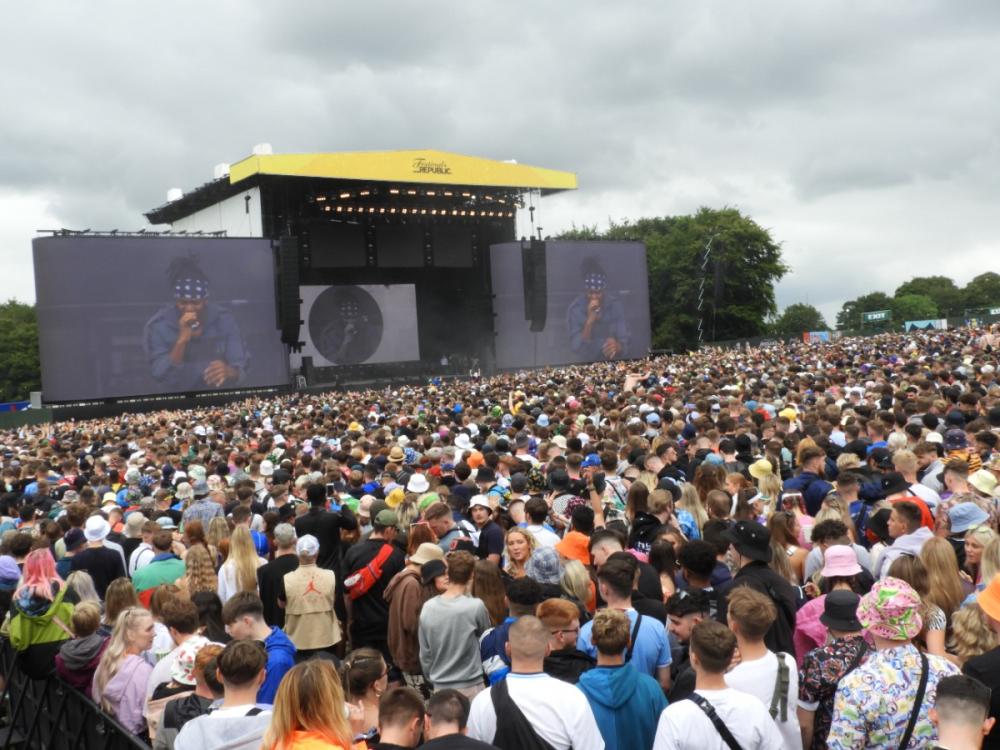 Leeds Festival returned over the Bank Holiday weekend after a one year Covid infused break.

This year for a change there were two main stages, East and West along with the regular tents and smaller stages.

On Friday The Struts had the honour of opening up the East stage: after spending years on tour in America, the UK band should be higher up the bill than they are, not that it lets the band get to them. Dressed in black and pink they look like they should be playing Caesars Palace in Las Vegas, not on a midday slot at Leeds Festival as the drizzle starts to descend. 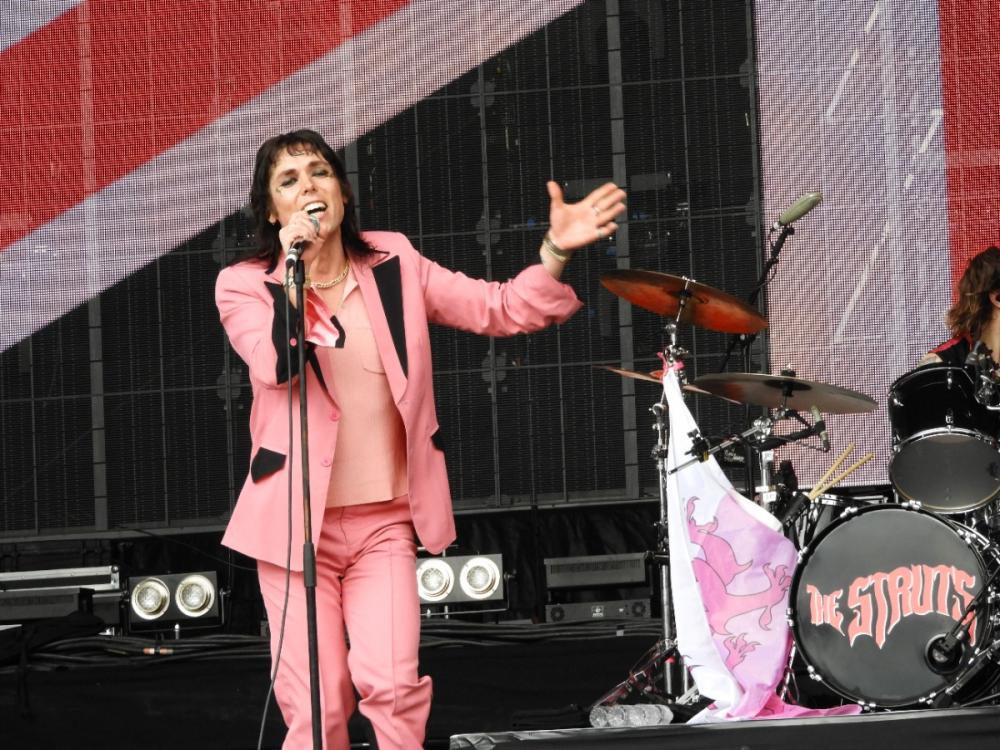 Luke Spiller
Lead singer Luke Spiller has not let any of his charm disappear over the last 18 months as the audience are soon on his side. With songs in the bag such as Prima Donna and Could Have Been Me it is easy to see why. “You have been watching The Struts” he proclaims as the band exit the stage after a thirty minute exhilarating set “and you were brilliant” he continues. Likewise The Struts were as usual, brilliant.

Depending on who you speak to in Bradford, Bad Boy Chiller Crew, are either a joke or the best thing to come out the city. The Leeds audience obviously think the latter as the huge BBC Radio 1 stage is full to capacity. The bassline collective wear the trademark gold chains around their necks strike all the right poses, albeit rapping in a Yorkshire accent! As new single Free reverberates around the room the fans go wild with it being easy to see why the act have sold out a gig at St George’s Hall in their home town in October. 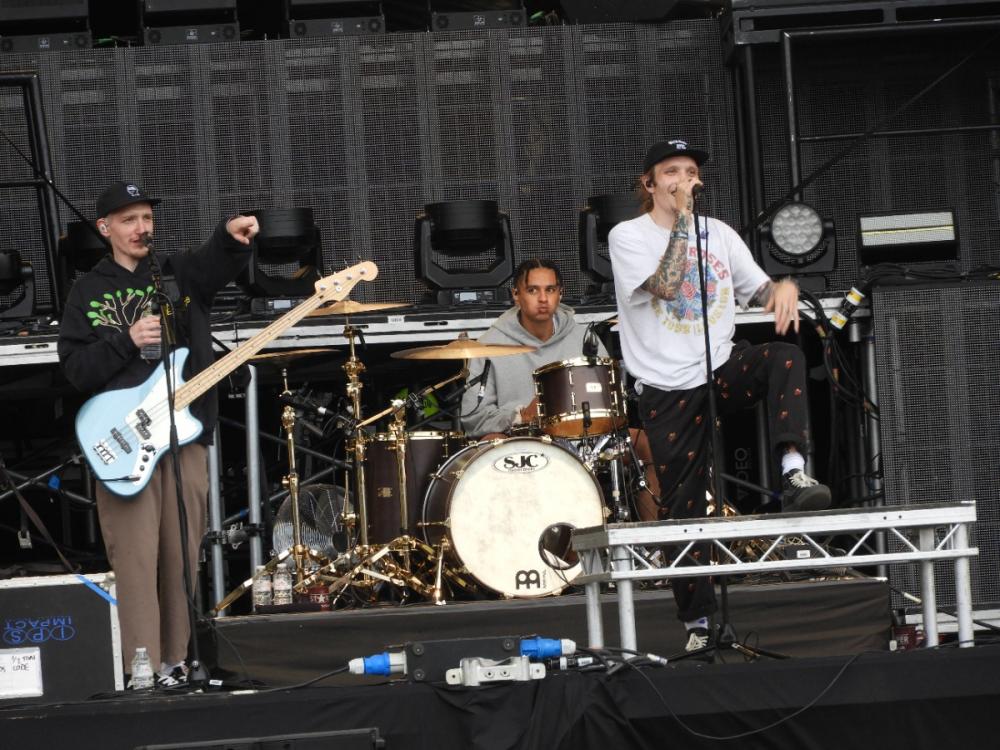 Neck Deep
Pop Punk band Neck Deep delivered a powerful set. The Welsh group take their influences from Green Day and New Found Glory and it shows. Wisely taking the decision to let any newcomers watching the band know who they are, a huge back cloth behind states “ Now then Leeds, we are Neck Deep”. By the time they have performed December and In Bloom they gained many new fans. 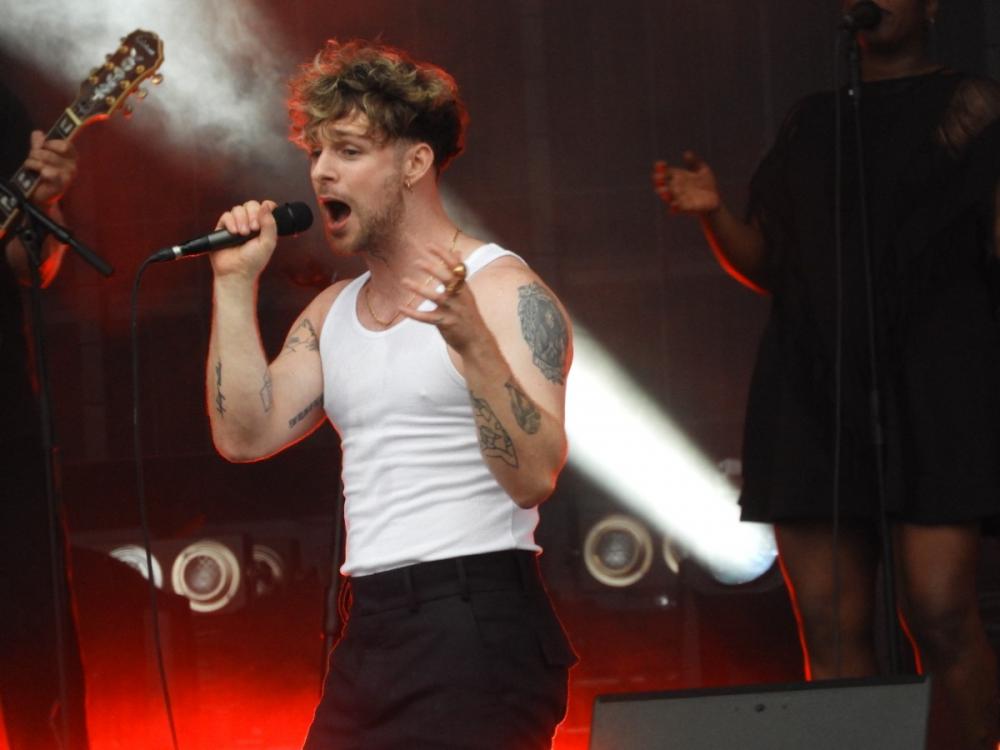 Tom Grennan
Tom Grennan arrives on stage looking like he is on his way to the gym wearing a white vest that shows off his physique. His songs are muscular in fashion too as Something Better, This Is The Place and Little Bit of Love demonstrate that Grennan’s songs will still be remembered in twenty years time. By Your Side started the first mosh pit of the day as the the Calvin Harris track he sang on, is given the seal of approval.


The Blossoms
Stockport act The Blossoms took to the West stage with lead singer Tom Ogden wearing a pink suit. The rest of the band look very serious and visually remind me of American acts such as Kings of Leon with long hair centre parted. Their music though is thankfully one that is more pop based as The Keeper and If You Think This Is Real Life demonstrate.

In June, Wolf Alice released one of the best new albums you might expect to hear this year. As their ten song set list goes too fast, highlights included The Last Man on Earth and Don’t Delete The Kisses. 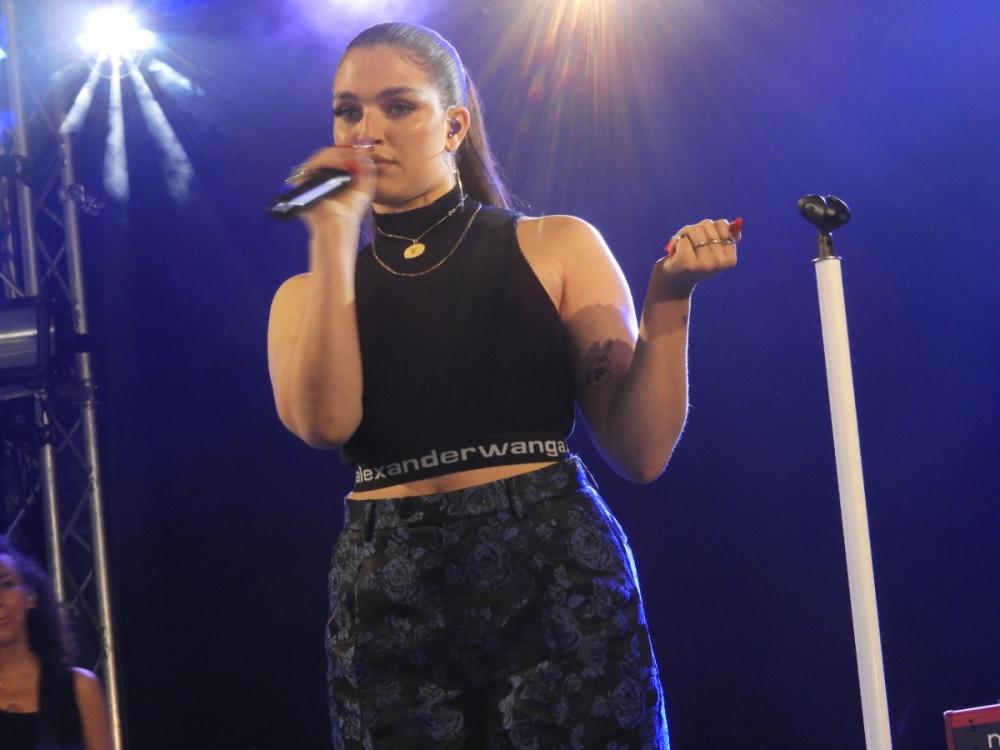 Mae Muller
Mae Muller has a fine collection of jazzy based pop tunes with lyrics that resonate with her mainly female fanbase. Why she is not a bigger star is confounding, though singers such as Anne Marie, who also appeals to the same audience, probably got there first. Singing Happy Birthday on her own birthday weekend Muller also debuted some new songs which showed a more pop based angle. As she concluded with Therapist the young fans almost drowned her out with their own version of the sublime track.

Holly Humberstone followed on the Festival Republic Stage, musically different in style to Muller, the Grantham singer songwriter has only her guitar and keyboards to support her - plus a huge talent. There is a bit of Damien Rice and to a lesser extent, Haim running across her songs such as Please Don’t Leave Yet and Falling Asleep At The Wheel. By this time next year hopefully she will be appearing on the bigger stages. 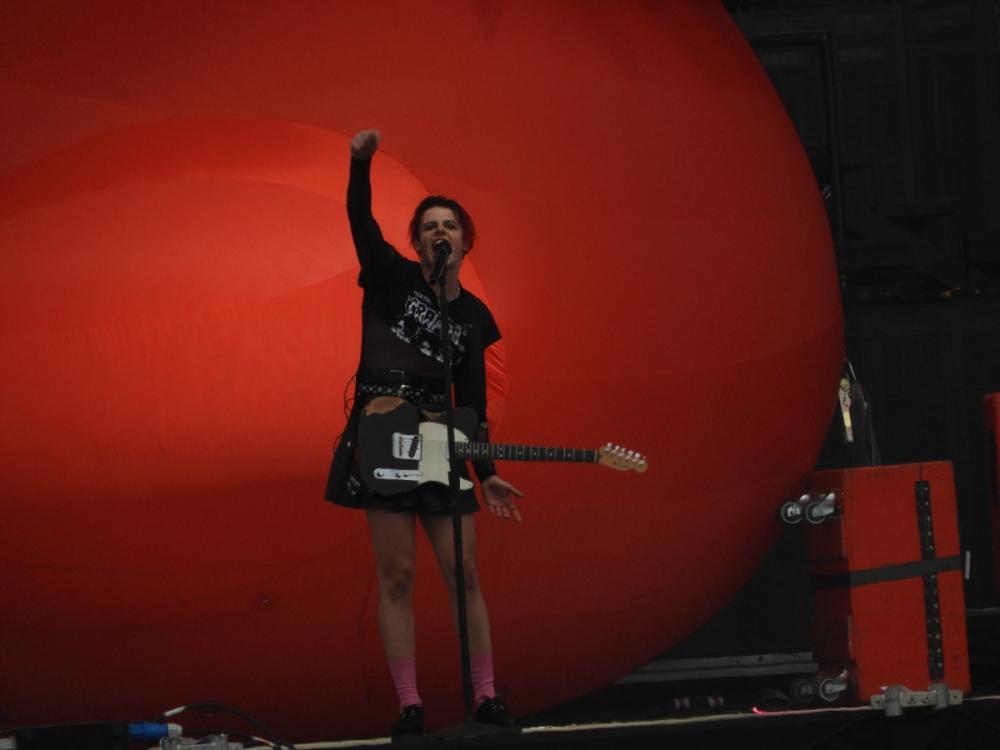 Yungblud
Having never witnessed live Yungblud before, the Doncaster born singer, songwriter and actor was a revelation. With the showmanship of Robbie Williams and the goth inspired image of Marilyn Manson, Yungblud looks set to be playing arena sized venues too. Taking the audience by the scruff of the neck he impressed with songs such as Mars and new single Fleabag which contains the Lyric “nobody loves me” The Leeds Festival audience certainly loved this charismatic star in waiting. 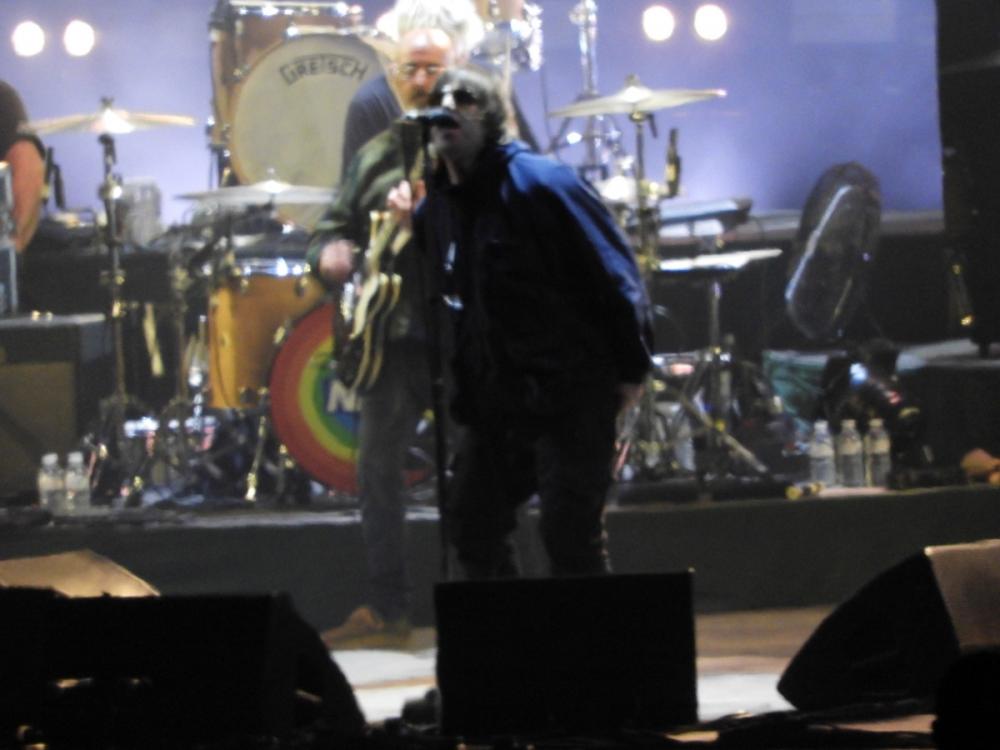 Liam Gallagher
Headline the East stage Liam Gallagher arrives on stage with the swagger and attitude that you have come to expect from the former Oasis singer. His inbetween song banter is as usual kept to a minimum though he does goad the fans with an observation about the score of the last Leeds United v Manchester United game with came with a wry smile from the Manchester City supporter.

His set is peppered with Oasis songs with his latter solo material receiving an airing though the two encores are worthy to become Leeds Festival legendary memories as the four biggest Oasis songs are performed. As he ends with Wonderwall they could probably hear the fans singing over in his Manchester hometown.

“Nice One” as Gallagher is apt to say.
Also by Graham Clark...
Paloma Faith – Keeping The Faith In ManchesterInterviewing The VengaboysLet’s Rock Leeds! - The 80’s Music Festival Charms At Temple NewsamDuran Duran - No Ordinary World In ScarboroughAlbum Review: Metallica - The Black Album Remastered