In an open letter sent to Leeds City Council leaders, Leeds YouthStrike4Climate has called on them to reject the airport’s planning application. The full open letter can be read and signed at this link: https://www.change.org/LeedsYS4C-AnOpenLetter 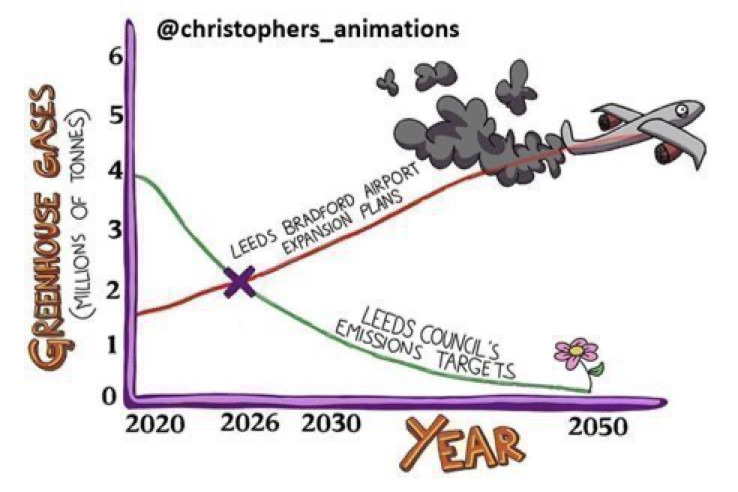 The Youth Strikers remind Leeds councillors that they declared a Climate Emergency in March 2019 and say: "You told us you were ready to act on our calls for change. We believe you meant this, but now is the time to prove it - Leeds City Council must reject Leeds Bradford Airport’s dangerous expansion plans."

The open letter warns that airport expansion would make it impossible for Leeds City Council to keep its promise to make the city carbon neutral by 2030. It also says that more flights would mean more noise. The Climate Strikers explain that there are 36 schools under the flight-path and more noise from increased flights would risk further disrupting pupils’ education following the Covid-19 crisis.

Leeds Climate Striker Annwen Thurlow said: “Our house is already on fire - we cannot let this expansion add more fuel. The Council has a responsibility to protect our health and wellbeing. That means they must ‘Measure what Matters’ and recognise that the health of people and the planet are worth far more than the profit of polluters.”

Annwen sees the airport’s planning application as a test for Leeds councillors. She asked: “Are they determined to meet their bold and inspiring commitments on the climate emergency? Or will they pass the buck on emissions and allow this dangerous expansion to go ahead? Young people in Leeds and across the world are relying on them. So we say to them - please don’t let us down.”


Demonstration organised by Leeds YouthStrike4Climate in 2019. Photo by Neil Terry http://neilterryphotography.co.uk/
Leeds YS4C activist Robbie Strathdee said: “The flight-path cuts right across the city, so expansion would do damage to some of Leeds’ most disadvantaged communities. The climate crisis is intrinsically an issue of racial and social justice, with disadvantaged communities already suffering its impacts most severely in Leeds and beyond. We mustn't heap injustice upon injustice through expansion.”

He added: “We can make Leeds fairer and greener, bringing hope out of heart-break to ‘Build Back Better’ following the Covid-19 crisis. A green recovery for Leeds could look like whatever we want and need as a city - but it cannot look like an expanded airport.”