Love Is In The Air For Two Giant Otters 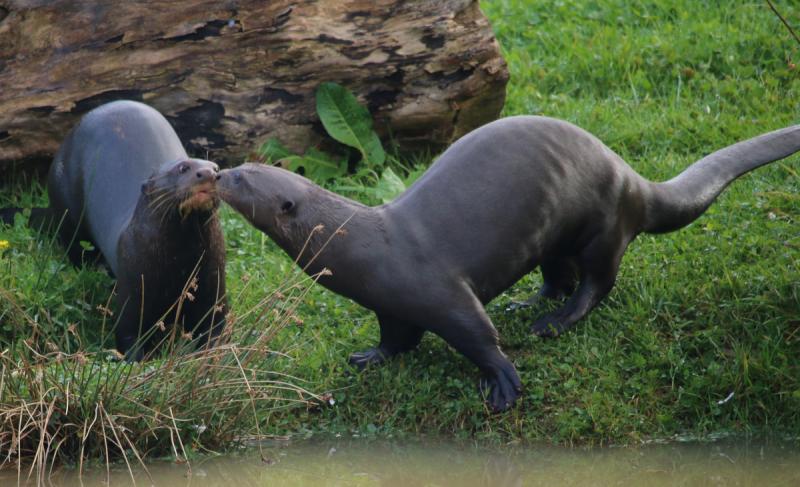 The couple nuzzle up in a tender moment after being introduced at the Yorkshire Wildlife Park.

The pair swam, dived and played together throughout the day after first meeting at the park’s Giant Otter reserve.

“It was love at first sight and they played all afternoon much to the delight of visitors,” said Amy Wright , one of the rangers who looks after the otters at the 110-acre park at Branton, near Doncaster. “It’s early days but they are very happy together and we are crossing our fingers for otter cubs in the future.’

“They are really playful and social animals so it is great to see Alex and Ori enjoying themselves.”

Alexandra, who has a distinctive white flash on her throat, celebrates her seventh birthday on November 19th . She arrived at the park, the UK’s No. 1 walkthrough wildlife adventure, with her sister Mora in 2015. Ori arrived last week as a potential breeding partner.

“When Mora went to Zoo Zlin n the Czech Republic as part of the European breeding programme to protect the endangered species, Alexandra was made her displeasure known very vocally indeed,” added Amy.

“Ori had been living next door to the two sisters since his arrival last week and Alexandra was already very interested in his presence. When Mora left on her own adventure to another zoo, Alex and Ori were getting on so well through the mesh wall that separated them that we decided to put them together earlier than planned.There was no stopping them then! Ori set off across the reserve with Alex and they hit it off straight away. They have been playing in the lake and diving in and out of their indoor pool to the delight of the visitors. We couldn’t have hoped for a better start. ”

Giant Otters are native to South America. The Yorkshire Wildlife Park Foundation, which is based at the park, is supporting projects in Brazil to save the species, whose numbers have plunged to less than 5,000 in the wild from habitat loss, increased farming and fishing.

It funds a key project in the 90,000 hectare Cantão State Park, in Brazil, which is home to 700 species of birds and 300 species of fish. The scheme is creating local jobs, improving ecosystem management, conservation awareness and establishing new river channels and oxbow lakes as sanctuaries for Giant Otters. The reserve supported by the Foundation was recently threatened by forest fires that were raging through the Amazon.

Meanwhile, back home visitors can see Alex and Ori and some of the world's most beautiful and rare animals including tigers, leopards and the country’s only Polar bears throughout half term.