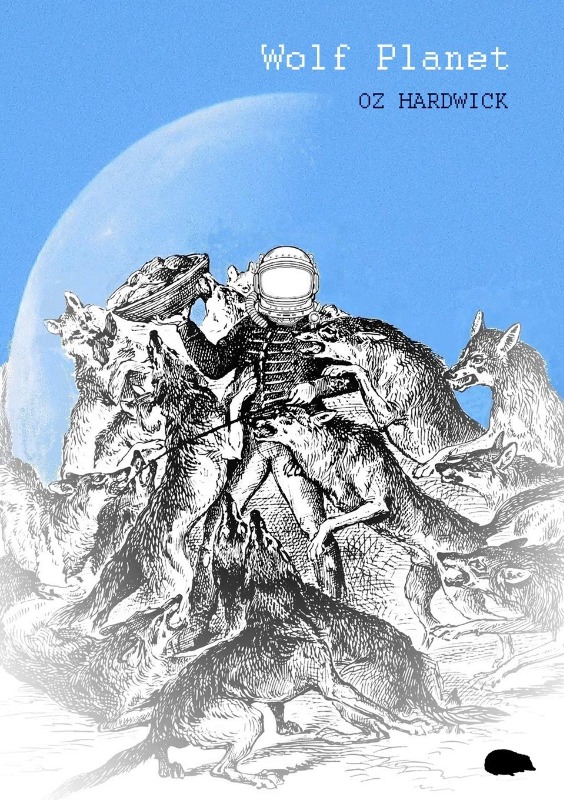 The flotsam of Oz Hardwick’s febrile imagination might lead the accustomed reader to infer a unifying impulse in his work, though that would necessarily circumscribe a writer whose instinct is for contrariety and division.

Cross-sectional similarities obtain in despite: with his new venture Wolf Planet, he returns to the fluidity of the prose poem form if only because neither prose nor poetry could contain, in isolation, the energy and phenomenally wide-ranging gusto of the piece. Well worn conceits flourish here – a clotted journey, rich with the colour and texture of observation and reflection, neither of which is intended to render an approximal reality, but rather blossoms on the margins of both experience and imagining.

And a narcotic odyssey it is. Threads of meaning, and sometimes of a vibrant impressionism to which meaning is half irrelevant, are woven into a tapestry whose wider resonance is revealed as images unfold.

The central figure is a lycanthropic totem, a figure at once animal and human, seductive and threatening, seductive because threatening, towards which all of Hardwick’s profoundly lyrical ‘compulsions are blent’. He is killer and he is prey, prey to human complacency and myopia, by turns a representative of a fundamentally unknowable natural world, and the ‘Big Bad Wolf’ of childhood fairytale memory.

But most he is human by any other definition, with the self-destructive rapacity and greed that is characteristic of a species oblivious to its own dangerous habits. If the real wolf is a symbolic guardian of a traumatised planet, whose luminous eyes in dark forests are a reminder of oncoming ecological catastrophe, then his alter ego is present at the feast.

Hardwick’s sense of the world is never constrained by time; the apparent velocity of temporal events is held within the compass of impact and effect. And few can trace teeming, crumbling arcs better than this writer:

‘Future and past are indistinguishable here, but churches bloom and
fade as supermarkets rise and fall. It’s a matter of tides and needs, of
lies and deeds, of sky and seed: all things flower in the correct angle
of light.’

This is fine, perspicacious writing, as alert to possibility as the lupine overseer’s instinct. You are obliged to admire Hardwick’s compendious knowledge and self-awareness, which are manifest, here and very much elsewhere in his oeuvre, in the thick carpet of objects littering his narrative like a plastic-clogged Pacific.

This both is and is not the point: objects of observation and memory with immanent significance might, by alternative inference, be a collective metaphor for the detritic islands floating in our negligent wake, or they might bear the cargo of memory in hyper-sensory backward glimpses and lucid visions of a parallel present.

The real beauty of Oz Hardwick’s writing – aside from the sheer pleasure the reader takes from relishing the sinew of his delivery – is the folding of one suggestion into several others; the peripatetic narrator is immersed in a journey where arrival is subordinate to the time-slipped inventory of astonishments revealed en passant:

‘Streets here are a question of ownership, a question of right or wrong,
a question mark, hanging like a hot air balloon over a swollen river. I
don my protective cynicism and step alone into all our stories, sifting
soft accretions of coffee, shared cigarettes, and smuggled wine;
stopping at phone boxes to call the only numbers I remember’. 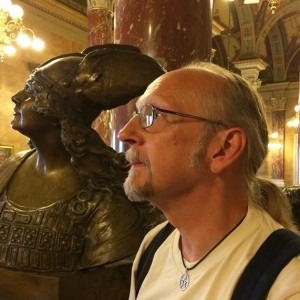 Oz Hardwick by Sue Whitehouse
The dreaming of images into plain sight is convincingly realised: the apprehension of remembered locators in terms of abstractions – here, tenure and ownership - is characteristic of the architecture of subconscious negotiation. And it is common to Hardwick’s work, providing a thread of narrative continuity in a fictional, factional world of misunderstanding, unreliable memory and tentative suggestion.

But the quest is the mediating impulse, and you have to suspect the autobiographical hand of the writer driving the narrator’s relentless impressionism. The journey reaches for the cosmos as much as through the hinterlands of faltering recall and a dessicated present, for the future is also picked out in tropes which mock the teleological certainties of Tomorrow’s World.

And as we are about to embark on an unlikely new era of space exploration, amidst the carnage of Covid and wrecked economies, there is a sense in which Wolf Planet is a panoramic palimpsest of the howling inconsistency that defines our relationship with reason. Astride the muck-heap of signifiers – the pearls, and the junk, of endeavour – Hardwick navigates a route towards definition, and if Godot never arrives, there remains hope, bound in the stream of continuing discourse.

Overlain with a sense of ‘prior’ knowledge, of ‘knowing’, Wolf Planet is an open-hearted and wise enquiry in which there is no absolute distinction between personal memory, inveigling its way into the unfolding narrative naturally, and reflections on a world in extraordinary times.

If I compare Oz Hardwick at his protean best to Woolf, it is a slight observation rather than a futile attempt at asserting parity. But at certain moments, he is heartbreakingly on point:

‘It’s a story of June in the South, all dust and pollen, with straw houses
leaning against the weight of the sun. It’s dry dry dry, and every day
cracks a little more, with fissures in the tarmac opening into
archaeological surprises. Amongst the bones and bottle caps, strap-
ends and lead badges speak of faith, feast and famine, fear and
fucking; the same old same old that ripples the surface until it almost,
nearly, not quite tears.’

Wolf Planet – A Space Age Folktale is published by The Hedgehog Poetry Press.