One of the most important people in the UK touring production of Singin’ In The Rain doesn’t even have a photo in the programme: Andrew Wright, choreographer and purveyor of electrifying dance routines, panache, and principal contributor to one of the best shows so far this year.

This was a superb production that had me smiling in the darkness like a Cheshire cat: foot tapping numbers, tap dancing men – a rare sight worthy of mention – four amazing principals and, well, an evening of pure joy if a little damp for those in the stalls!Sam Lips gave an effortless performance as romantic male lead Don Lockwood (that was the Gene Kelly part!), even if he does sound like someone straight off the Goodfellas movie set, but, without Ross McLaren as Cosmo ‘Make ‘em Laugh’ Brown (Donald O’Connor immortalised the role), the show simply wouldn’t have happened. 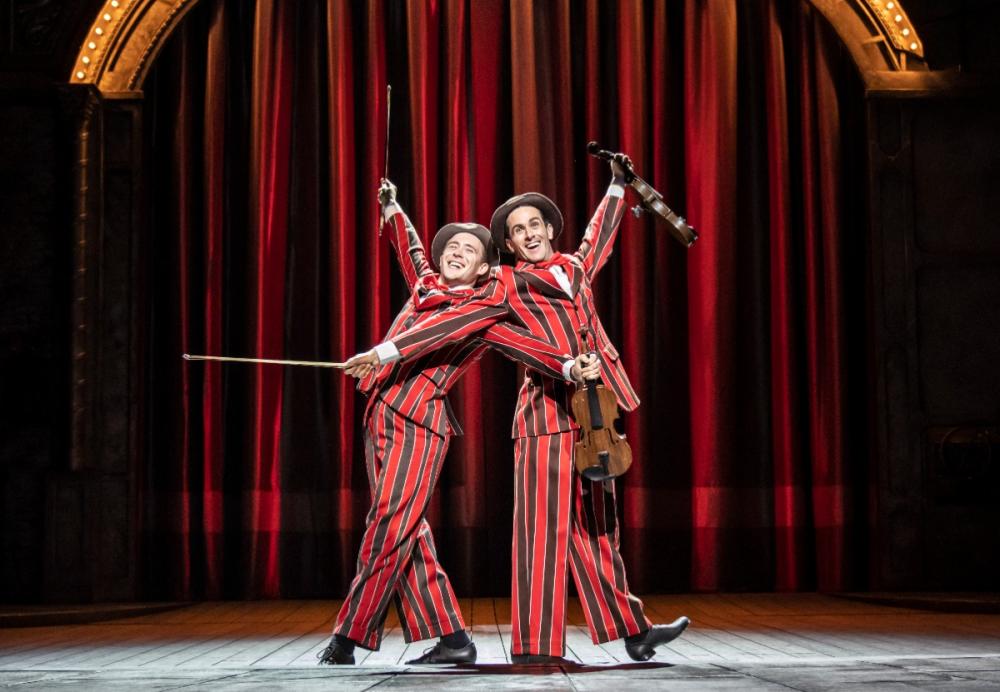 (L) Ross McLaren as Cosmo Brown and (R) Sam Lips as Don Lockwood (C) Johan Persson
They complemented each other brilliantly – physically and artistically – and there was a genuine sense of on-stage chemistry: you felt that these two actually liked each other, each with personalities that crossed the footlights with complete ease.

Lips mischievously made sure that his fans in the stalls went home with the prospect of a drying machine running into the small hours, whilst McLaren brought to life 1920’s ‘humour’ with style and timing, proving that you don’t have to be anything other than talented to make a smut-free libretto talk.

This was a musical inspired by more innocent times when entertainment was the raison d’etre: modern shows have a tendency to deliver musical reality when, more often than not, you want escapism: Singin’ In The Rain is just that but, as a bonus, comes wrapped in an exquisite box that says ‘quality’ on the top.

It is a musical that has the hallmarks of Gershwin's Crazy For You, Busby Berkeley and Mack & Mabel, all rolled into one: an insight into the movie mogul nightmare that was the transition from silent movies to the talkies.

Jenny Gayner as Lina Lamont was the star with the squeaky voice – one half of the public face that was Lockwood and Lamont – but Charlotte Gooch as Kathy Selden...
Sam Lips, Charlotte Gooch, Ross Mclaren
...was the one that Lockwood truly falls for and the ‘voice’ that dubs for Lamont once talkies win the public over.

These two ladies were fabulously talented and nailed their parts.

But what are four talented principals without an excellent cast? Nothing. However, this troupe of performers was seamlessly strong from corner to corner with no weak links: colourful, musical, technically adept and with a sound plot that shone through the rain despite all the technical challenges, Singin' In The Rain will lift your spirits.Many years ago, the story goes that the ‘rain’ tray in an earlier production of this musical leaked into the orchestra pit and gave the bass player a bolt when water and electricity met: fortunately he survived!

The nearest you will get to a shock this time, is the price of ice creams but, if you are a lover of musicals, this show will knock you dead!