Major Testing Drive Ahead Of Return To Schools Next Week

As half term comes to an end, the Education Secretary is urging students and their families to take a test before returning to the classroom 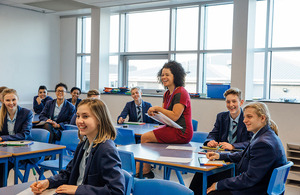 Education Secretary Gavin Williamson is urging all secondary school and college students and their families to take a coronavirus test before returning to the classroom next week (7 June) following the half term break.

A major testing programme has been in place for students since schools and colleges returned in March to identify asymptomatic cases and isolate them as quickly as possible, helping to keep classrooms open.

Figures published earlier this week show more than 50 million rapid coronavirus tests have now been conducted by students and staff at schools and colleges across England since 04 January.

Building regular twice-weekly testing into routines has been critical in reaching this milestone number of tests, and is testament to the dedication of students and staff to keep the virus out of schools and colleges.

Rapid testing continues to help find the one in three people with Covid-19 who show no symptoms, allowing them to isolate rather than unknowingly spread the virus, preventing outbreaks from taking hold.

"A year ago it was unimaginable to suggest that a testing programme of this scale and impact could be delivered at the speed we have seen, and I am hugely grateful to the families, students and all those working in education for their role in making it happen.

"Asymptomatic testing helps break chains of transmission by taking people who are infectious but don’t know it out of circulation.

"As the half term comes to an end, take a covid test before going back to the classroom."

"Rapid testing has underpinned the entire reopening of schools and it’s been a remarkable success that is testament to the herculean efforts of teachers, children and parents playing their part by making a test part of their everyday lives.

"Around one in three people who have COVID-19 experience no symptoms and could go under the radar without regular testing. By getting tested multiple times a weeks, children have shown us that it is possible to keep the things we all love open by quickly identifying outbreaks and taking decisive action.

"As parents gear up to return their children to the classroom tomorrow, I’d urge them all to carry on doing their bit by keeping calm and carrying on testing during the term ahead."


"As the half term comes to an end, take a covid test before going back to the classroom."
Covid-related pupil absence has remained consistently low since the start of the summer term, with only approximately 1% of pupils absent from state-funded schools for covid-related reasons each day since 21 April.

Surge testing is also available in areas of high prevalence of the virus or variants of concern, including on-site testing in selected schools and colleges to provide an additional boost to efforts to keep the virus under control across the country.

Secondary schools and colleges continue to provide packs of tests to their students so they can take two tests a week. Primary schools are also providing packs to their staff.

Everyone is encouraged to test twice a week, with one of the two tests at the weekend to catch cases before starting the new school week. Testing before returning to school after the half-term break will be particularly important after mixing with different groups over the break.


Anyone not working from home is encouraged to follow a similar routine.

With national rates of the virus now much lower than they were, positive cases identified by rapid testing are confirmed with a PCR test, meaning nobody has to worry about isolating unnecessarily following a positive rapid test result.