Manchester Artist Who Painted The Wharfe 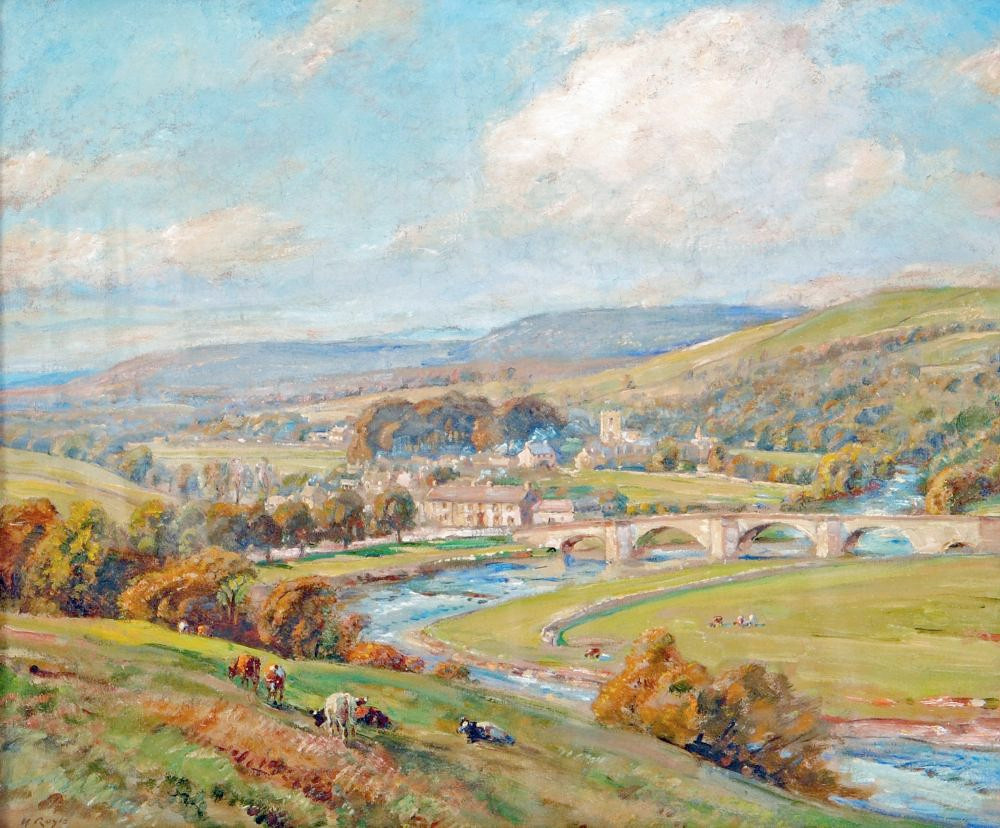 Herbert Royle (1870-1958) as a painter first became known to me in my boyhood. I was in the Manchester Art Gallery with my maternal grandfather, and if he dwelt on a particular sylvan scene for longer than others, it was perhaps because his own brother was called Herbert and the family name was Royle.

So this fine artist has always been one of those I look out for and have occasionally had the good fortune to come across in Manchester and Liverpool. Bradford’s Cartwright Hall have a couple of nice ones, Manor Farm, Nesfield - of the artist’s own home - and Haytime, near Nesfield.

He was born, the son of a newsagent, in Patricroft, near Manchester. Having from an early age shown an aptitude for art, he trained at the Harris Institute, Preston, the Southport School of Art and also took lessons from the much admired John Buxton Knight, at his studio in Drayton, Middlesex, and was clearly strongly influenced by Knight’s style of landscape art.

Though now largely forgotten, Royle was hugely respected in his day in artistic circles and his loving portrayals of English summer harvesting, the Wharfe in all her glory and, not least, his speciality, snow-covered fields, made him very popular with the common man. His work was highly sought after and much reproduced in the first half of the last century, arguably the last romantic age.

A member of the Manchester Academy of Fine Arts, he exhibited there annually from 1894 for almost fifty years. From 1900, he held regular exhibitions at the Royal Scottish Academy, the Glasgow Institute, the Royal Society of Painters in Oils and, extensively, at Liverpool Academy.

In adulthood, he lived firstly in Southport before, in 1918, moving across the Pennines to rent a property in the shadow of Bolton Abbey. He spent the rest of his life from 1924 onwards at the Manor House, in the hamlet of Nesfield, near Ilkley. Here he made a studio out of an old army hut on the hillside above his home. Although grand of name Manor House had no electricity and water was obtained at the village pump.

It was here that he produced the Wharfedale landscapes, particularly of scenes around Ilkley, for which he is now most remembered. It is, indeed, for his Yorkshire scenes that he is most well known so much so that he is sometimes thought of as a Yorkshire artist, a member of a Wharfedale group which included Kershaw Schofield. (Bradford-born Schofield, a fine landscape artist, was famous for throwing ‘a painting’, chucking oils on a canvas and sculpting them with a palette knife.)


Also by Andrew Liddle...
Chantry Beers - The Pride And The PassionTheatre In The RowntreeAugust's Beer Of The Month - Rooster’s Craft Beer PerfectionMixed Reaction To Brewing Tax ReformsSwing That Music At Lawrence Batley
An article in The Dalesman, which I have kept for the last 44 years, describes the common sight of him trundling through the Dales on a bicycle seeking subjects to paint en plein air, his easel strapped to his back. Apparently in the depths of winter he would carry a hot potato for his lunch but more importantly to warm his hands. Each year he holidayed in the Scottish Highlands and painted the lochs and harbour views that were exhibited north of the border. In the villages of Beinn Alligin and Diaberg, in Wester Ross, even today may be found paintings that he gave the crofters in payment for lodgings.

As a painter of landscapes mainly in oils, his very English Impressionistic style is characterised by strong brush strokes, heavy impasto, bold vibrant colours and an eye for, shall we say, romantically hazy detail. One of my favourites is Burnsall, Autumn 1949 (above), a beautifully quiet painting, unusually in the softest shades. It seems, quite magnificently in a quiet understated way, to breathe the very quintessence of a time and place. It captures more than the landscape, stretching across to Thorpe Fell and Langerton Hill, but the delicate early Autumn air, the tones and half lights of that particularly evocative time of the year, its end and late glory. Here we have the bend in a Wharfe that is swollen and quick moving judging from the white in the blue water as it rushes through the ancient five-arched packhorse bridge restored in the 19th century. The parish church and chapel can be clearly discerned. It’s utterly beautiful.

I need to do some travelling.