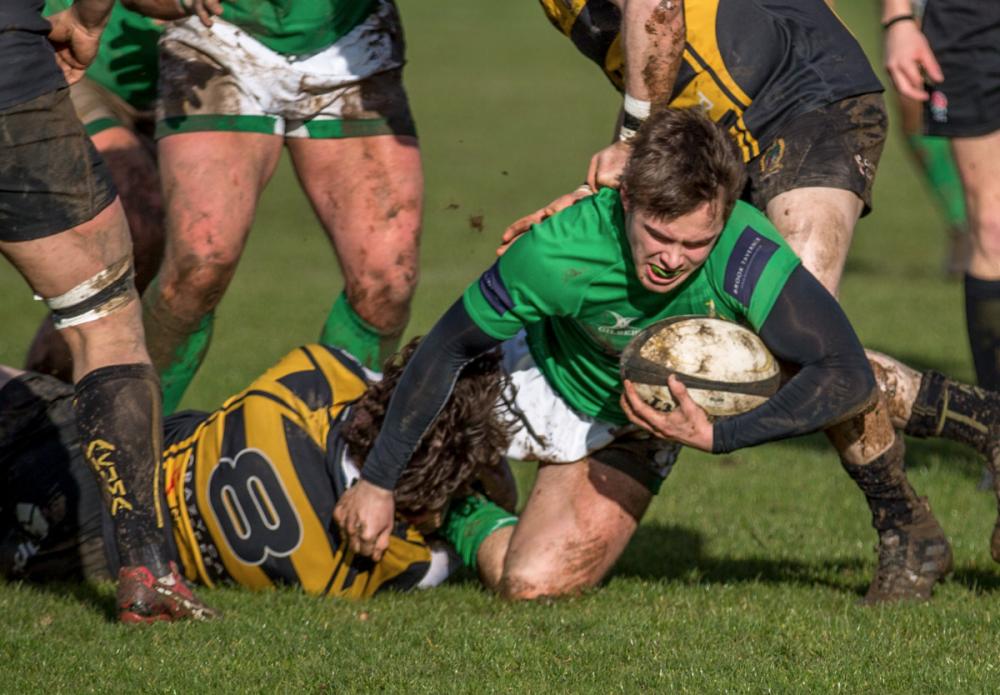 photo by Ro Burridge
Wharfedale’s fine run of results came to an end in a quite bizarre match at Hinckley. Although the Greens dominated territory and possession, and Hinckley gave away countless penalties and three yellow cards, it was the home team that came away with the spoils. The reality was that at key moments, Hinckley’s superior weight and power was always likely to hold sway on a heavy pitch that was only just deemed playable.

Facing into a strong wind, Dale came out of the blocks well, showing no sign of rustiness after their enforced three-week break. But despite probing in Hinckley’s 22, the Greens could not break through. When they won a relieving penalty on half way Hinckley kicked for touch. From their first attacking line-out Hinckley opened the scoring in the fifth minute, with a try from Olly Povoas under the posts. An almost identical play, mid-way through the first half, this time seeing hooker Johnson go over, allowed Hinckley to stretch their lead to 14-0. 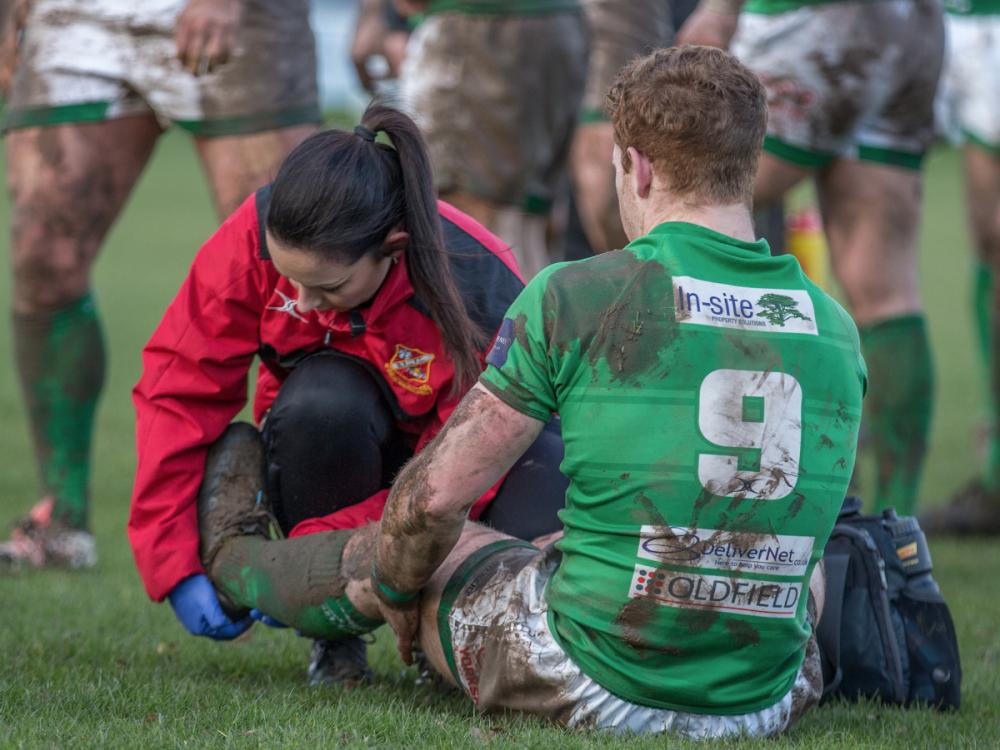 photo by Ro Burridge
Within a couple of minutes of this second try, Wharfedale’s situation looked dire, as first hooker Stockdale and then Blakeney-Edwards left the field with injuries. But, regardless of having several changes of position, Wharfedale played with real fluency for the remainder of the half. Joe Altham, made a fine burst into the home 22, and there Wharfedale stayed. Hinckley gave away a string of penalties, and received two yellow cards, but Dale gambled on crossing the whitewash rather than kicking for goal.

Although the wind frustratingly started to die, Wharfedale continued their unrelenting attack after the break. Again, Hinckley were happy to give away a succession of penalties, and a further sin-binning, to keep the Greens out. Eventually, after the Greens had numerous times come up just short, George Hedgley crossed the line. Blakeney-Edwards’, who had returned to the fray, brought Dale to within 7 points, and with five minutes left, it seemed as if Wharfedale’s fitness may have the last say and secure a draw. But, in a cruel repeat of a previous visit to this ground, Hinckley denied Wharfedale even a losing bonus point, when they landed a long penalty with the final act of the game. 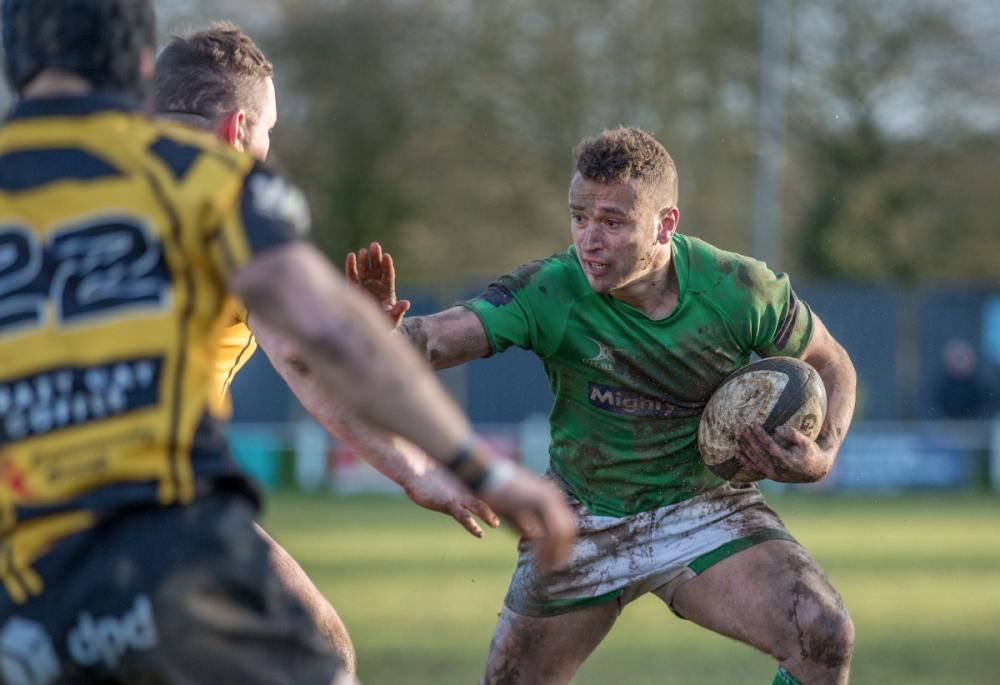 photo by Ro Burridge
Despite the frustration of coming away empty-handed, head-coach Jon Feeley saw plenty of positives in Wharfedale’s display. ‘Our ability to retain the ball was outstanding, denying Hinckley’s power runners the opportunity to attack. The heavy conditions couldn’t have been worse for us, but we stuck at it. Ultimately we made a few mistakes at crucial moments, and they undid us. But although the boys were hurting afterwards, they shouldn’t be. Hinckley are a top side, and we played well.’ 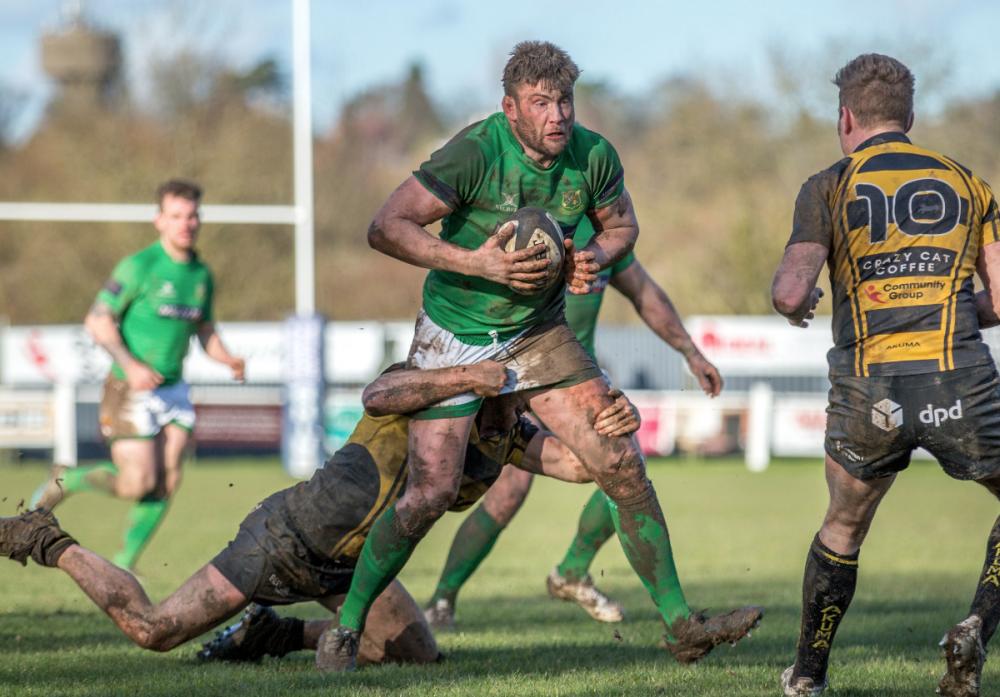 photo by Ro Burridge
This was not a match to pick out individual players. Wharfedale, as a team, played to a game-plan, and on another day would have added to their win record.