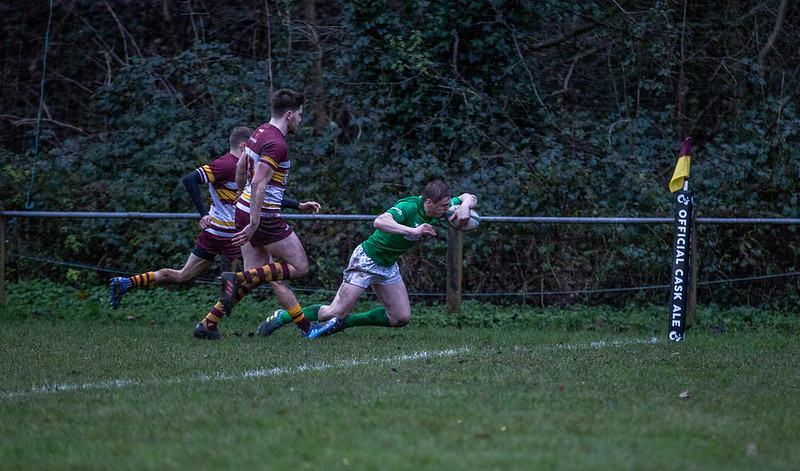 Bradley Viner scoring the first of his two tries - photo Ro Burridge
Wharfedale ran on to the pitch at Lockwood Park to a rousing cheer from the travelling faithful. It was good to see so many supporters making the trip down to Huddersfield. The Green Machine responded by playing with plenty of commitment. They showed this in the first few minutes when Huddersfield put in a clever 50-22 kick to win a line-out just in Dale’s 22. It was as close as they got, even though they went through 24 phases they made no progress, their only reward was a penalty kick by Will Milner to lead 3-0.

A scrappy few minutes followed with Dale gradually getting the upper hand. The scrum was dominant and they won a penalty on Huddersfield’s put in. A few phases later another penalty was followed by a Dale catch and drive which gained another 20 metres and another penalty. Dale varied the play from the attacking line by spreading the ball out to the left. Oscar Canny held the ball just long enough for his pass to outwit the defence and allow Bradley Viner to squeeze in at the corner for an unconverted try.

Dale’s second try came from a clever switch of play by Sam Gaudie with Rian Hamilton in support. The flying winger still had work to do and a combination of speed and footwork took him to the line. Again, the difficult conversion was missed but Dale now led by 7 points.

A 30-metre penalty was slotted by Milner to reduce the lead and he added a third before half-time to reduce the visitor’s lead to a point.


The fact that our tries came from the wingers was a reflection of the strong platform created upfront, it allowed us time to play.
Milner converted his fourth penalty after half time to take Huddersfield into the lead 12-10. Dale did not panic and soon were applying pressure on the Field defence. After a Huddersfield 22 drop out Dale attacked and a grubber put through which was just gathered by the defence. The clearance kick was charged down by Viner who smartly followed through and touched down for his second try. Will Davidson took over the kicking duties and was successful from wide to the left.

With 6 minutes to go Davidson then stepped up to land a penalty from 43 metres to give Dale some breathing space. The home side now needed 2 scores to snatch a victory. The last kick of the game was a long-range penalty from Milner but his attempt to secure a losing bonus point missed. 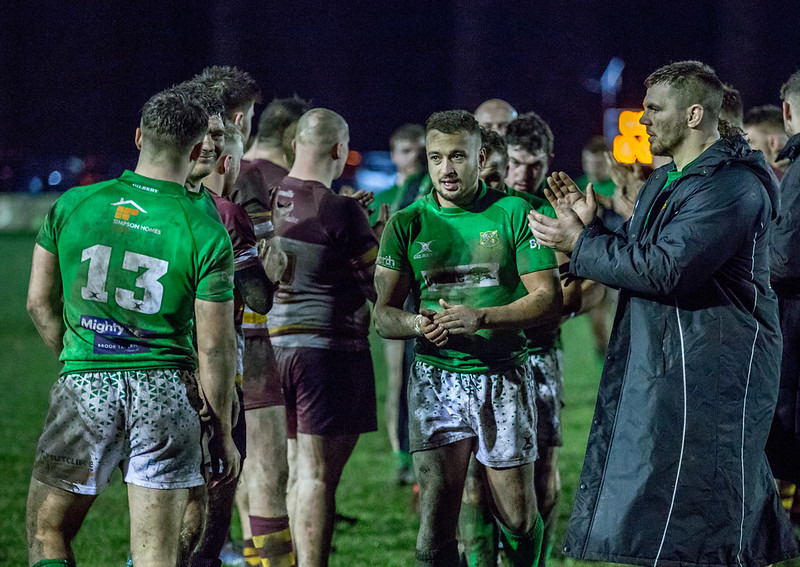 photo Ro Burridge
Dale thoroughly deserved the win but again they did not turn the dominance, especially in the first half, into points. The faithful were obviously pleased with the four points but wanted more. The decision to kick the penalty with 6 minutes to go was, in your scribe’s humble opinion, correct as it secured the win. Some thought that a kick to the corner and an attempt at a bonus point fourth try should have been tried. There were again mistakes made in attack when Dale were threatening the try line and some of the faithful were bemoaning the number of penalties being given away.

The stats don’t always agree with the crowd’s perception as the penalty count was close with Dale conceding 14 to Huddersfield’s 11. Dale did spill the ball six times in the first half but were much better in the second half. The set piece was dominated by the Green Machine, especially at the line out. Dale only lost 2 out of 10 and these were to the whistle as they were judged as not straight! Some great leaping by Carlson and Burridge saw Huddersfield lose their last 4 line-outs to leave them with a measly 50% success rate.

There was more cohesion than last week and the effort and commitment from all players was 100%. Bradley Viner stepped up well to the 1st team and it was good to see Sam Gaudie and Josh Burridge back on the field. Ryan Carlson was again impressive as were the rest of the forwards. Rian Hamilton showed the form that took him to representative rugby at the Dubai 7’s and Oscar Canny showed maturity in midfield. Will Davidson and Jonathan Moore were both secure in their roles with Davidson showing that he can also land important goal kicks.

Head Coach, Jon Feeley, commented:
“We worked really hard in the week on field specific thinking and reading the requirements of the game. The boys made sound decisions at key times to relieve pressure and then capitalise on the few opportunities that arose. In such difficult conditions we needed clarity and our leaders gave that. The back row and Sam combined really well to direct our forwards and stockers again led be example. The fact that our tries came from the wingers was a reflection of the strong platform created upfront, it allowed us time to play. Really pleased for Brad, determination bought him the second try and Rian again showed his quality with a superb finish. Special mention for Will Davidson-to nail that kick from that distance to take us out of reach showed some character”.