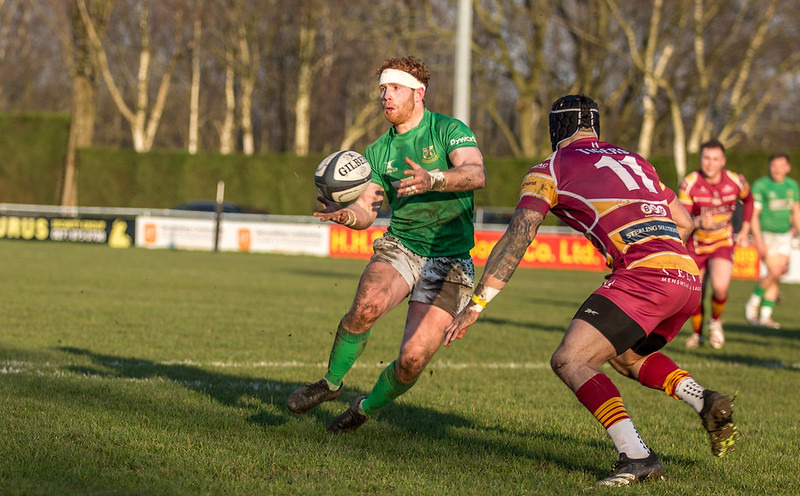 photo by Ro Burridge
The Travelling Faithful were rewarded with a great game of rugby in which Wharfedale played a massive part. After the home match against Sheffield Tigers there was a few of the faithful that thought long and hard about making the journey to Manchester. This is the strength of the Faithful, they looked forward and a host of Wharfedale supporters battled through Colne and made it down the M66 to Whitefield.

There was more rugby played in the first 10 minutes than was witnessed in 80 minutes the week before. Tigers took the kick off and spread the ball left and ran the ball from phase one. Dale got the idea and after a lineout on half way they attacked. A retreating home side gave away penalties and field position and Dale had an attacking lineout 7 metres out. The ball was secured and after 2 good phases Eliot Stockton burst through to touch down. Tom Davidson added the conversion.


“Injustice is the most bitter pill to swallow, but that emotion is quickly replaced by pride.
Dale lost possession twice in the next period of play; once when the ball was stripped and then when a penalty was awarded to Tigers after a bit of handbags. Sedgley took full advantage with two tries. The first was an excellent move that the older members of the crowd thought had gone out of fashion. A simple loop movement by stand-off, Stephen Collins, and good, fast handling created an overlap for Jamie Harrison to score in the left-hand corner. No conversion but good back play soon created the second score for scrum-half, Daniel Openshaw. Collins added the conversion to give the home side a 12-7 lead.

Back came Dale and the Green Machine turned up the heat in the scrum. They had got a nudge on in the first two Park scrums but after 20 minutes they had the put in and drove Sedgley back and won the penalty. This was in Dale’s 22; they then worked their way into the home 22 and Tigers were struggling to contain them. From a 5-metre scrum Wharfedale held the Tigers in the pack but Sam Gaudie spun the ball to Tom Davidson who darted through to score. His conversion nudged Dale into the lead 12-14 at halftime. 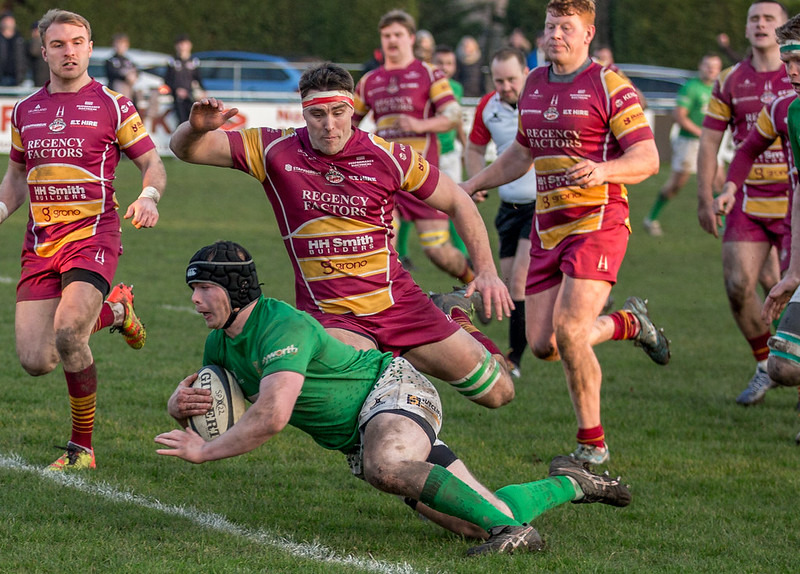 photo by Ro Burridge
Park opened the scoring in the second half with a try from hooker, Matthew Gallagher. Collins added the extras. Back came Wharfedale and a penalty award saw Tom Davidson send the ball deep into Park’s 22. A successful lineout was followed by 3 good phases and a platform to attack. Jack Blakeney-Edwards opened up the defence and off-loaded to Sam Gaudie. Gaudie gave the scoring pass to prop, Sam Dickinson who scored his first try for Wharfedale. Davidson conversion bounced back off the post leaving the scores level.

A Davidson penalty took Dale back out in front before the first of two yellow cards gave the home side the advantage. The first yellow card (Harry Bullough) was probably deserved as a high tackle in the corner was a contributory factor which stopped a try – there was a second tackler on hand or the ref could have awarded a penalty try. Dale defended well during this period and only conceded three points from Collins’ boot.

Back to 15 men Dale again went ahead through the boot of Tom Davidson. The second yellow card was extremely questionable a kick and chase looked very successful and a great tackle from Oli Cicognini seemed to have Park on the defensive in their own 22. The officials took a different view and a penalty was awarded against Cicognini for a deliberate knock on. The decision of the assistant referee was taken and even though this was deep in Park’s half Cico was issued a Yellow Card. Sedgley seized their chance and created enough space for Gallagher to grab his second try wide out to the right where Cicognini would have been defending. The successful conversion finished the game. 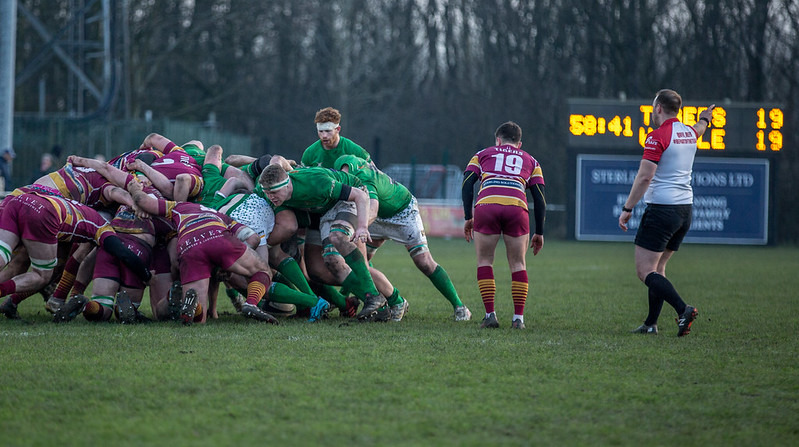 photo by Ro Burridge
Heartbreak for Dale but no need to be downhearted as this was a performance that was worthy of the ennobled generations that have worn the green shirt. Many will be at the Avenue next weekend for the match against Bournville as a group of past players are hosting the match.

Head Coach, Jon Feeley, commented after the game:
“Injustice is the most bitter pill to swallow, but that emotion is quickly replaced by pride. I was proud to be associated with a team who performed with terrific endeavour, outstanding attitude and skill. Our intensity in both attack and defence was constantly high and we played more with our instincts. The aim is to now back up this game with a challenging training week and not just replicate this week’s performance, but to learn from what we did well and improve again”.