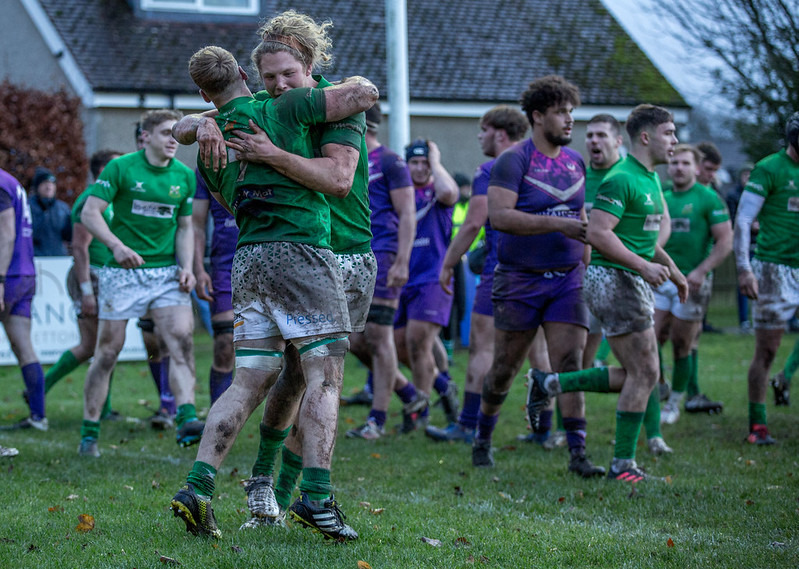 Ryan Carlson celebrates his first try for the Green Machine
Loughborough went in for oranges leading the game by 14 points to 3. They were gifted two tries by horrendous mistakes by Wharfedale. Dale had the courage to come back out at half time and, apart from a brief period, dominate the play. The Dale pack were awesome winning penalty after penalty at the scrum which allowed them to also dominate territory. They were also extremely efficient at the rolling maul often driving the students back 20 metres.

Dale had chances to keep the scoreboard ticking over in the first half but the usually very accurate Tom Davidson was having an off day and points were left out on the pitch.

Despite making early mistakes Dale created well in the opening exchanges and forced the students back and won a 30 metre penalty. No points but good play by the Greens. The visitors tried to get into the game and with Dale giving penalties away they soon had a 5-metre line out. A clever move at the front was spotted by Dale and the hooker was bundled into touch for a Dale line out. The defence was showing true determination and this was to carry on for the whole match.


"The boys found a way to win and showed the discipline to see it through.
The defence nearly caved when a good move by Loughborough was ended by a knock on with an overlap waiting. Dale cleared their lines but the frustrating afternoon continued. A 20 metre drive by the pack led to naught when the ball was spilled in midfield for a Loughborough penalty. Dale soon won the ball back and a surge by Ryan Carlson was followed by a run by Rhys Green and a gem of an offload to Bradley Viner. The attack was only foiled by a knock-on on Loughborough’s 22 when a break through looked likely. The Loughborough scrum were shoved backwards at the resulting scrum and the penalty awarded to Dale. Davidson slotted the kick to get the scoreboard moving.

Then Christmas came early for Loughborough and they gratefully accepted the presents to score twice in the last 10 minutes of the first half. The first try is now laughable as Dale went on to win. A quick line out was taken but the ball was then knocked on and the Dale player then uncannily just hacked at the ball – kicking it straight to Loughborough’s No 7 who was standing quietly in midfield. He caught the ball and simply passed it to his centre, George Hendy, who had an easy run to the line.

Dale had good chances to score after this but then the second big error. From a scrum just outside Loughborough’s 22 the ball was presented to the student’s winger, Will Sanders, who ran from 60 metres to score under the posts.

The Wharfedale pack grew in confidence and Ryan Carlson scored an unconverted try after a driving maul from a successful line out. Dale’s second try was awarded after a succession of penalties pinned the visitors in their 22. Yellow cards were awarded and Dale gained full reward with a penalty try to nudge into the lead by a point.

Loughborough did have a long-range penalty attempt near the end to steal the points but the attempt went wide. 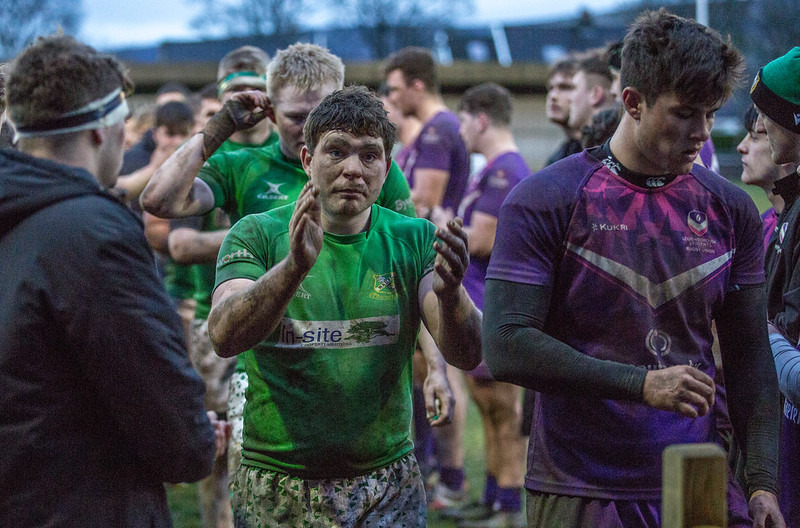 Skipper and Man of the Match Dan Stockdale leading Wharfedale off the pitch to a rousing reception
Wharfedale thoroughly deserved to win this game and should have won by a bigger margin. As it was the faithful were happy to get another win and it certainly made for enthralling viewing.

Loughborough Head Coach, Jamie Taylor, said after the game that he was “pleased with our hardiness but we need to be more accurate and disciplined around the set piece”.


Jon Feeley, Wharfedale’s Head Coach, commented:
“The improvement in our energy, attitude and commitment was noticeably better all week. I was really pleased with the raise in standards and much of it was player led.

"We gifted Loughborough two tries that were so ridiculous there was nothing to be gained from dwelling on them, so at halftime we just focused on what we needed to do to get back ahead. We found a way through an outstanding set piece game and kept the opposition scoreless.

"The boys found a way to win and showed the discipline to see it through. The support was important today, on days like this when we’re facing adversity in the form of injury and scoreboard pressure, it makes a difference”.

Dan Stockdale was awarded the Star Man on behalf of the front row and for excellent leadership.