Another thriller at the Avenue was edged by the visitors with two tries late in the game. Both teams tried to play attractive rugby when the elements allowed.


Stand in captain Josh Burridge giving a team talk before the game
Dale were pinned back in their own 22 by giving away early penalties and Stourbridge opened the scoring with a penalty kick from Fred Morgan.

Dale countered almost immediately when Rhys Green charged down a clearance kick two phases after the restart. The ball was scooped up by Simon Borrill, who took the ball forward and fed Tom Davidson. Oscar Canny then joined the attack and a well-timed and placed pass gave Rian Hamilton enough time and space to cross the whitewash. Tom Davidson made the conversion from the right-hand touch line.

Stourbridge started to gain the upper hand in possession and territory. This was helped by mistakes by Dale when they had the ball. Stourbridge also put together one or two nice handling moves that brought them close to the whitewash but no try. Another successful three points were added by Morgan before sustained pressure from Stourbridge led to two yellow cards for Dale. Two clean breaks led to tries for Stour before half time. Jo Heatley went through middle to score and Kofi Cripps added the second. Both were converted by Michael Heaney to give the visitors a 13-point lead at half time. Dale seemed to have weathered the storm after the second yellow and cleared the danger but allowed Michael Heaney to steal the ball after a line out on the blind side of the referee. No excuses though from the Dale defence for allowing Cripps through the middle. Two lapses of concentration in defence and Stourbridge took maximum points from them.


Tom Davidson with a successful touch line conversion
Wharfedale then made a nonsense of the inferiority of numbers by putting pressure on the visitor’s line. A superb Davidson touch kick, from a penalty on half way, gave Dale an attacking 5 metre line out. A second penalty led to another 5 metre lineout. This time Stour claimed the ball and soon kicked the ball dead for half time.

Dale started the second half with a try for Oliver Cicognini, again followed by a touchline conversion by Davidson. Some early pressure from Stourbridge ended with the ball being hacked downfield by Dale. An excellent kick chase from Canny and Hamilton led to Dale possession in Stourbridge territory. Good possession was moved left by the backs with Hamilton joining the line. Another accurate pass from Canny was followed by some twinkling footwork by Cicognini. Davidson added two more long penalties to bring the scores level at 20 all.

Mark Harrison and Dan Rundle scored the visitors unconverted tries in the last quarter. Harrison’s try was set up by another break in mid-field, this time Michael Penn broke through and Harrison finished off. Rundle’s try was a solo effort from deep in his own half and included a kick ahead and chase to touch down first. Dale could have grabbed a losing bonus point but a last-minute penalty kick was missed. 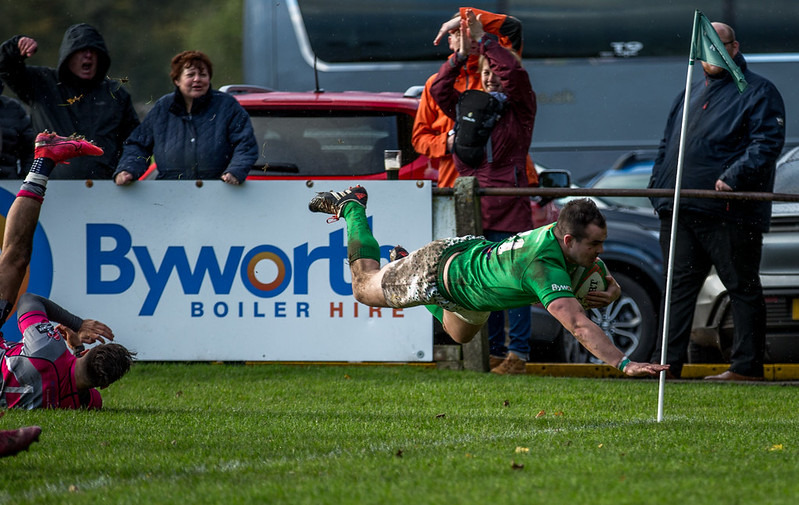 Cicognini dives in at the corner
Stourbridge Head Coach, Neil Mitchell, said after the game that it was:
“a fair contest. We did well to get five points today. There were some good individual flourishes that led to tries. We had plenty of opportunities but did not always capitalise. Wharfedale played well and maybe deserved at least a point”.

Jon Feeley, Wharfedale’s Head Coach, reflected:
“I don’t think coming away without any points is a fair reflection of the game or our effort. But our naivety in periods of the first half cost us when we needed to be more clinical in clearing our territory. But the response in the second half was excellent, to bring it back to 20 all showed significant improvement. I was disappointed our scrum did not get the rewards it should have but we didn’t allow that to distract us. Josh Burridge, supported by Matt Beesley, as vice-captain, led us superbly. And watching Oscar Canny develop into an outstanding player at 13 is exciting for the future. The ball he put across for Oliver Cicognini’s superb finish showed some skill in those conditions. Thanks to the crowd today, in that driving rain their support was huge for us and the boys appreciate it”.