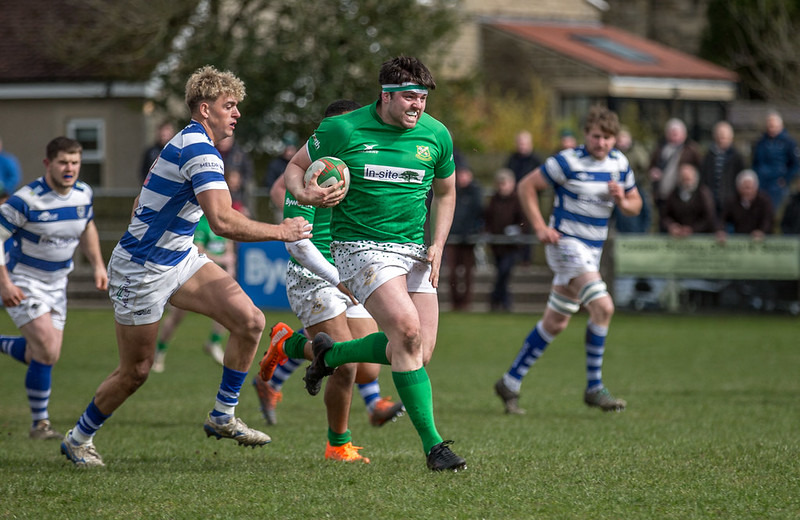 photo Ro Burridge
A feast of rugby served by the two Dales who made the best of the conditions and played attacking rugby from the outset.

Jack Blakeney Edwards for Wharfedale and Robert Parker for Tynedale traded penalties early on to leave the score tied at 6 apiece. Jack Thompson won the 1st penalty with a good jackal in the first minute and three minutes later Joe Altham burst through the defence with Omari Kaup-Samuels in support forcing the defence to slow the ball down and give a penalty away.

The two Wharfedale penalties were unfortunate but one or two mistakes had crept in to give Tynedale good field position. This period included a nice break from Harry Bullough which ended when he slipped in front of Tynedale’s fullback and was isolated.

Wharfedale scored the first try after an attacking line out. After driving forward, they moved the ball right and good hands gave Rian Hamilton space to attack the line. He stood the last man up and walked over to score. Blakeney-Edwards added the conversion.

Wharfedale had to be strong in defence and they were holding back Tynedale on the 22 as the visitors went through 9 phases.

“It had been a good game of rugby with both sides committed to play.
Madison Hunting secured a turn-over penalty and the Greens moved down field. A good nudge from Blakeney-Edwards set up the line-out in the visitor’s half. Ben Blackwell then surged through the defence before unloading to Omari Kaup-Samuels for the home side’s second try.

Blakeney-Edwards was again successful from the tee. This gave Wharfedale a 14-point lead with 5 minutes to the break. Tynedale responded on the stroke of half-time with Jay West touching down after some good handling and offloading for an unconverted try.

Tynedale carried on the good work at the start of the second half scoring two tries to take the lead. Jake Scott and Chris Wearmouth scored the tries with Parker converting the second one.

More good work from Blackwell, Ryan Carlson and Hamilton took play into the Tynedale 22 before momentarily losing the ball. Another successful jackal from Thompson won a penalty and Blakeney-Edwards levelled the score at 23 all. 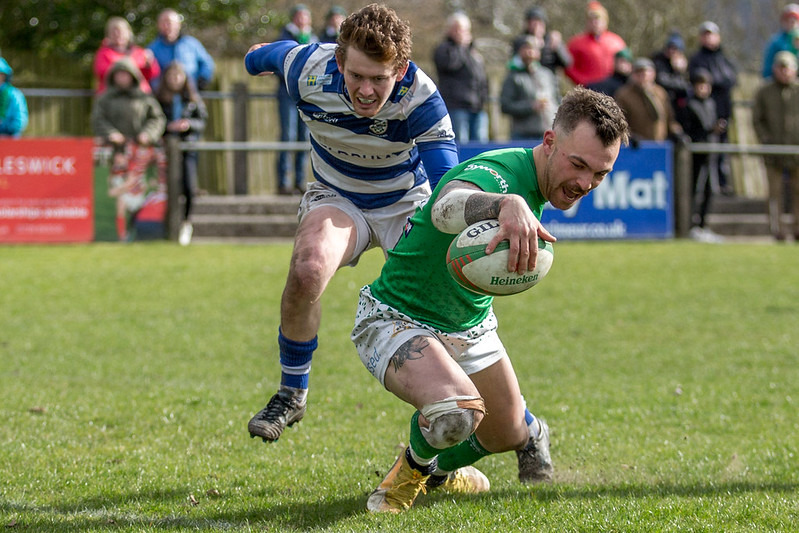 photo Ro Burridge
Hamilton scored another superb effort down the wing. Another Blakeney-Edwards conversion gave Wharfedale a 30-23 lead. This time Hamilton received the ball on his own 10-metre line and a combination of speed, swerve and footwork allowed him to race clear.

Tynedale then opened up and scored three unanswered tries with Parker converting two of them. Oliver Fletcher crossed twice and Ross Cooke added the third. This gave Tynedale a 30-42 lead.

This Green team now found themselves behind by 12 points with time running out. But they did not give up and showed great heart and courage. They finished the match with a deserved try when Madison Hunting scrambled over from close range. Blakeney-Edwards was again successful with the extras.

Tynedale took home five points and Wharfedale grabbed two with the last gasp try. Both sets of supporters had smiles as this was an enjoyable affair on a bright sunny afternoon.


Ben Woods, Tynedale Head Coach, commented:
“It had been a good game of rugby with both sides committed to play. At times it was a close affair and he was happy to end up on the winning side”.

This was a day when, with quite a few regulars missing, some new players could stake a claim to be included on a more regular basis. And they did! All the youngsters on show made significant contributions to the match. Jack Thompson got the Star Man award in the Rugby Paper but it could have gone to others.

Madison Hunting was outstanding all afternoon as was Ben Patchett at prop. Both worked tirelessly around the park with tackling, ball carrying and jackaling. One memorable moment for your scribe was the first scrum after Wharfedale had changed both props. New props George Altham and Jack Wells got a drive on and won a penalty.

In the backs both Kaup-Samuels and Owen Bullock showed their capabilities. It is also good to have both Hamilton and Blackwell in the line-up together. Both are really effective with different styles; Hamilton with speed and guile, Blackwell with speed and brute force.


Jon Feeley, Wharfedale Head Coach, reflected after the game:
“Another case of so close, something we are determined to change. The 10-minute period after half time was the difference where we were naïve in our positional play and invited pressure. But that aside there was so much to be positive about; I said in the week that having lost a number of senior leaders, new leaders would step forward.

"Josh Burridge captained the side with terrific composure, he led by example. On starting debuts, I thought Maddison Hunting and Jack Thompson were superb, challenging the ruck in defence and carrying with intent.

"And I was so pleased for Omari Kaup-Samuels to get on the scoresheet after Ben Blackwell’s brilliant break. Omari is a great character who has worked so hard to learn scrum half play in such little time. These boys are the future and I’ll be challenging them to back up this performance next week, only get over the line”

On a personal note, I must mention the officials. The match was handled superbly. Great communication at all times between the three officials and also between the referee and the players." 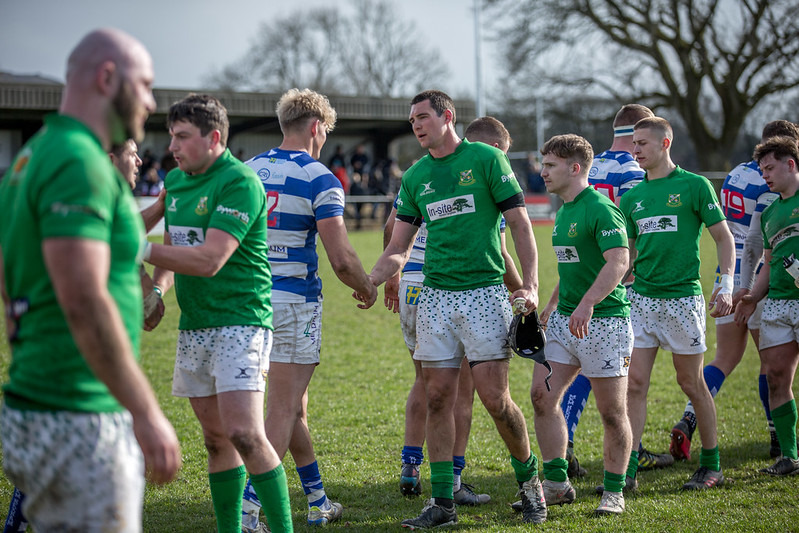