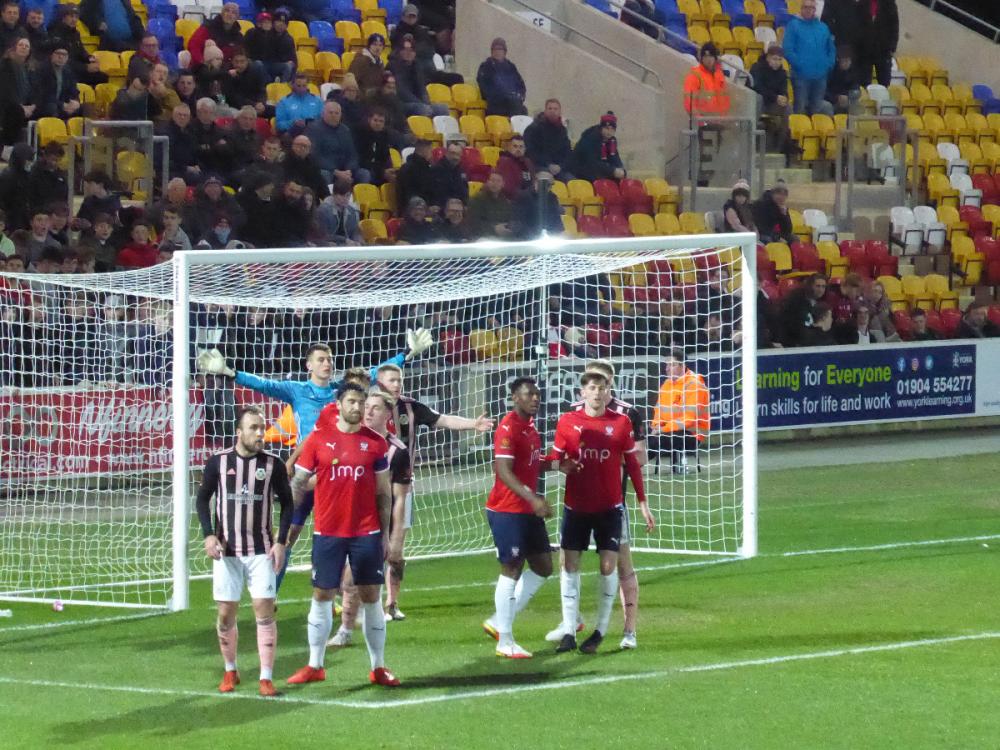 The Minstermen looked to come out on top against yet another playoff rival when they hosted Curzon Ashton on Tuesday night.

York City came into this fixture following an extraordinary ending to an FA Trophy Quarter-Final.

Clayton Donaldson equalised for City in the final seconds of their game against National League Dagenham and Redbridge, taking the game to penalties which The Minstermen went on to win, thanks to some Pete Jameson heroics.

Curzon Ashton also visited the LNER Community Stadium, after a great win on the road. It was another trip to Yorkshire for The Nash after they came out 3-2 winners at Bradford Park Avenue on Saturday. They sat in 10th, four points adrift of York, who remained in the final playoff spot.

York could have been accused of suffering from cup hangover as they allowed a couple of mistakes within the opening five minutes but it was City who had the first chance of the match, when birthday boy Matty Brown latched onto an incoming corner, unable to keep his header down.

Just minutes later, Paddy McLaughlin received the ball on the edge of the area and decided to go for the spectacular, coming very close, striking the outside of the post.

McLaughlin burst forward again, winning the ball back excellently before trying a driven shot, which took a deflection on its way out for a corner.

The Minstermen kept on pressing for that opening goal as Michael Duckworth’s rocket that looked to be heading in, couldn’t find its way through the Curzon defenders.

Duckworth then played a poaching Lenell John-Lewis in who took a touch, twisted and fired in a shot from about five yards out, but he failed to find the target.

The hosts also began the second half well, Akil Wright blasting a shot over the crossbar for the first chance.
However, York City had still failed to boast a shot on target. A Scott Barrow effort from 25 yards out drifted over the bar before Maxim Kouogun’s header went just wide of the post.

It wasn’t too long before The Minstermen did get their first shot on target - a John-Lewis strike from distance didn’t trouble the ‘keeper too much but he was forced to parry it out before smothering it.

In a slightly underwhelming second half, City fans brought the atmosphere as their side went close through Olly Dyson’s chipped ball, which was somehow scrambled off the line.

In the penultimate minute of the game, Barrow’s first time cross found the head of John-Lewis but it ended up being easy work for Renshaw, who caught it with no complications at all.

In what was a frustrating affair for York City, they took just a point away whilst going 11 unbeaten, despite having most of the ball and Curzon not even getting the slightest sniff of goal.

City travel to Southport in their next game on Saturday 19th March, where they will look to further extend their unbeaten run.