Today we witnessed the first ever Formula 1 Grand Prix to be held in Florida, USA and come the chequered flag at the all-new Miami International Autodrome in the grounds of the Hard Rock Stadium it was Red Bull’s Max Verstappen who claimed the victory spoils. 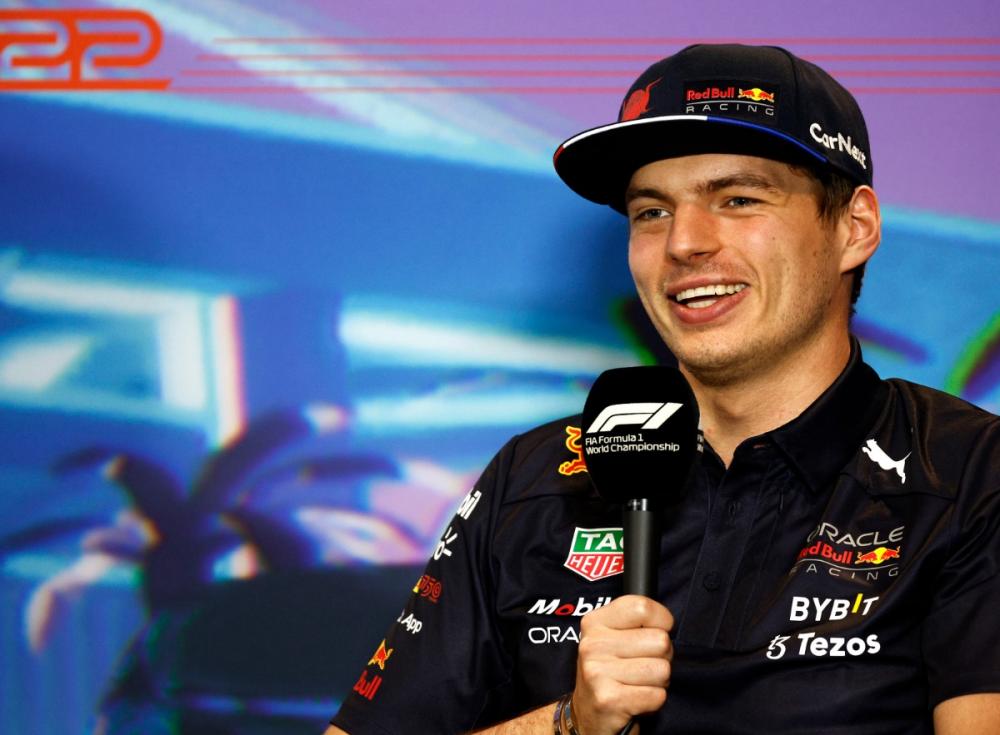 The Miami GP winner’s trophy was earned by Red Bull’s Max Verstappen
Work on the street circuit and its infrastructure had only begun in April of last year, but a tremendous effort resulted in the ontime delivery of the facility. A total of 24,000 tons of a special asphalt comprised of a unique combination of Georgia granite and Florida lime rock had been used to create the track, which features a mix of high speed straights and more challenging curves. Unfortunately a few small areas of damage to the surface emerged last Thursday evening at Turns 7 and 17 following use of the circuit by the Safety and Medical Cars plus some supercars giving demonstration runs. Repairs were completed the next morning before any F1 cars headed into action, with further resurfacing at Turn 17 following at the end of the day. With fun in mind and perhaps as a little joke at Monaco’s expense, a false marina was also created at the venue, featuring a solid blue surface but with ten yachts positioned near the inside of Turns 6, 7 and 8. Plenty of glitz and glamour as well as decent racing action were the key objectives for the organisers, even if ticket prices were hardly cheap.

After all the leading contenders had stopped to switch from medium to hard specification tyres Verstappen held a 7.5 second lead over Leclerc, with Sainz and Pérez still the best of the rest.
On a more serious note, there had been a recent issue when on 1 March a group of local residents had begun a lawsuit against the holding of the event, claiming that it would “cause severe disruption and physical harm.” However, a local judge requested that evidence be produced as to why they would “suffer actual injury” and subsequently dismissed their objection, explaining that “any potential harm is avoidable.” Organisers of the event had already taken measures to limit noise and baffle sound levels at the northern side of the circuit closest to residential areas.
2022 Formula 1 Miami Grand Prix

The latter mainly impacts Sir Lewis Hamilton, who has long worn items such as earrings and nose studs and has been openly refusing to comply with the related FIA regulation. On Friday he threatened to pull out of the Miami event if the FIA insisted on him removing his jewellery, but soon backtracked and agreed to remove whatever items he could when in the car this weekend, with FIA officials allowing him until Monaco later this month to deal with two other less readily removable items, namely his nose stud and another whose location he is unwilling to reveal. However, Hamilton’s stance then hardened again, with him declaring that his nose stud would never be removed. It all feels like an unnecessary public squabble between the multiple champion and the sport’s governing body and it is very ironic that Mercedes, who successfully campaigned to have Race Director Michael Masi removed from his job after Abu Dhabi at the end of last season for not rigorously applying FIA regulations, is now asking his replacement to not rigorously apply a different regulation. All eyes will be on Hamilton come Monaco to see if he abides by the regulation or chooses to continue the standoff. 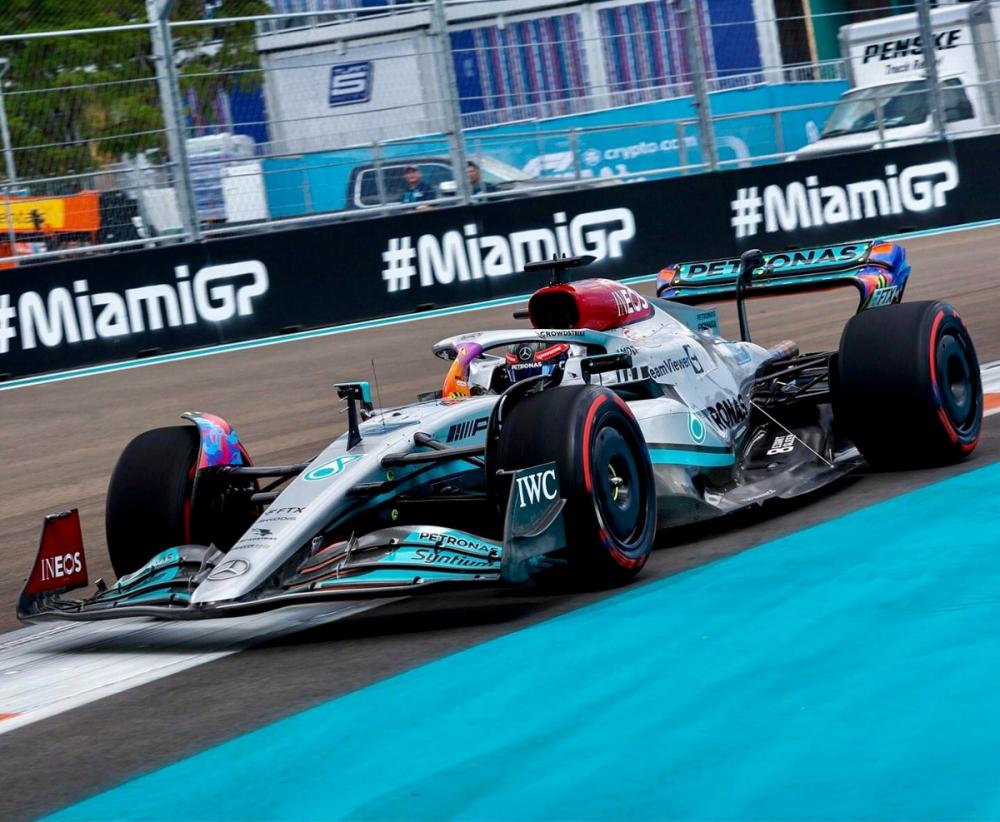 George Russell finished fifth, one place ahead of his Mercedes team-mate Lewis Hamilton
In other news, Formula 1 received a welcome boost last week to its already flourishing health when the chief executive of the Volkswagen Group, Herbert Diess, announced that its board of directors had concluded that it intends for its Porsche and Audi brands to enter F1 when the new engine regulations arrive in 2026, stating that they felt they would derive more revenue and increase their image by competing in the sport rather than remaining absent. Porsche is likely to team up with the Red Bull team, whilst Audi is in discussions with various other existing outfits. It has also been revealed that F1 and its co-organisers of next year’s Las Vegas Grand Prix have overcome the issue of finding space close to the famous Strip for the pits, race paddock and other facilities by purchasing a nearby 39 acre site for US$240 million.

Turning back to Miami, both of F1’s new race directors, Niels Wittich and Eduardo Freitas, had tested positive for COVID-19 shortly after the previous round at Imola, but Freitas was never due to head to Florida as the Portuguese official was already committed to be on duty at this weekend’s World Endurance Championship event at Belgium’s Spa Francorchamps circuit. Fortunately Wittich had time to recover and register a negative test result before travelling to the USA earlier this week.

Ahead of the cars venturing out onto the circuit for the first time on Friday the teams’ strategists had all been busy assessing the potential implications of the pit lane time loss being less than at some other tracks, increasing the possibility of multiple stops. Also, with temperatures set to be in the low 30s and with high humidity, there would be a constant threat of rain plus thunderstorms and lightning to affect proceedings. 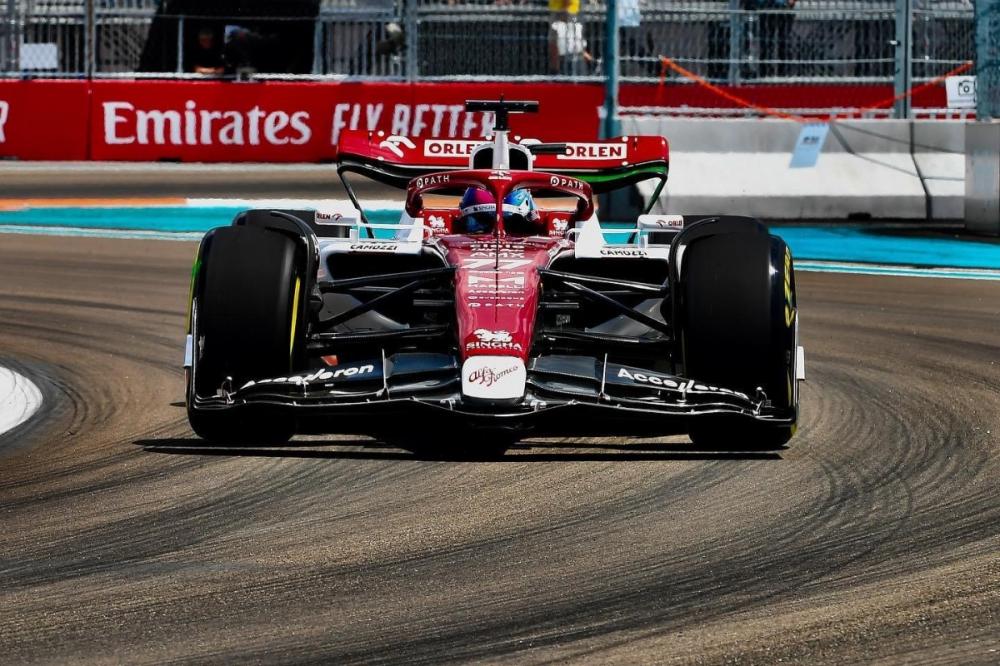 Alfa Romeo’s Valtteri Bottas again outqualified both Mercedes cars before finishing seventh in the race
Come Friday’s first practice session, which was interrupted after Valtteri Bottas had crashed his Alfa Romeo at Turn 7, it was the Drivers’ Championship leader Charles Leclerc who led the way at the top of the timesheets in his Ferrari ahead of George Russell for Mercedes and Verstappen, with Russell’s Mercedes team-mate Hamilton only eighth. Red flags also flew twice in the second practice period after Carlos Sainz lost the rear of his Ferrari at the fast Turn 13 lefthander and hit the wall and then the Williams of Nicholas Latifi ground to a halt without drive late on. There was another strong performance from Russell though as the young British driver went quickest ahead of Leclerc, Red Bull’s Sergio Pérez and Hamilton, but it was important to remember that this was only second practice and the Mercedes times could be deceptive. In contrast, various technical woes left Verstappen failing to set a time. In yesterday’s final practice session a hefty shunt at Turn 13 for Alpine’s Esteban Ocon caused more red flags before Mercedes struggled with both cars languishing near the bottom of the timings, whilst Pérez, Leclerc and Verstappen went fastest.

Come the all-important qualifying session yesterday afternoon US time it was the Ferrari duo of Leclerc and Sainz who led the way ahead of the Red Bulls of Verstappen and Pérez, with Bottas and Hamilton completing the top six and Russell only 12th. Bottas, dropped by Mercedes’ at the end of last season, quietly enjoyed outqualifying both Silver Arrows cars for a second race in a row. Today’s Grand Prix was scheduled to start at 15.30 local time, which due to the time difference equated to 20.30 in the UK and an hour later for many European audiences, and there was a tangible sense of anticipation in the sell-out crowd as the start neared. Amongst the drivers though there was a real sense of caution about the lack of grip available away from the rubbered-in racing line, with concerns about potential collisions at Turn 1 on the opening lap and the dangers of moving off-line to overtake.

After an upbeat and largely successful inaugural event in Miami it’s now time for the F1 circus to relocate back to Europe for a trio of Grands Prix in Spain, Monaco and Azerbaijan before popping back across the Atlantic for the Canadian race in Montreal.
A last minute fuel temperature issue meant that both Aston Martins had to start from the pit lane rather than the grid, but at the front of the field when those famous red lights went out it was Leclerc and Verstappen who made the best starts as the Red Bull team leader quickly got the better of Sainz at the opening righthander. On lap nine the Dutch reigning champion went one better as he swept past Leclerc into the lead up the inside at Turn 1 and set about extending his advantage, whilst Sainz held third position ahead of the chasing Pérez. 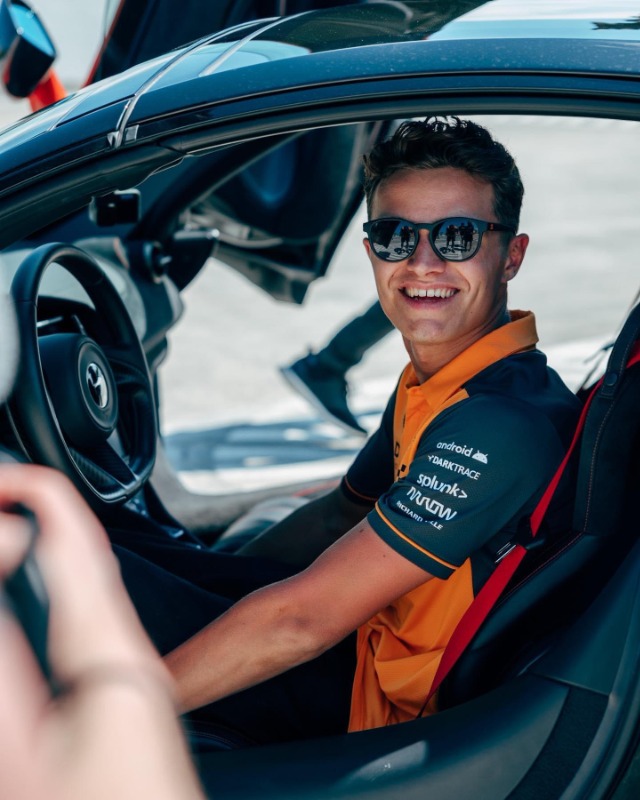 Lando Norris enjoyed scaring a few privileged McLaren guests on track before concentrating on his race weekend
After all the leading contenders had stopped to switch from medium to hard specification tyres Verstappen held a 7.5 second lead over Leclerc, with Sainz and Pérez still the best of the rest. Russell, who had started on hard tyres, was running fifth, but had yet to stop. On lap 41 Pierre Gasly’s AlphaTauri made contact with Lando Norris’ McLaren, immediately putting the young British driver out of the race, and a Virtual Safety Car period soon became a full Safety Car intervention to enable the damaged car and debris to be cleared from the circuit. Russell had gambled on delaying his pit stop in the hope of such circumstances reducing the time deficit involved and quickly pitted to change to medium rubber. 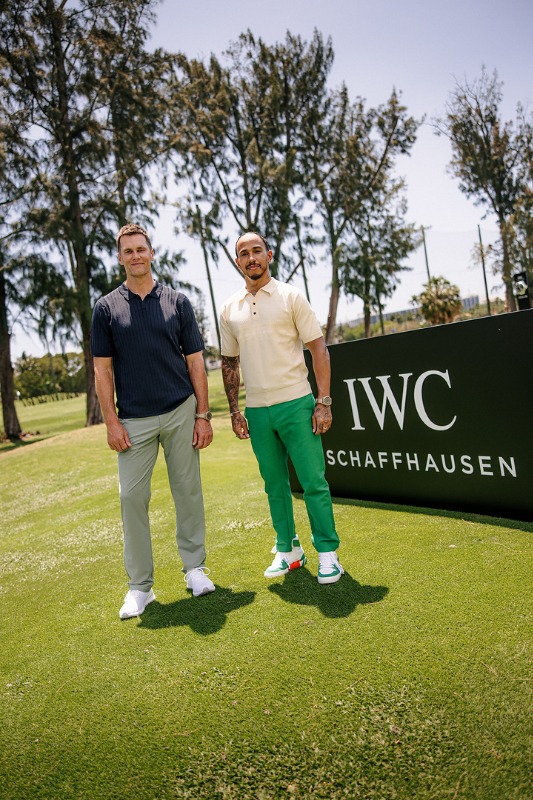 Racing resumed at the start of lap 47 and a rejuvenated Leclerc applied real pressure to the leading Verstappen, just as Pérez did to Sainz, but come the chequered flag there had been no changes of position and Verstappen, Leclerc and Sainz made up the podium trio. The Red Bull winner also claimed the extra point for the fastest lap of the Grand Prix. The two Mercedes cars completed the top sextet of finishers, with Russell getting the better of Hamilton in the closing stages.

After an upbeat and largely successful inaugural event in Miami it’s now time for the F1 circus to relocate back to Europe for a trio of Grands Prix in Spain, Monaco and Azerbaijan before popping back across the Atlantic for the Canadian race in Montreal. Formula 1 appears to be in rude health on so many fronts and the next steps in this intriguingly unpredictable season are eagerly awaited.