Memories Of A Cycling Holiday In 1950s Norway

Maurice Hall and Pete Lumb were members of a cycling club in York. In 1952 they decided to leave Yorkshire behind and cycle across Norway, as Maurice recalls in his account of their trip.

We had no real idea of what lay ahead when my friend Pete Lumb and I embarked on our trip to Norway on 2nd August 1952. It was barely seven years after the end of the World War II and travelling abroad was still considered something of an adventure.

We sailed from Newcastle to Bergen overnight on the MS Venus. By 4pm the following day we were riding our bikes out of the town in search of our first B&B for the night, which we found in Gullbotn. The next morning we climbed the Tokojelt Pass, which was really hard work, and dropped down the other side to the Hardangerfjord where we were confronted by pipelines dropping down from the glacier high above providing power for a hydroelectric plant at Ålvik. 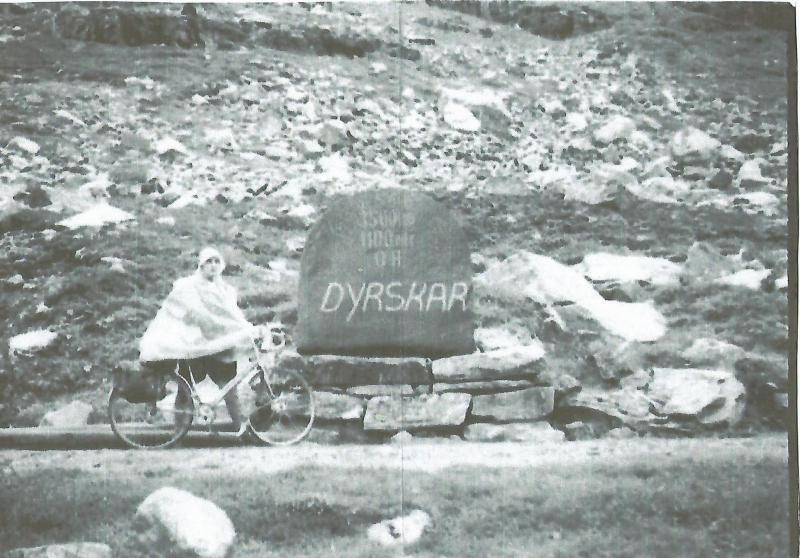 After another steep but rewarding climb the next morning up the Seljestad we had little time to recover before a 5pm start up our second mountain pass of the day - the 3,500ft climb up the Dyrskard. Once over the top it was time to look for somewhere for the night. The only place we could find was a mountain refuge with no running water and no electricity. We even had to borrow a candle to light our bedroom.


Our mountain hut
The following morning we set off downhill in search of breakfast. We were made very welcome at the Botn Hotel where all the guests spoke in English for our benefit. Later we stopped to help two girls mend a puncture. Unfortunately, they were going in the opposite direction as a spot of female company would have been very welcome.

Later that day we encountered our stiffest climb yet. This was the first time we had to get off and walk. We covered the next 13 miles in three hours (good going on 1950s Norwegian roads) and mended a broken spoke in Pete’s back wheel before staying the night in another very good pensjonat.

We were now nearing the midpoint of our holiday and our plan was to reach Oslo in time for the weekend. Along the way we passed the Vemork hydroelectric plant near Rjukan. This was the scene of one of the most daring commando raids of WWII when Norwegian saboteurs trained by the Special Operations Executive destroyed the heavy water plant at the facility (the film The Heroes of Telemark is based on this event).

The following day we carried on towards the capital. Tarmac was a luxury in those days and I can remember seeing tractors scraping the surface of the roads to fill in the potholes. Unable to find accommodation before Oslo, we carried on into the city and finally arrived in the outskirts at around 9:30pm. 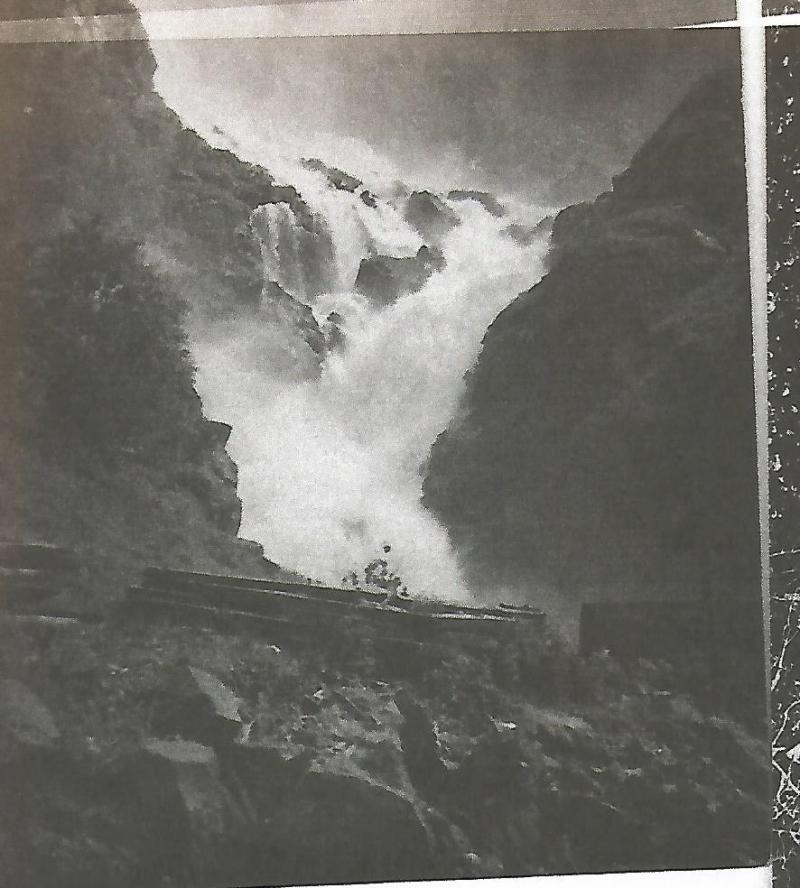 We were unable to find our landlady in the morning so we left 10kr on the dressing table and went in search of breakfast. Post-war Oslo wasn’t the most exciting place to spend a rainy day, but we made the most of it. The Town Hall, I remember, had a giant mural made up of nails driven in at different lengths.

I rode out of town to see the nearby Olympic ski jump. To stand at the top and look out into space makes you realise how brave the people who attempt it are – I always had a lot of respect for Eddie the Eagle having done that!

Two days in Oslo was enough, so the following morning we will hit the road back to Bergen. This section of the journey would see us use three means of transport, namely bike, train and ferry. The first nine miles was all uphill and the road was bad, so we could only manage about 5mph. The rain started in earnest and as the day progressed we got wetter and wetter despite having bought new capes. For a while it seemed like fate was conspiring against us; my pannier strap broke and my gear change took a spoke out of my back wheel. Unable to find digs in Gulsvick we took the train to Nesbyen to stay the night in another pensjonat.

The first task of the morning was to repair my gear change and the broken spoke. This took longer than expected and I finished up being unable to use my two lowest gears. At least the sun was out and we climbed steadily all day to over 3,000ft. At 7pm we sat down to a well-deserved supper in Ustaoset.

Our objective for the next day was to take the train to Myrdal which meant a short ride to the railway station at Haugastøl. To our amazement, the train was 15 minutes early (even in those days a prompt, reliable service was a shock to anyone used to British railways!) This section of the Oslo to Bergen railway was high up in the mountains and, in places, it passed through wooden tunnels to keep the line free from snow in winter.

Arriving in Myrdal, some 2,840ft above sea level, we admired the monument to Scott of The Antarctic who trained in these mountains prior to his ill-fated expedition of 1910. We were at the top of the Flåm valley and the ride down the hairpins was so steep on the bends that we had to sit on the back wheel to avoid going over the handlebars.

From there, we took a three hour ride on the ferry to Gudvangen. The passengers onboard included a Thomas Cook tour and I talked to a New Zealander who we bumped into again the following day outside the Stalheim Hotel, which still stands today. We were the last to leave the boat after helping to unload the hold as our bikes were down there. We then sprinted into Gudvangen to find accommodation for the night.

During the night there was a strange episode where we were awoken by the sound of screaming, but it turned out to be someone having a nightmare. That wasn’t the most auspicious start, but our ride into Voss the following morning was very pleasant and allowed us to cash our last traveller’s cheques at the bank. At the end of the road in Evanger we caught the train to Trengereid in order to spend the night in Gullbotn.

The final day brought an easy ride into Bergen. The Venus did not sail until late in the afternoon so we had time to take the funicular to the top of Mount Fløyen. The view out over Bergen is spectacular. Back in town we spent our time sightseeing and shopping, before we boarded ship for the journey back to Newcastle.

It’s strange to think that all of this took place nearly 70 years ago. I have since been back to Norway. The roads are now all tarmacked to a very high standard. Many of the mountain passes have been bypassed by tunnels through the mountains (the longest one we drove through was 13 miles long and took three years to build). A lot has changed, but it remains a fantastic country and a great place to explore.

This article was written by Maurice Hall.